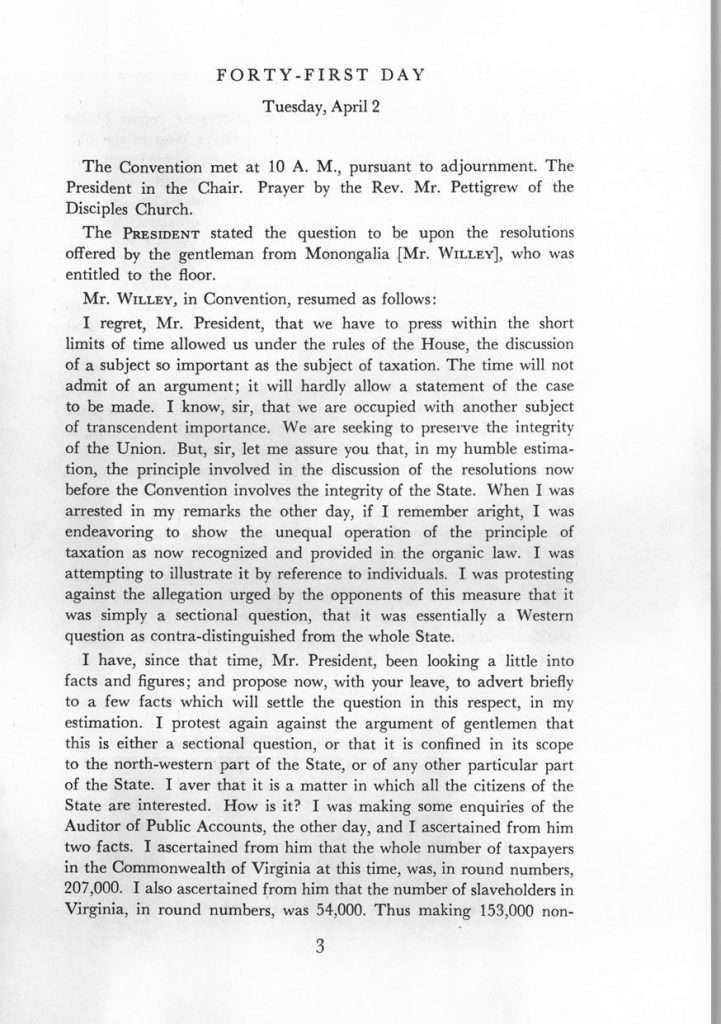 Proceedings of the Virginia State Convention of 1861, Volume 3, Page 3

I regret, Mr. President, that we have to press within the short limits of time allowed us under the rules of the House, the discussion of a subject so important as the subject of taxation. The time will not admit of an argument; it will hardly allow a statement of the case to be made. I know, sir, that we are occupied with another subject of transcendent importance. We are seeking to preserve the integrity of the Union. But, sir, let me assure you that, in my humble estimation, the principle involved in the discussion of the resolutions now before the Convention involves the integrity of the State. When I was arrested in my remarks the other day, if I remember aright, I was endeavoring to show the unequal operation of the principle of taxation as not recognized and provided in the organic law. I was attempting to illustrate it by reference to individuals. I was protesting against the allegation urged by the opponent of this measure that it was simply a sectional question, that it was essentially a Western question as contra-distinguished from the whole State.

I have, since that time, Mr. President, been looking a little into facts and figures; and propose now, with your leave, to advert briefly to a few facts which will settle the question in this respect, in my estimation. I protest again against the argument of gentlemen that this is either a sectional question, or that it is confined in its scope to the north-western part of the State, or of any other particular part of the State. I aver that it is a matter in which all the citizens of the State are interested. How is it? I was making some enquiries of the Auditor of Public Accounts, the other day, and I ascertained from him two facts. I ascertained from him that the whole number of taxpayers in the Commonwealth of Virginia at this time, was, in round numbers, 207,000. I also ascertained from him that the number of slaveholders in Virginia, in round numbers, was 54,000. Thus making 153,000 non- 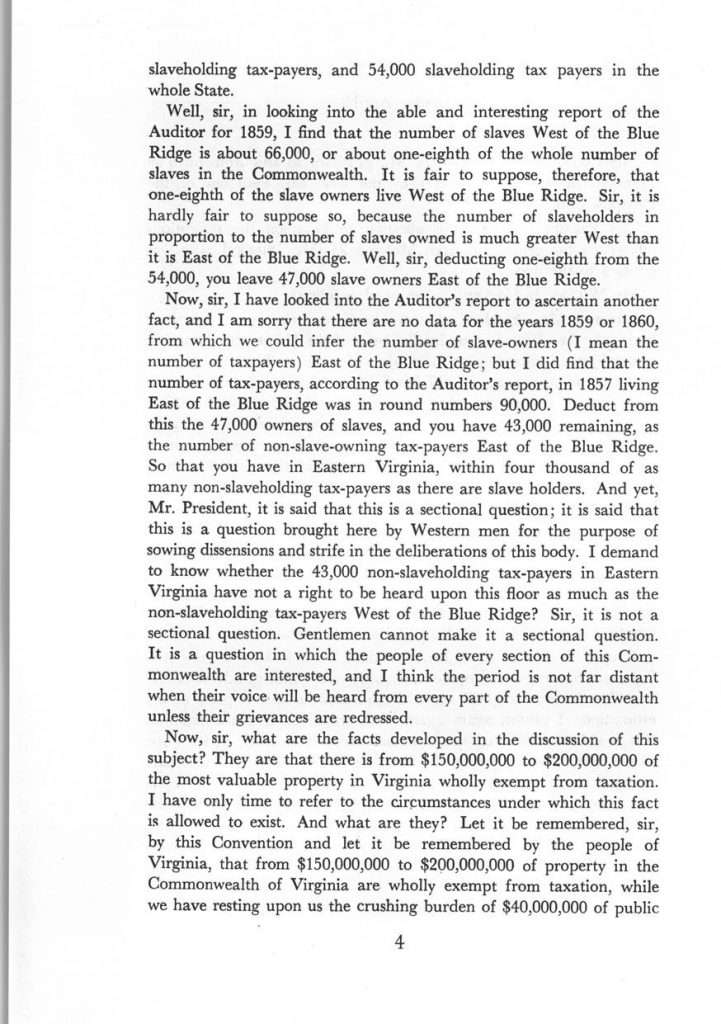 Proceedings of the Virginia State Convention of 1861, Volume 3, Page 4

Now, sir, I have looked into the Auditor’s report to ascertain another fact, and I am sorry that there are no data for the years 1859 or 1860, from which we could infer the number of slave-owners (I mean the number of taxpayers) East of the Blue Ridge; but I did find that the number of tax-payers, according to the Auditor’s report, in 1857 living East of the Blue Ridge was in round numbers 90,000. Deduct from this the 47,000 owners of slaves, and you have 43,000 remaining, as the number of non-slaveholding tax-payers East of the Blue Ridge. So that you have in Eastern Virginia, within four thousand of as many non-slaveholding tax-payers as there are slave holders. And yet, Mr. President, it is said that this is a sectional question; it is said that this is a question brought here by Western men for the purpose of sowing dissensions and strike in the deliberations of this body. I demand to know whether the 43,000 non-slaveholding tax-payers in Eastern Virginia have not a right to be heard upon this floor as much as the non-slaveholding tax-payers West of the Blue Ridge? Sir, it is not a sectional question. Gentlemen cannot make it a sectional question. It is a question in which people of every section of this Commonwealth are interested, and I think the period is not far distant when their voice will be heard from every part of the Commonwealth unless their grievances are redressed.

Now, sir, what are the facts developed in the discussion of this subject? They are that there is from $150,000,000 to $200,000,000 of the most valuable property in Virginia wholly exempt from taxation. I have only time to refer to the circumstances under which this fact is allowed to exist. And what are they? Let it be remembered, sir, by this Convention and let it be remembered by the people of Virginia, that from $150,000,000 to $200,000,000 of property in the Commonwealth of Virginia are wholly exempt from taxation, while we have resting upon us the crushing burden of $40,000,000 of public 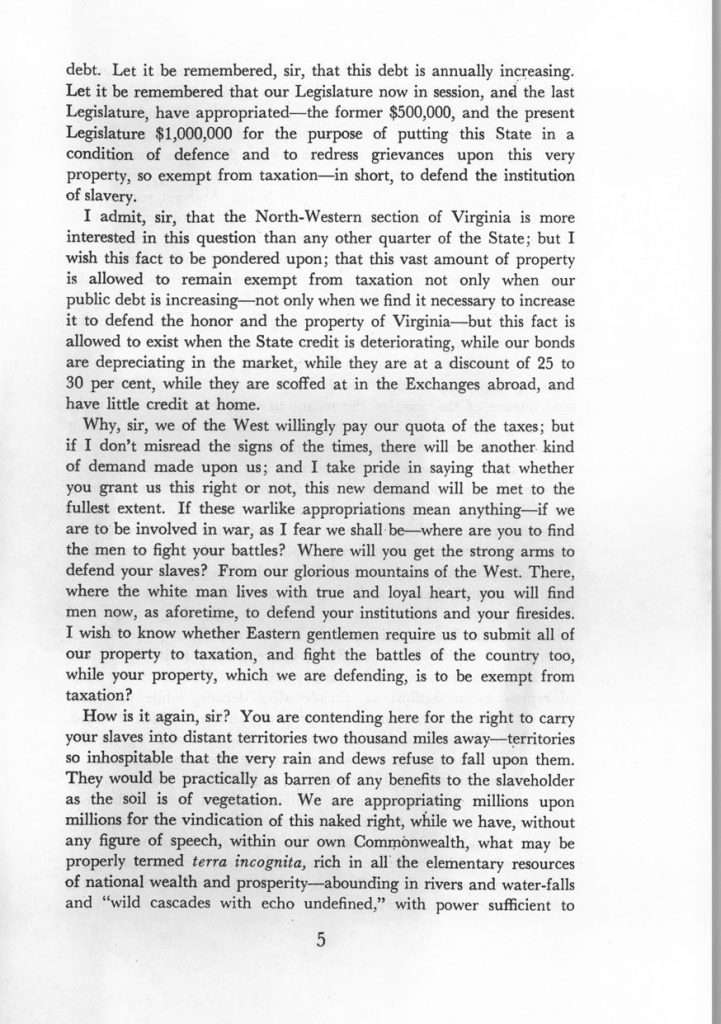 Proceedings of the Virginia State Convention of 1861, Volume 3, Page 5

debt. Let it be remembered, sir, that this debt is annually increasing. Let it be remembered that our Legislature, now in session, and the last Legislature, have appropriated—the former $500,000, and the present Legislature $1,000,000 for the purpose of putting this State in a condition of defence and to redress grievances upon this very property, so exempt from taxation—in short, to defend the institution of slavery.

I admit, sir, that the North-Western section of Virginia is more interested in this question than any other quarter of the State; but I wish this fact to be pondered upon; that this vast amount of property is allowed to remain exempt from taxation not only when our public debt is increasing—not only when we find it necessary to increase it to defend the honor and the property of Virginia—but this fact is allowed to exist when the State credit is deteriorating, while our bonds are depreciating in the market, while they are at a discount of 25 to 30 per cent, while scoffed at in the Exchanges abroad, and have little credit at home.

Why, sir, we of the West willingly pay our quota of the taxes; but if I don’t misread the signs of the times, there will be another kind of demand made upon us; and I take pride in saying that whether you grant us this right or not, this new demand will be met to the fullest extent. If these warlike appropriations mean anything—if we are to be involved in war, as I fear we shall be—where are you to find the men to fight your battles? Where will you get the strong arms to defend your slaves? From our glorious mountains of the West. There, where the white man lives with true and loyal heart, you will find men now, as aforetime, to defend your institutions and your firesides. I wish to know whether Eastern gentlemen require us to submit all of our property to taxation, and fight the battles of the country too, while your property, which we are defending, is to be exempt from taxation?

How is it again, sir? You are contending here for the right to carry your slaves into distant territories two thousand miles away—territories so inhospitable that the very rain and dews refuse to fall upon them. They would be practically barren of any benefits to the slaveholder as the soil is of vegetation. We are appropriating millions upon millions for the vindication of this naked right, while we have, without any figure of speech, within our own Commonwealth, what may be properly termed terra incognita, rich in all the elementary resources of national wealth and prosperity—abounding in rivers and water-falls and “wild cascades with echo undefined,” with power sufficient to 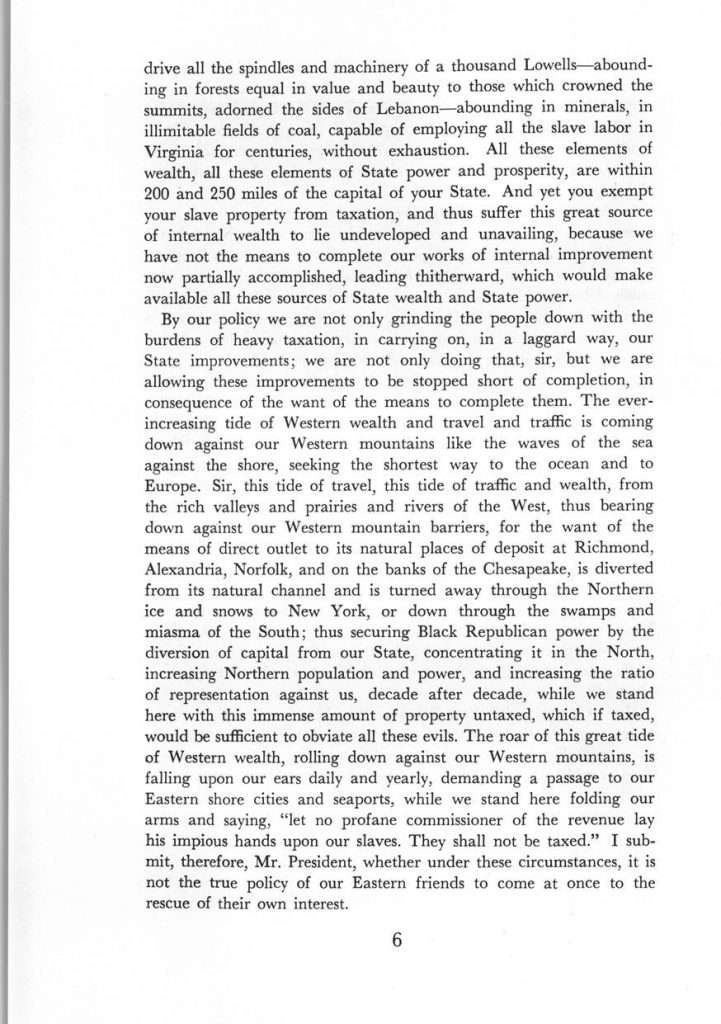 Proceedings of the Virginia State Convention of 1861, Volume 3, Page 6

drive all the spindles and machinery of a thousand Lowells—abounding in forests equal in value and beauty to those which crowned the summits, adorned the sides of Lebanon—abounding in minerals, in illimitable fields of coal, capable of employing all the slave labor in Virginia for centuries, without exhaustion. All these elements of wealth, all these elements of State power and prosperity are within 200 and 250 miles of the capital of your State. And yet you exempt your slave property from taxation, and thus suffer this great source of internal wealth to lie undeveloped and unavailing, because we have not the means to complete our works of internal improvement now partially accomplished, leading thitherward, which would make available all these sources of State wealth and State power.

By our policy we are not only grinding the people down with the burdens of heavy taxation, in carrying on, in a laggard way, our State improvements; we are not only doing that, sir, but we are allowing these improvements to be stopped short of completion, in consequence of the want of the means to complete them. The ever-increasing tide of Western wealth and travel and traffic is coming down our Western mountains like the waves of the sea against the shore, seeking the shortest way to the ocean and to Europe. Sir, this tide of travel, this tide of traffic and wealth, from the rich valleys and prairies and rivers of the West, thus bearing down our Western mountain barriers, for the want of the means of direct outlet to its natural places of deposit at Richmond, Alexandria, Norfolk, and on the banks of the Chesapeake, is diverted from its natural channel and is turned away through the Northern ice and snows to New York, or down through the swamps and miasma of the South; thus securing Black Republican power by the diversion of capital from our State, concentrating it in the North, increasing Northing population and power, and increasing the ratio of representation against us, decade after decade, while we stand here with this immense amount of property untaxed, which if taxed, would e sufficient to obviate all these evils. The roar of this great tide of Western wealth, rolling down against our Western mountains, is falling upon our ears daily and yearly, demanding a passage to our Eastern shore cities and seaports, while we stand here folding our arms and saying, “let no profane commissioner of the revenue lay his impious hands upon our slaves. They shall not be taxed.” I submit, therefore, Mr. President, whether under these circumstances, it is not the true policy of our Eastern friends to come at once to the rescue of their own interest. 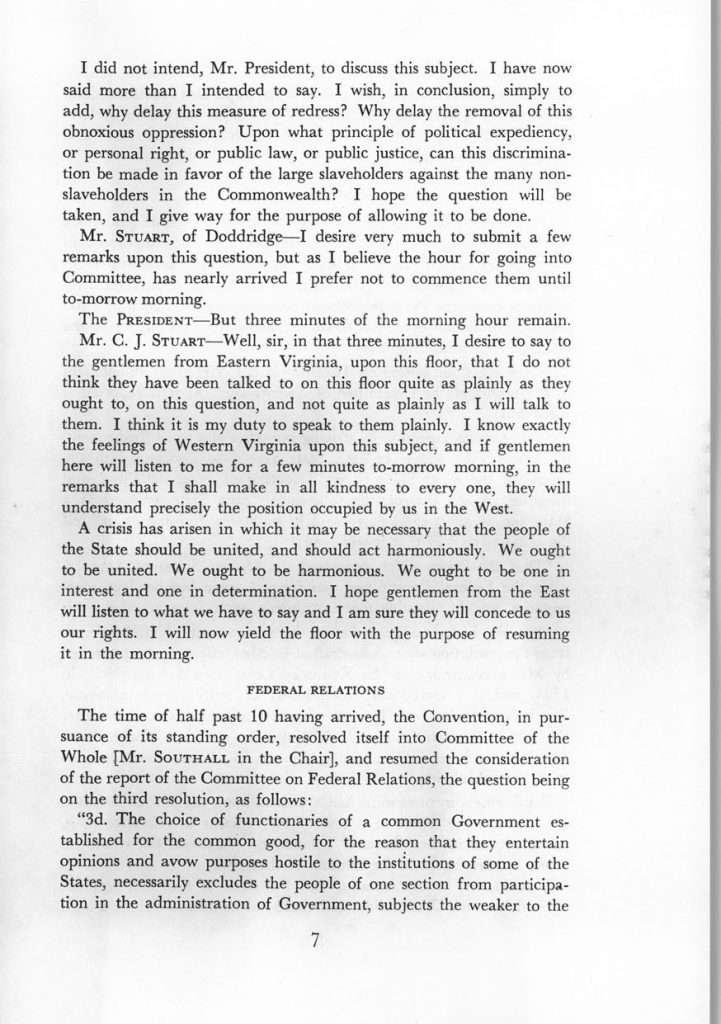 Proceedings of the Virginia State Convention of 1861, Volume 3, Page 7

I did not intend, Mr. President, to discuss this subject. I have now said more than I intended to say. I wish, in conclusion, simply to add, why delay this measure of redress? Upon what principle of political expediency, or personal right, or public law, or public justice, can this discrimination be made in favor of the large slaveholders against the many nonslaveholders in the Commonwealth? I hope the question will be taken, and I give way for the purpose of allowing it to be done.

RELATED CONTENT
Categories:
Type:
MAP
TIMELINE
April 2, 1861
Waitman Wiley, a delegate to the Secession Convention from Monongalia County, aruges for equal taxation of all property in Virginia.
CITE THIS ENTRY