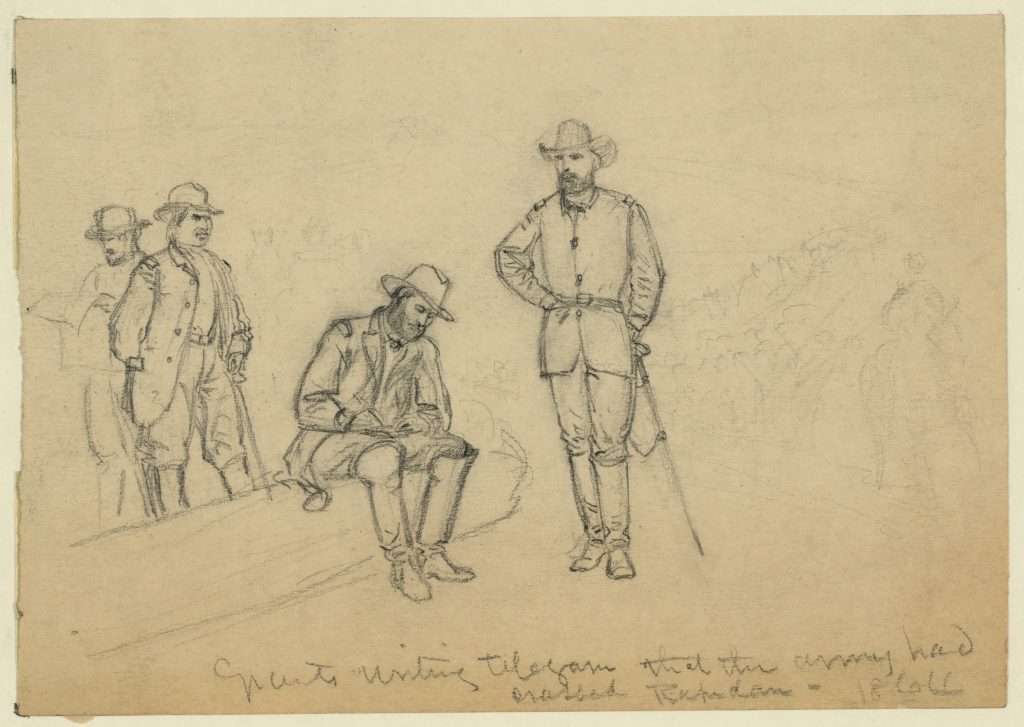 Grant Writing Telegram That the Army Had Crossed the Rapidan

After a number of important victories in the Western Theater, including at Shiloh (1862), Vicksburg (1863), and Chattanooga (1863), United States president Abraham Lincoln brought Ulysses S. Grant east and placed him in charge of all the Union armies. Rather than command from Washington, D.C., however, Grant headquartered himself with the Army of the Potomac, the Union’s largest but least successful army, and instructed its commander, George G. Meade: “Wherever Lee goes, there you will go also.” This was new for the Union army, which had previously identified its goal not as the Confederate army but the Confederate capital, Richmond. Fearing he wouldn’t be reelected in the fall without a significant military victory, Lincoln had instructed Grant to seek out and destroy Lee. By his lights, caution and indecision had been the Army of the Potomac’s watchwords since the days of George B. McClellan; he hoped that Grant would finally bring him results.

Unlike Ambrose E. Burnside and Joe Hooker before him, Grant left the Army of the Potomac’s organization and command largely as he found it. He did appoint Philip H. Sheridan to lead the cavalry corps, and assigned James H. Wilson, a topographical engineer and former member of Grant’s staff, to command a 3,500-man cavalry division. Grant also instructed Burnside’s Ninth Corps, which had been fighting in the West, to rejoin the Army of the Potomac, boosting Union force strength to 118,000, compared with Lee’s 65,000.

Stephen Cushman Discusses the Battle of the Wilderness
Grant’s army began crossing the Rapidan River on Wednesday, May 4, 1864—the Second Corps under Winfield Scott Hancock at Ely’s Ford, and Gouverneur Warren’s Fifth Corps and John Sedgwick’s Sixth Corps both at Germanna’s Ford—and that night slowly converged around the Wilderness Tavern. Just to the west lay Lee’s veteran army, heavily outnumbered and its leadership less certain than in the past. While James Longstreet ably commanded the First Corps, Richard S. Ewell and A. P. Hill, promoted to head the Second and Third corps respectively, were not as reliable. Lee hoped to offset these disadvantages by ensnaring Grant in the brambles of the Wilderness. He was assisted by James Wilson’s Union cavalry, which did not properly picket the roads. As morning dawned on May 5, Grant’s men had no idea that the Army of Northern Virginia was waiting to pounce.

Union infantrymen in Charles Griffin’s division of Warren’s corps were waiting for their turn to march along the Orange Turnpike when Ewell’s Confederates swarmed out of the woods near a clearing called Saunders Field. With his cavalry already engaged, Grant ordered Warren’s troops to attack “immediately without taking time for dispositions.” This, too, was new for the Army of the Potomac, which was accustomed to ponderously and methodically arranging itself before launching an attack. Perhaps that’s why, in spite of the general-in-chief’s orders, several critical hours passed before the infantry made their assault. And when they finally did, only three of the corps’s five divisions had reached their positions. (To be fair, one of them, under the Pennsylvania surgeon Samuel W. Crawford, was late because of the surprise appearance of A. P. Hill’s Confederates on the Orange Plank Road, about two and a half miles south of the turnpike.)

When Warren’s men finally attacked about one o’clock, they marched across Saunders Field, Higgerson Field just to the south, and the woods in between. Griffin’s men fared particularly well at Saunders Field, but the Confederate position overlapped the Union right, and Ewell’s reserves had a habit of showing up at the right place and at the right time. Griffin needed reinforcements and was not receiving them. Frustrated, he stormed to the rear, where he found Meade and erupted into a rant witnessed by Grant. (“The air was full of God-damns,” the historian Shelby Foote has written in one of many embellishments of this famous incident.) Not quite catching Griffin’s name, Grant proclaimed, “Who is this General Gregg? You ought to arrest him!” Meade calmly responded, “It’s Griffin, not Gregg, and it’s only his way of talking.” (Griffin was a popular Regular Army veteran whose classmates at West Point had included Confederate generals Hill and Henry Heth and Union general Burnside.) 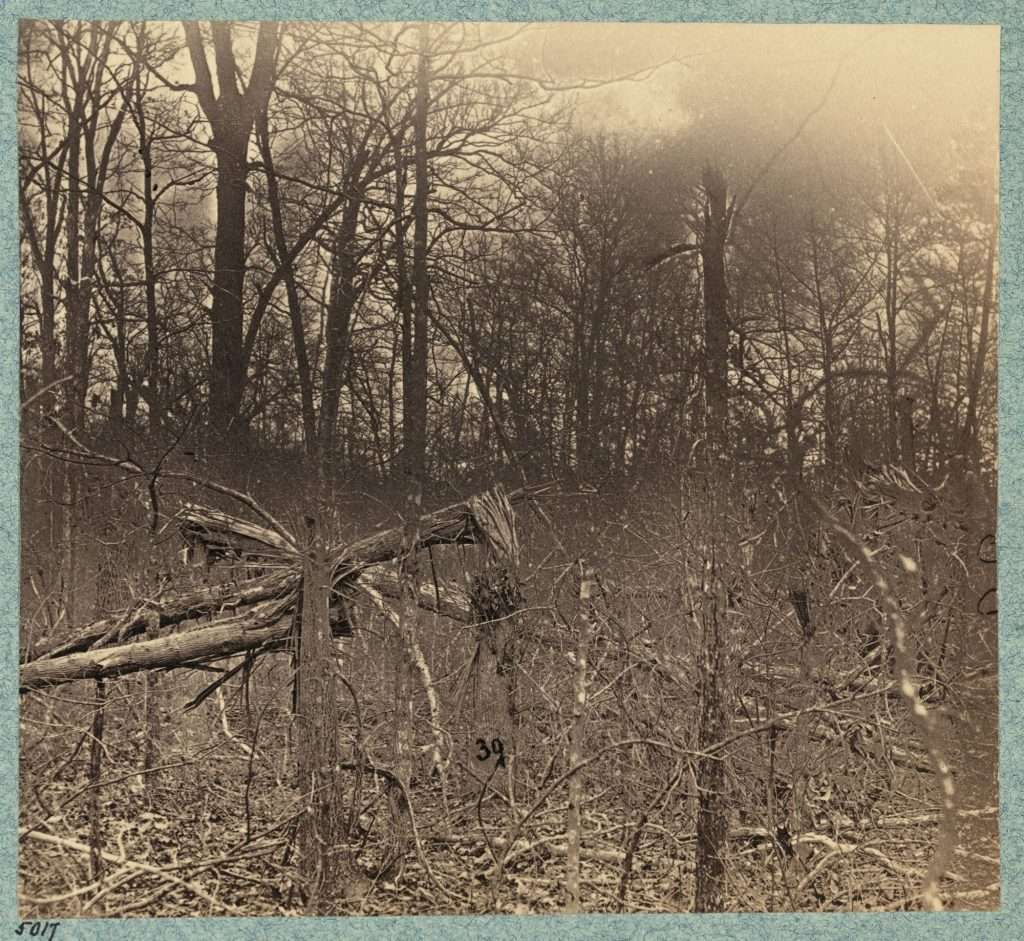 For the moment, Meade’s excuse settled the situation, but Grant, unused to delay in the execution of his orders, let alone insubordination, began to harbor doubts about the Army of the Potomac’s command. He ordered his generals on the Orange Plank Road to attack immediately without regard to which troops were where. Winfield Scott Hancock advised against it, citing the overgrown terrain of the Wilderness: “The ground over which I must pass is very bad—a perfect thicket.” Grant was in no mood to change his mind, and Hancock, unlike the units to the north, moved forward. His men took heavy losses, but as he fed more and more troops into the battle, the Confederate line began to buckle. By day’s end, A. P. Hill’s men were just barely holding their ground.

Longstreet, meanwhile, was to the south and out of the fight, his men positioned along the Catharpin Road. Lee ordered him to march to Hill’s rescue and counterattack. Expecting reinforcements to arrive in the morning, Hill told his men to rest rather than dig entrenchments or straighten their lines. When Hancock renewed his attack at five o’clock on the morning of May 6, however, Longstreet had still not arrived. Hill’s men collapsed. Only sixteen artillery pieces under William T. Poague—a Rockbridge County native who would later serve as treasurer of the Virginia Military Institute—managed to hold back the flood of Hancock’s men until, at around seven o’clock, Texans under Confederate general John Gregg suddenly appeared. 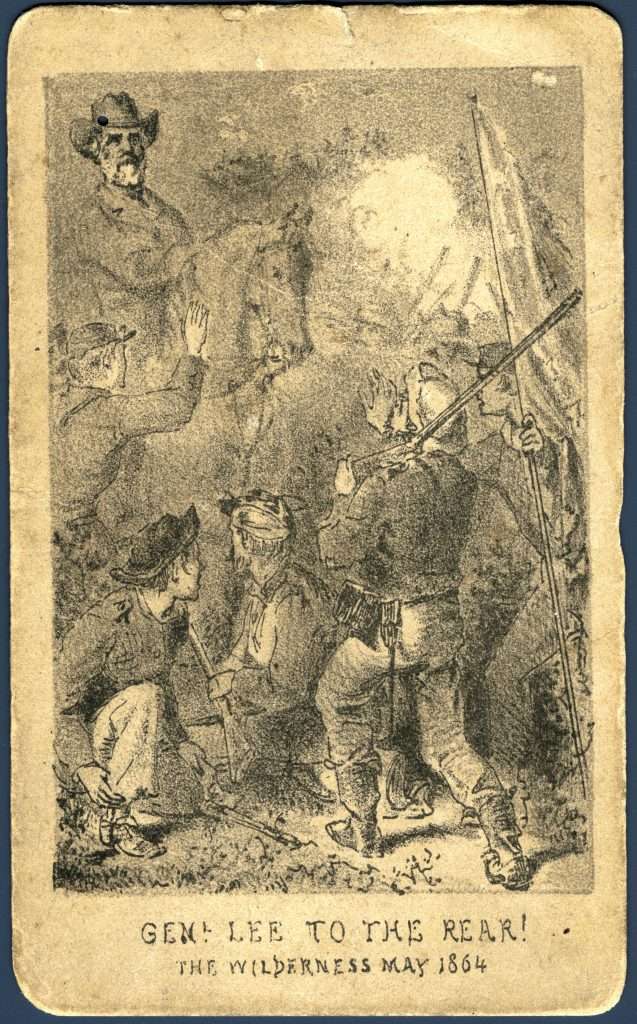 “Gregg’s Texans came in line of battle at a swinging gait from the rear of our position,” Poague later wrote, “… [and] General Lee was riding close behind them.” His blood up, Lee readied to lead the charge himself across Widow Tapp’s Field, but his men began to shout, “Lee to the rear!” and “Go back, General Lee, go back!” Regaining some of his composure, Lee stayed put as the Texas Brigade marched into the fray. Their charge stabilized the Confederate line but at great cost; the best estimates suggest that only a third of the brigade’s 700–800 men survived.

While the fighting raged around Widow Tapp’s Field, the Confederates discovered an unfinished railroad bed running south of and parallel to the Orange Plank Road and determined that it would offer them the cover they needed to advance beyond Hancock’s left flank. Lee and Longstreet reacted immediately, sending a column, under the command of Longstreet’s staff officer Gilbert Moxley Sorrel, down the corridor. At about eleven o’clock, Confederates emerged from the cut, rolling up the Union flank. Though demoralized, the Union soldiers managed to regroup behind earthworks that ran along the Brock Road.

In an effort to press the attack, Longstreet accompanied fresh troops advancing toward the Brock Road line. The air was dark with smoke from a number of small forest fires, and sight lines were further hampered by the dense brush of the Wilderness. As the general approached Confederate units preparing to join the assault, including a brigade of Virginians commanded by William Mahone, shots rang out. Confederate general Micah Jenkins, a staff officer, and a courier were all killed. Rounds slammed into Longstreet’s right arm and neck, lifting the burly South Carolinian out of his saddle. As Longstreet put it in his memoir, “the flow of blood admonished me that my work for the day was done.” 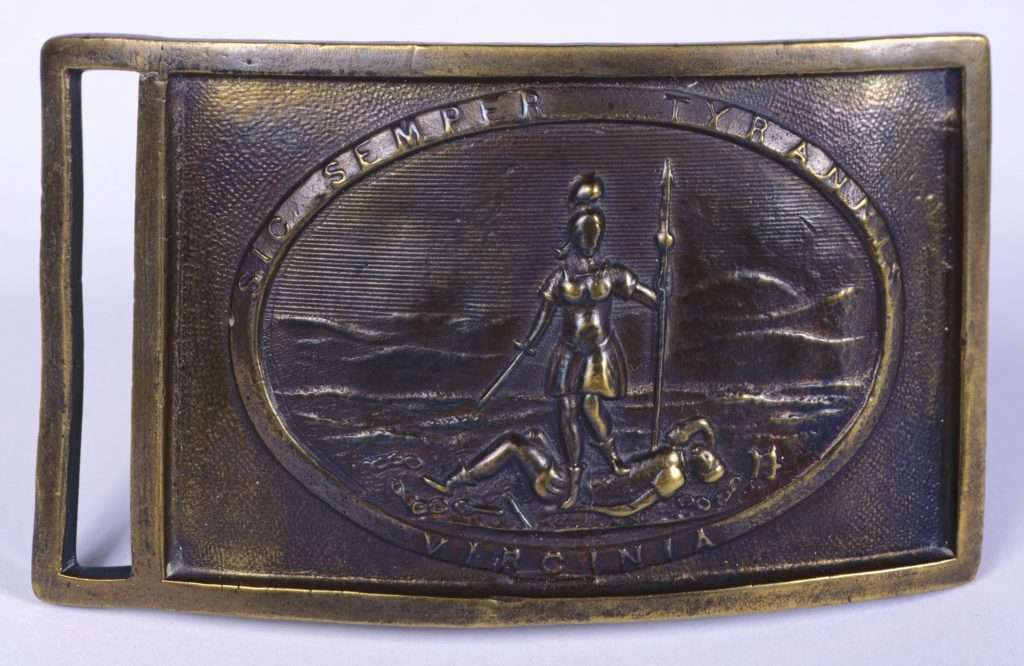 Even while being carried off the field on a stretcher, the general urged that the attack be continued. But hours passed as Confederate troops were reformed, a delay that was exacerbated by the arrival of Burnside’s Ninth Corps on Longstreet’s left flank. Grant had ordered Burnside to attack near dawn, but in characteristic fashion, it took the Rhode Islander until two o’clock in the afternoon to go into action. Finally, about five o’clock, the Confederate attacks resumed. Concealed by smoke that blinded the Union troops, Longstreet’s men briefly breached a portion of the Union lines, but failures elsewhere forced a withdrawal.

At dusk, Confederate general John B. Gordon, of Ewell’s corps, attacked Sedgwick’s Sixth Corps on the right end of the Union line, briefly breaking through and capturing hundreds of prisoners, including two Union generals. Ewell had been aware of the vulnerability earlier in the day, but had prevaricated. Now it was too late to push the advantage. This moment became the subject of much controversy after the war, with former Confederates using Ewell to deflect blame away from Lee. (Much the same happened to Ewell based on his decision not to attack Culp’s Hill on the first day of the Battle of Gettysburg.) 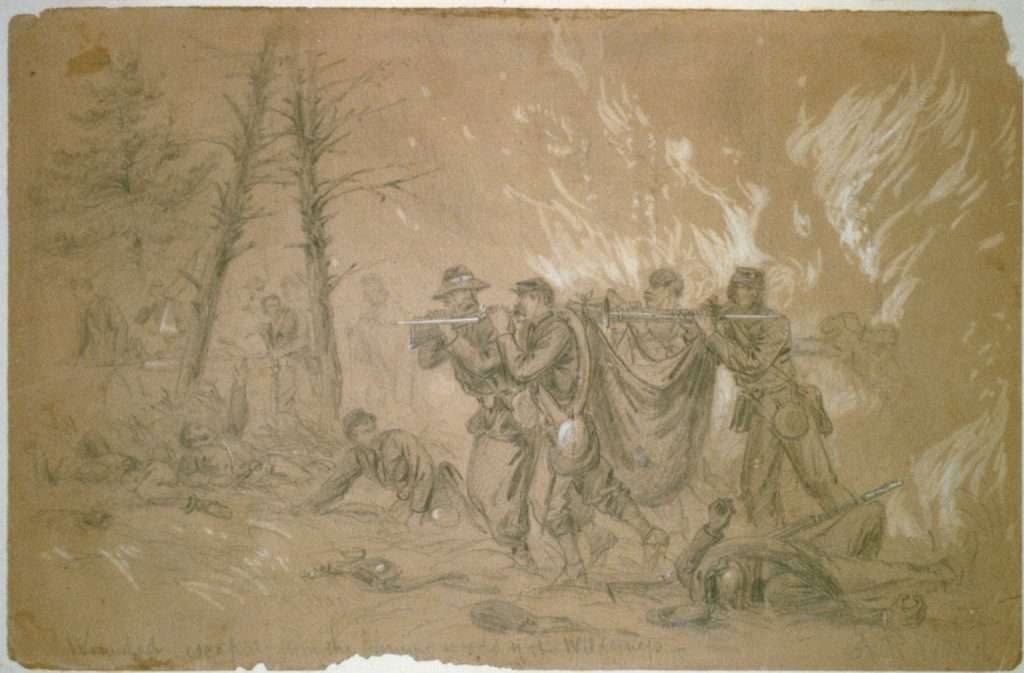 The Confederates’ tactical victory had cost a little more than 11,000 killed, wounded, and captured, while Union casualties numbered nearly 18,000 men. Compounding the horror of the battle, small brush fires that raged through the undergrowth burned many wounded soldiers alive, filling the woods with smoke and ghastly cries. The scene prompted a famous drawing by artist Alfred R. Waud that appeared in Harper’s Weekly on June 4, 1864: “Army of the Potomac—Our Wounded Escaping from the Fires of the Wilderness.”

The three days of fighting, meanwhile, revealed deep flaws in the command structure of the Army of Northern Virginia. A. P. Hill had erred when he failed to improve his lines on the night of May 5, while his recurring illness, which dated back to his West Point days and flared up during times of stress, incapacitated him for portions of the battle. Ewell, too, performed poorly, particularly on May 6. And Longstreet, Lee’s ablest subordinate, would take five months to recuperate and return to the army. 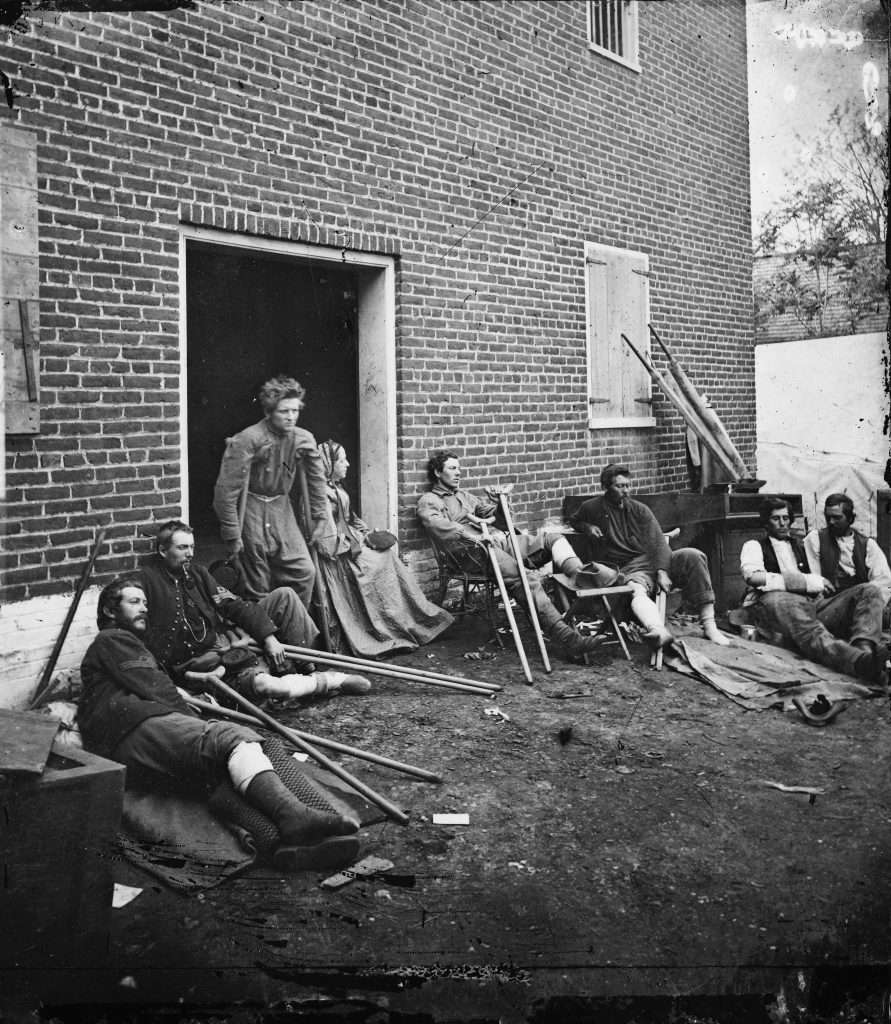 Although disappointed by the tactical setbacks, Grant refused to accept defeat, and in doing so transformed the battle into a strategic victory for the Union. When a general worried about Lee’s next move, Grant tersely replied, “I am heartily tired of hearing what Lee is going to do. Some of you always seem to think he is suddenly going to turn a double somersault, and land on our rear and on both our flanks at the same time. Go back to your command, and try to think what we are going to do ourselves, instead of what Lee is going to do.”

And what Grant did, instead of retreating as the Army of the Potomac had always done in the past, was march south. When the troops realized what was happening, they wildly and spontaneously cheered Grant. The Northern press followed suit, praising the general-in-chief’s determination to confront Lee. The bloody reward of that determination—Spotsylvania Court House, North Anna River, and Cold Harbor, when Northern morale would be most sorely tested and Grant would be catcalled a “butcher”—was yet to come.