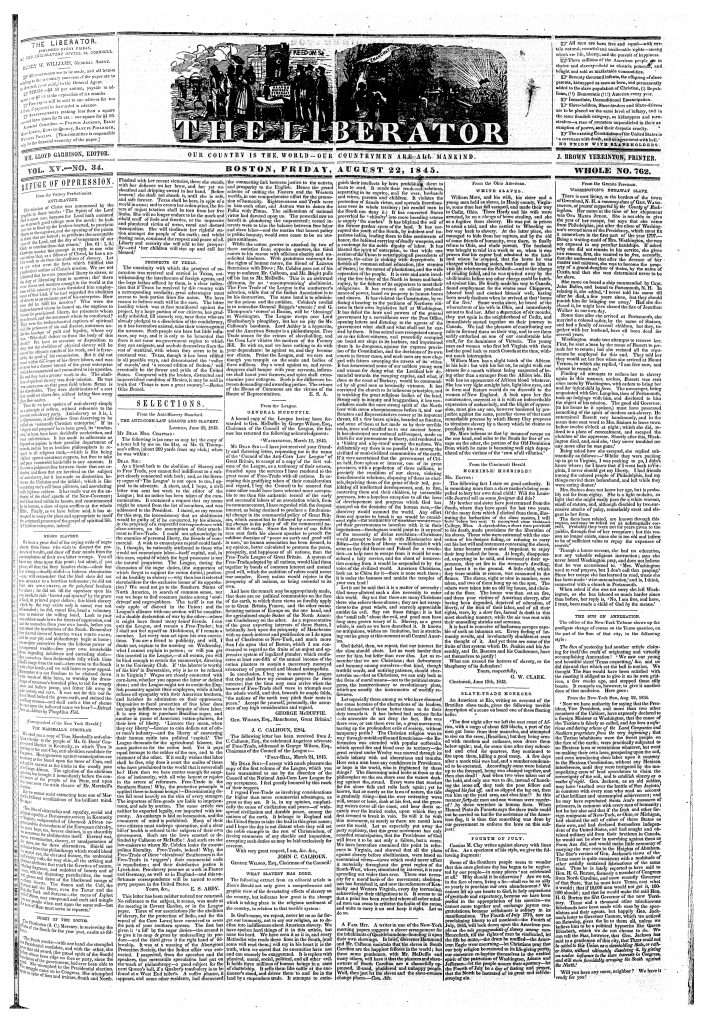 From the Granite Freeman.

There is now living, in the borders of the tow of Greenland, N. H. a runaway slave of Gen. Washington, at present supported by the County of Rockingham. Her name at the time of her elopement was Ona Maria Judge. She is not able to give the year of her escape, but says that she came from Philadelphia, just after the close of Washington’s second term of the Presidency, which must fix it somewhere in the first part of the year 1797.—Being a waiting-maid of Mrs. Washington, she was not exposed to any peculiar hardships. If asked why she did not remain in his service, she gives two reasons, first, she wanted to be free, secondly that she understood that after the decease of her master and mistress, she was to become the property of a grand-daughter of theirs, by the name of Custis, and that she was determined never to be her slave.

She came on board a ship commanded by Capt. John Bolles, and bound to Portsmouth, N. H. in relating it, she added, ‘I never told his name till after he died, a few years since, lest they should punish him for bringing me away.’ Had she disclosed it, he might have shared the fate of Jonathan Walker in our own day.

Some time after she arrived at Portsmouth, she married a colored sailor, by the name of Staines, and had a family of several children, but they, together with her husband, have all be dead for several years.

Washington made two attempts to recover her. First he sent a man by the name of Bassett to persu[a]de her to return; but she resisted all the arguments he employed for this end. They told her they would set her free when she arrived at Mount Vernon, to which she replied, ‘I am free now, and choose to remain so.’

Finding all attempts to seduce her to slavery again in this manner, useless, Bassett was sent once more by Washington, with orders to bring her and her infant child by force. The messenger, being acquainted with Gov. [John] Langdon, then of Portsmouth, took up lodgings with him, and disclosed to him the object of his mission. The good old Governor (to his honor be it spoken,) must have possessed something of the spirit of modern anti-slavery. He entertained Bassett very handsomely, and in the mean time sent word to Mrs. Staines to leave town before twelve o’clock at night; which she did, retired to a place of concealment, and escaped the clutches of the oppressor. Shortly after this, Washington died, and, said she, ‘they never troubled me any more after he was gone.’

Being asked how she escaped, she replied substantially as follows:—’Whilst they were packing up to go to Virginia, I was packing to go, I didn’t know where; for I knew that if I went back to Virginia, I never should get my liberty. I had friends among the colored people of Philadelphia, had my things carried there beforehand, and left while they were eating dinner.’

Mrs. Staines does not know her age, but is probably not far from eighty. She is a light mulatto, so light that she might easily pass for a white woman, small of stature, and, although disabled by two successive attacks of palsy, remarkably erect and elegant in her form.

The facts here related, are known through this region, and may be relied on as substantially correct. Probably they were not for years given to the public, through fear of her recapture; but this reason no longer exists, since she is too old and infirm to be of sufficient value to repay the expenses of search.

Though a house servant, she had no education, nor any valuable religious instruction; says she never heard Washington pray, and does not believe that he was accustomed to. ‘Mrs. Washington used to read prayers, but I don’t call that praying.’ Since her escape she has learned to read, trusts she has been made ‘wise unto salvation,’ and is, I think, connected with a church in Portsmouth.

When asked if she was not sorry she left Washington, as she has labored so much harder since than before, her reply is, ‘No, I am free, and have, I trust, been made a child of God by the means.’