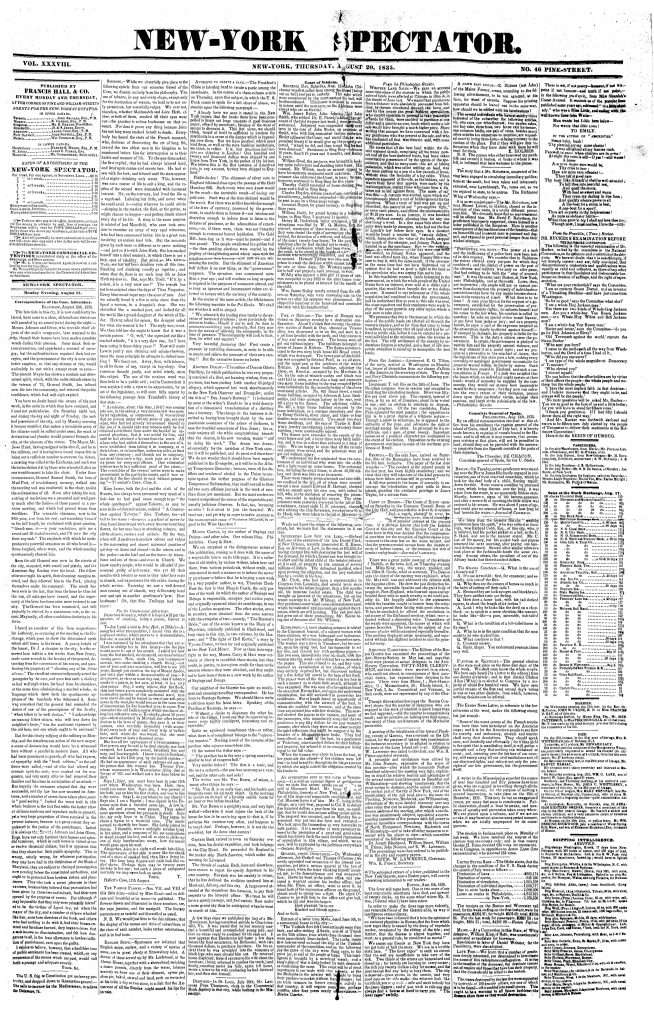 The story that a Mr. Robertson, suspected of having been engaged in circulating incendiary publications at the south, had been taken and inhumanly executed, near Lynchburgh, Va., turns out, as we are rejoiced to state, to be untrue. The Richmond Whig of Wednesday says,—

It is as we conjectured—The Mr. Robertson, now near Mount Laurel, in Halifax, chased as the incendiary of that name, is a totally different person from him. We devoutly hope that no mal-treatment will be offered him. Mr. David F. Robertson, the gentleman improperly suspected, clears himself in a letter published in the Enquirer. Here is another consequence of the machinations of the fanatics—that an honorable and innocent man is pursued and dogged, and exposed to great personal danger from their wicked attempts.

Preventive for riots.—The power of a mob and the inefficiency of a police have now been tested in this country. We consider that in Baltimore the rioters effected every purpose for which they combined; and the display of power on the part of the citizens and military was only an after game, that had nothing to do with the "stay of proceedings." It was the same near Boston, at New York, near Philadelphia, and at the south. Laws, then, are inoperative; the people will not or cannot preserve from destruction the property of individuals or associations that have by any means become obnoxious to the censures of a mob. What then is to be done? A man pays his tax for the support of a government, established for the preservation of personal and pecuniary rights; he submits himself and his cause to the law when his conduct is called in question; he asks no special action to suit his ease, or any favor from judge or jury; and as a property holder, he pays a part of the expenses incurred on the prosecution legally instituted against himself.—If amerged in damages, his property is liable for the amount. This is the duty a citizen owes the government. In return, the government is pledged to sustain him and his property against violence, and he may demand it as a moral right; and we propose as a preventive to the mischief of rioters, that the legislature of this state pass a law, making every township or municipal government accountable for property wasted within its limits by rioters. Such a law has been passed in England, and such a custom obtains in France. If a mob was satisfied that the losses which an individual might sustain at their hands would of necessity be supplied by the community, they would see at once how inoperative would be their vengeance; but they now can calculate the exact extent of their visitation, pounce down upon their particular victim, indulge their passions, and laugh at the palsied arm of the law.—Philadelphia Gazette.