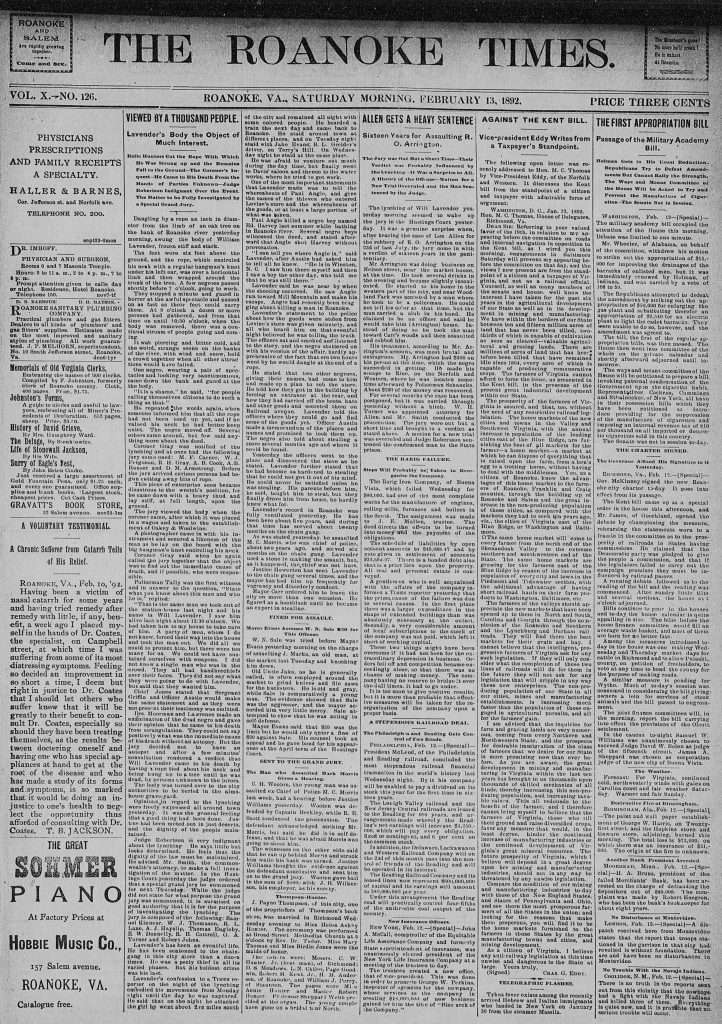 VIEWED BY A THOUSAND PEOPLE.

Lavender’s Body the Object of Much Interest.

Relic Hungers Cut the Rope With Which He Was Strung up and the Remains Fall to the Ground—The Coroner’s Inquest—He Came to His Death From the Hands of Parties Unknown—Judge Robertson Indignant Over the Event. The Matter to be Fully Investigated by a Special Grand Jury.

Dangling by a rope an inch in diameter from the limb of an oak tree on the bank of Roanoke river yesterday morning, swung the body of William Lavender, frozen stiff and stark.

The feet were six feet above the ground, and the rope, which encircled his neck with a regular hangman’s knot under his left ear, was over a horizontal limb and then wrapped around the trunk of a tree. A few negroes passed shortly before 7 o’clock, going to work.

They stopped a minute and gazed in horror at the awful spectacle and passed on as fast as their feet could carry them. At 8 o’clock a dozen or more persons had gathered, and from that time until 10:30 o’clock, when the body was removed, there was a continual stream of people going and coming.

It was piercing and bitter cold, and the weird, strange scene on the banks of the river, with wind and snow, held a crowd together when all other attractions would have failed.

One negro, wearing a pair of spectacles and looking very sanctimonious, came down the bank and gazed at the body.

“It’s a shame,” he said, “for people calling themselves citizens to do such a thing as that.”

He repeated the words again, when someone informed him that all the rope had not been used up yet, and if he valued his neck h had better keep quiet. The negro moved off. Several others came around, but few said anything more about the deed.

Coroner Gray was notified of the lynching and at once had the following jury summoned: M. F. Carner. W. J. Ferguson, R. H. Gray, A. B. cook, A. B. Houser and D. M. Armstrong. Before the jury arrived curious persons had begun cutting away bits of rope.

This piece of enterprise soon became disastrous to the wretch’s position, for he came down with a heavy thud and lay stiff, at full length, upon the ground.

The jury viewed the body when the coroner came, after which it was placed in a wagon and taken to the establishment of Oakey & Woolwine.

A photographer came in with his instrument and secured a likeness of the man as he lay on the board with the big hangman’s knot encircling his neck.

Coroner Gray said when he again called the jury together that the object was to find out the immediate cause of death, and if possible, who were responsible.

Policeman Tally was the first witness and in answer to the question, “State what you know about this man and who he is,” replied:

“That is the same man we took out of the station-house last night and his name is Will Lavender. I saw him alive last night about 12:30 o’clock. We had taken him to my house to take care of him. A part of men, who I do not know, forced their way into the house and took the man out. We did all we could to protect him, but there were too many for us. We could not have sustained ourselves with weapons. I did not know a single man who was in the crowd. They all had handkerchiefs over their faces. They did not say what they were going to do with Lavender, but said that they wanted him.

Chief Jones stated that Sergeant Griffin and Officer Austin would make the same statement and as they were not present their testimony was omitted.

Drs. Moorman and Lawrence made an examination of the dead negro and gave their opinion that he came to his death from strangulation. They could not say positively what was the immediate cause of his death without an autopsy. But the jury decided not to have an autopsy and after a few minutes’ consultation rendered a verdict that Will Lavender came to his death by having a rope tied about his neck and being hung up to a tree until he was dead, by persons unknown to the jurors.

The body was turned over to the city authorities to be buried in the almshouse grave-yard.

Opinions in regard to the lynching were freely expressed all around town yesterday. It was the general feeling that a good thing had been done. Justice had been meted out in just deserts, and the dignity of the people maintained.

Judge Robertson is very indignant about the lynching. He says little but looks determined. He feels that the dignity of the law must be maintained. He advised Mr. Smith, the commonwealth’s attorney, to make a full investigation of the matter. IN the Hustings Court yesterday the judge ordered that a special grand jury be summoned for next Thursday. While the judge did not state for what purpose the grand jury was summoned, it is surmised on good authority that it is for the purpose of investigating the lynching. The jury is composed of the following: Samuel Kinnear, W. J. Thomason, R. L. Lane, A. J. Hayslip, Thomas Engleby, E. W. Donnelly, R. H. Cottrell, G. A. Turner and Robert Johns.

Lavender’s has been an eventful life. He has been sentenced to the chain-gang in this city more than a dozen times. He was a petty thief in all its varied phases. But his boldest crime was his last.

Lavender’s confession to a Times reporter on the night of the lynching embodied his movements from Monday night until the day he was captured. He said that on the night he attacked the girl he went about five miles south of the city and remained all night with some colored people. He boarded a train the next day and came back to Roanoke. He staid [sic] around town at different places, and on Tuesday night staid with Jake Evans, B. L. Greider’s driver, on Terry’s Hill. On Wednesday night he staid at the same place.

He was afraid to venture out much during the day time, but finally went to Davis’ saloon and thence to the water works, where he tried to get work.

One of the most important statements that Lavender made was to tell the whereabouts of Paul Angle, and give the names of the thieves who entered Levine’s store and the whereabouts of the goods, or at least a large portion of what was taken.

“I can tell you where Angle is,” said Lavender, after Austin had asked him to tell all he knew. “He is in Winston, N. C. I saw him there myself and then I saw a boy the other day, who told me that he was still there.”

Lavender said he was near by when the shooting occurred. He saw Angle run toward Mill Mountain and make his escape. Angle had recently been bragging about killing a man in Roanoke.

Lavender’s statement to the police about how the good were stolen from Levine’s store was given minutely, and all who heard him on that eventful night believed he was telling the truth. The officers sat and smoked and listened to the story, and the negro stuttered on with his version of the affair, hardly apprehensive of the fact that ere two hours went by he would dangle at the end of a rope.

He stated that two other negroes, giving their names, had come to him and made up a plan to rob the store. He told how they go in the building by forcing an entrance at the rear, and how they had carried off the boots, hats and other goods and secreted them on Railroad avenue. Lavender told the officers where they could go and find some fo the goods yet. Officer Austin made a memorandum of the places and names and promised to look them up. The negro also told about stealing a stove several months ago and where it could be found.

Yesterday the officers wen tot the place and discovered the stove as he stated. Lavender further stated that he had become so hardened to stealing that he could not get it out of his mind. He could never be satisfied unless he was stealing. His parents before him, he said, taught him to steal, but they finally drove him from home, he hardly knew what for.

Lavender’s record in Roanoke was fully ventilated yesterday. He has been here about five years, and during that time has served about twenty months on the chain gang.

As was stated yesterday, he assaulted M. C. Morris, who was chief of police, about two years ago, and served six months on the chain gang. Lavender used a stone in making the assault, but, as it happened, the chief was not hurt.

Justice Howerton has sent Lavender to the chain gang several times, and the mayor has had him up frequently for vagrancy and disorderly conduct.

Mayor Carr ordered him to leave the city on more than one occasion. He figured as a bootblack until he came an expert in stealing.