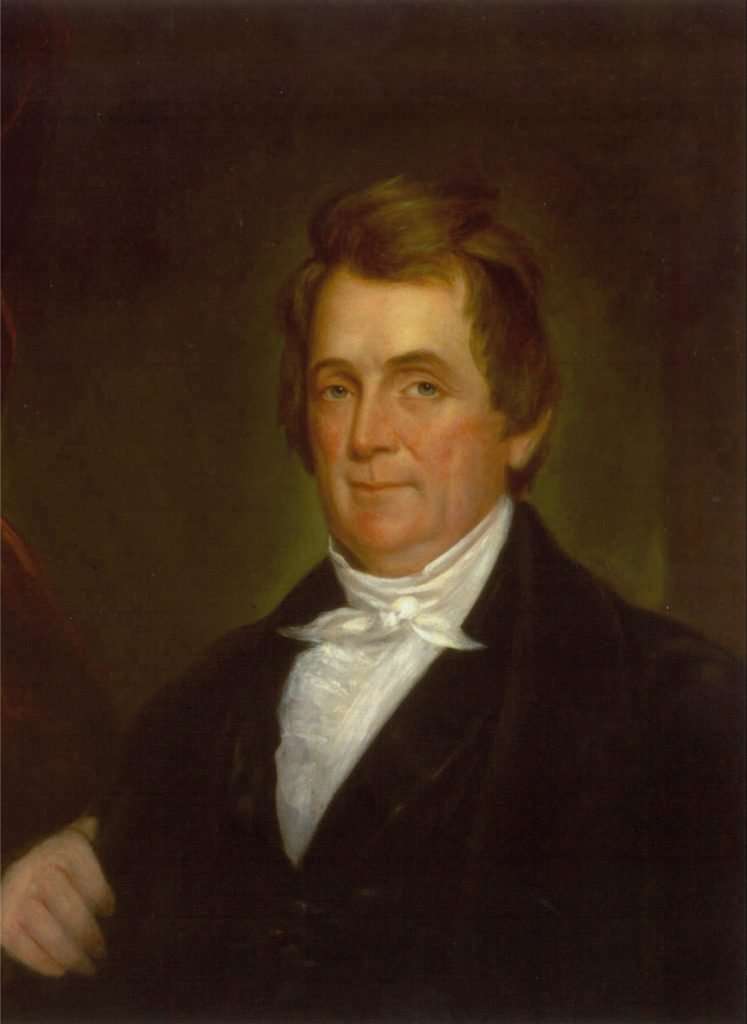 Charles Scott Venable was born on April 19, 1827, at Longwood, a family estate near Farmville. (The future Confederate general Joseph E. Johnston had been born there in 1807, four years before the Venable family acquired the estate.) He was the sixth child of Nathaniel Venable and Mary Scott Venable. Venable hailed from a family of slaveholding planters, although his great-grandfather, Nathaniel Venable, of Slate Hill, had helped to found Hampden-Sydney College and steer it through the American Revolution (1775–1783). The Venable family remained closely associated with the college in subsequent generations.

Venable rejected farming and politics, and instead threw himself into academia. In 1839, at the age of twelve, he enrolled at Hampden-Sydney College, graduating with an AB degree in 1842 and remaining to work as a mathematics tutor. In 1845, Venable matriculated at the University of Virginia. He took courses in law but ultimately returned to mathematics. The following year, at nineteen, Venable accepted a professorship in mathematics from Hampden-Sydney and held the position until 1856, earning a reputation as a strict, sometimes boring, but otherwise effective and enthusiastic teacher. 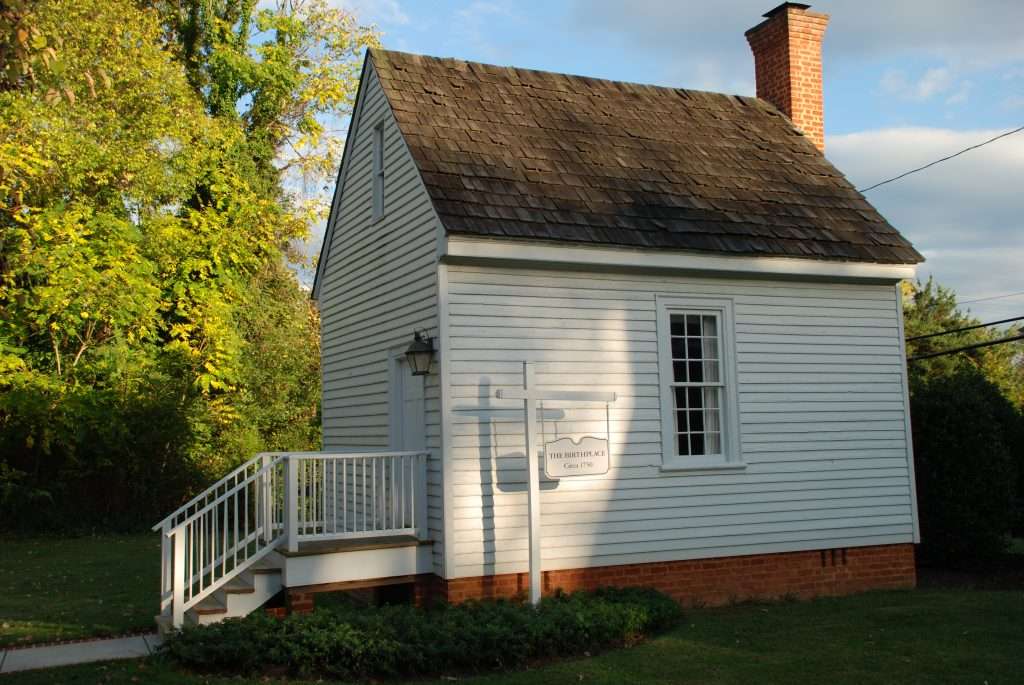 After a year at Hampden-Sydney, Venable took leave from Hampden-Sydney to study astronomy, geology, and chemistry at the University of Virginia. He took a second furlough in 1852, primarily to study astronomy with Johann Franz Encke in Berlin and with Friedrich Wilhelm Argelander in Bonn. In the summer of 1855, Venable attended a geological expedition in New York to examine rocks and fossils from the Paleozoic era (541 million to just more than 251 million years ago).

In 1856, Venable took a new job teaching natural philosophy and chemistry at the University of Georgia, leaving some at Hampden-Sydney feeling betrayed, especially given the institution’s granting of his sabbaticals. He left Georgia after a year for reasons that are unclear, but he immediately secured the chair of mathematics and astronomy at the University of South Carolina.

Venable was an ardent defender of the South and slavery, and in an 1858 address to University of Virginia alumni he compared the northern barbarians who threatened Rome to the northerners in the United States who, he said, then threatened the South. Even after the Civil War, Venable extended this argument, advocating for improved higher education in the South by suggesting that northern universities had been overcome by sophistry. In 1860, Venable sailed to the Labrador Coast of Canada with a team of astronomers to observe the total solar eclipse on July 18. His tenure at the University of South Carolina ended with the outbreak of the Civil War, although he technically remained on leave until 1862.

On January 16, 1856, Venable married Margaret Cantie McDowell, of Lexington, the daughter of James McDowell, a Democrat who had served as the governor of Virginia from 1843 to 1846 and in the U.S. House of Representatives from 1846 to 1851. The couple had one boy and three girls who survived to maturity. 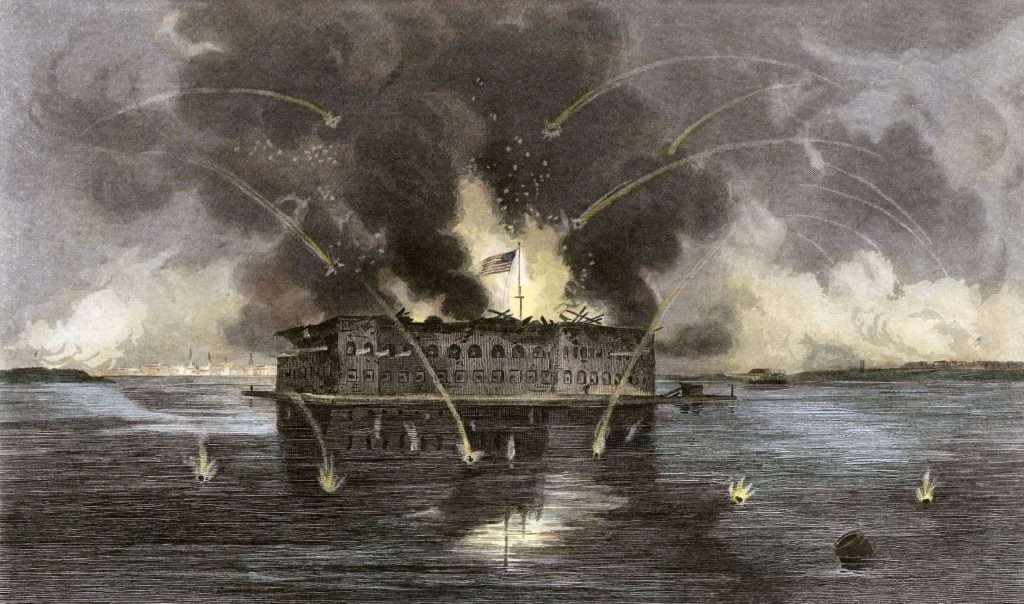 The Bombardment of Fort Sumter

In 1860, Venable joined the Congaree Mounted Rifles, a South Carolina cavalry company that was sent to Charleston the next spring, arriving in time on witness the Confederate bombardment of Fort Sumter on April 12. Soon after, Venable resigned his cavalry commission to enlist as a private in Company A, or the Governor’s Guards, of the 2nd South Carolina Infantry Regiment. The company was mustered at Camp Davis, near Richmond, on May 22, 1861, and fought at the First Battle of Manassas two months later. After a brief posting as a volunteer aide-de-camp on General Wade Hampton’s staff, Venable was promoted to lieutenant and then captain of artillery in the Engineering Corps, helping to design Confederate defensive works at Vicksburg, Mississippi. 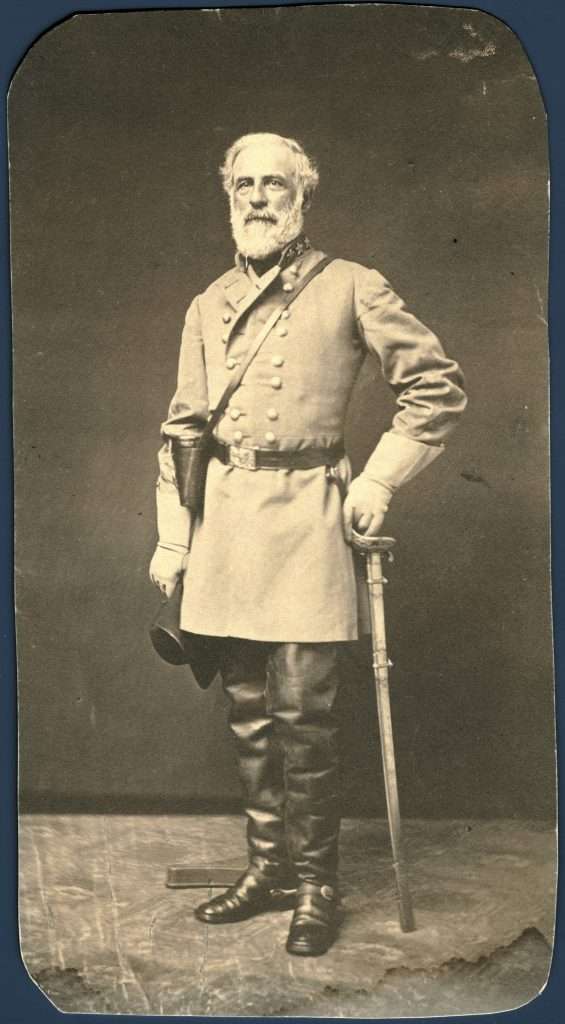 In the summer of 1862, Robert E. Lee, then a military adviser to President Jefferson Davis, appointed Venable as one of his four aides-de-camp, which carried a promotion to major (and later to lieutenant colonel). Venable’s capable, organized mind was well-suited for the work of a staff officer, but his appointment also reflected a shared family history. Like the Venables, the Lees hailed from the Virginia gentry. Venable’s grandfather, Samuel Woodson Venable, had served during the Revolution under Lee’s father, General Henry “Light-Horse Harry” Lee. By the time Venable reported for duty on June 23, 1862, Lee had risen to command of the Army of Northern Virginia. Venable served as Lee’s secretary for the rest of the war, maintaining the general’s schedule and assisting in the myriad administrative tasks necessary to keep the army fed, clothed, and armed. Venable also was responsible for relaying critical orders between Lee and his subordinate field commanders. Lee surrendered the Army of Northern Virginia at Appomattox on April 9, 1865, and that day he and six other officers—including Venable—were granted parole. 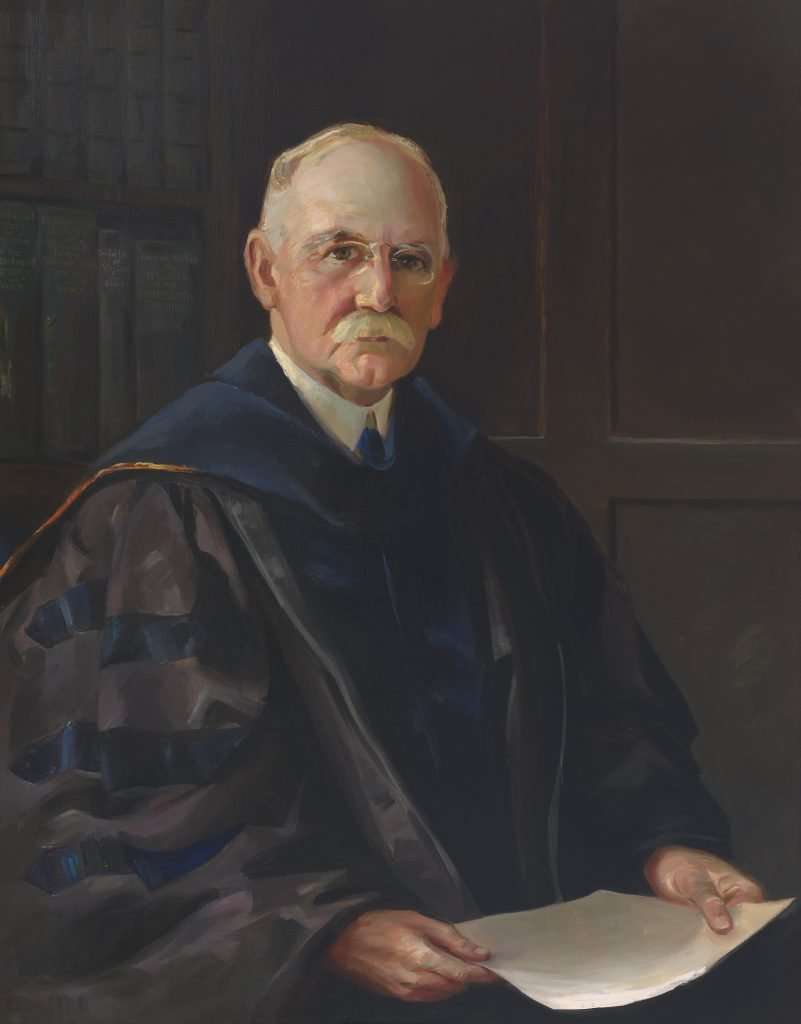 In August 1865 Venable became the chair of mathematics at the University of Virginia, a position previously held by Albert Taylor Bledsoe, who had left the school to become a Confederate diplomat and then, after the war, remained in London. The university was low on students and money, and Venable drew on his association with the widely revered General Lee to advocate for the school with state officials and private donors, arguing that it was crucial in maintaining what he believed to be the intellectual superiority of the South. His efforts led to major fund-raising successes during his tenure, The historian Philip Alexander Bruce credits Venable’s “influence, direct or indirect,” with the General Assembly‘s decision, in 1877, to double the annual state appropriation to the university, and with major gifts to the university from the benefactors Samuel Miller and W. W. Corcoran.

At the same time, Venable lobbied for overhauling the university’s finances. The university had long operated under a decentralized fee system in which tuition was paid directly to the university’s various schools, or departments. This led to wide discrepancies in salaries and implicitly discouraged the opening of new schools, which might siphon off students, and therefore money, from existing schools. At a June 1867 meeting of the faculty, Venable proposed equal pay for all professors—despite being one of the best compensated members—and the setting aside of funds to attract talented scholars to open new schools at the university.

Toward that end, and in spite of his pay plan failing a faculty vote, Venable advocated for the expansion of offerings in the applied sciences. Virginia had strayed little from the classical liberal education laid out by its founder, Thomas Jefferson, but Venable believed that the postwar South required engineers and scientists to prosper. By making the University of Virginia’s educational offerings more relevant to the needs of the moment, Venable hoped to attract more students and thus badly needed tuition. He was largely responsible for securing funding and hiring professors for the new School of Agriculture (1869), the School of Geology (1879–1880), and the School of Theoretical and Practical Astronomy (1882–1883). 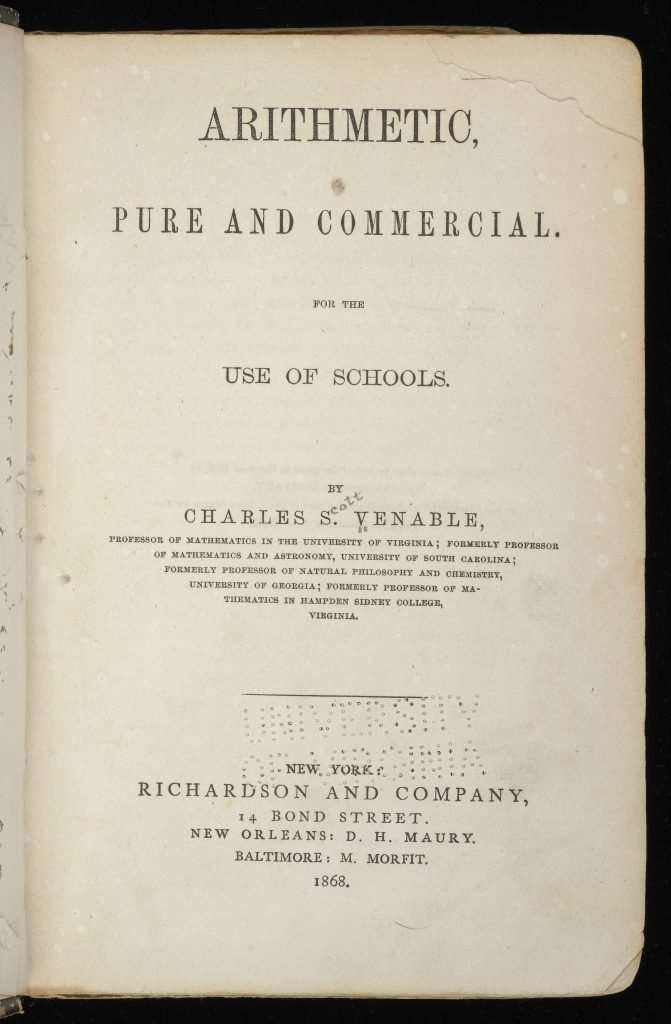 In 1866, Venable offered the first academic prize awarded at the university. Designed to stimulate interest in math, the award lasted four years and promised $40 to the student who solved the most problems through the course of a session. He also authored a series of mathematical treatises, from Arithmetic, Pure and Commercial, published in 1868, to High School Algebra, published posthumously in 1904. In 1871, the State Board of Education adopted for use in its newly established public schools a number of textbooks written by University of Virginia professors, including the mathematics series by Venable, a French grammar and reader by Maximilian Schele De Vere, an English reader and history series by George F. Holmes, and a Latin series by Basil L. Gildersleeve.

Robert E. Lee died on October 12, 1870. A few weeks later, on November 3, his former comrades in arms held a memorial meeting in Richmond to commemorate the late general’s life and legacy. The next day they organized an alumni society, the Association of the Army of Northern Virginia, and elected Venable as recording secretary. Jubal A. Early, the association’s president, had served as a general under Lee and after the war became famous for his fiery speeches at Confederate reunions and memorial rallies across the South. Through these speeches and associated writings, he and others developed what became known as the Lost Cause view of the Civil War, which sought to discount the importance of slavery and emphasize the valor of Confederate soldiers. 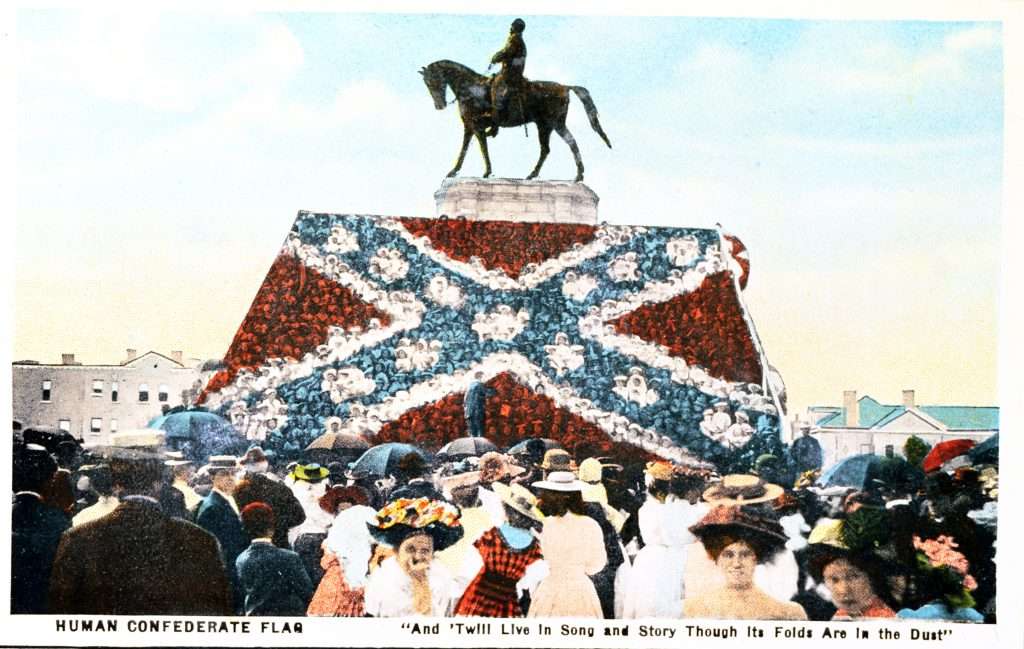 As Lee’s former aide-de-camp, Venable played an important role in this social and historical movement. He had known the operations of the Army of the Northern Virginia better than almost anyone, and as secretary of the association, he helped compile wartime documents contributed by the group’s members and provide historical information when called upon. In 1887, Venable wrote an account of Lee at the Battle of the Wilderness (1864) for Century Magazine that bore many Lost Cause themes: he deified Lee as the successor to George Washington, contrasted the incompetence of the Confederate government against the bravery of its soldiers, and minimized the role of Union general Ulysses S. Grant by casting him as a butcher who only defeated Lee with overwhelming manpower. This understanding of the Wilderness in particular, but also of the Civil War in general, held sway until challenged by historians beginning in the mid-twentieth century. 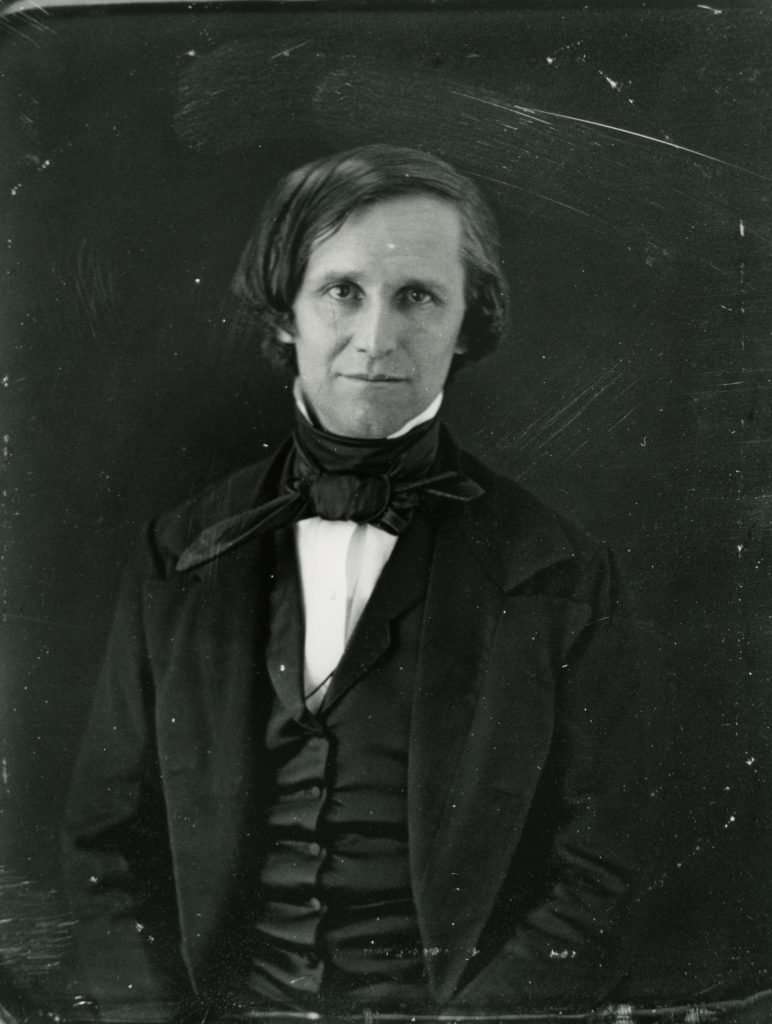 Venable served as faculty chairman at the University of Virginia from 1870 to 1873 and then again from 1886 to 1888. Right away in 1870, he was forced to deal with a simmering dispute between the faculty and the board of visitors. Led by the law professor John B. Minor, a faction of professors argued that control of the university should be shifted primarily toward the faculty. When the rector, B. Johnson Barbour, threatened to resign, Venable wrote him a letter decrying “this scheme of Minor’s” and the “clamor against the Visitors.” Barbour remained as rector until 1872.

Venable resigned as faculty chairman in 1873, likely to care for his ailing wife, who died on January 15, 1874, in Charlottesville. In 1876, he married Mary Southall Brown, the widow of J. Thompson Brown, a Confederate artillery officer killed at the Battle of the Wilderness. They had one son. 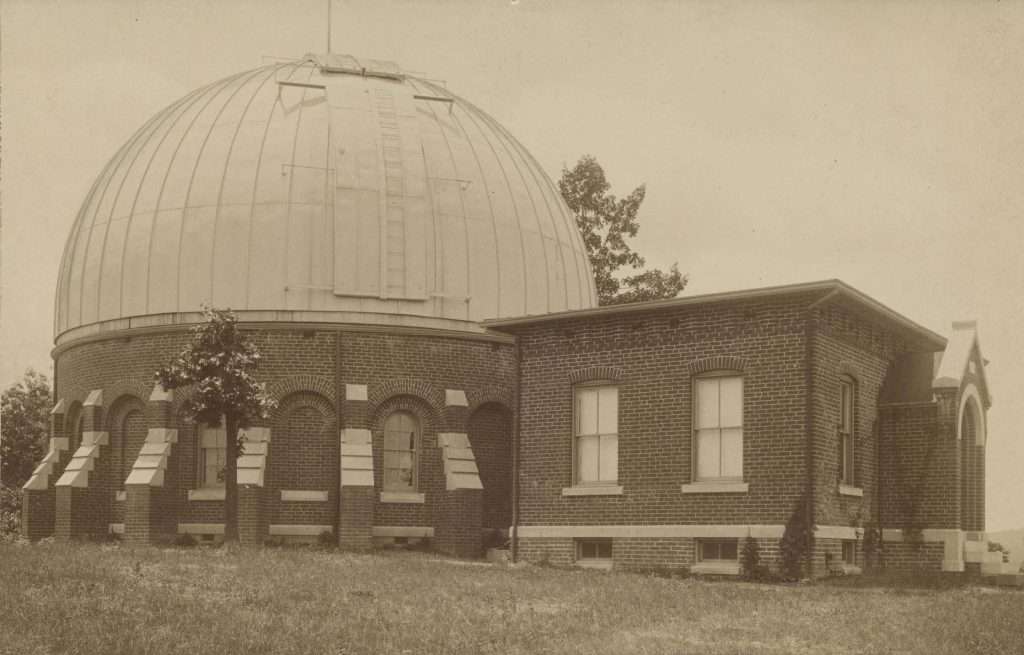 Throughout the 1870s, Venable exchanged correspondence with Leander J. McCormick, a native of Rockbridge County whose family had patented a mechanical reaper and founded what became the International Harvester Company. The two shared an interest in astronomy, and Venable persuaded McCormick to donate $78,000 toward a telescope and domed observatory, and then worked to secure $25,000 from William H. Vanderbilt and $50,000 from alumni. The McCormick Observatory, located on Observatory Mountain, near the university, was dedicated on April 13, 1885. Its refractor telescope boasted a twenty-six-inch lens and was the second largest in world.

In May 1894 Venable joined a majority of faculty in voting 14 to 7 against the admission of women to the university. A brief exception had been made for Caroline Preston Davis, the granddaughter of the former law professor and faculty chairman John A. G. Davis, who had been murdered on the Lawn by a student in 1840. She received a pass certificate in mathematics, signed by Venable, with whom she studied, on June 14, 1893. The faculty and subsequently the board of visitors disallowed any further coeducation. 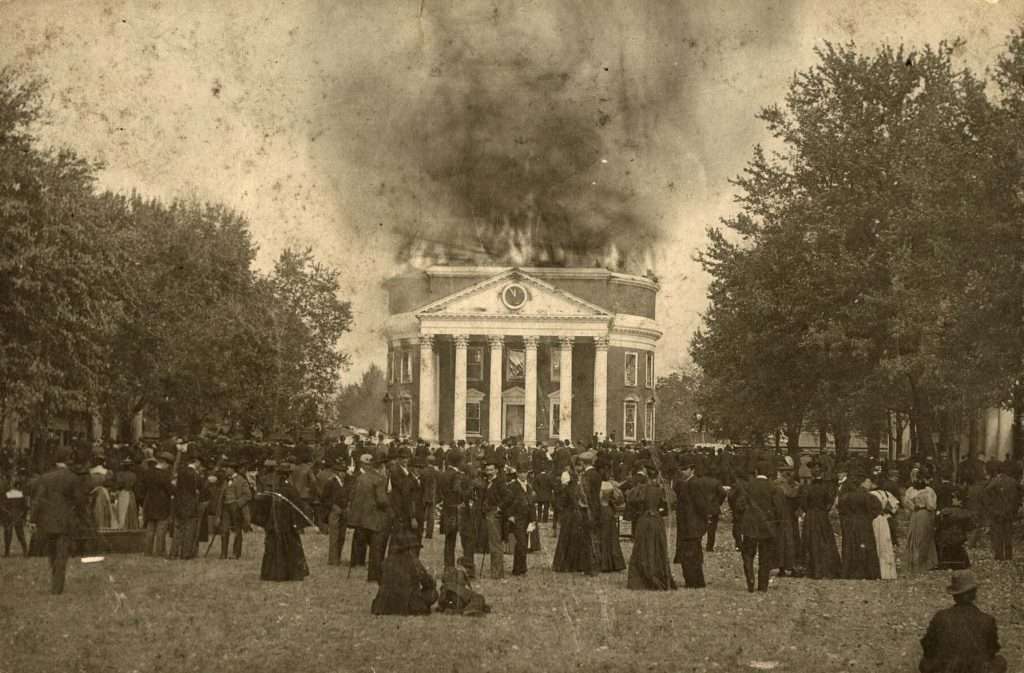 The Rotunda, which then housed the university’s library, caught fire on October 27, 1895, and as the flames quickened, Venable was said to have cut short student efforts at rescuing books. His final fund-raising efforts were directed at restoring the university’s depleted library collection. In poor health, he retired from teaching in 1896 but was elected professor emeritus. Venable died at his home in Charlottesville on August 11, 1900, and was buried in the University of Virginia Cemetery. In 1925, a newly constructed elementary school in Charlottesville was named for Venable.