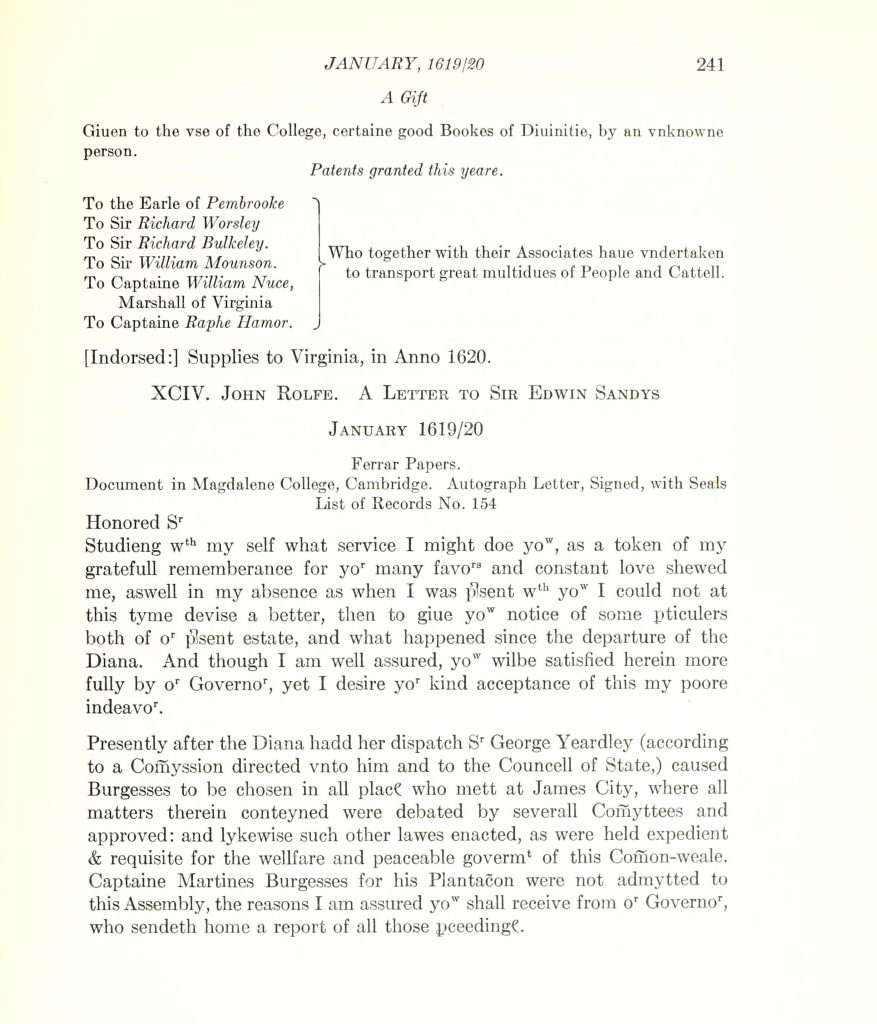 Studieng with my self what service I might doe yow, as a token of my gratefull rememberance for yor many favors and constant love shewed me, aswell in my absence as when I was present with yow I could not at this tyme devise a better, then to give yow notice of some pticulers both of our present estate, and what happened since the departure of the Diana. And though I am well assured, yow wilbe satisfied herin more fully by our Governor, yet I desire your kind acceptance of this my poore indeavor.

Presently after the Diana hadd her dispatch Sir George Yeardley (according to a Commyssion directed unto him and to the Councell of State,) caused Burgesses to be chosen in all places who mett at James City, where all matters therin conteyned were debated by severall Commyttees and approved: and likewise such other lawes enacted, as were held expedient & requisite for the welfare and peaceable govermt of this Common-weale. Captaine Martines Burgesses for his Plataccon were not admitted to this Assembly, the reasons I am assured yow shall receive from our Governor, who sendeth home a report of all those proceedings. 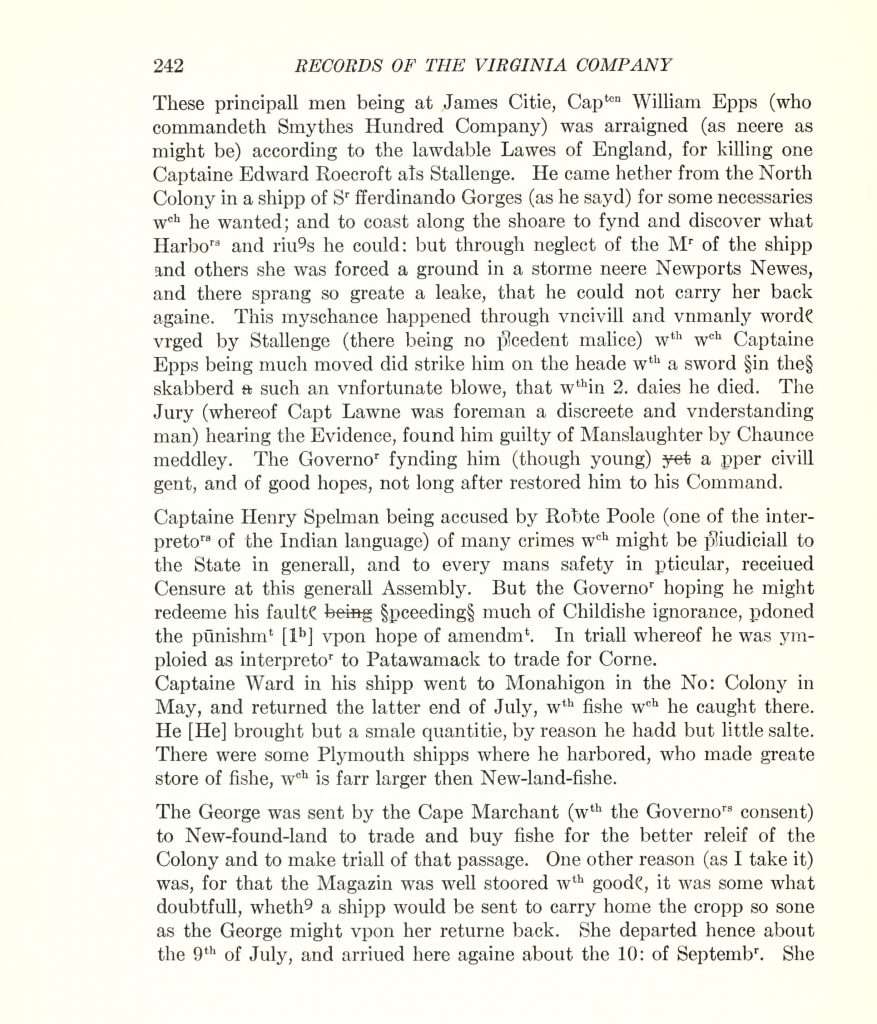 These principall men being at James Citie, Capten William Epps (who commandeth Smythes Hundred Company) was arraigned (as neere as might be) according to the lawdable Lawes of England, for killing one Captaine Edward Roecroft alias Stallenge. He came hether from the North Colony in a ship of Sir fferdinando Gorges (as he sayd) for some necessaries which he wanted; and to coast along the shoare to fynd and discover what Harbors and rivers he could: but through neglect of the Master of the shipp and others she was forced a ground in a storme neere Newports Newes, and there sprang so greate a leake, that he could not carry her back againe. This myschance happened through uncivill and unmanly words urged by Stallenge (there being no precedent malice) with which Captaine Epps being much moved did strike him on the heade with a sword in the skabberd such an unfortunate blowe, that within 2. daies he died. The Jury (whereof Capt Lawne was foreman a discreete and understanding man) hearing the Evidence, found him guilty of Manslaughter by Chaunce medley. The Governor fynding him (though young) a proper civill gent, and of good hopes, not long after restored him to his Command.

Captaine Henry Spelman being accused by Roberte Poole (one of the interpretors of the Indian language) of many crimes which might be prejudiciall to the State in generall, and to every mans safety in particular, received Censure at this generall Assembly. But the Governor hoping he might redeeme his faults proceeding much of Childishe ignorance, pardoned the punishment upon hope of amendment. In trial whereof he was ymploied as interpretor to Patawamack to trade for Corne. 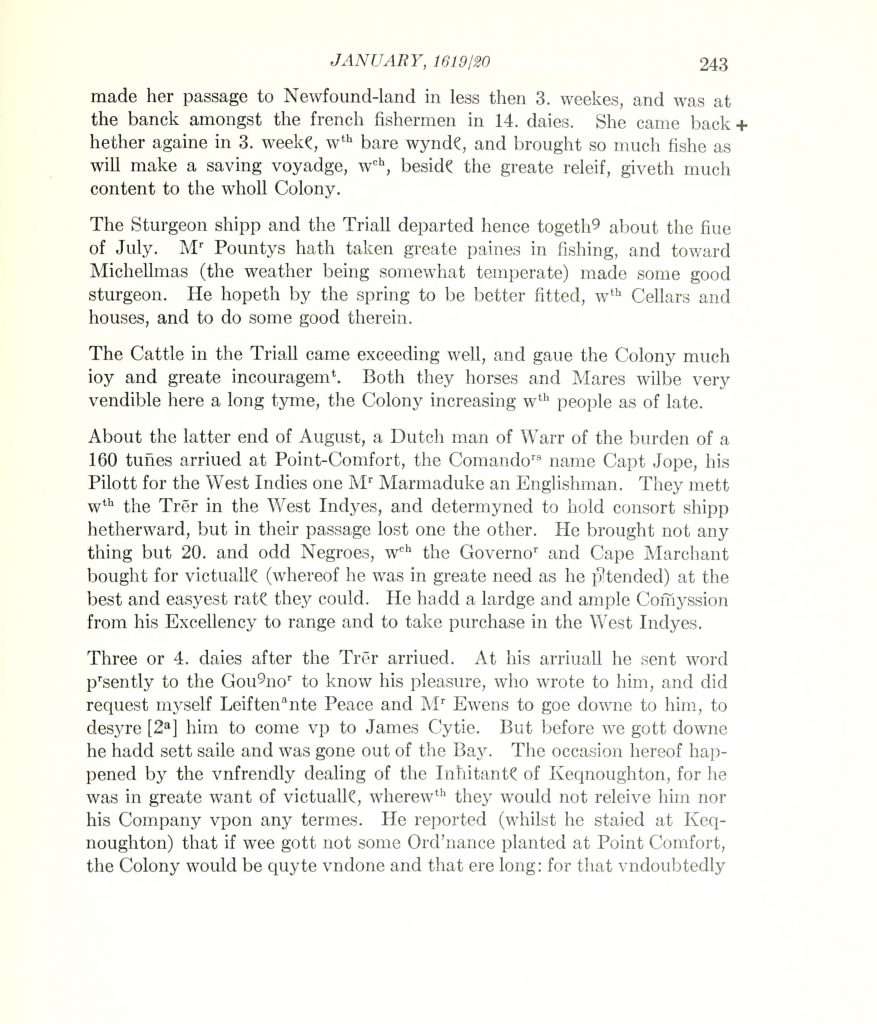 About the latter end of August, a Dutch man of Warr of the burden of a 160 tunnes arrived at Point-Comfort, the Comandors name Capt Jope, his Pilott for the West Indies one Mr Marmaduke an Englishman. They mett with the Treasurer in the West Indyes, and determined to hold consort shipp hetherward, but in their passage lost one the other. He brought not any thing but 20. and odd Negroes, which the Governor and Cape Marchant bought for victualls (whereof he was in greate need as he pretended) at the best and easyest rates they could. He hadd a lardge and ample Commyssion from his Excellency to range and to take purchase in the West Indyes.

Three or 4. daies after the Treasurer arrived. At his arrivall he sent word presently to the Governor to know his pleasure, who wrote to him, and did request myself and Leiftenante Peace and Mr Ewens to goe downe to him, to desyre him to come up to James Cytie. But before we gott downe he hadd sett saile and was gone out of the Bay. The occasion hereof happened by the unfrendly dealing of the Inhabitants of Keqnoughton, for he was in greate want of victualls, wherewith they would not releive him nor his Company upon any termes. He reported (whilst he staied at Keqnoughton) that if wee got not some Ord’nance planted at Point Comfort, the Colony would be quyte undone and that ere long: for that undoubtedly 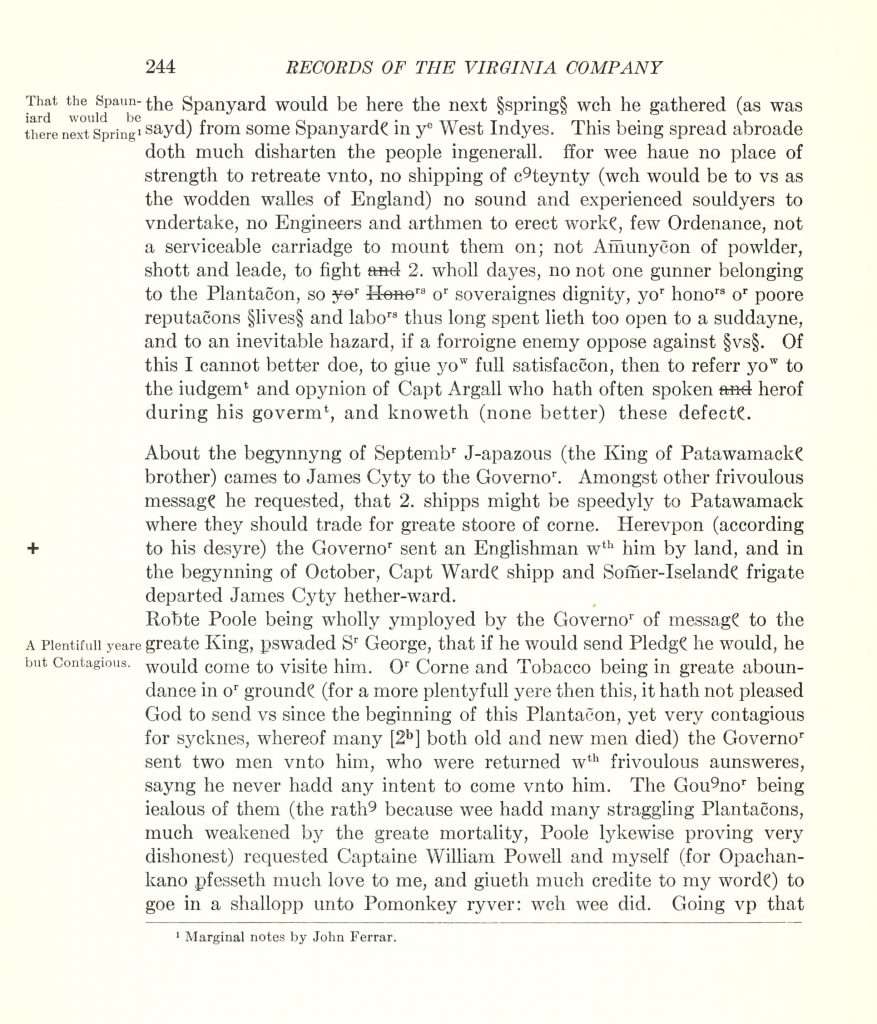 the Spanyard would be here the next spring wch he gathered (as was sayd) from some Spanyards in the West Indyes. This being spread abroade doth much disharten the people ingenerall. ffor wee have no place of strength to retreate unto, no shipping of certeynty (wch would be to us as the wodden walles of England) no sound and experienced souldyers to undertake, no Engineers and arthmen to erect works, few Ordenance, not a serviceable carriadge to mount them on; not Ammunycon of powlder, shott and leade, to fight 2. wholl dayes, no not one gunner belonging to the Plantaccon, so our soveraignes dignity, your honors our poore reputacons lives and labors thus long spent lieth too open to a suddayne, and to an inevitable hazard, if a forroigne enemy oppose against us. Of this I cannot better doe, to give yow full satisfaccon, then to referr yow to the judgement and opynion of Capt Argall who hath often spoken herof during his goverment, and knoweth (none better) these defects.

About the begynnyng of September J-apazous (the King of Patawamacks brother) came to James Cyty to the Governor. Amongst other frivoulous messages he requested, that 2. shipps might be speedyly to Patawamack where they should trade for greate stoore of corne. Hereupon (according to his desyre) the Governor sent an Englishman with him by land, and in the begynning of October, Capt Wards ship and Sommer-Iselands frigate departed James Cyty hether-ward.

Roberte Poole being whole ymployed by the Governor of messages to the greate King, perswaded Sir George, that if he would send Pledges he would, he would come to visite him. Our Corne and Tobacco being in great aboundance in our grounds (for a more plentyfull yere then this, it hath not pleased God to send us since the beginning of the Plantaccon, yet very contagious for sycknes, whereof many both old and new men died) the Governor sent two men unto him, who were returned with frivoulous aunsweres, sayng he never hadd any intent to come unto him. The Governor being jealous of them (the rather because wee hadd many straggling Plantaccons, much weakened by the greate mortality, Poole lykewise proving very dishonest) requested Captaine William Powell and myself (for Opachankano professeth much love to me, and giveth much credite to my words) to goe in a shallopp unto Pomonkey ryver: wch wee did. Going up that 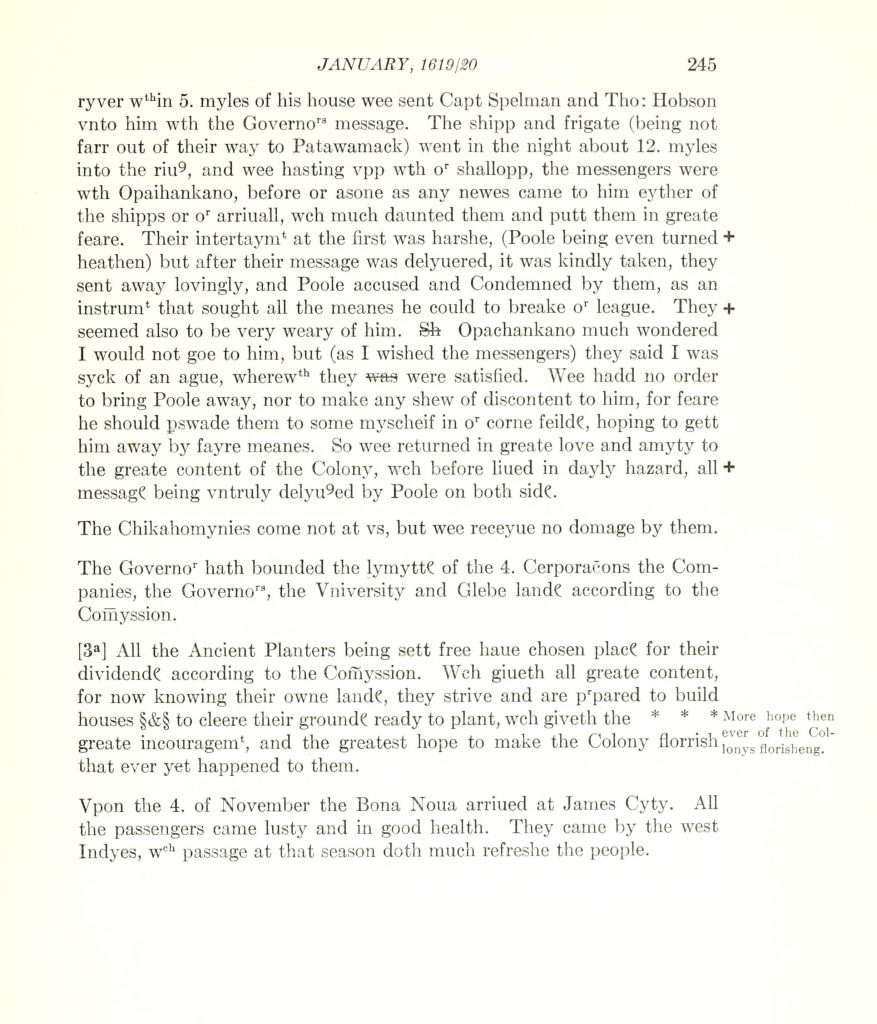 ryver within 5. myles of his house wee sent Capt Spelman and Tho: Hobson unto him with the Governors message. The shipp and frigate (being not farr out of their way to Patawamack) went in the night about 12. myles into the river, and wee hasting upp wth our shallopp, the messengers were with Opaihankano, before or asone as any newes came to him eyther of the shipps or our arrivall, wch much daunted them and putt then in greate feare. Their intertayment at first was harshe, (Poole being even turned heathen) but after their message was delyvered, it was kindly taken, they sent away lovingly, and Poole accused and Condemned by them, as an instrument that sought all the meanes he could to breake our league. They seemed also to be very weary of him. Opachankano much wondered I would not goe to him, but (as I wished the messengers) they said I was syck of an ague, wherewith they were satisfied. Wee hadd no order to bring Poole away, nor to make any shew of discontent to him, for feare he should perswade them to some myscheif in our corne feilds, hoping to gett him away by fayre meanes. So wee returned in greate love and amyty to the greate content of the Colony, wch before lived in dayly hazard, all messages being untruly delyvered by Poole on both sides.

The Chikahomynies come not at us, but wee receyve no domage by them. 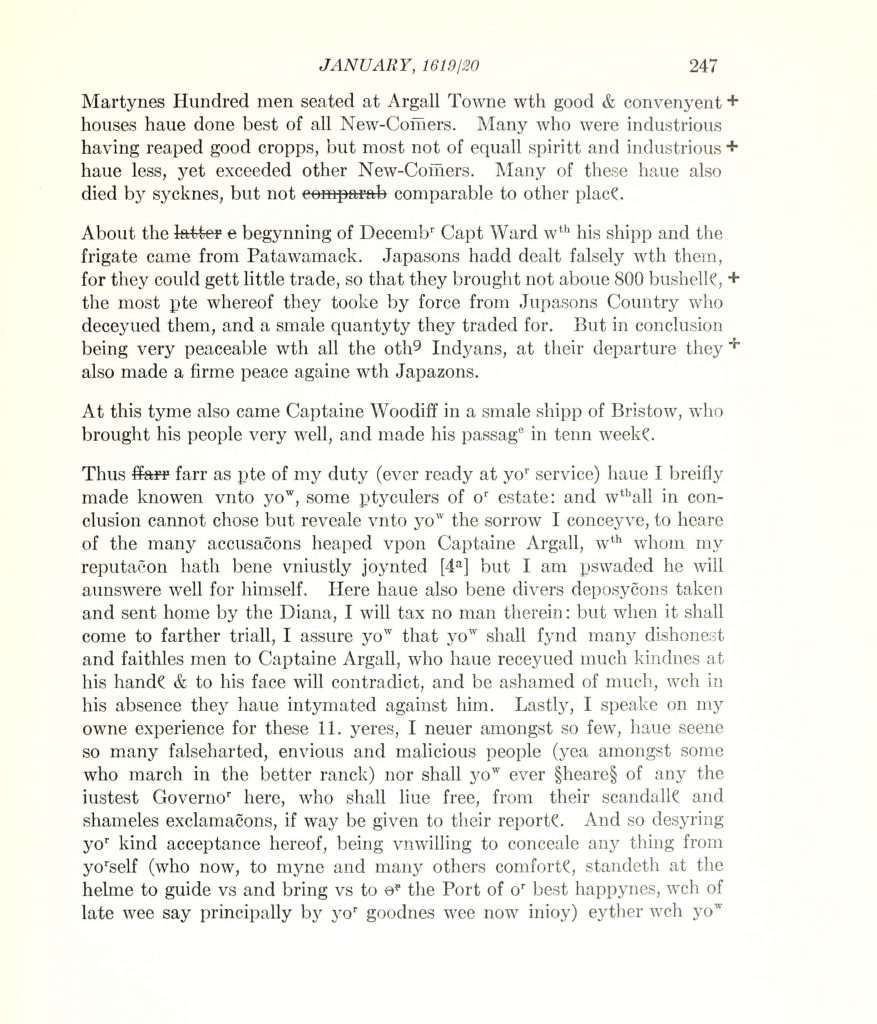 Thus farr as parte of my duty (ever ready at your service) have I breifly made knowen unto yow, some partyculers of our estate: and withall in conclusion cannot chose but reveale unto yow the sorrow I conceyve, to heare of the many accusaccons heaped upon Captaine Argall, with whom my reputaccon hath bene unjustly jointed but I am perswaded he will aunswere well for himself. Here have also bene divers deposyccons taken and sent home by the Diana, I will tax no man therein: but when it shall come to farther triall, I assure yow that yow shall fynd many dishonest and faithles men to Captaine Argall, who have receyved much kindnes at his hands & to his face will contradict, and be ashamed of much, wch in his absence they have intymated against him. Lastly, I speake on my owne experience for these 11. yeres, I never amongst so few, have seene so many falseharted, envious and malicious people (yea amongst some who march in the better ranck) nor shall yow ever heare of any the justest Governor here, who shall live free, from their scandalls and shameles exclamaccons, if way be given to their reports. And so desyring your kind acceptance hereof, being unwilling to conceale any thing from yourself (who now, to myne and many others comforts, standeth at the helme to guide us and bring us to the Port of our best happyness, wch of late wee say principally by your goodnes wee now injoy) eyther wch yow 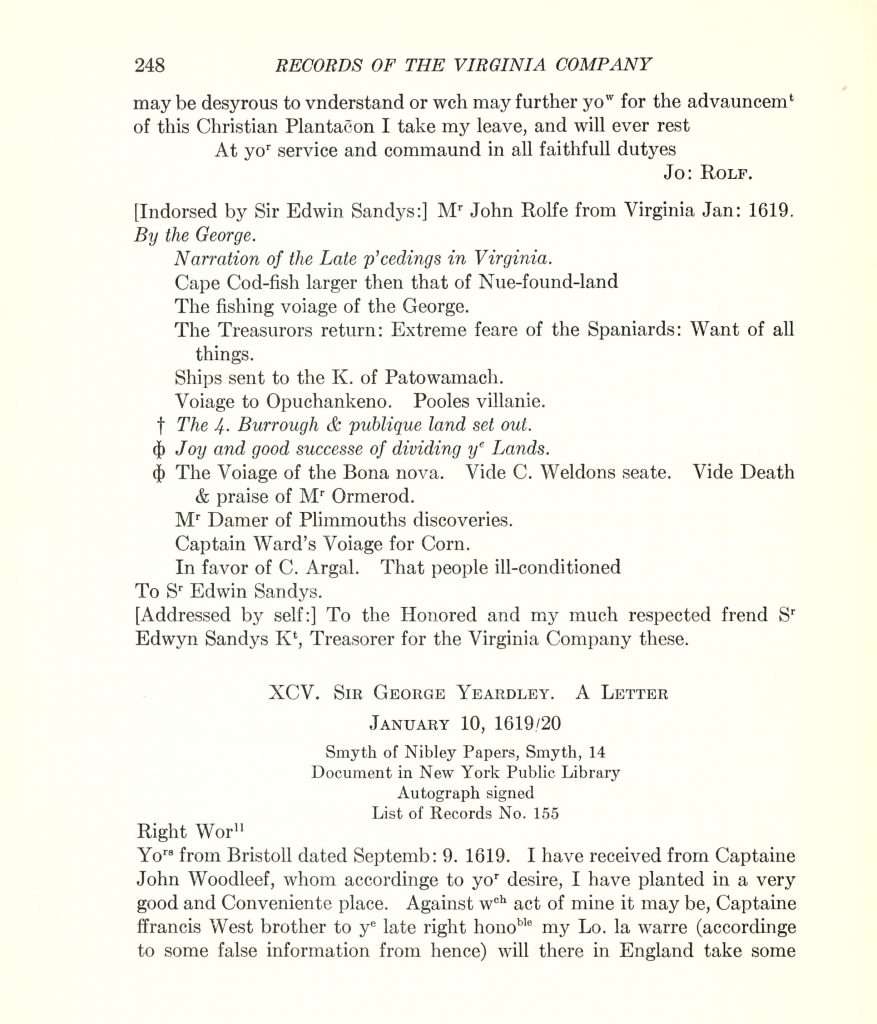 may be desirous to understand or wch may further yow for the advauncement of this Christian Plantaccon I take my leave, and will ever rest

At your service and commaund in all faithfull dutyes