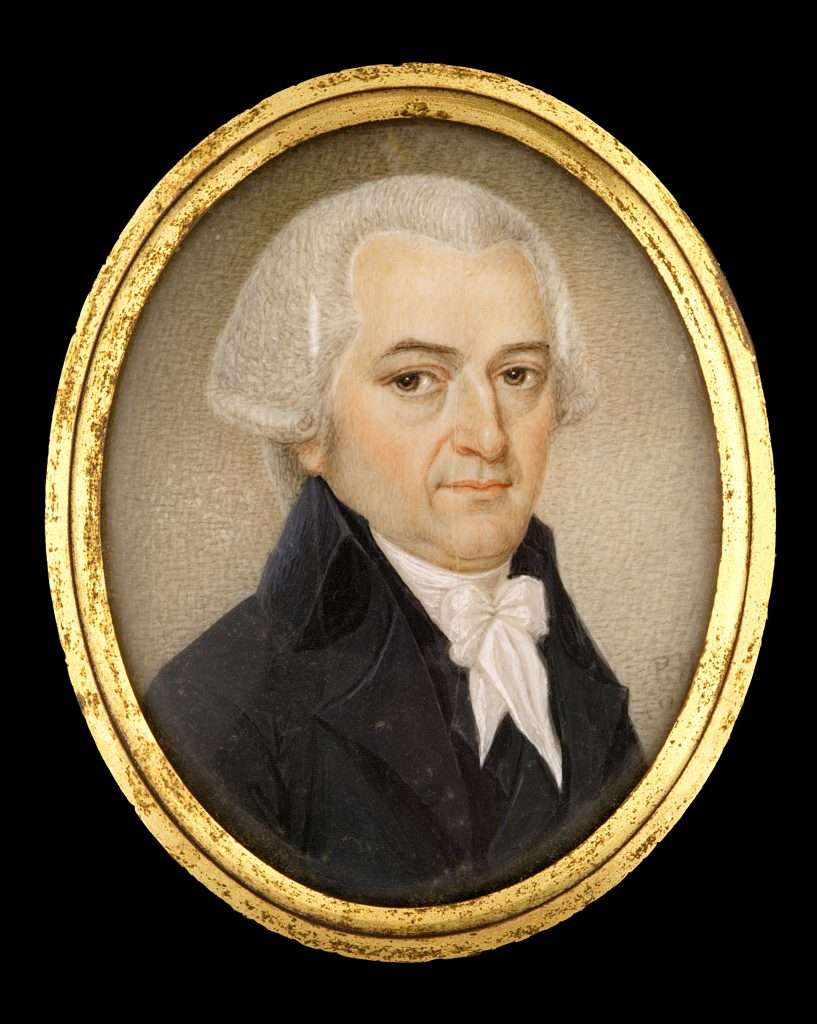 Tucker was born on August 20, 1775, to parents Daniel and Elizabeth Tucker in St. George, St. George’s Island, Bermuda. The Tuckers were a prominent shipping family who did well during the American Revolution (1775–1783) by trading with both the Americans and the British. After being tutored in Latin, literature, philosophy, and law, Tucker left Bermuda for Philadelphia, Pennsylvania, when he was twenty years old, intending to study law in America or London. He encountered immediate financial troubles, however, and after only three days traveled to Williamsburg, Virginia, to seek advice and borrow money from his cousin, St. George Tucker (with whom he is often confused). St. George Tucker was a legal scholar who taught at the College of William and Mary, and he advised the young Tucker to read the law in Williamsburg, which he did.

At first Tucker thought his new academic home was gloomy and unimpressive. Soon, however, he was enjoying social life in Williamsburg, and in 1797, upon graduating, he married his first wife, Mary Byrd Farley, the great-granddaughter of the colonial-era planter and writer from Charles City County William Byrd II. Farley was plagued by health problems even before the marriage, and despite a trip to Bermuda to improve her health, she died two years later. Most of her large estate was willed to Tucker, but due to legal technicalities Tucker spent close to twenty years fighting in court for her property and other valuable assets.

In 1800 Tucker moved to Richmond, where he excelled socially, and in 1802, prompted by news of her pregnancy, married his second wife, Maria Ball Carter, a grandniece of George Washington and a relative of Tucker’s first wife. He was not immediately successful as a lawyer, admitting in his Autobiography that he possessed “neither the requisite self-possession nor fluency” to engage effectively in public arguments. He also failed in his land investments and sank even further into debt. In 1806, Tucker left Richmond and, in an effort to settle those debts, moved his family to the Frederick County home of his in-laws. A year later he was arrested for outstanding loans in Richmond, and after being released on bail he worked hard to establish his financial security.

In 1808 Tucker moved to Pittsylvania County, where he continued to practice law and was appointed commonwealth’s attorney. After twice being defeated in his bid for a seat in the state legislature, he was finally elected to the House of Delegates, where he served one term, from 1815 until 1816. In 1818, he moved to Lynchburg and was elected to the U.S. House of Representatives as a member of the Democratic Republican Party, the party of Jefferson, James Madison, and then-U.S. president James Monroe. Tucker supported the federal bank, opposed government regulation of business, and resolutely opposed slavery. In his Autobiography, Tucker attributes his stance on slavery in part to the experience of being taught to count by a boy of African descent, leaving him with “doubts about the inferiority of the colored race.” He also was influenced by the antislavery views of St. George Tucker. Alarmed by the planned uprising of the slave known as Gabriel in Richmond in 1800, George Tucker, in his earliest publication, composed a letter to the General Assembly arguing that slaves should be freed and colonized outside of the United States. 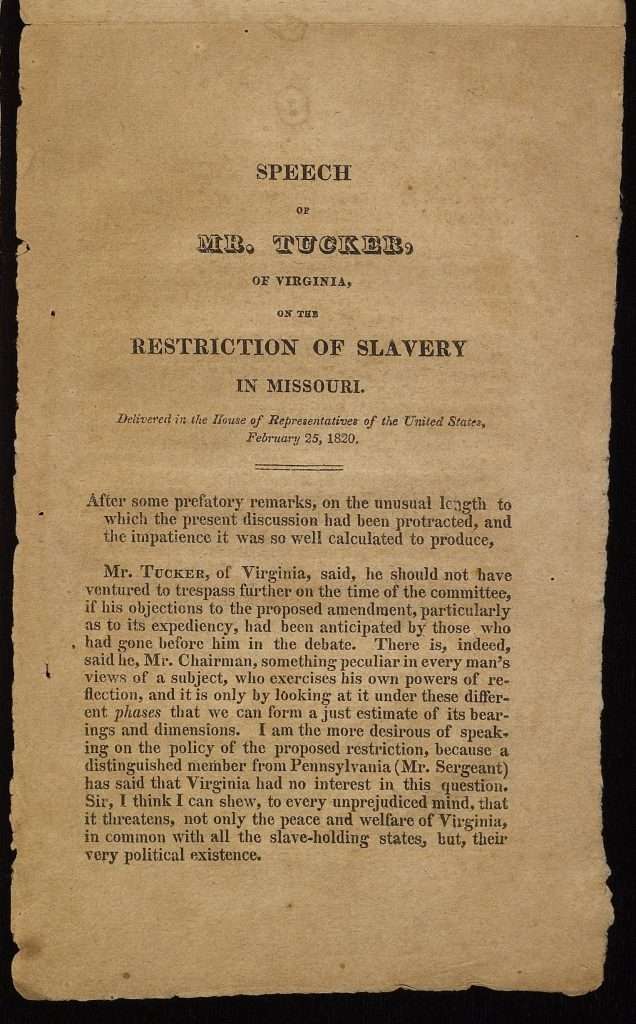 Speech of Mr. Tucker, of Virginia, on the Restriction of Slavery in Missouri

By 1820, however, Tucker had changed his mind about colonization, believing it to be impractical. Through his study of economics and demographics, he instead decided that slavery would die out on its own. He later calculated that slavery could not survive a population density of fifty people per square mile, a circumstance he projected would occur in about 1920. During the 1820 congressional debate over the Missouri Compromise—legislation that made Missouri a slave state and Maine a free state, and restricted the spread of slavery in the former Louisiana Territory north of Missouri’s southern border—he warned that emancipation would be resisted by the South “at every hazard.” Tucker’s 1824 novel The Valley of Shenandoah, one of the first novels of the U.S. South, dramatized his own complex views on slavery. “I freely admit it to be an evil, both moral and political,” the story’s protagonist says about slavery, “[but it] admits of no remedy that is not worse from the disease.”

Beginning in the 1830s, Tucker’s views on slavery began to change again, as he opposed what he considered to be the extreme views of abolitionists and, in so doing, looked for what he considered to be the institution’s redeeming aspects. “In retrospect,” the scholar James Fieser has argued, “Tucker migrated to the wrong side of the issue, and his skills as a philosopher and economist were misdirected.”

Tucker and Maria Ball Carter had six children. Their youngest child, Harriet, died in 1816 at the age of three from whooping cough. The death of Harriet, followed by the passing of the eldest daughter, Eleanor Rosalie, two years after that, propelled Tucker’s wife into a depression. Though doctors advised her to not have any more children, she became pregnant again and eventually died of complications from the pregnancy in 1823. Tucker was devastated by the loss of his wife, and felt that his financial failures contributed to her unhappiness.

The University of Virginia 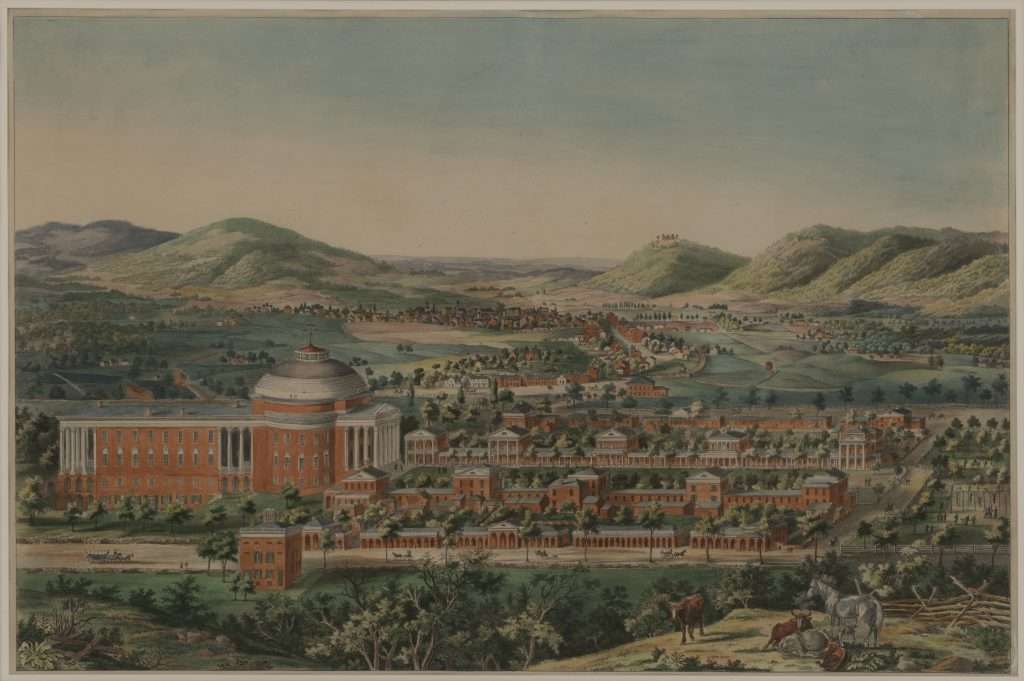 In 1825, Tucker declined to run for a fourth term in the U.S. House of Representatives when it became clear he would likely lose. While in Congress, he had authored Essays on Various Subjects of Taste, Morals, and National Policy (1822), a collection of his philosophical essays that attracted the attention of Thomas Jefferson. In March 1825, at Jefferson’s invitation, Tucker joined the faculty of the new University of Virginia and lectured, in Jefferson’s words, on “mental sciences generally, including Ideology, general grammar, logic and Ethics.”

Tucker had reservations about the job, but finally accepted it, mostly for financial reasons. He stayed in Charlottesville for twenty years, teaching, writing novels and essays, and editing a university journal, the Virginia Literary Museum. Although the new university experienced some problems as a result of financial troubles, Tucker became a well-respected professor and was elected chair of the faculty three times, making him the school’s chief administrator for at least eight years. 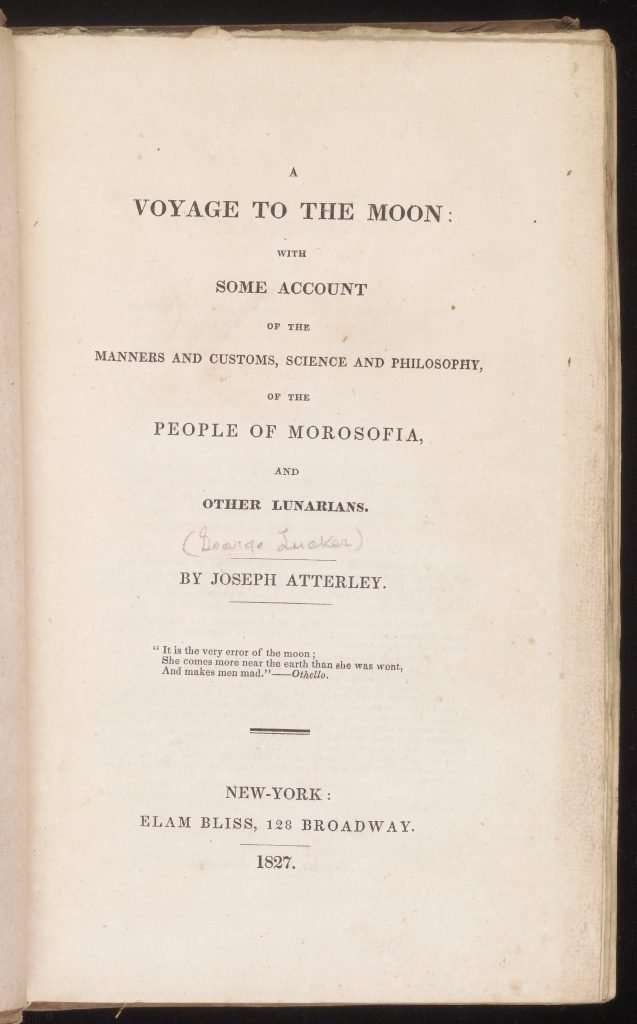 A Voyage to the Moon: With Some Account of the Manners and Customs, Science and Philosophy, of the People of Morosofia, and Other Lunarians.

In 1827, Tucker published the science fiction novel A Voyage to the Moon; with Some Account of the Manners and Customs, Science and Philosophy, of the People of Morosofia, and Other Lunarians. It was a genre experiment undertaken at a time when Edgar Allan Poe—one of American literature’s most famous genre writers—was a student at the University of Virginia. Tucker would later publish articles in the Southern Literary Messenger, which Poe helped to edit from 1835 until 1837. Tucker also wrote a second science fiction novel in 1841, calling it A Century Hence; or, a Romance of 1941. It was not published until 1977.

In 1837, Tucker wrote the first biography of Jefferson, followed by a study of economics in 1839 and of demographics in 1843. While at the University of Virginia, he also wrote on literature, aesthetics, and philosophy. In particular, he displayed an interest in psychology, or what was then called “mental philosophy.” In 1830, he wrote an essay for the Virginia Literary Museum on the subject of Chang and Eng, the famous Thai conjoined identical twins who were “discovered” by a British merchant in 1829 and who later settled in North Carolina and owned slaves. Tucker proposed an interview methodology to settle, through the twins’ experiences, the question of whether human character is primarily developed by nature or through nurture. In 1836, Tucker secured an interview with the twins and published the results through the American Philosophical Society in Philadelphia.

Tucker married his third and final wife, Louisa A. Thompson, in 1828, and in 1845 he retired from teaching and moved to Philadelphia. There, he wrote one of the first comprehensive histories of the United States, the four-volume History of the United States, from Their Colonization to the end of the Twenty-Sixth Congress, in 1841. In it he argues with Jefferson over the former president’s claim, in Notes on the State of Virginia, that slavery is bad for the character of slave owners; to the contrary, according to Tucker, it encouraged qualities of patience and mercy. He also suggested that civil war in the United States was unlikely. Following his history, Tucker published another book on economics and another collection of philosophical essays. 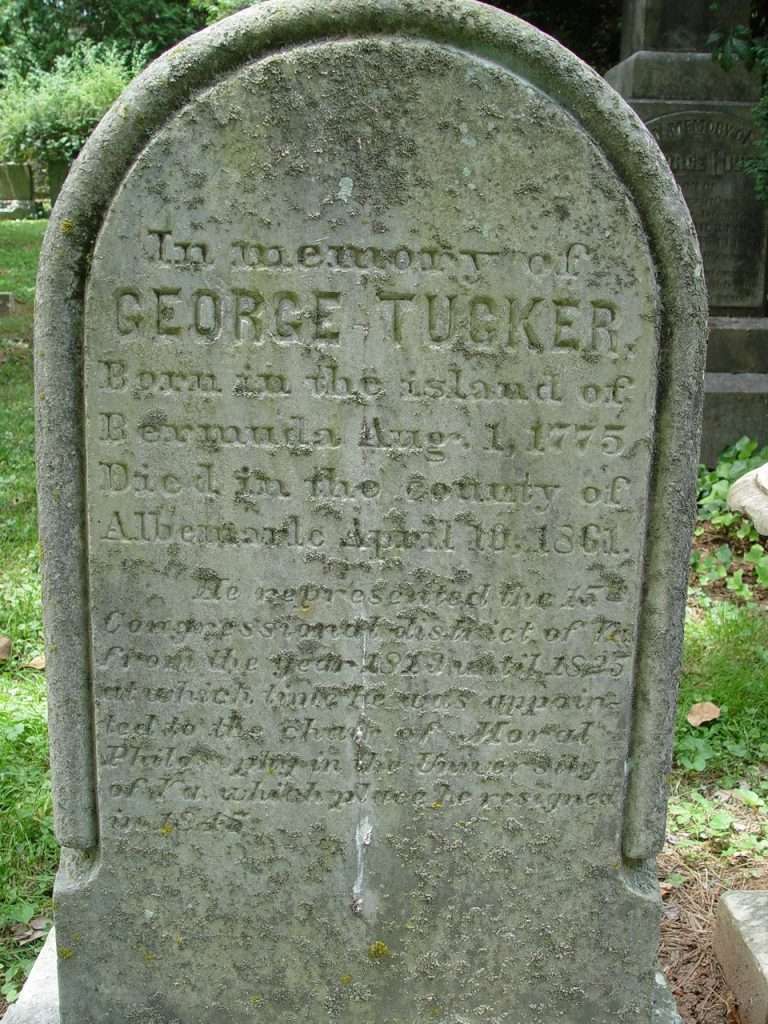 In 1858 his wife died. In February 1861, while on a trip to the South, Tucker was struck by a falling cotton bale on a steamship in Mobile, Alabama. He was unconscious briefly, and spent a short time recuperating before traveling to his daughter’s home in Albemarle County, where he died on April 10, 1861—two days before Confederate artillery fired on Fort Sumter, South Carolina, to begin the American Civil War (1861–1865). He is buried at the University of Virginia Cemetery in Charlottesville.