Skip to content
Author: General AssemblyTranscription Source: William Waller Hening, ed., The Statutes at Large; Being a Collection of All the Laws of Virginia from the First Session of the Legislature in the Year 1619 (New York: R. & W. & G. Bartow, 1814), 1:323–326.
FULL TEXT 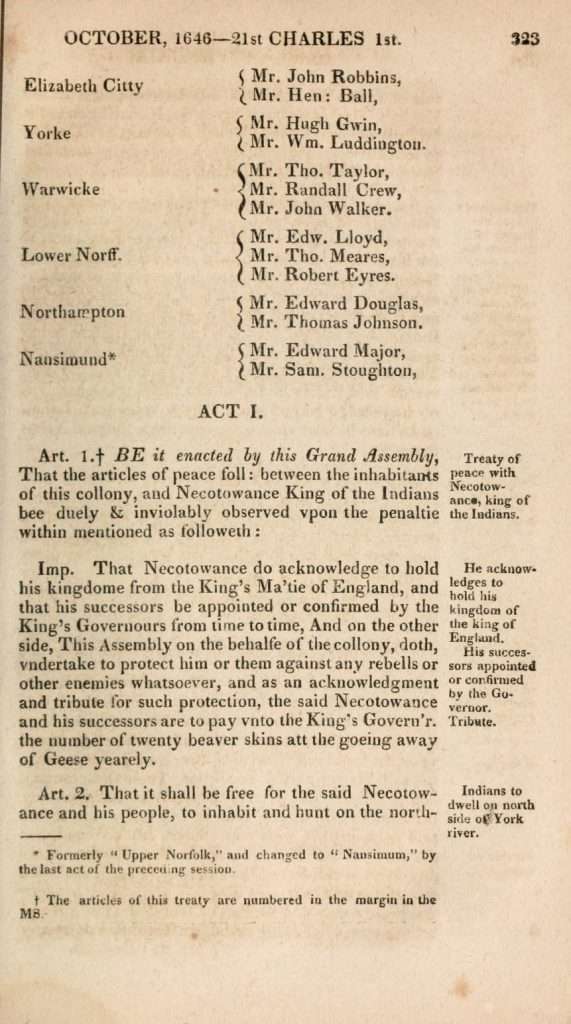 Art. 1. BE it enacted by this Grand Assembly, That the articles of peace foll: between the inhabitants of this collony, and Necotowance King of the Indians bee duely & inviolably observed upon the penaltie within mentioned as followeth:

Imp. That Necotowance do acknowledge to hold his kingdome from the King’s Ma’tie of England, and that his successors be appointed or confirmed by the King’s Governours from time to time, And on the other side, This Assembly on the behalfe of the collony, doth, undertake to protect him or them against any rebells or other enemies whatsoever, and as an acknowledgment and tribute for such protection, the said Necotowance and his successors are to pay unto the King’s Govern’r. the number of twenty beaver skins att the goeing away of Geese yearely.

Art. 2. That it shall be free for the said Necotowance and his people, to inhabit and hunt on the north- 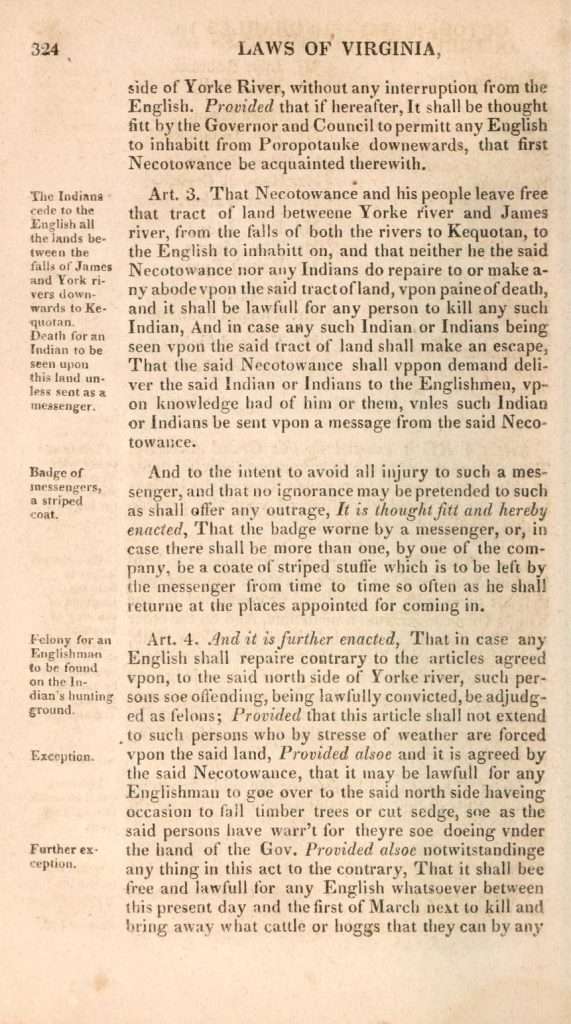 side of Yorke River, without any interruption from the English. Provided that if hereafter, it shall be thought fitt by the Governor and Council to permitt any English to inhabitt from Poropotanke downewards, that first Necotowance be acquainted therewith.

And to the intent to avoid all injury to such a messenger, and that no ignorance may be pretended to such as shall offer any outrage, It is thought fitt and hereby enacted, That the badge worne by a messenger, or, in case there shall be more than one, by one of the company, be a coate of striped stuffe which is to be left by the messenger from time to time so often as he shall returne at the places appointed for coming in.

Art. 4. And it is further enacted, That in case any English shall repaire contrary to the articles agreed upon, to the said north side of Yorke river, such persons soe offending, being lawfully convicted, be adjudged as felons; Provided that this article shall not extend to such persons who by stresse of weather are forced upon the said land, Provided alsoe and it is agreed by the said Necotowance, that it may be lawfull for any Englishman to goe over to the said north side haveing occasion to fall timber trees or cut sedge, soe as the said persons have warr’t for theyre soe doeing under the hand of the Gov. Provided alsoe notwitstandinge any thing in this act to the contrary, That it shall bee free and lawfull for any English whatsoever between this present day and the first of March next to kill and bring away what cattle or hoggs that they can by any 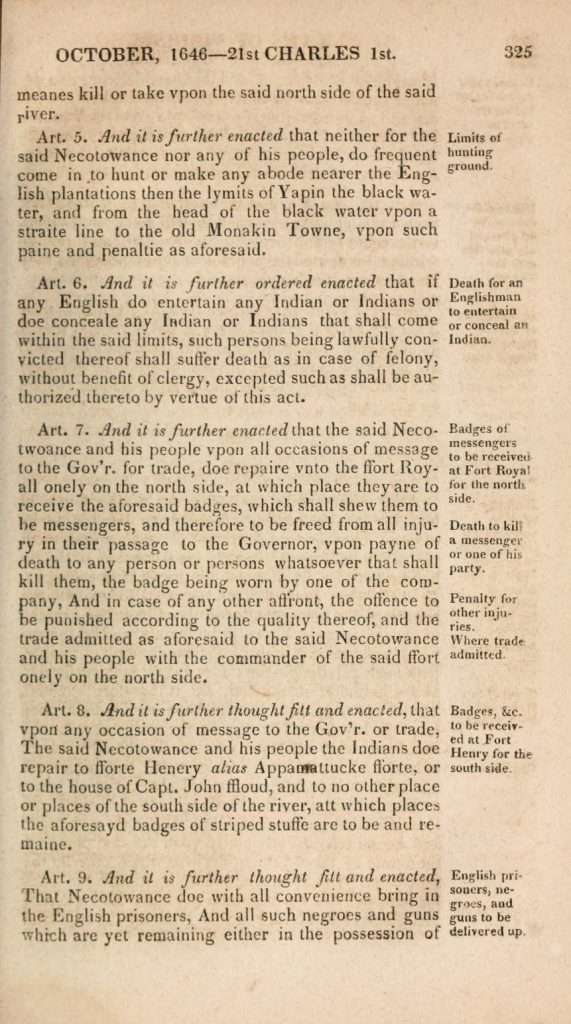 meanes kill or take upon the said north side of the said river.

Art. 5. And it is further enacted that neither for the said Necotowance nor any of his people, do frequent come in to hunt or make any abode nearer the English plantations then the lymits of Yapin the black water, and from the head of the black water upon a straite line to the old Monakin Towne, upon such paine and penaltie as aforesaid.

Art. 6. And it is further ordered enacted that if any English do entertain any Indian or Indians or doe conceale any Indian or Indians that shall come within the said limits, such persons being lawfully convicted thereof shall suffer death as in case of felony, without benefit of clergy, excepted such as shall be authorized thereto by vertue of this act.

Art. 7. And it is further enacted that the said Necotowance and his people upon all occasions of message to the Gov’r. for trade, doe repaire unto the ffort Royall onely on the north side, at which place they are to receive the aforesaid badges, which shall shew them to be messengers, and therefore to be freed from all injury in their passage to the Governor, upon payne of death to any person or persons whatsoever that shall kill them, the badge being worn by one of the company, And in case of any other affront, the offence to be punished according to the quality thereof, and the trade admitted as aforesaid to the said Necotowance and his people with the commander of the said ffort onely on the north side.

Art. 8. And it is further thought fitt and enacted, that upon any occasion of message to the Gov’r. or trade, The said Necotowance and his people the Indians doe repair to fforte Henery alias Appamattucke fforte, or to the house of Capt. John ffloud, and to no other place or places of the south side of the river, att which places the aforesayd badges of striped stuff are to be and remaine.

Art. 9. And it is further thought fitt and enacted, That Necotowance doe with all convenience bring in the English prisoners, And all such negroes and guns which are yet remaining either in the possession of 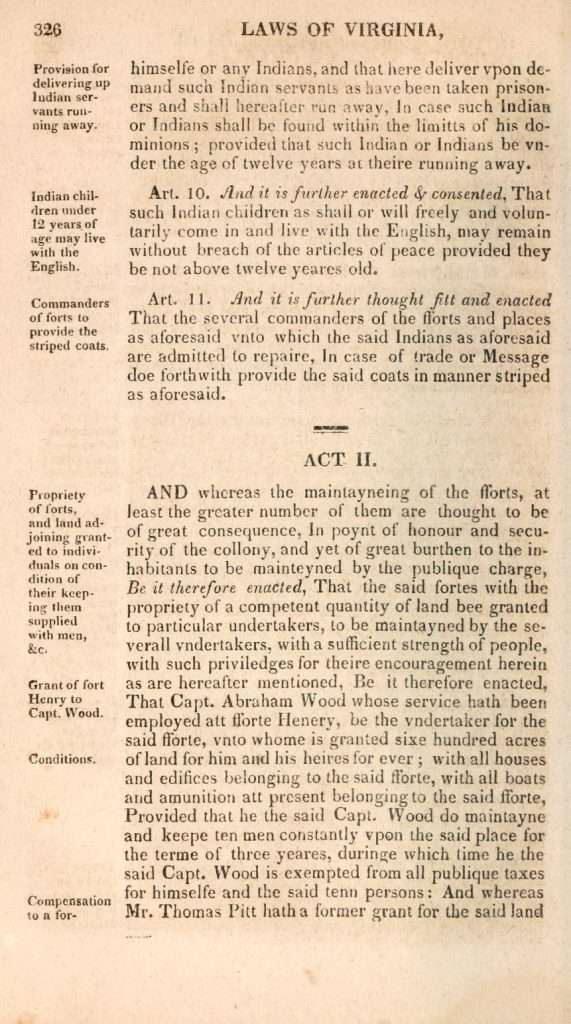 Art. 10. and it is further enacted & consented, That such Indian children as shall or will freely and voluntarily come in and live with the English, may remain without breach of the articles of peace provided they be not above twelve yeares old.

Art. 11. And it is further thought fitt and enacted That the several commanders of the fforts and places as aforesaid unto which the said Indians as aforesaid are admitted to repaire, In case of trade or Message doe forthwith provide the said coats in manner striped as aforesaid.