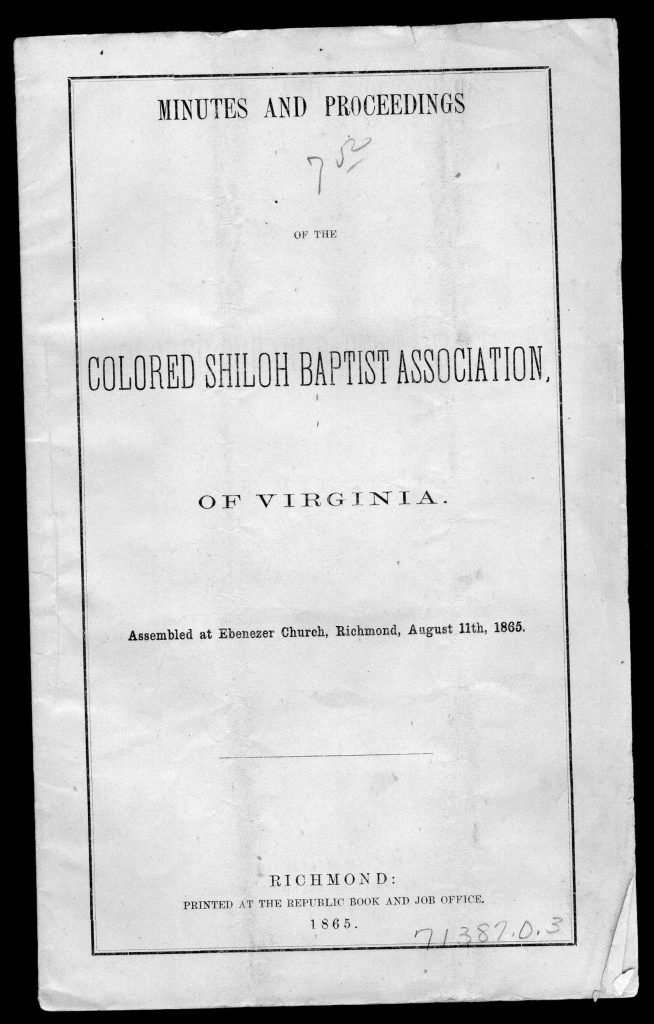 Minutes and Proceedings of the Colored Shiloh Baptist Association, of Virginia

Toler was likely born into slavery about 1822 in Hanover County, but the exact date of his birth and the names of his parents are not recorded, nor are the circumstances under which he became free. His name was sometimes rendered in public records as Burrell Toler. He married a woman named Sallie, who was likely enslaved and whose last name may have been Shelton. They had at least one daughter and five sons, the eldest of whom was born early in the 1860s. Toler likely served in some religious capacity before the end of the American Civil War (1861–1865) because he became a minister soon after hostilities ended. The Colored Shiloh Baptist Association ordained him as a minister on August 13, 1865. The next month he received authorization to perform marriages in Henrico, and by 1866 he was performing marriages in Hanover County as well.

In the years after the war Toler helped organize churches in Caroline, Goochland, Hanover, and King George counties, and served as the first minister at Shiloh Baptist Church, in Ashland, and Abner Baptist and Jerusalem Baptist churches, in Hanover. A letter dated May 3, 1867, from an agent of the Bureau of Refugees, Freedmen, and Abandoned Lands requested that a horse be provided for Toler to facilitate his travel around the area and so he could dedicate himself to preaching. The Freedmen’s Bureau agent wrote that Toler “devoted the most of his time to the good of his people, and his course has been such as to elicit the respect and confidence of all classes of citizens.”

During this period Toler became active in local and state politics. On April 17, 1867, he had represented Hanover County at the Republican State Convention held in Richmond‘s First African Baptist Church. The gathering consisted of more than 100 delegates from across the state meeting in reaction to the Reconstruction Acts that had been passed by Congress. These measures placed the former Confederate states under military rule and designated Virginia as Military District Number One, commanded by Major General John M. Schofield. In August Toler represented Hanover County at another convention of state Republicans.

On October 22, Toler was elected to a convention called to rewrite the state constitution that, in accordance with Reconstruction Acts, would pave the way for Virginia’s readmittance into the Union. In the first election in which African Americans could vote, the radical Toler faced John B. Crenshaw, a Quaker leader who sided with the Republican Party’s conservative wing. In racially polarized voting, Toler won by a total of 2,050 votes to 1,514 votes to sit as an at-large delegate representing Hanover and Henrico counties.

During the convention, which met from December 3, 1867, to April 17, 1868, Toler served on the Committee of Thirteen, which established procedures for the convention. He was also appointed to the Committee on Taxation and Finance, from which he was later removed, and appointed instead to the Committee on Public Institutions. In January 1868 he offered a resolution to authorize an investigation of the Eastern Lunatic Asylum (later Eastern State Hospital), then under military authority, in anticipation of its reversion to state control.

According to newspaper accounts Toler gave at least two speeches during the convention, both showing frustration with the white political establishment. On February 3, he spoke in opposition to a residency requirement for the governor, insisting that the person elected by the majority should represent them no matter his race or any other factor. Three weeks later he supported voting rights for African Americans, firing back against claims that blacks were inferior and arguing that since he was licensed to preach and could speak in public, he should have the right to vote.

At the convention General Schofield described Toler as “Colored. Laborer. Illiterate and ignorant. Radical.” On November 12, 1867, the Staunton Spectator reprinted an article from the New York World that caustically compared Toler with earlier Hanover County political leaders Patrick Henry and Henry Clay. He voted with the Radicals on nearly all issues that came up during the convention, although he did side with the Conservatives against requiring racial integration in public schools. His support for disfranchising former Confederate officials angered some Hanover residents who accused him of violating a pledge he made before the election not to vote for a test-oath clause. On April 17, 1868, he joined the majority in approving the new constitution, which mandated universal manhood suffrage, created a new system of publicly funded schools, and transformed the organization of county government.

Listed as a forty-eight-year-old preacher and carpenter in the 1870 census, he reported to the census enumerator a personal estate of $200. On January 1, 1871, he purchased twenty-five acres of land near Ashland for $300, most of which he owned until his death. In 1879–1880 he served as the moderator for the recently established Mattaponi Baptist Association of Virginia. Toler died in Hanover County on July 21, 1880. His place of burial is not known.