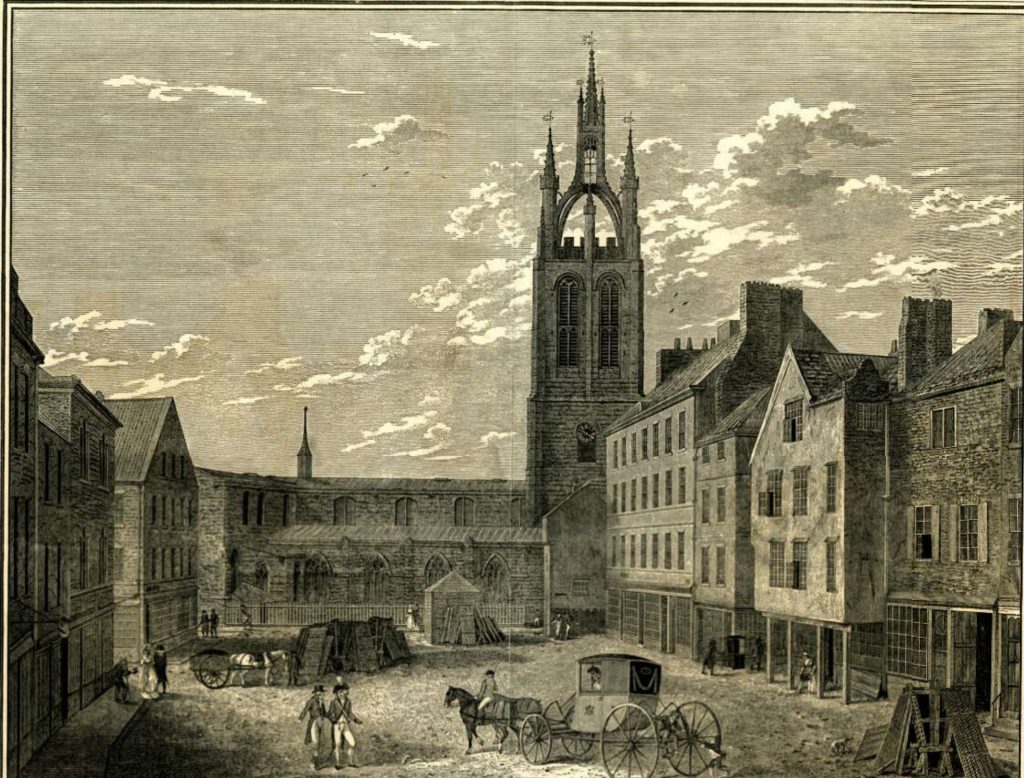 Hall was born in or near Newcastle upon Tyne in late 1602 or early 1603 and was christened with the name of Thomasin. As a child, Hall, who lived with her mother, wore girls’ clothing. At the age of twelve, Hall’s mother sent her to live in London with an aunt. During the ten years that Hall lived in London, it is likely that she received training in domestic skills such as needlework, brewing, baking, tending a kitchen garden, and making cheese, butter, and home remedies. 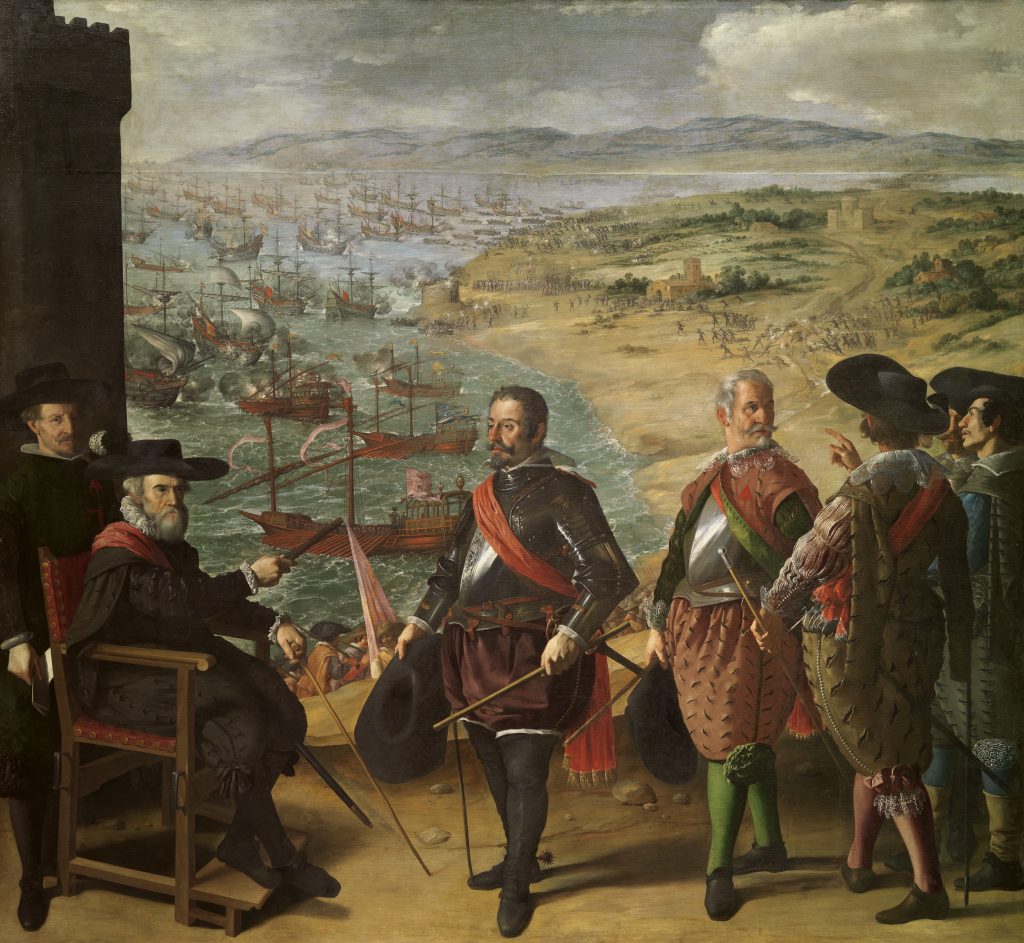 The Defence of Cadiz Against the English

In 1625, Hall joined the English army using the name Thomas Hall, possibly to serve alongside or for a brother in the English forces that fought against Spain. Hall, according to a later deposition, “Cut of[f] his [hair] and Changed his apparell into the fashion of man.” Hall served in the 1625 Cádiz naval expedition against Spanish forces. Two years later, Hall saw action in the siege of Saint-Martin-de-Ré on Ré Island off the west coast of France. Having survived two military expeditions that ended in defeat for the English, Thomas Hall left the army. Hall settled in Plymouth, where he said he “changed himselfe into woemans apparell and made bone lace and did other worke wth his needle.” Thomasin Hall lived in Plymouth until sometime in 1628, when she again donned men’s clothing and journeyed across the Atlantic Ocean to Virginia as Thomas Hall. 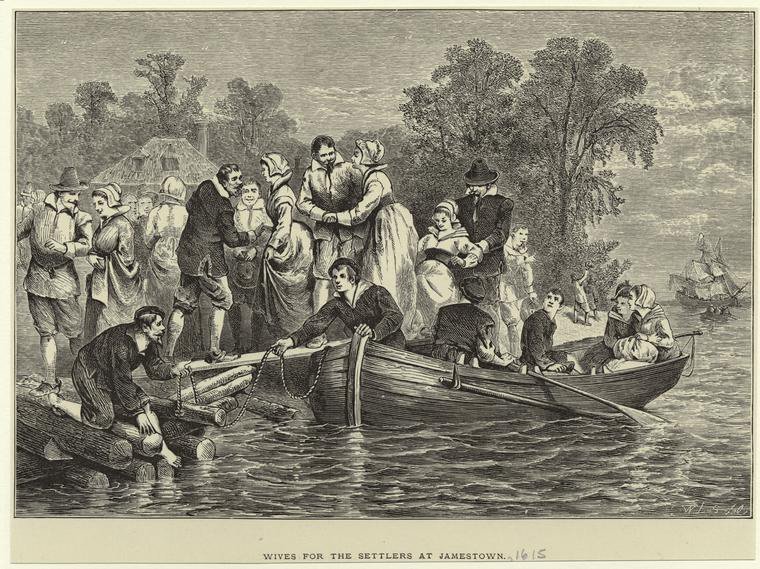 Wives for the Settlers at Jamestown.

Hall arrived at Jamestown in late 1628 dressed as a man. However, Hall switched out of men’s clothing and dressed and presented as a woman before agreeing to a contract to serve as an indentured servant to John Tyos and Robert Eyres. Hall’s decision to present as a woman could reflect what Hall had learned about conditions in early Virginia—that with male indentured servants outnumbering women indentured servants six to one, there was a shortage of women to perform traditionally female domestic tasks. As one who possessed domestic skills, Hall might have seen an advantage in presenting as a woman to avoid working in the tobacco fields.

Tyos and Eyres took Hall to Treasurer’s Plantation, a settlement across from Jamestown on the south side of the James River in present-day Surry County, to do domestic work. However, in early February 1629, a colonist named Mr. Stacy reported that he thought Hall was both “a man and woeman.” This could have been an indication that Hall had been seen wearing both men’s and women’s attire or based on rumors that Hall had engaged in sexual intercourse with a woman servant. 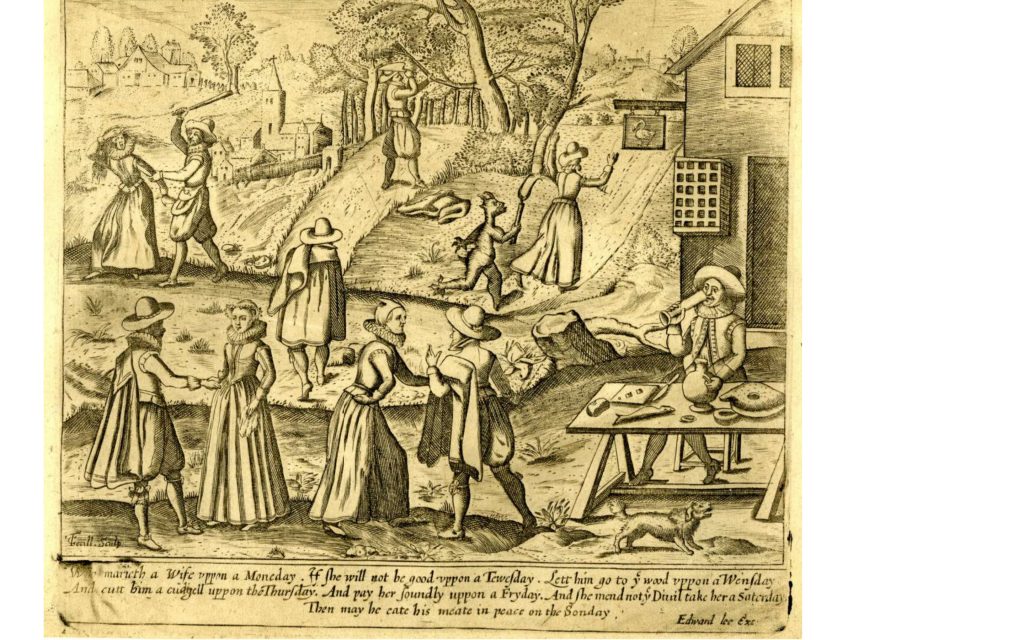 Gender Conventions in the Seventeenth Century

Stacy’s pronouncement brought Hall to the attention of local residents. In particular, Hall caught the interest of several local married women: Dorothy Rodes and Barbara Hall from Treasurer’s Plantation and Alice Long from Basse’s Choice, a nearby settlement in Warrosquyoake (present day Isle of Wight County). One day, Hall was confronted by these women, who demanded to know whether Hall was a man or a woman. They claimed the authority to investigate Hall’s body because Hall wore women’s clothing, and English courts gave women authority to search female bodies if the evidence would be crucial to a case. The women examined Hall’s body and did not find evidence that Hall could give birth to a child, so they announced “that hee was a man.”

Hall’s master Tyos, however, “swore the said Hall was a woeman,” although he had not examined the body of his servant. When John Atkins, a resident of Warrosquyoake, wanted to acquire Hall’s contract from Tyos and Eyres, he turned to Nathaniel Basse, the commander of Basse’s Choice, for a ruling on the question of Hall’s gender. When Basse asked Hall “whether hee were man or woeman,” Hall replied that “hee was both.” Hall said that he had “a peece of fleshe growing at the … belly as bigg as the topp of his little finger,” but said that he did not have use of what he called a “mans parte.” 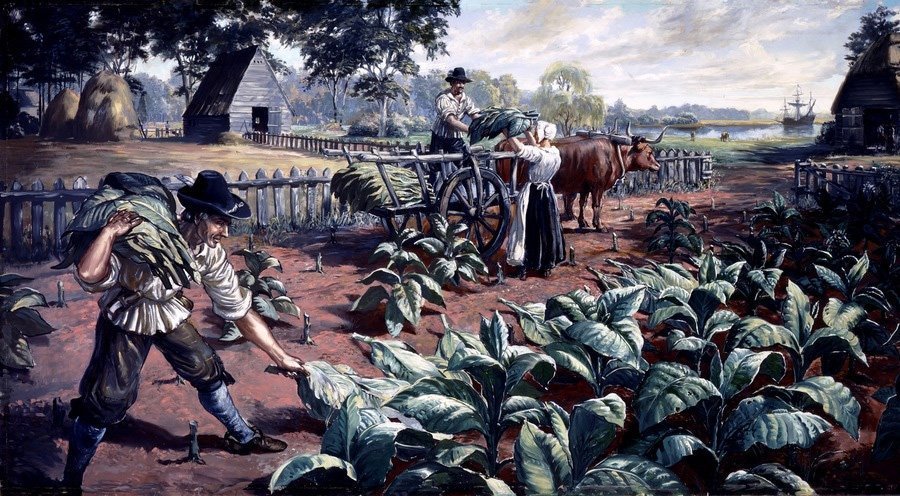 Basse determined that Hall was a woman and ordered Hall to “bee put in woemans apparell.” Hall became Atkins’s indentured servant soon after, laboring for him as a domestic servant. However, Basse’s ruling had undermined the authority of the women in the community who had examined Hall and determined him a man. Rodes, Hall, and Long decided to reexamine Hall before they could challenge Basse’s decision. On about February 12, 1629, the three women examined Hall as Hall slept and again concluded that Hall was a man. Next, they asked Atkins to join them in an examination of his servant. Initially, Atkins refused. But on the following Sunday, Rodes, Hall, Long and two additional women went to Atkins’s house and examined Hall in the presence of Atkins. When Atkins “asked him if that were all hee had,” Hall replied, “I have a peece of an hole.” Atkins then told Hall “to lye on his backe and shew the same.” After this examination, Atkins agreed with the women that Hall was a man and ordered Hall to wear men’s clothing. The following day, Atkins informed Basse that he believed Hall to be a man and asked him to punish Hall for “his abuse.”

This did not end the community’s curiosity about Hall. In late February, Hall was accosted a fourth time by two local men, Francis England and Richard Rodes, who was the master of the maid known as “greate Besse” with whom Hall was rumored to have had sexual intercourse. They threw Hall to the ground and forcibly examined Hall to see “what thou carriest” and determined that Hall was a man. 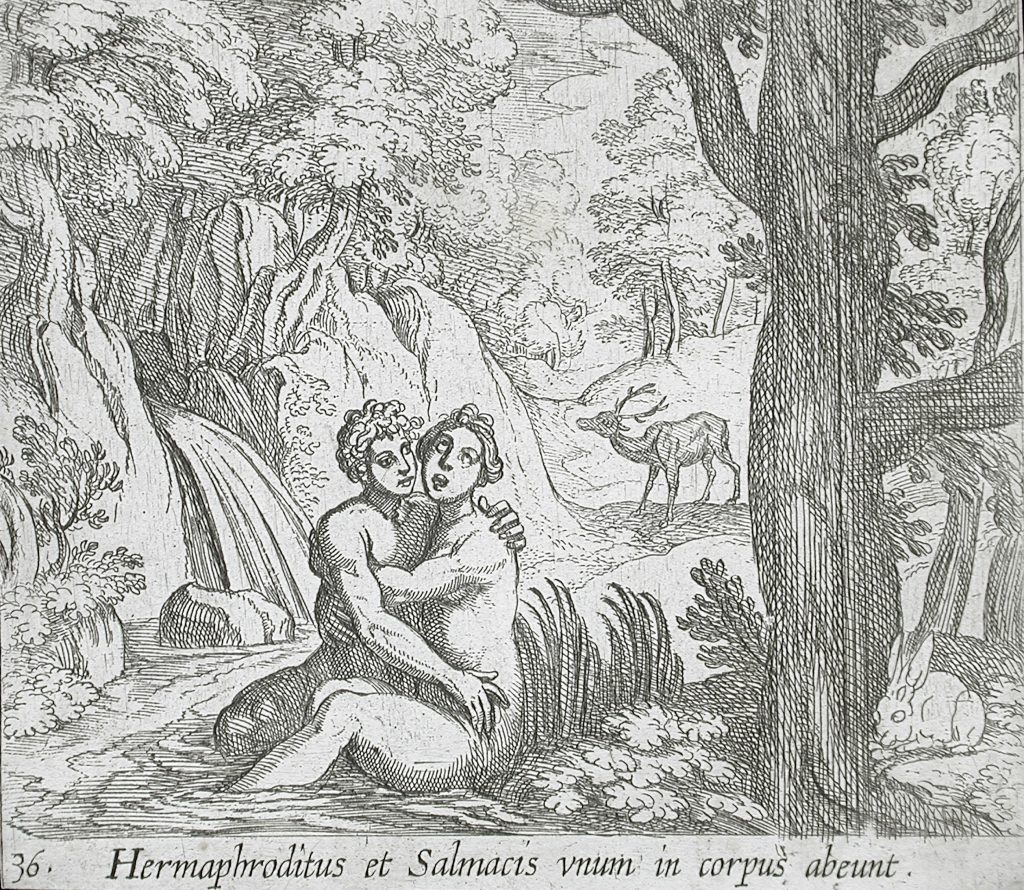 Surviving records do not indicate when rumors about Hall reached Jamestown or why the colony’s leadership became involved in the assessment of Hall’s gender. Basse may have asked the General Court, which was composed of the members of the governor’s Council and the governor, to make a decision about Hall’s identity because he wanted to put an end to the ongoing conflict in his community about Hall. On April 8, 1629, the General Court convened at the statehouse at Jamestown and reviewed the sworn testimony of Atkins and England, as well as Hall’s testimony. They declined to summon the women who examined Hall or conduct a physical examination of Hall. In keeping with Hall’s own description, they ruled that Hall was “a man and a woeman” and ordered publication of their ruling so that residents of Warrosquyoake “may take notice thereof.” The court also required Hall to post a bond to ensure “his good behavior” and, as an indication of Hall’s unique gender identity, ordered Hall to wear men’s clothing but with a “Coyfe and Croscloth,” which were distinctly female head coverings, and an apron.

This was a relatively mild punishment for Hall’s transgression of gender norms that upheld Hall’s self-definition of a dual gender identity. But it restricted Hall’s ability to move between gender identities, as well as marking Hall as an outlier in the community. It also protected colonial leaders’ authority against the efforts of married women to police their communities in matters of gender and sexuality. After the General Court hearing, Hall disappeared from the historical record.

Thomas/in Hall is born in or near Newcastle upon Tyne, christened with the name Thomasin Hall, and brought up as a girl.

Thomasin Hall moves to London to live with her aunt and learn domestic skills.

Thomas Hall leaves the English army, returns to England, and lives as Thomasin Hall in Plymouth, supporting herself by making lace and doing needlework.

Mr. Stacy reports that he thinks Thomas/in Hall is “a man and woeman.”

Alice Long, Dorothy Rodes, and Barbara Hall examine Thomasin Hall at the house of Nicholas Eyres and conclude that Hall is a man; John Tyos claims that Hall is a woman.

Nathaniel Basse questions Thomas/in Hall, who avers that “hee was both” a man and a woman. Basse determines that Hall is a woman and orders Hall to wear women’s clothing.

Alice Long, Dorothy Rodes, and Barbara Hall reexamine Thomas/in Hall as Hall sleeps and conclude that Hall is a man.

John Atkins reports the results of the previous day’s examination to Nathaniel Basse and asks Basse to punish Thomas/in Hall “for his abuse.”

Francis England and John Atkins travel to Jamestown and give depositions in the presence of Governor John Pott.

The General Court convenes to determine Hall’s gender and rules that Hall is both male and female; they order Hall to wear men’s clothing with an apron and female headgear.