George Henry Thomas was born in Southampton County on July 31, 1816, the youngest son of a wealthy, slave-owning family of planters. He attended the United States Military Academy at West Point, New York, from 1836 until 1840 and finished twelfth in a class of forty-two. (His classmates included Sherman and the future Confederate general Richard S. Ewell.) Thomas would spend the rest of his life in military service.

He received a brevet promotion for distinguished service fighting the Seminole Indians in Florida in 1841 and two more for courage at the battles of Monterrey (1846) and Buena Vista (1847) during the Mexican War, making him one of the most decorated junior officers in the pre–Civil War army. After Mexico, Thomas served from 1851 until 1854 as an instructor of artillery and cavalry tactics at West Point, where he met and married Frances Lucretia Kellogg, the daughter of a New York merchant. The couple had a happy marriage, but no children. From 1854 until 1855, Thomas served at Fort Yuma, Arizona, and from 1855 until 1860 he served in Texas as a major in the 2nd Cavalry.

When the secession crisis began, Thomas was on furlough, recovering from a severe back injury. Thinking himself too badly injured to return to active service, he sought a position as instructor at the Virginia Military Institute in Lexington in January 1861. In March, he turned down an unsolicited offer to serve in the Virginia state militia, and when he was called back to active service after the surrender of Fort Sumter at Charleston Harbor, South Carolina, on April 14, he immediately reported for duty.

Thomas struggled over whether to remain in the army or to resign his commission and join Virginia and the Confederacy. Ultimately, he sided with the Union. After the war, he explained that he felt his oath as an army officer to uphold the United States Constitution and to protect the national government left him no other choice. Thomas’s Virginia relatives refused to speak to him after he sided with the Union, and while he later reconciled with his brothers, his sisters remained estranged from him until his death.

During the First Manassas Campaign (1861), Thomas served as the head of cavalry for a force that invaded Virginia (now West Virginia) near Martinsburg, and he fought a brief skirmish against J. E. B. Stuart, commanding the Confederate cavalry. In August 1861, Thomas was promoted to brigadier general of volunteers and transferred to Kentucky, where he took charge of a camp of Union recruits south of Frankfort. On January 19, 1862, his force of slightly over 4,000 men decisively defeated a Confederate force of equal size at the Battle of Mill Springs. This victory secured eastern Kentucky for the Union and brought Thomas to national attention. 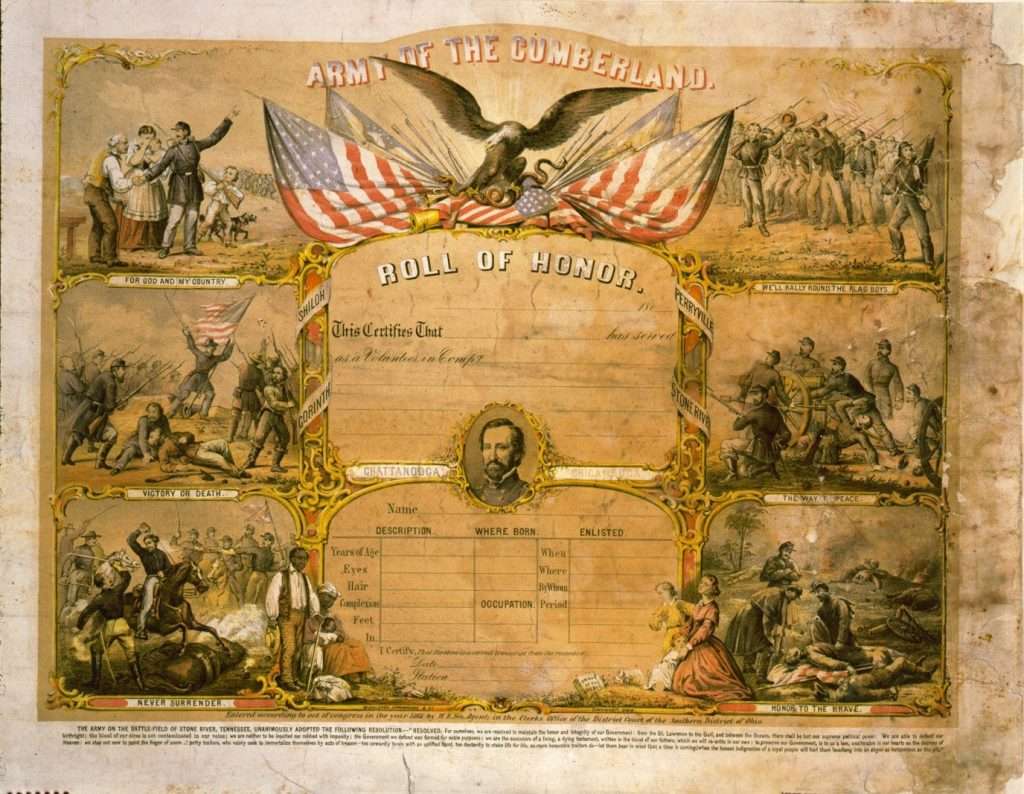 Army of the Cumberland Certificate

After Mill Springs, Thomas served under Don Carlos Buell during the Shiloh and Perryville campaigns (1862) in Kentucky, but was not present at either battle. When U.S. president Abraham Lincoln attempted to replace Buell with Thomas during the Perryville Campaign, Thomas refused, stating that he did not want others to think he had schemed against his superior officer. After the Battle of Perryville, the War Department relieved Buell from command but did not replace him with Thomas, instead promoting William S. Rosecrans.

Thomas served effectively under Rosecrans as a corps commander in the Army of the Cumberland, the main Union force in Tennessee. He fought in the Battle of Stone’s River, which lasted from December 31, 1862, until January 2, 1863, and the campaign that followed, which culminated in the capture of Chattanooga, Tennessee. Thomas’s most important test came during the battle that followed the capture of Chattanooga, fought on September 19–20, 1863, just south of that city, in the woods and hills of northern Georgia near West Chickamauga Creek.

Thomas’s corps occupied the northern flank of the Union line at Chickamauga, and received the brunt of the Confederate attacks on the first day of the battle. Throughout the day, Thomas skillfully maintained a defensive line and 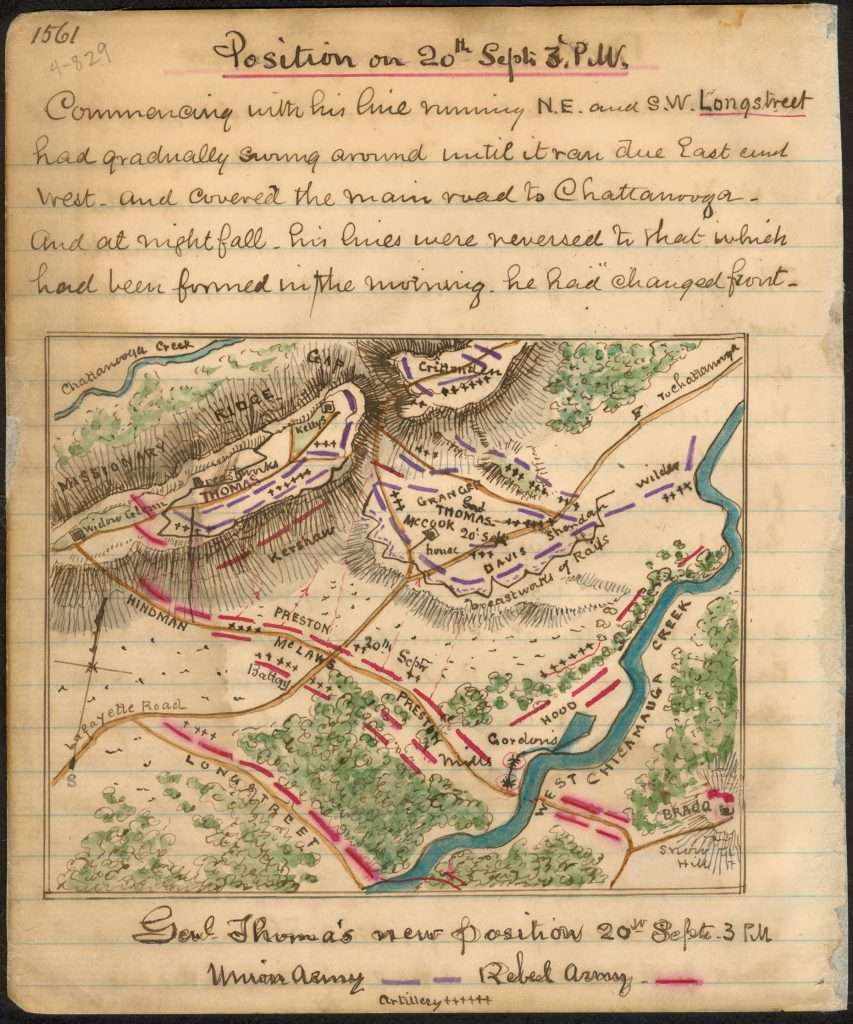 counterattacked to recover lost ground. On the second day of the battle, a series of errors and miscommunications between Rosecrans and his subordinates left a gap in the center of the Union line. James Longstreet, commanding a Confederate corps sent to Tennessee from Robert E. Lee‘s Army of Northern Virginia, launched an attack directly into the gap. Longstreet’s men poured through the hole in Union lines and spread out, attacking the Union forces in the flank and rear. Most of the Union army fled the field, along with Rosecrans and two of the army’s corps commanders. By noon, Thomas’s corps was the only organized force still on the field.

Thomas improvised a defensive line and held off repeated attacks from a numerically superior opponent. He led several counterattacks in person, at great risk, and his stand held the Confederate army at bay until nightfall, preventing them from pursuing and destroying the rest of the Union army. Lincoln remarked that “it is doubtful whether his heroism and skill … has ever been surpassed in this world,” and Thomas is known as “the Rock of Chickamauga” to this day.

After Chickamauga, Thomas was promoted to command of the Army of the Cumberland. He was still subordinate to Ulysses S. Grant, however, whom Lincoln had appointed to run the war in the West and who traveled to Chattanooga to command in person. Thomas served effectively as Grant’s subordinate during the Battle of Chattanooga, November 23–25, 1863, where his men spontaneously charged the Confederate lines atop Missionary Ridge and sent the Confederates into retreat. Thomas served under William T. Sherman during the 1864 Atlanta Campaign and fought in a number of engagements, including Kennesaw Mountain and Peachtree Creek, Georgia.

After the capture of Atlanta, Sherman took most of the Union army on his march through Georgia and the Carolinas, leaving Thomas with a mix of veteran and garrison troops to defend Tennessee. John Bell Hood, the commander of the Confederate Army of Tennessee, decided not to follow Sherman south, instead turning north and invading Tennessee. Thomas concentrated his forces at Nashville and prepared a counterstroke. He attacked Hood outside the city on December 15, 1864, and in a two-day battle crushed Hood’s army. This left Tennessee in secure Union control and rendered Mississippi, Alabama, and Georgia vulnerable to Union raids.

Thomas commanded African American troops during the Battle of Nashville, and their bravery during the battle permanently changed his views on race. He had been a racial conservative during most of the war, but he changed after Nashville and became a staunch supporter of the rights of freedmen. From 1865 to 1869 he commanded the Union forces occupying Kentucky and Tennessee, and at different times his district also included Georgia, Mississippi, Alabama, and West Virginia.

During Reconstruction, Thomas used his military power to protect African Americans from white violence and economic exploitation and sent troops to safeguard the polls so that freedmen could vote. When local courts refused to prosecute whites for attacking blacks, Thomas tried them in military tribunals. When local city officials adopted discriminatory racial policies, he threatened them with military detention. Thomas recognized early the power and organization of the Ku Klux Klan and tried to stamp out the organization with military force. Unfortunately, these efforts failed as a result of a lack of troops on the ground and the refusal of local white civil authorities to cooperate.

Thomas was assigned to command of the Department of the Pacific in 1869 and he died of a stroke in San Francisco, California, on March 28, 1870. He was the first major Union general to die after the Civil War, and his coffin was greeted by crowds throughout its transfer back to the East. Grant, then the U.S. president, and many senior government officials attended a large public funeral at Thomas’s wife’s church in Troy, New York. In 1879, veterans erected a monument in his memory in Washington, D.C., where it still stands at the center of Thomas Circle. 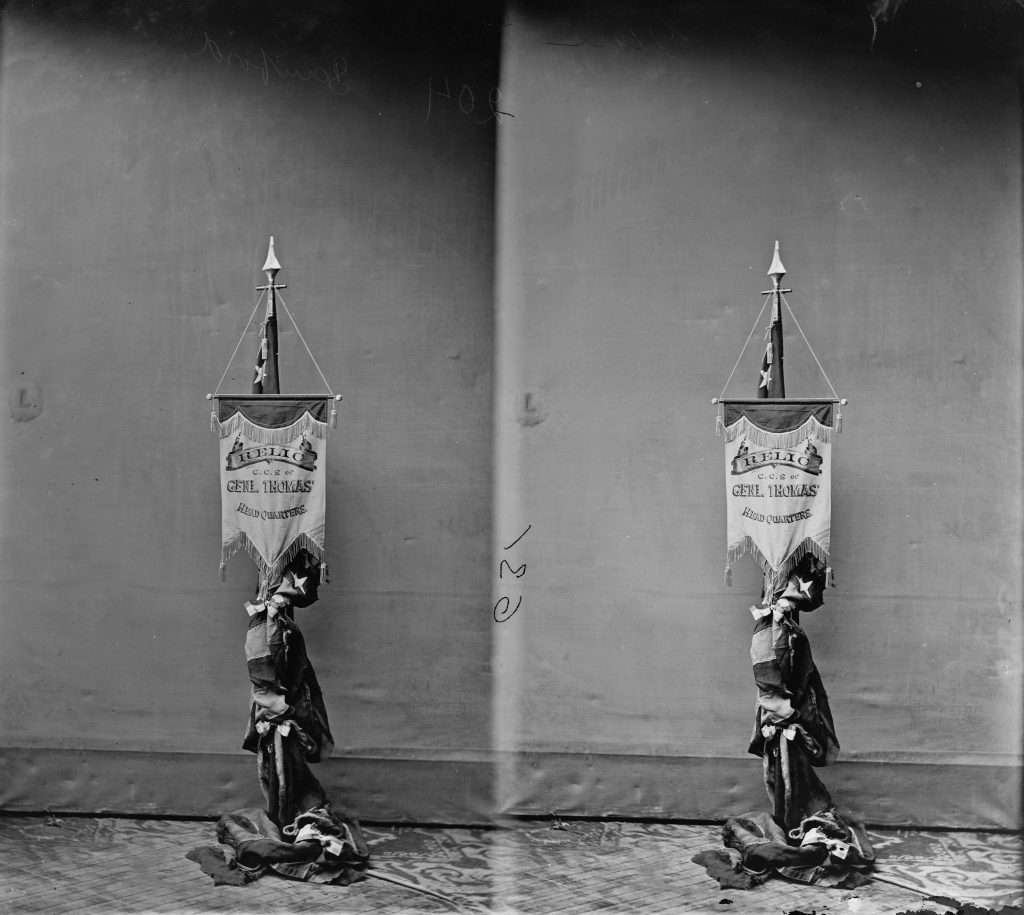 After Grant and Sherman, Thomas made perhaps the largest contribution of any Union general to the success of the Union war effort. Particularly important were his stand at Chickamauga, which denied the Confederacy the chance to destroy a Union army, and his victory at Nashville, which neutralized the main Confederate army in the Western Theater. Northerners admired Thomas during and immediately after the war as the example of a loyal Southerner, who made the “right” choice during secession. As the two sections reconciled late in the 1800s and early in the 1900s, Thomas’s reputation declined. Today, his significance to history lies not only in his military record, but also in his conversion from slave owner to defender of civil rights.