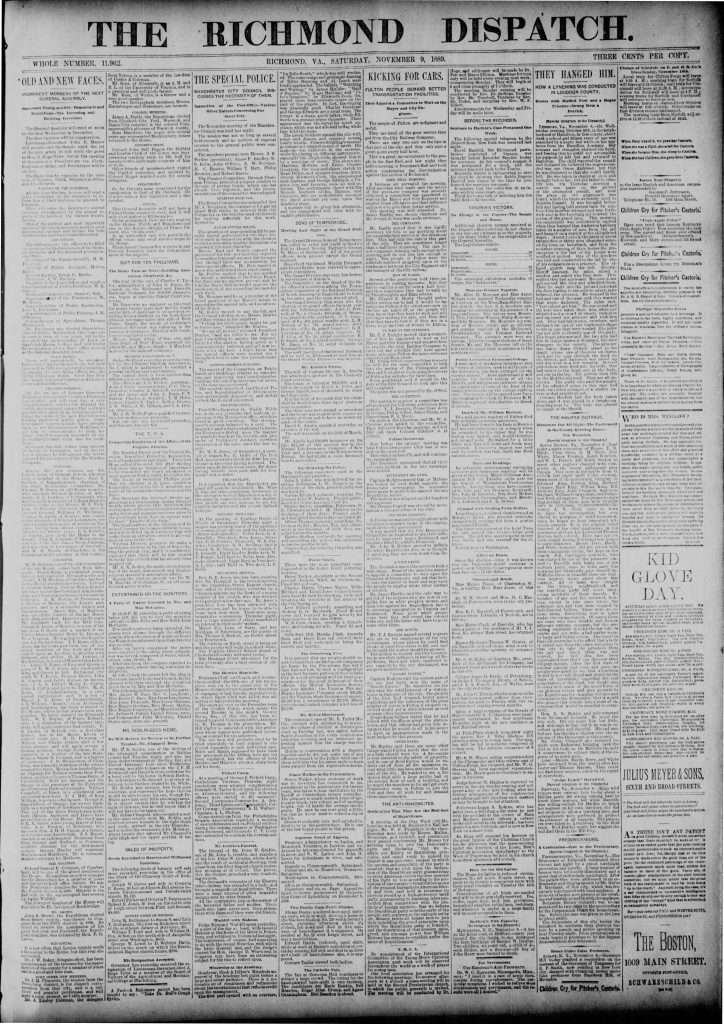 HOW A LYNCHING WAS CONDUCTED IN LOUDOUN COUNTY.

Horses with Muffled Feet and a Bogus Prisoner—Swung from a Derrick.

[Special telegram to the Dispatch.]

Leesburg, Va., November 8.—On Wednesday evening, October 30th, in the neighborhood of Hamilton, in this county, about dusk a school-girl fifteen years of age was assaulted by a negro boy while on her way home from the Hamilton Academy. Her screams and struggles alarmed the fiend, and fearing that he could not accomplish his purpose he left her and returned to Hamilton. The child reported the assault and declared she believed the negro scoundrel was one Owen Anderson, but that he was disguised so that she could hardly tell. He was taken in charge at once and brought before her, but she failed to identify him. On Thursday morning a search was made on the ground of the attempted assault, and near the place an old guano-sack was found, which the brute evidently used to disguise himself. It was brought before him and having told several tales he confessed his horrible attempt and was forthwith sent to the Leesburg jail to await the action of the grand jury. This morning the community was considerably excited when they learned that Anderson had been taken by a number of men from the jail and hanged on a derrick at the old railroad depôt. About 1 o'clock the party of about twenty-five or thirty men, disguised entered the town on horseback, and from the noiseless stepping of their horses the presumption is the feet of the horses were muffled or unshod. One of the lynchers was tied and conducted to the jail by two of his companions as a prisoner. The alleged guards rang the bell. Deputy-Sheriff Laycock, the jailer, raised a window and asked who they were. They replied they had a prisoner. He came down and opened the door and admitted them. Then he went into the jail and unlocked the door leading to the cells to admit, as he believed, the prisoner. He stepped in the hall and one of the posse said they wanted that negro Anderson. The jailer said, "You cannot get him." He was seized and the keys were taken from him, when one whistled and a crowd of twenty rushed in and captured the prisoner and took him out. They had taken axes, crowbars, and sledges from one of our blacksmith shops to use in case they were needed. The jailer was not able to identify any of the party. The bogus prisoner and the two who had him in charge were not disguised, but were strangers to the county. The prisoner was taken down Church street to the depôt, where one of the posse on horseback put the rope through the hook on the derrick, and Anderson was raised up and was dead in a few minutes. Several pistol-shots were fired into his body. One ball struck in the head, one in the body, and one in the leg. The parties then left by the Middleburg road. They are all unknown. The party who paid the penalty of his admitted crime in this case had made two other attempts of a similar nature in that neighborhood.

Coroner Hockett had the body taken down and it was placed in a freight-car standing near by. The body was placed in charge of the Sheriff.