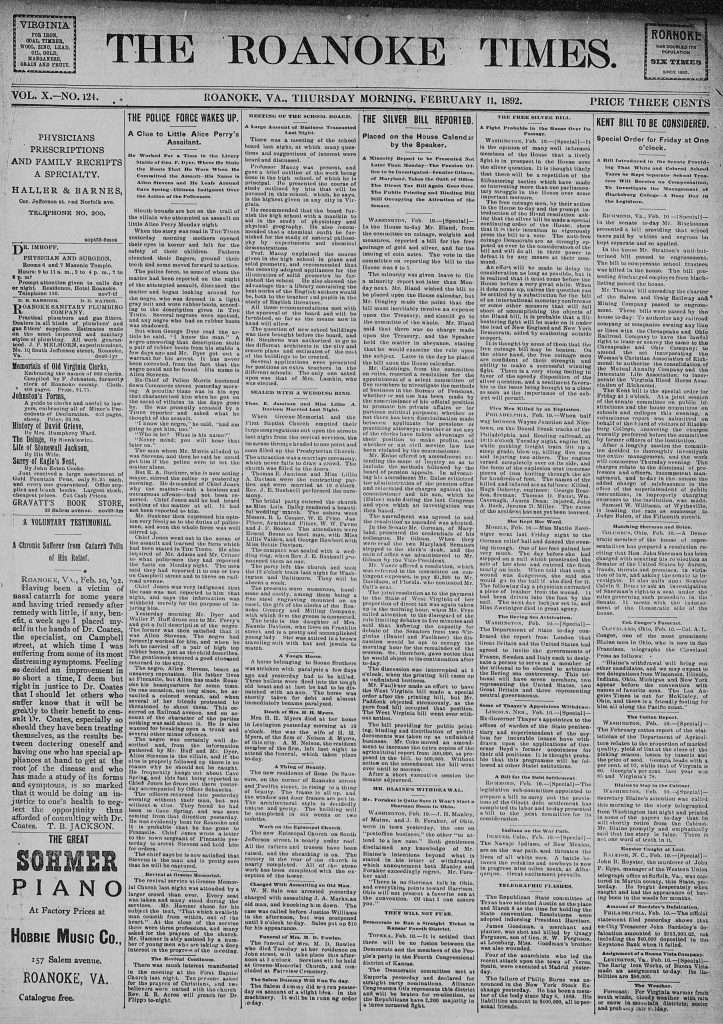 THE POLICE FORCE WAKES UP.

He Worked For a Time in the Livery Stable of Geo. F. Dyer, Where He Stole the Boots That He Wore When He Committed the Assault—His Name is Allen Stevens and He Loafs Around Cave Spring—Citizens Indignant Over the Action of the Policemen.

Sleuth-hounds are hot on the trail of the villain who attempted an assault on the little Alice Perry Monday night.

When the story was read in The Times yesterday morning mothers opened their eyes in horror and felt for the safety of their children. Fathers clenched their fingers, ground their teeth and some moved forward to action.

The police force, to some of whom the matter had been reported on the night of the attempted assault, discussed the matter and began looking around for the negro, who was dressed in a light gray suit and wore rubber boots, according to the description given in The Times. Several negroes were spotted, and any negro who had on rubber boots was shadowed.

But when George Dyer read the article he said, "I know the man." A negro answering that description stole a pair of rubber boots from his stable a few days ago and Mr. Dyer got out a warrant for his arrest. It has never been executed, from the fact that the negro could not be found. His name is Allen Stevens.

Ex-Chief of Police Morris hastened down Commerce street yesterday morning. A peculiar blaze was in his eye that characterized him when he got on the scent of villains in the days gone by. He was promptly accosted by a Times reporter and asked what he thought of the assault.

"Never mind; you will hear that later on."

The man whom Mr. Morris alluded to was Stevens, and then he said he could get him if the police were to let the matter alone.

Mr. Buckner then expressed his opinion very freely as to the duties of policemen, and soon the whole force was well stirred up.

Chief Jones went out to the scene of the assault and learned the facts which had been stated in The Times. He also inquired of Mr. Adams and Mr. Critzer to what policemen they had reported the facts on Monday night. The men said they had reported it to one or two on Campbell street and to three on railroad avenue.

Chief Jones was very indignant that the case was not reported to him that night, and says the information was withheld merely for the purpose of injuring him.

Yesterday morning Mr. Dyer and Waller P. Huff drove out to Mr. Perry's and got a full description of the negro. The former was then satisfied that it was Allen Stevens. The negro had formerly worked for him, and when he left he carried off a pair of high top rubber boots, just as the child describes. The gentlemen secured a good clue and returned to the city.

The negro, Allen Steven, bears an unsavory reputation. His father lives at Fincastle, but Allen has made Roanoke his headquarters for some time. On one occasion, not long since, he assaulted a colored woman, and when several of her friends protested he threatened to shoot them. This occurred on Railroad avenue, and on account of the character of the parties nothing was said about it. He is also wanted for breaking open a trunk and several other minor offences.

The negro was certainly well described and, from the information gathered by Mr. Huff and Mr. Dyer, Allen Stevens is the villain, and if the clue is properly followed up there is no reason why he should not be caught. He frequently hangs out about Cave Spring, and this fact being reported to Chief Jones he drove out there yesterday accompanied by Officer Schancks.

The officers returned late yesterday evening without their man, but not without a clue. They found he had been to Cave Spring, and was seen coming from that direction yesterday. He was evidently bent for Roanoke and it is probable that he was gone to Fincastle. Chief Jones wrote a letter to the town sergeant of Fincastle yesterday to arrest Stevens and hold him for orders.

The chief says he is now satisfied that Stevens is the man and is pretty sure that he will be captured.