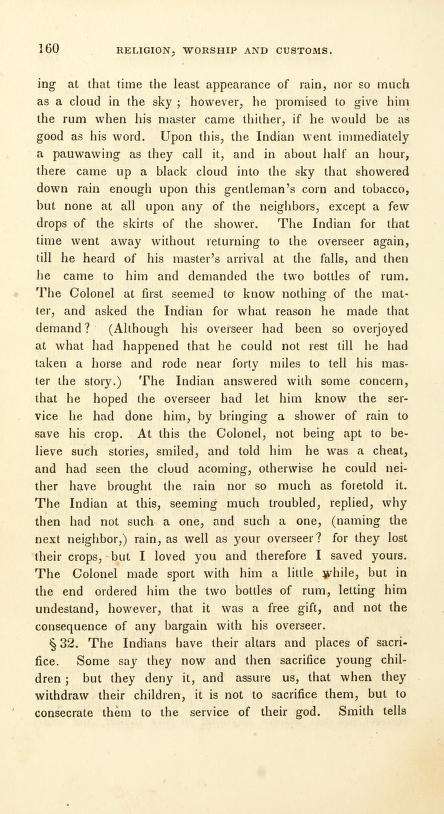 The Indians have their altars and places of sacrifice. Some say they now and then sacrifice young children; but they deny it, and assure us, that when they withdraw their children, it is not to sacrifice them, but to consecrate them to the service of their god. Smith tells 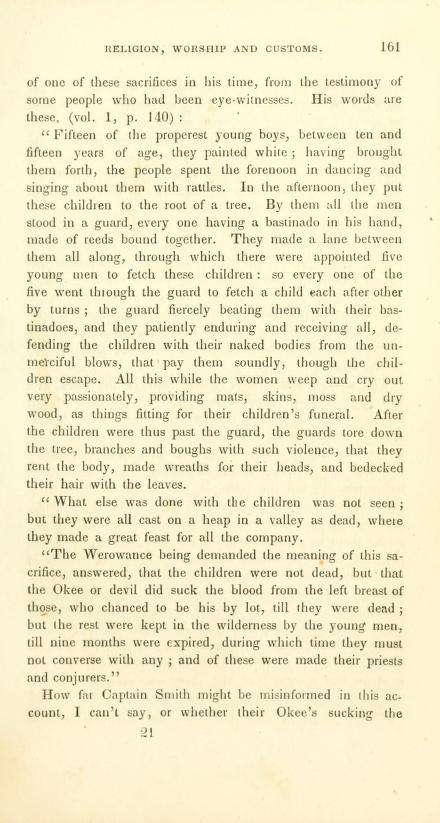 of one of these sacrifices in his time, from the testimony of some people who had been eye-witnesses. His words are these, (vol. 1, p. 140):

“Fifteen of the properest young boys, between ten and fifteen years of age, they painted white; having brought them forth, the people spent the forenoon in dancing and singing about them with rattles. In the afternoon, they put these children to the root of a tree. By them all the men stood in a guard, every one having a bastinado in his hand, made of reeds bound together. They made a lane between them all along, through which there were appointed five young men to fetch these children: so every one of the five went through the guard to fetch a child each after other by turns; the guard fiercely beating them with their bastinadoes, and they patiently enduring and receiving all, defending the children with their naked bodies from the unmerciful blows, that pay them soundly, though the children escape. All this while the women weep and cry out very passionately, providing mats, skins, moss and dry wood, as things fitting for their children’s funeral. After the children were thus past the guard, the guards tore down the tree, branches and boughs with such violence, that they rent the body, made wreaths for their heads, and bedecked their hair with the leaves.

“What else was done with the children was not seen; but they were all cast on a heap in a valley as dead, where they made a great feast for all the company.

“The Werowance being demanded the meaning of this sacrifice, answered, that the children were not dead, but that the Okee or devil did suck the blood from the left breast of those, who chanced to be his by lot, till they were dead; but the rest were kept in the wilderness by the young men, till nine months were expired, during which time they must not converse with any; and of these were made their priests and conjurers.”

How far Captain Smith might be misinformed in this account, I can’t say, or whether their Okee’s sucking the 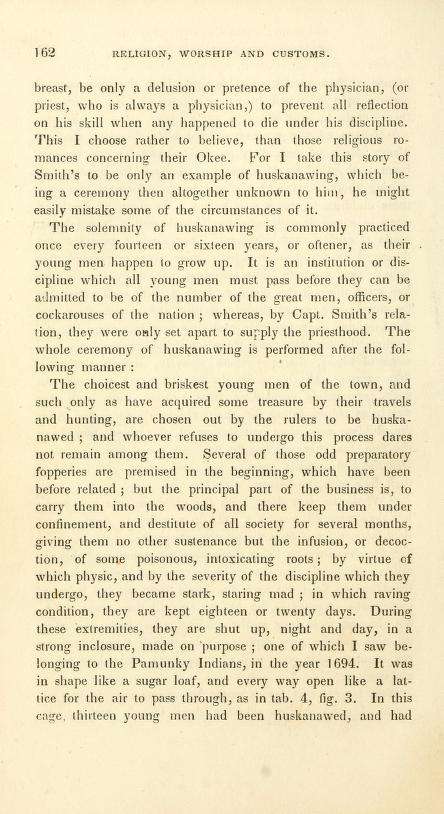 breast, be only a delusion or pretence of the physician, (or priest, who is always a physician,) to prevent all reflection on his skill when any happened to die under his discipline. This I choose rather to believe, than those religious romances concerning their Okee. For I take this story of Smith’s to be only an example of huskanawing, which being a ceremony then altogether unknown to him, he might easily mistake some of the circumstances of it.

The solemnity of huskanawing is commonly practiced once every fourteen or sixteen years, or oftener, as their young men happen to grow up. It is an institution or discipline which all young men must pass before they can be admitted to be of the number of the great men, officers, or cockarouses of the nation; whereas, by Capt. Smith’s relation, they were only set apart to supply the priesthood. The whole ceremony of huskanawing is performed after the following manner:

The choicest and briskest young men of the town, and such only as have acquired some treasure by their travels and hunting, are chosen out by the rulers to be huskanawed; and whoever refuses to undergo this process dares not remain among them. Several of those odd preparatory fopperies are premised in the beginning, which have been before related; but the principal part of the business is, to carry them into the woods, and there keep them under confinement, and destitute of all society for several months, giving them no other sustenance but the infusion, or decoction, of some poisonous, intoxicating roots; by virtue of which physic, and by the severity of the discipline which they undergo, they became stark, staring mad; in which raving condition, they are kept eighteen or twenty days. During these extremities, they are shut up, night and day, in a strong inclosure, made on purpose; one of which I saw belonging to the Pamunky Indians, in the year 1694. It was in shape like a sugar loaf, and every way open like a lattice for the air to pass through, as in tab. 4, fig. 3. In this cage, thirteen young men had been huskanawed, and had 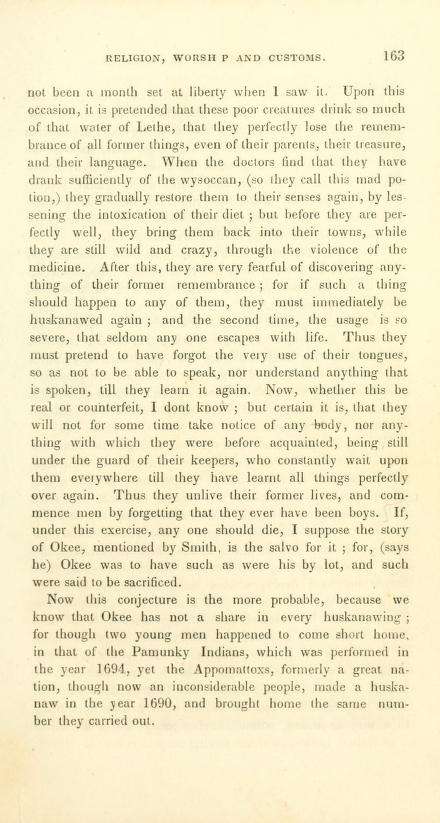 not been a month set at liberty when I saw it. Upon this occasion, it is pretended that these poor creatures drink so much of that water of Lethe, that they perfectly lose the remembrance of all former things, even of their parents, their treasure, and their language. When the doctors find that they have drank sufficiently of the wysoccan, (so they call this mad potion,) they gradually restore them to their senses again, by lessening the intoxication of their diet; but before they are perfectly well, they bring them back into their towns, while they are still wild and crazy, through the violence of the medicine. After this, they are very fearful of discovering anything of their former remembrance; for if such a thing should happen to any of them, they must immediately be huskanawed again; and the second time, the usage is so severe, that seldom any one escapes with life. Thus they must pretend to have forgot the very use of their tongues, so as not to be able to speak, nor understand anything that is spoken, till they learn it again. Now, whether this be real or counterfeit, I dont know; but certain it is, that they will not for some time take notice of any body, nor anything with which they were before acquainted, being still under the guard of their keepers, who constantly wait upon them everywhere till they have learnt all things perfectly over again. Thus they unlive their former lives, and commence men by forgetting that they ever have been boys. If, under this exercise, any one should die, I suppose the story of Okee, mentioned by Smith, is the salvo for it; for, (says he) Okee was to have such as were his by lot, and such were said to be sacrificed.

Now this conjecture is the more probable, because we know that Okee has not a share in every huskanawing; for though two young men happened to come short home, in that of the Pamunky Indians, which was performed in the year 1694, yet the Appomattoxs, formerly a great nation, though now an inconsiderable people, made a huskanaw in the year 1690, and brought home the same number they carried out. 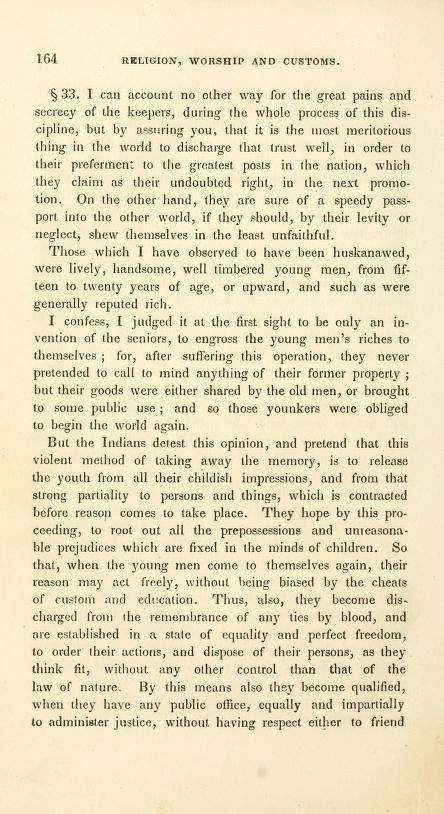 I can account no other way for the great pains and secrecy of the keepers, during the whole process of this discipline, but by assuring you, that it is the most meritorious thing in the world to discharge that trust well, in order to their preferment to the greatest posts in the nation, which they claim as their undoubted right, in the next promotion. On the other hand, they are sure of a speedy passport into the other world, if they should, by their levity or neglect, shew themselves in the least unfaithful.

Those which I have observed to have been huskanawed, were lively, handsome, well timbered young men, from fifteen to twenty years of age, or upward, and such as were generally reputed rich.

I confess, I judged it at the first sight to be only an invention of the seniors, to engross the young men’s riches to themselves; for, after suffering this operation, they never pretended to call to mind anything of their former property; but their goods were either shared by the old men, or brought to some public use; and so those younkers were obliged to begin the world again.

But the Indians detest this opinion, and pretend that this violent method of taking away the memory, is to release the youth from all their childish impressions, and from that strong partiality to persons and things, which is contracted before reason comes to take place. They hope by this proceeding, to root out all the prepossessions and unreasonable prejudices which are fixed in the minds of children. So that, when the young men come to themselves again, their reason may act freely, without being biased by the cheats of custom and education. Thus, also, they become discharged from the remembrance of any ties by blood, and are established in a state of equality and perfect freedom, to order their actions, and dispose of their persons, as they think fit, without any other control than that of the law of nature. By this means also they become qualified, when they have any public office, equally and impartially to administer justice, without having respect either to friend 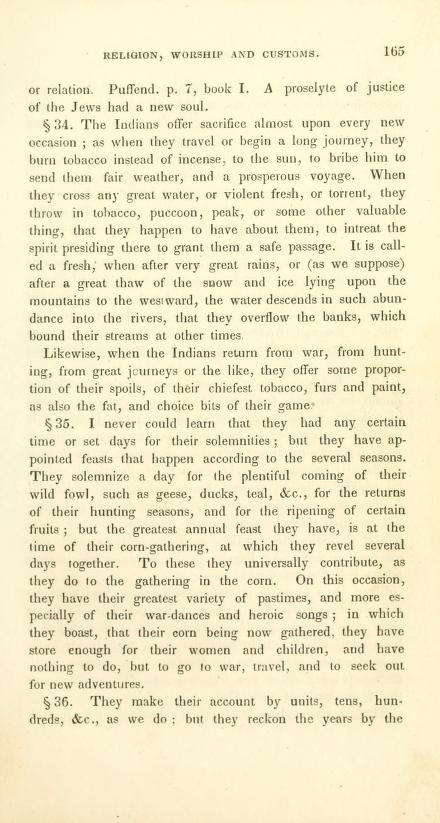 RELATED CONTENT
Categories:
Type:
MAP
TIMELINE
1722
Robert Beverley describes the male-initiation rite known among the Algonquian-speaking Indians of Tsenacomoco and Tidewater Virginia as the huskanaw in The History of Virginia.
CITE THIS ENTRY