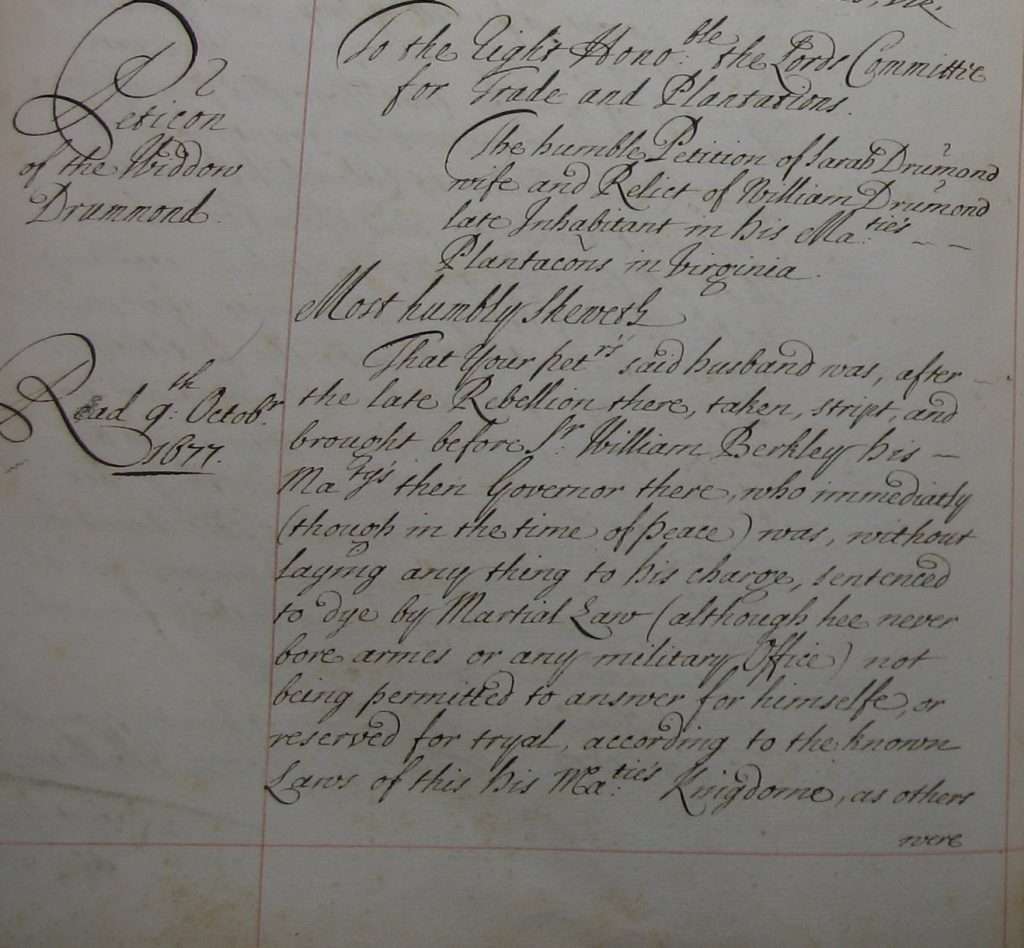 To the Right Hono:ble the Lords Committie for Trade and Plantations.

The humble Petition of Sarah Drummond wife and Relict of William Drummond late Inhabitant in his Ma:ties Plantacons in Virginia.

Peticion of the Widdow Drummond

That your petr’s said husband was, after the Late Rebellion there, taken, stript, and brought before S:r William Berkley his Maty’s then Governor there, who immediately (though in the time of peace) was, without laying any thing to his charge, sentenced to dye by Martial Law (although hee never bore armes or any military Office) not being permitted to answer for himselfe, or reserved for tryal, according to the known Laws of this his Ma:tie’s Kingdome, as others 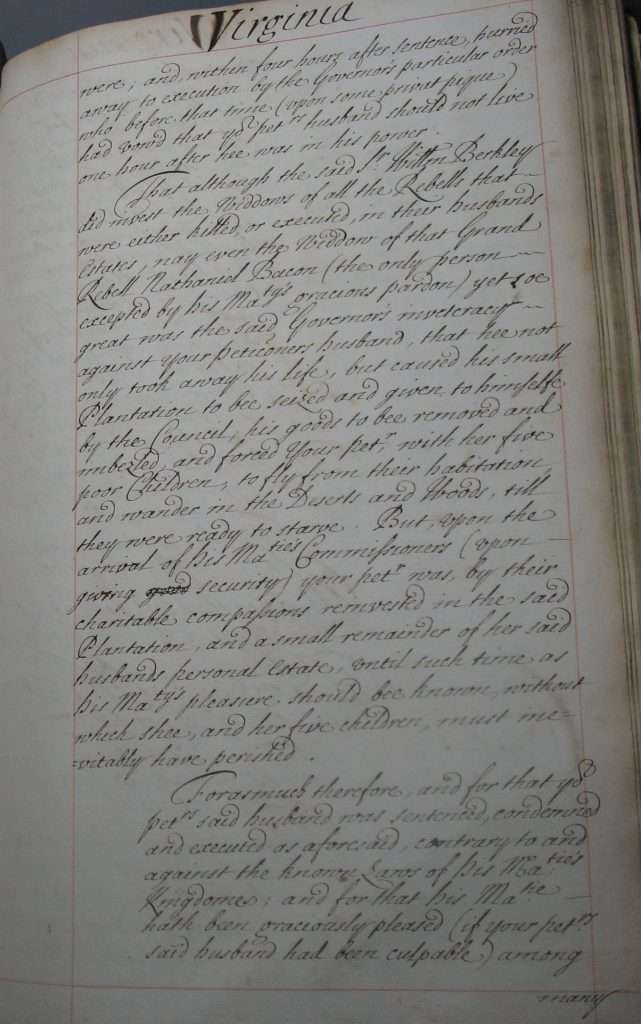 were; and, within four hours after sentence, hurried away to execution by the Governor’s particular order who before that time (upon some privat pique) had vow’d that yor petrs husband should not live one hour after hee was in his power.

That although the said S:r William Berkley did invest the Widdows of all the Rebells that were either killed, or executed, in their husbands Estates, nay even the Widdow of that Grand Rebell Nathaniel Bacon (the only person excepted by his Maty’s gracious pardon) yet soe great was the said Governor’s inveteracy against your peticioners husband, that hee not only took away his life, but caused his small Plantation to bee seized and given to himselfe by the Council; his goods to bee removed and imbezled, and forced Your petr, with her five poor Children, to fly from their habitation, and wander in the Deserts and Woods, till they were ready to starve. But upon the arrival of his Matie’s Commissioners (upon giving good security) your petr was, by their charitable compassions reinvested in the said Plantation, and a small remainder of her said husbands personal estate, until such time as his Maty’s pleasure should bee known, without which shee, and her five children, must inevitably have perished. 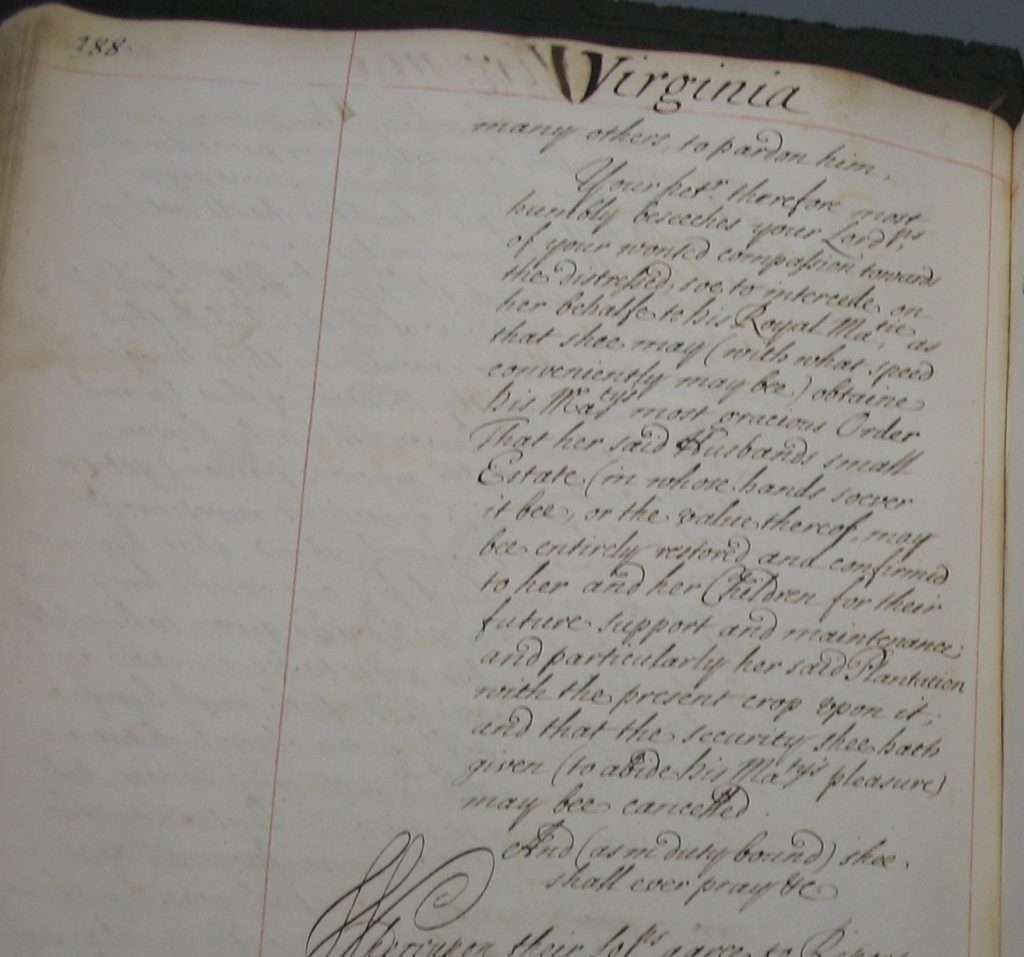 many others, to pardon him.

Your pet:r therefore most humbly beseeches your Lordps, of your wonted compassion towards the distressed, soe to intercede on her behalfe to his Royal Matie, as that shee may (with what speed conveniently may be) obtaine his Matys most gracious Order That her said Husbands small Estate (in whose hands soever it bee), or the value thereof, may bee entirely restored and confirmed to her and her Children for their future support and maintenance; and particularly her said Plantation with the present crop upon it, and that the security shee hath given (to abide his Maty’s pleasure) may bee cancelled.

And (as in duty bound) shee shall ever pray &c.

RELATED CONTENT
Categories:
Type:
MAP
TIMELINE
October 9, 1677
Sarah Drummond petitions the Board of Trade and Plantations in England for the restoration of the property of her late husband, the rebel William Drummond.
CITE THIS ENTRY