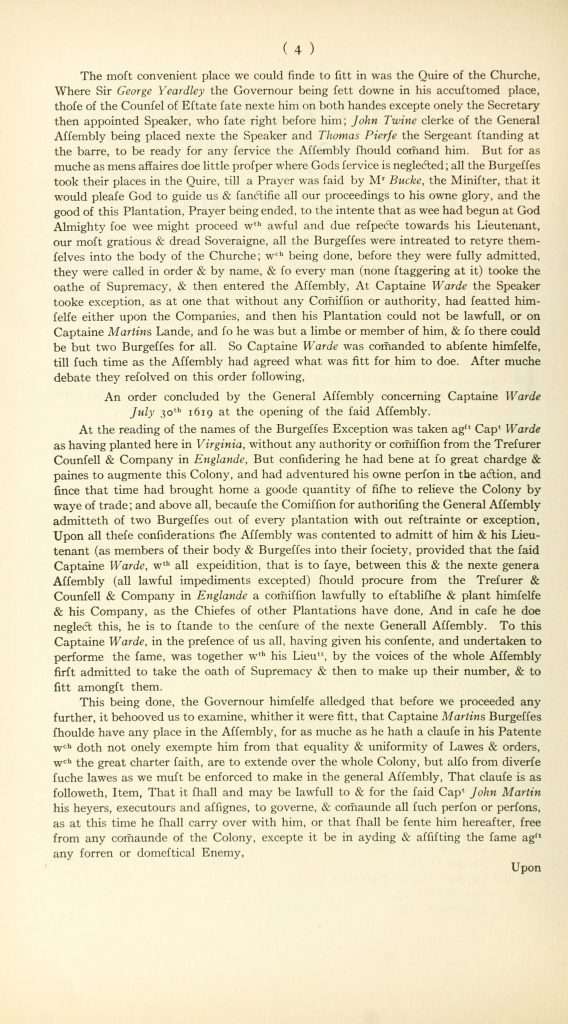 The most convenient place we could finde to sitt in was the Quire of the Churche, Where Sir George Yeardley the Governour being sett downe in his accustomed place, those of the Counsel of Estate sate next him on both handes excepte onely the Secretary then appointed Speaker, who sate right before him; John Twine clerke of the General Assembly being placed nexte the Speaker and Thomas Pierse the Sergeant standing at the barre, to be ready for any service the Assembly should command him. But for as muche as mens affaires doe little prosper where Gods service is neglected; all the Burgesses took their places in the Quire, till a Prayer was said by Mr Bucke, the Minister, that it would please God to guide us & sanctifie all our proceedings to his owne glory, and the good of his Plantation, Prayer being ended, to the intente that as wee had begun at God Almighty soe wee might proceed with awful and due respecte towards his Lieutenant, our most gratious & dread Soveraigne, all the Burgesses were intreated to retyre themselves into the body of the Churche; which being done, before they were fully admitted, they were called in order & by name, & so every man (none staggering at it) tooke the oathe of Supremacy, & then entered the Assembly, At Captaine Warde the Speaker tooke exception, as at one that without any commission or authority, had seated himselfe either upon the Companies, and then his Plantation could not be lawfull, or on Captaine Martins Lande, and so he was but a limbe or member of him, & so there could be but two Burgesses for all. So Captaine Warde was commanded to absente himselfe, till such time as the Assembly had agreed what was fit for him to doe. After much debate they resolved on this order following.

An order concluded by the General Assembly concerning Captaine Warde July 30th 1619 at the opening of the said Assembly.

At the reading of the names of the Burgesses Exception was taken against Captain Warde as having planted here in Virginia, without any authority or commission from the Tresurer Counsell & Company in Englande, But considering he had bene at so great chardge & paines to augmente this Colony, and had adventured his owne person in the action, and since that time had brought home a goode quantity of fishe to relieve the Colony by waye of trade; and above all, because the Comission for authorising the General Assembly admitteth of two Burgesses out of every plantation with out restraine or exception, Upon all these considerations the Assembly was contented to admit of him & his Lieutenant (as members of their body & Burgesses into their society, provided that the said Captaine Warde, with all expeidition, that is to saye, between this & the nexte genera Assembly (all lawful impediments excepted) should procure from the Tresurer & Counsell & Company in Englande a commission lawfully to establishe & plant himselfe & his Company, as the Chiefes of other Plantations have done, And in case he doe neglect this, he is to stande to the censure of the nexte Generall Assembly. To this Captaine Warde, in the presence of us all, having given his consente, and undertaken to performe the same, was together with his Lieutenant, by the voices of the whole Assembly first admitted to take the oath of Supremacy & then to make up their number, & to sitt amongst them.