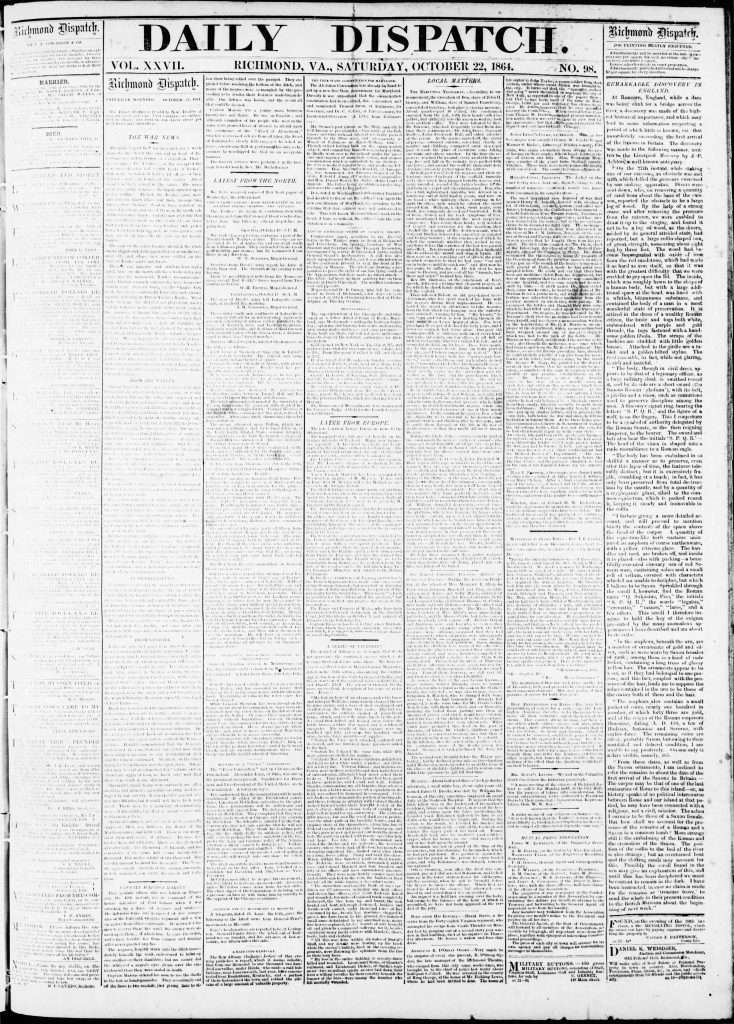 The Execution Yesterday.—According to announcement, the execution of Ben, slave of John H. Gentry, and William, slave of Samuel Fauntleroy, convicted of burglary, took place yesterday morning. About quarter-past 10 o'clock the condemned emerged from the jail, with their hands cuffed together, and springing into the wagon in waiting took scales on their coffins. They were followed by Rev. Dr. Burrows, (who had frequently visited them during their confinement,) Dr. John Dove,Sergeant Dudley, Jailer Frederick Hall, and other attachês of the prison. As the parties moved off, the crowd of persons collected outside, consisting chiefly of negroes and children, scampered away at a rapid pace towards the place of execution, some taking one route and others another. By the time the reporters reached the ground, every available housetop, tree and hill in the vicinity were packed with spectators, and around the scaffold thousands were standing curiously gazing upon the gallows.

At half-past 10 o'clock the negroes and their attendants arrived in front of the scaffold, immediately after which they jumped from the wagon, and, being uneuffed, ascended the ladder leading to the platform in a rapid and cheerful manner. Ben, who was a tall, well-formed mulatto, was dressed in a handsome suit of light woolen goods, and wore on one hand a white military clove, carrying in his right the other, with which he saluted the crowd around him. William, a short, stout negro, very black, was commonly dressed and barefooted. Both of them showed not the least symptoms of fear, and maintained throughout the most surprising composure. Uncovering their heads, as if in token of respect and reverence for the occasion, they awaited the reading of the death-warrant, which Sergeant Dudley delivered in somewhat an agitated and feeling manner; at the conclusion of which he asked the criminals whether they wished to say anything before the sentence of the law was carried into effect. Ben promptly responded that he should like to address the crowd and sing a hymn. He then went on in a rambling sort of speech, the point in which seemed to be that he had gone "on and on in badness until de cotch me," and that now he was going to suffer for it. He felt that he was going to Heaven, and pressed all his "friends, brothers and sisters" to meet him there.

Rev. Dr. Burrows, at the conclusion of Ben's speech, delivered a feeling and eloquent prayer, after which he shook hands with the condemned and left the scaffold.

Then followed Nelson, an old grey-haired negro clergyman, who has spent much of his time with the negroes during their imprisonment. He exhorted the crowd in attendance to take warning from the fate which was hanging over the unfortunate criminals standing by him. "My friends, "he said, "sin and Satan is now howling through disland more than I ever hearn of afore. I'se been preaching de gospel of de Lord dis forty years, and I neber see so much bad doins afore. Our poor old commonwealth is suffering with sin of every kind. Our jails, our courts, our law officers, is all full of wicked, bad people, who have violated de law; and it seems date de devil am let loose. Dese boys (pointing to the negroes beside him) am truly pent of dar sins, and I believe am going up to God." Nelson then shook hands with his "unfortunate brothers," as he called them, and particularly desired to be "remembered to Father Abraham in Heaven."

Following Nelson's exhortation, William made a short speech, expressing his satisfaction with the verdict of the jury and the punishment which was about being disposed upon him. He said he was not afraid to die; believed he was prepared, and hoped all his friends would meet him in heaven.

In an audible tone, Ben again desired all to unite in prayer, when himself and William instantly fell on their knees, and he delivered one of those peculiarly earnest, disconnected prayers which characterize moderately-intelligent negroes when engaged in devotional exercises at one of their meeting-houses. In the course of his prayer, Ben asked the Almighty to be merciful to his doomed companion's widow and children after he was gone, and to guide them throughout this life in the way of righteousness, so that they might all meet him in Heaven.

During the whole of these exercises on the part of the condemned, the negroes gathered around—who composed about four-fifths of all present—wept bitterly, and many of them shouted and ejaculated so violently that the officers several times were compelled to quiet them.

At five minutes to 11 o'clock, Jailor Frederick W. Hall adjusted the rope around the necks of the condemned, drew the caps over their eyes, descended the scaffold, and knocked away the props from under the platform upon which they were standing.—Owing to the stillness of the rope, the knot did not slip close to the necks of the criminals, consequently they died very hard, and near a half hour elapsed before life was entirely extinct. For about one or two minutes they hung perfectly motionless, but then their bodies commenced twitching and heaving, and they could be heard breathing for some distance off. William struggled desperately, several times swinging till he could throw his feet upon the top of the platform, which was hanging by hinges edgewise to the scaffold, upon a level almost with his head, by which means he would raise himself up in such a manner as to lessen the strain upon his neck. Several times he supported himself in this manner, and would remain in that position till the executioner would pluck his legs off, and then he would violently feel round and round till he could again strike the scaffold with his feet. Finally, however, his movements became weaker and weaker, and death put an end to his sufferings.

Dr. John Dove examined their pulses, and pronounced them dead precisely at half-past 11 o'clock, when their bodies were cut down, placed into coffins, and taken off for burial.