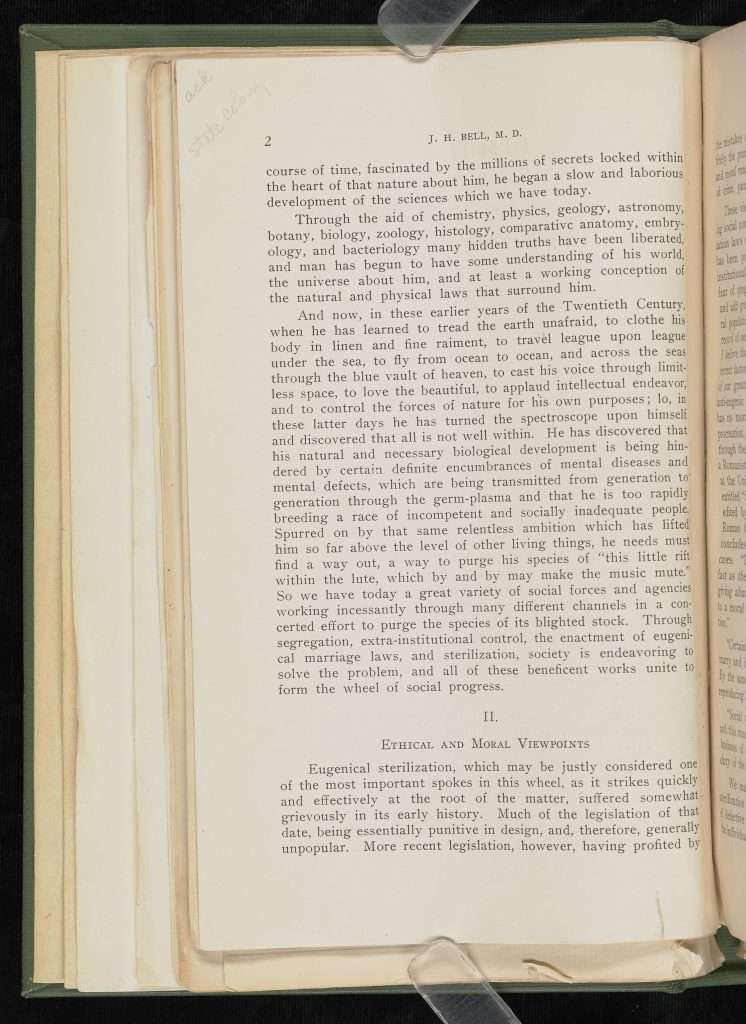 Eugenical sterilization, which may be justly considered one of the most important spokes in this wheel, as it strikes quickly and effectively at the root of the matter, suffered somewhat grievously in its early history. Much of the legislation of that date, being essentially punitive in design, and, therefore, generally unpopular. More recent legislation, however, having profited by 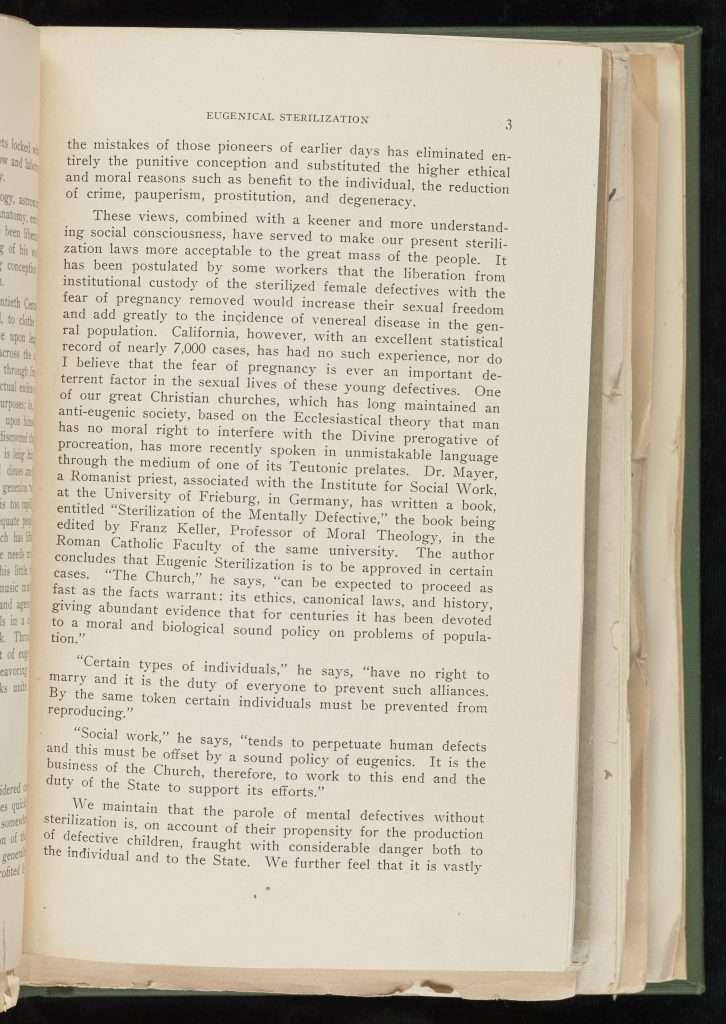 the mistakes of those pioneers of earlier days has eliminated entirely the punitive conception and substituted the higher ethical and moral reasons such as benefit to the individual, the reduction of crime, pauperism, prostitution, and degeneracy.

These views, combined with a keener and more understanding social consciousness, have served to make our present sterilization laws more acceptable to the great mass of the people. It has been postulated by some workers that the liberation from institutional custody of the sterilized female defectives with the fear of pregnancy removed would increase their sexual freedom and add greatly to the incidence of venereal disease in the general population. California, however, with an excellent statistical record of nearly 7,000 cases, has had no such experience, nor do I believe that the fear of pregnancy is ever an important deterrent factor in the sexual lives of these young defectives. One of our great Christian churches, which has long maintained an anti-eugrenic society, based on the Ecclesiastical theory that man has no moral right to interfere with the Divine prerogative of procreation, has more recently spoken in unmistakable language through the medium of one of its Teutonic prelates. Dr. Mayer, a Romanist priest, associated with the Institute for Social Work, at the University of Frieburg, in Germany, has written a book, entitled “Sterilization of the Mentally Defective,” the book being edited by Franz Keller, Professor of Moral Theology, in the Roman Catholic Faculty of the same university. The author concludes that Eugenic Sterilization is to be approved in certain cases. “The Church,” he says, “can be expected to proceed as fast as the facts warrant: its ethics, canonical laws, an history, giving abundant evidence that for centuries it has been devoted to a moral and biological sound policy on problems of population.”

“Certain types of individuals,” he says, “have no right to marry and it is the duty of everyone to prevent such alliances. By the same token certain individuals must be prevented from reproducing.”

“Social work,” he says, “tends to perpetuate human defects and this must be offset by a sound policy of eugenics. It is the business of the Church, therefore, to work to this end and the duty of the State to support its efforts.”

We maintain that the parole of mental defectives without sterilization is, on account of their propensity for the production of defecive children, fraught with considerable danger both to the individual and to the State. We further feel that it is vastly 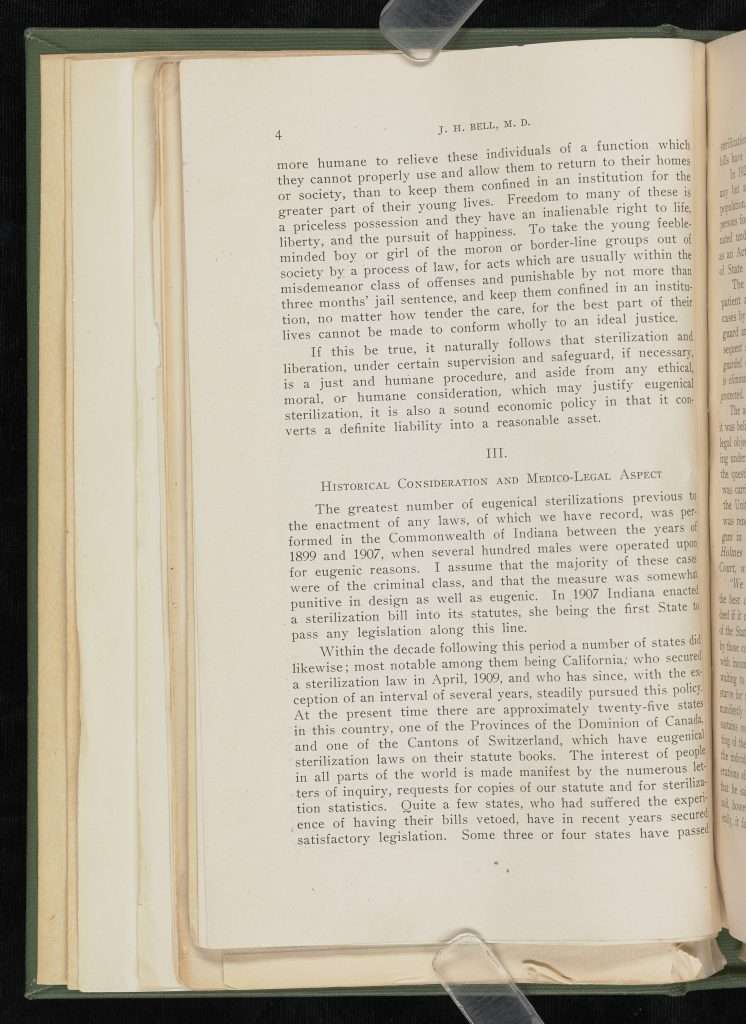 more humane to relieve these individuals of a function which they cannot properly use and allow them to return to their homes or society, than to keep them confined in an institution for the greater part of their young lives. Freedom to many of these is a priceless possession and they have an inalienable right to life, liberty, and the pursuit of happiness. To take the young feebleminded boy or girl of the moron or border-line groups out of society by a process of law, for acts which are usually within the misdemeanor class of offenses and punishable by not more than three months’ jail sentence, and keep confined in an institution, no matter how tender the care, for the best part of their lives cannot be made to conform wholly to an ideal justice.

If this be true, it naturally follows that sterilization and liberation, under certain supervision and safeguard, if necessary, is a just and humane procedure, and aside from any ethical, moral, or humane consideration, which may justify eugenical sterilization, it is also a sound economic policy in that it converts a definite liability into a reasonable asset.

Justifying Eugenics: Excerpts from John Hendren Bell’s The Biological Relationship of Eugenics to the Development of the Human Race (1930)

Report on Sterilization: an Excerpt from John Hendren Bell’s Eugenic Control and its Relationship to the Science of Life and Reproduction (1931)

RELATED CONTENT
Categories:
Type:
MAP
TIMELINE
1929
In the pamphlet Eugenical Sterilization, John H. Bell argues for the ethics of sterilization based on the "science" of eugenics.
CITE THIS ENTRY