Skip to content
Author: George PercyTranscription Source: George Percy, “Observations gathered out of a Discourse of the Plantation of the Southerne Colonie in Virginia,” in Hakluytus Posthumus, or Purchas His Pilgrimes, compiled by Samuel Purchas (London: H. Fetherston, 1625) 4:1689-1690.
FULL TEXT 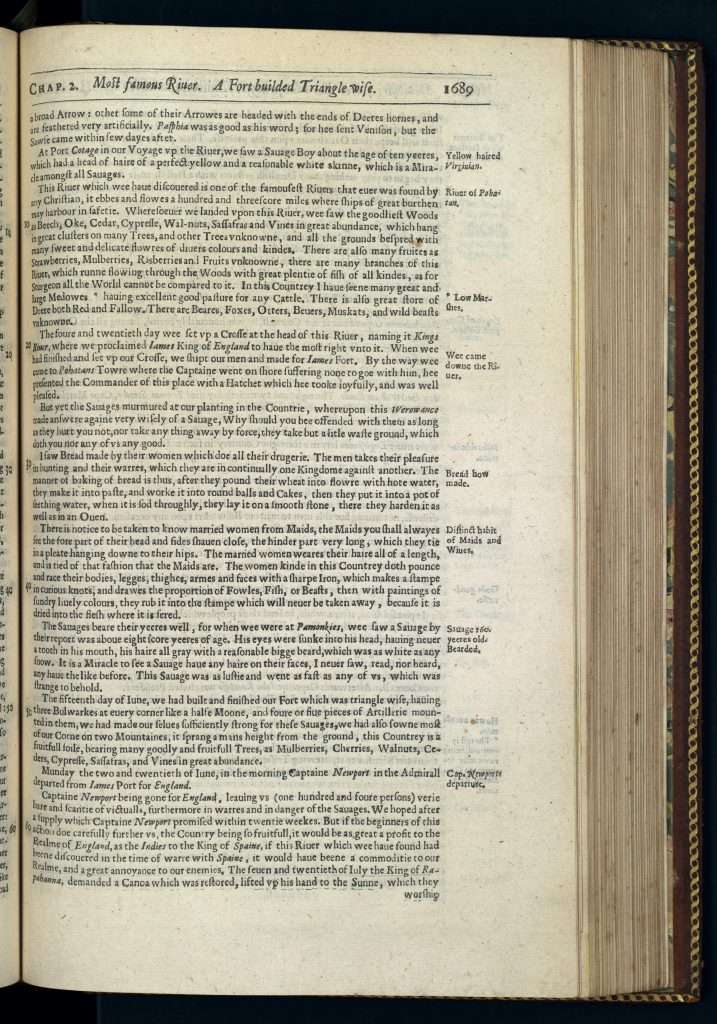 The Dying Time; an excerpt from “Observations gathered out of a Discourse of the Plantation of the Southerne Colonie in Virginia” by George Percy (1625), Page 1689

The fifteenth day of June, we had built and finished our Fort which was triangle wise, having three Bulwarkes at every corner like a halfe Moone, and foure of five pieces of Artillerie mounted in them, we had made our selves sufficiently strong for these Savages, we had also sowne most of our Corne on two Mountaines, it sprang a mans height from the ground, this Countrey is a fruitfull soile, bearing many goodly and fruitfull Trees, as Mulberries, Cherries, Walnuts, Ceders, Cypresse, Sassafras, and Vines in great abundance.

Munday the two and twentieth of June, in the morning Captaine Newport in the Admirall departed from James Port for England.

Captaine Newport being gone for England, leaving us (one hundred and foure persons) verie bare and scantie of victualls, furthermore in warres and in danger of the Savages. We hoped after a supply which Captaine Newport promised within twentie weekes. But if the beginners of this action doe carefully further us, the Country being so fruitfull, it would be as great a profit to the Realme of England, as the Indies to the King of Spaine, if this River which wee have found had beene discovered in the time of warre with Spaine, it would have been a commoditie to our Realme, and a great annoyance to our enemies. The seven and twentieth of July the King of Rapahanna, demanded a Canoa which was restored, lifted up his hand to the Sunne, which they 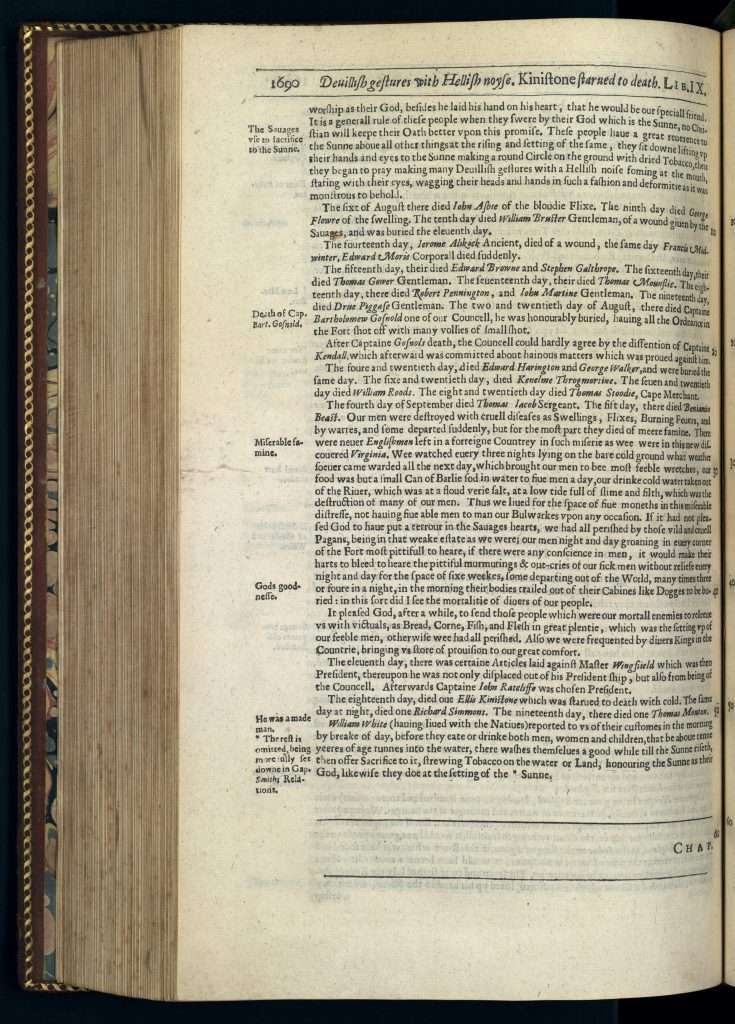 The Dying Time; an excerpt from “Observations gathered out of a Discourse of the Plantation of the Southerne Colonie in Virginia” by George Percy (1625), Page 1690

worship as their God, besides he laid his hand on his heart, that he would be our speciall friend. It is a generall rule of these people when they swere by their God which is the Sunne, no Christian will keepe their Oath better upon this promise. These people have a great reverence to the Sunne above all other things at the rising and setting of the same, they sit downe lifting up their hands and eyes to the Sunne making a round Circle on the ground with dried Tobacco, then they began to pray making many Devillish gestures with a Hellish noise foming at the mouth, staring with their eyes, wagging their heads and hands in such a fashion and deformitie as it was monstrous to behold.

The sixt of August there died John Asbie of the bloudie Flixe. The ninth day died George Flowre of the swelling. The tenth day died William Bruster Gentleman, of a wound given by the Savages, and was buried the eleventh day.

After Captaine Gosnols death, the Councell could hardly agree by the dissention of Captaine Kendall, which afterward was committed about hainous matters which was proved against him.

The fourth day of September died Thomas Jacob Sergeant. The fift day, there died Benjamin Beast. Our men were destroyed with cruell diseases as Swellings, Flixes, Burning Fevers, and by warres, and some departed suddenly, but for the most part they died of meere famine. There were never Englishmen left in a forreigne Countrey in such miserie as wee were in this new discovered Virginia. Wee watched every three nights lying on the bare cold ground what weather soever came warded all the next day, which brought our men tto bee most feeble wretches, food was but a small Can of Barlie sod in water to five men a day, our drinke cold water taken out of the River, which was at a floud verie salt, at a low tide full of slime and filth, which was the destruction of many of our men. Thus we lived for the space of five moneths in this miserable distresse, not having five able men to man our Bulwarkes upon any occasion. If it had not pleased God to have put a terrour in the Savages hearts, we had all perished by these vild and cruell Pagans, being in that weake estate as we were; our men night and day groaning in ever corner of the Fort most pittifull to heare, if there were any conscience in men, it would make their harts to bleed to heare the pittiful murmurings & out-cries of our sick men without reliefe every night and day for the space of sixe weekes, some departing out of the World, many times three or foure in a night, in the morning their bodies trailed out of their Cabines like Dogges to be buried: in this sort I did see the mortalitie of divers of our people.

It pleased God, after a while, to send those people which were our mortall enemies to releeve us with victuals, as Bread, Corne, Fish, and Flesh in great plentie, which was the setting up of our feeble men, otherwise wee had all perished. Also we were frequented by divers Kings in the Countrie, bringing us store of provision to our great comfort.

The eleventh day, there was certaine Articles laid against Master Wingfield which was then President, thereupon he was not only displaced out of his President ship, but also from being of the Councell. Afterwards Captaine John Ratcliffe was chosen President.

The eighteenth day, died one Ellis Kinistone which was starved to death with cold. The same day at night, died one Richard Simmons. The nineteenth day, there died one Thomas Mouton.

William White (having lived with the Natives) reported to us of their customes in the morning by breake of day, before they eate or drinke both men, women and children, that be above tenne yeeres of age runnes into the water, there washes themselves a good while till the Sunne riseth, then offer Sacrifice to it, strewing Tobacco on the water or Land, honouring the Sunne as their God, likewise they doe at the setting of the Sunne [The rest is omitted, being more fully set downe in Cap. Smiths Relations]

RELATED CONTENT
Categories:
Type:
MAP
TIMELINE
1625
George Percy's account of the early Jamestown settlement, "Observations Gathered Out of a Discourse of the Plantation of the Southerne Colonie in Virginia by the English," is published by Samuel Purchas in Hakluytus Posthumus, or Purchas His Pilgrimes.
FURTHER READING