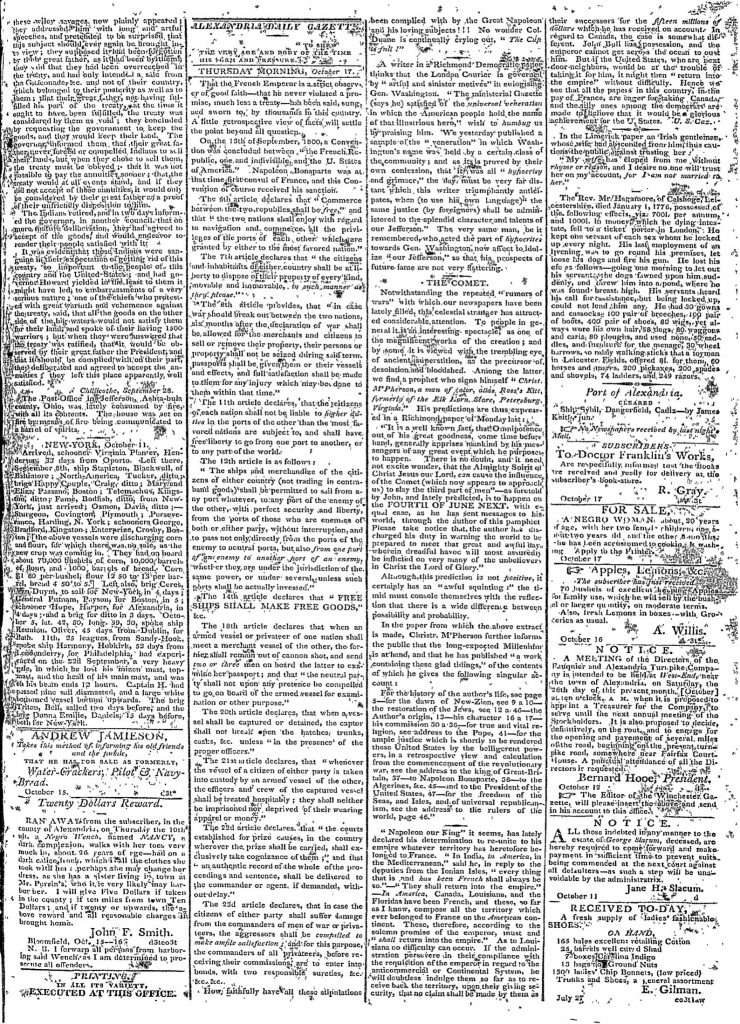 Notwithstanding the repeated “rumor of wars” with which our newspapers have been lately filled this celestial stranger has attracted considerable attention. To people in general it is an interesting spectacle; as one of the magnificent works of the creation; and by some it is viewed with the trembling eye of ancient superstition, as the precursor of desolation and bloodshed. Among the latter we find a prophet who signs himself “Chris. M c Pherson, a man of color, alias Ross’s Kitt, formerly of the Elk Horn Store, Petersburg, Virginia.” His predictions are thus expressed in a Richmond paper of Monday last:

“It is a well known fact, that Omnipotence out of his great goodness, some time beforehand, generally apprises mankind by his messengers of any great event which he purposes to happen. There is no doubt, and it need to excite wonder, that the Almighty Spirit of Christ Jesus our Lord, can cause the influence of the Comet (which now appears to approach us) to slay the third part of men”—as foretold by John, and lately predicted, is to happen on the FOURTH OF JUNE NEXT. with equal ease, as he has sent messages to his world, through the author of this pamphlet Please take notice that, the author has discharged his duty in warning the world to be prepared to meet that great and awful day wherein dreadful havoc will most assuredly be inflicted on very many of the unbelievers in Christ the Lord of Glory.”

Although this prediction is not positive, it certain has an “awful squinting:” the timid must console themselves with the reflection that there is a wide difference between possibility and probability.

In the paper from which the above extract is made, Christr. McPherson further informs the public that the long-expected Millenium is at hand, and that he has published “a work containing these glad tididings,” of the contents of which he gives the following singular account:

[“]For the history of the author’s life, see page 5—for the dawn of New-Zion, see 9 a 10—the restoration of the Jews, see 12 a 46—the Author’s origin, 13—his character 16 a 17—his commission 30 a 36—for true and vital religion, see address to the Pope, 41—for the ample justice which is shortly to be rendered these United States by the belligerent powers, in a retrospective view and calculation from the commencement of the revolutionary war, see the address to the king of Great-Britain, 37—to Napoleon Bonaparte, 38—to the Algerines, &c. 45—and to the President of the United States, 47—for the freedom of the Seas, and Isles, and of universal republicanism, see the address to the rulers of the world, page 46.”