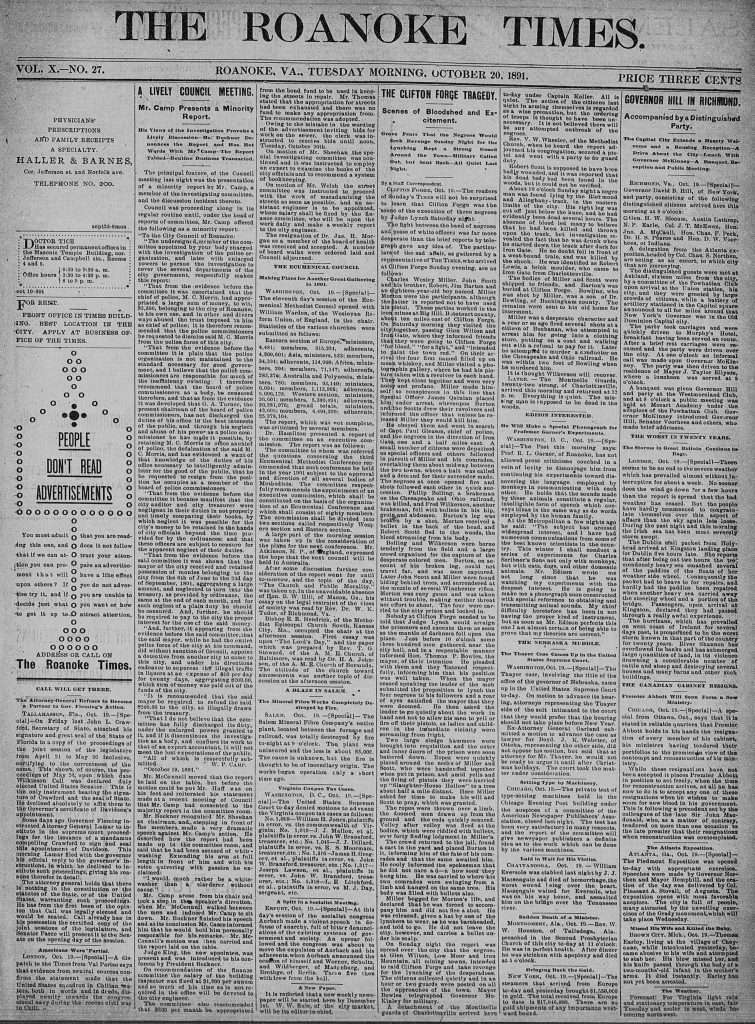 Scenes of Bloodshed and Excitement.

Grave Fears That the Negroes Would Seek Revenge Sunday Night for the Lynching Kept a Strong Guard Around the Town—Military Called Out, but Sent Back—All Quiet Last Night.

By a Staff Correspondent.

Clifton Forge, Oct. 19.—The readers of Sunday's Times will not be surprised to learn that Clifton Forge was the scene of the execution of three negroes by Judge Lynch Saturday night.

The fight between the band of negroes and posse of white officers was far more desperate than the brief reports by telegraph gave any idea of. The particulars of the sad affair, as gathered by a representative of The Times, who arrived at Clifton Forge Sunday evening, are as follows:

Charles Wesley Miller, John Scott and his brother, Robert, Jim Barton and an eighteen-year-old boy named Miller Morton were the participants, although the latter is reported not to have used his pistol. These parties worked in the iron mines at Big Hill, Botetourt county, about ten miles east of Clifton Forge. On Saturday morning they visited the city together, passing Glen Wilton and Iron Gate, where they informed friends that they were going to Clifton Forge "for blood," "for a fight," and "intended to paint the town red." On their arrival the four first named filled up on mean whiskey, and Miller visited a photographic gallery, where he had his picture taken with a revolver in each hand. They kept close together and were very noisy and profane. Miller made himself so conspicuous in this line that Special Officer James Quinlan placed him under arrest, whereupon Burton and the Scotts drew their revolvers and informed the officer that unless he released Miller they would kill him.

He obeyed them and went in search of Capt. Paul Gleason, chief of police, and the negroes in the direction of Iron Gate, one and a half miles east. A small number of citizens were deputized as special officers and others followed in pursuit of Miller and his comrades, overtaking them about midway between the two towns, where a halt was called a demand for their surrender made. The negroes at once opened fire and shots followed each other in quick succession. Philip Bolling, a brakeman on the Chesapeake and Ohio railroad, was killed, and Fred Wilkerson, another brakeman, fell with bullets in his hip, groin and abdomen. Burton's leg was broken by a shot, Morton received a bullet in the back of the head, and Robert Scott fled to the woods, the blood streaming from his body.

Bolling and Wilkerson were borne tenderly from the field and a large crowd organized for the capture of the desperate colored men. Burton, on account of his broken leg, could not travel far, and was soon captured. Later John Scott and Miller were found hiding behind trees, and surrendered at the muzzle of several Winchester rifles. Morton was easy game and was taken without trouble, making neither threat nor effort to shoot. The four were carried to the city prison and locked in.

Nobody at Clifton Forge needed to be told that Judge Lynch would arraign the prisoners and execute them as soon as the mantle of darkness fell upon the place. Just before 10 o'clock some three hundred men gathered near the city hall, and in a respectable manner informed Hon. Thomas P. Bowles, the mayor, of their intention. He pleaded with them and they listened respectfully, informing him that his position was well taken. When the mayor ceased speaking the leader of the mob submitted the proposition to lynch the four negroes to his followers and a roar of ayes satisfied the mayor that they were doomed. He then asked the leader to go quietly about the work in hand and not to allow his men to yell or fire off their pistols, as ladies and children in the immediate vicinity were screaming from fright.

Two large sledge hammers were brought into requisition and the outer and inner doors of the prison were soon battered down. Ropes were quickly placed around the necks of Miller and Scott, who were handcuffed together when put in prison, and amid yells and the firing of pistols they were hurried up "Slaughter-House Hollow" to a tree about half a mile distant. Here Miller asked for time to make his will and Scott to pray, which was granted.

The ropes were thrown over a limb, the doomed men drawn up from the ground and the ends quickly secured. Volley after volley was fired at the bodies, which were riddled with bullets, over forty finding lodgment in Miller's.

The crowd returned to the jail, found a cart in the yard and placed Burton in it, informing him of the fate of his comrades and that the same awaited him. He cooly informed the spokesman that he did not care a d—n how soon they hung him. He was carried to where his two comrades were swinging from a limb and hanged on the same tree. His body was filled with bullets also.

Miller begged for Morton's life, and declared that he was forced to accompany him and did not fire a shot. He was released, given a hat by one of the lynchers to wear, as he was bareheaded, and told to go. He did not leave the city, however, and carries a bullet under his scalp.

On Sunday night the report was spread over the city that the negroes at Glen Wilton, Low Moore and Iron Mountain, all mining towns, intended to raid Clifton Forge and take revenge for the lynching of the desperadoes. The citizens collected quietly and in an hour or two guards were posted on all the approaches of the town. Mayor Bowles telegraphed Governor McKinley Philip W. McKinney for military.

A detachment of the Monticello guards of Charlottesville arrived here to-day under Captain Keller. All is quiet. The action of the citizens last night in arming themselves is regarded as a wise precaution, but the ordering of troops is thought to have been unnecessary. It is not believed there will be any attempted outbreak of the negroes.

Rev. V. W. Wheeler, of the Methodist Church, when he heard the report adjourned his congregation, secured a pistol and went with a party to do guard duty.

Robert Scott is supposed to have been badly wounded, and it was reported that his dead body had been found in the woods, but it could not be verified.

About 10 o'clock Sunday night a negro man was found lying by the Richmond and Alleghany track, in the eastern limits of the city. His right leg was cut off just below the knee, and he had evidently been dead several hours. The absence of blood led many to believe that he had been killed and thrown upon the track, but investigation revealed that he was drunk when he started down the track after dark for Iron Gate. He no doubt fell in front of a west-bound train, and was killed by the shock. He was identified as Robert Lewis, a brick moulder, who came to Iron Gate from Charlottesville.

The bodies of Miller and Scott were shipped to friends, and Barton's was buried at Clifton Forge. Bowling, who was shot by Miller, was a son of Dr. Bowling, of Buckingham county. The remains were sent to his old home for interment.

Miller was a desperate character and a year or so ago fired several shots at a citizen of Buchanan, who attempted to arrest him for going into a clothing store, putting on a coat and walking out with a refusal to pay for it. Later he attempted to murder a conductor on the Chesapeake and Ohio railroad. He was within two feet of Bowling when he murdered him.

It is thought Wilkerson will recover.

Later.—The Monticello Guards, twenty-two strong, of Charlottesville, arrived this morning and returned at 12 p. m. Everything is quiet. The missing man is supposed to be dead in the woods.