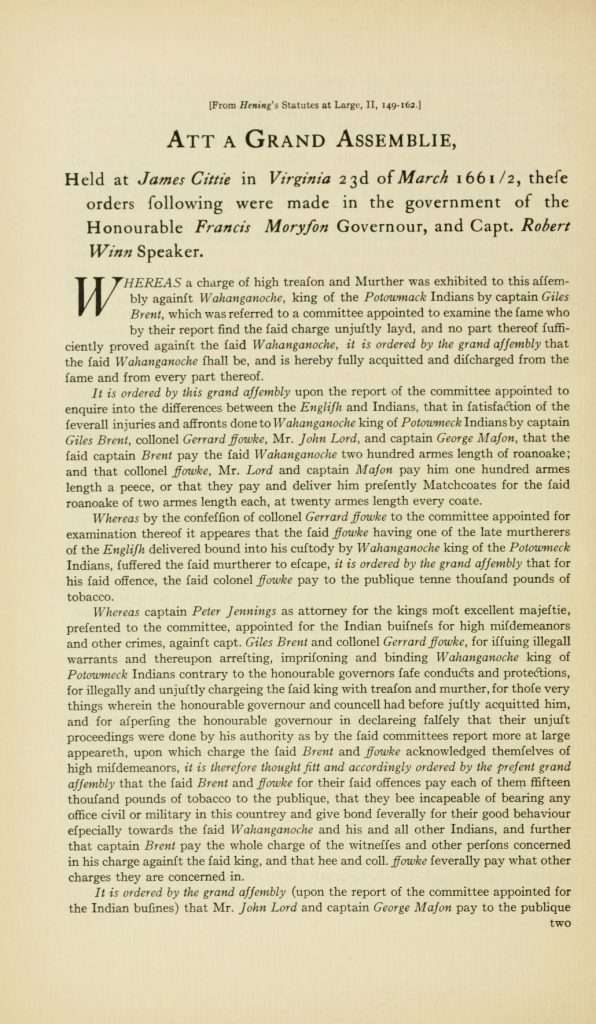 Journals of the House of Burgesses of Virginia, Page 14

WHEREAS a charge of high treason and Murther was exhibited to this assembly against Wahanganoche, king of the Potowmack Indians by captain Giles Brent, which was referred to a committee appointed to examine the same who by their report find the said charge unjustly layd, and no part thereof sufficiently proved against the said Wahanganoche, it is ordered by the grand assembly that the said Wahanganoche shall be, and is hereby fully acquitted and discharged from the same and from every part thereof.

It is ordered by this grand assembly upon the report of the committee appointed to enquire into the differences between the English and Indians, that in satisfaction of the severall injuries and affronts done to Waganganoche king of Potowmeck Indians by captain Giles Brent, collonel Gerrard ffowke, Mr. John Lord, and captain George Mason, that the said captain Brent pay the said Wahanganoche two hundred armes length of roanoake; and that collonel ffowke, Mr. Lord and captain Mason pay him one hundred armes length a peece, or that they pay and deliver him presently Matchcoates for the said roanoake of two armes length each, at twenty armes length every coate.

Whereas by the confession of collonel Gerrard ffowke to the committee appointed for examination thereof it appeares that the said ffowke having of the late murtherers of the English delivered bound into his custody by Wahanganoche king of the Potowmeck Indians, suffered the said murtherer to escape, it is ordered by the grand assembly that for his said offence, the said colonel ffowke pay to the publique tenne thousand pounds of tobacco.

Whereas captain Peter Jennings as attorney for the kings most excellent majestie, presented to the committee, appointed for the Indian buisness for high misdemeanors and other crimes, against capt. Giles Brent and collonel Gerrard ffowke, for issuing illegall warrants and thereupon arresting, imprisoning and binding Wahanganoche king of Potowmeck Indians contrary to the honourable governors safe conducts and protections, for illegally and unjustly chargeing the said king with treason and murther, for those very things wherein the honourable governour and councell had before justly acquitted him, and for aspersing the honourable governour in declareing falsely that their unjust proceedings were done by his authority as by the said committees report more at large appeareth, upon which charge the said Brent and ffowke acknowledged themselves of high misdemeanors, it is therefore thought fitt and accordingly ordered by the present grand assembly that the said Brent and ffowke for their said offences pay each of them fifteen thousand pounds of tobacco to the publique, that they bee incapeable of bearing any office civil or millitary in this countrey and give bond severally for their good behaviour especially towards the said Wahanganoche and his and all other Indians, and further that captain Brent pay the whole charge of the witnesses and other persons concerned in his charge against the said king, and that hee and coll. ffowke severally pay what other charges they are concerned in.

It is ordered by the grand assembly (upon the report of the committee appointed for the Indian business) that Mr. John Lord and captain George Mason pay to the publique 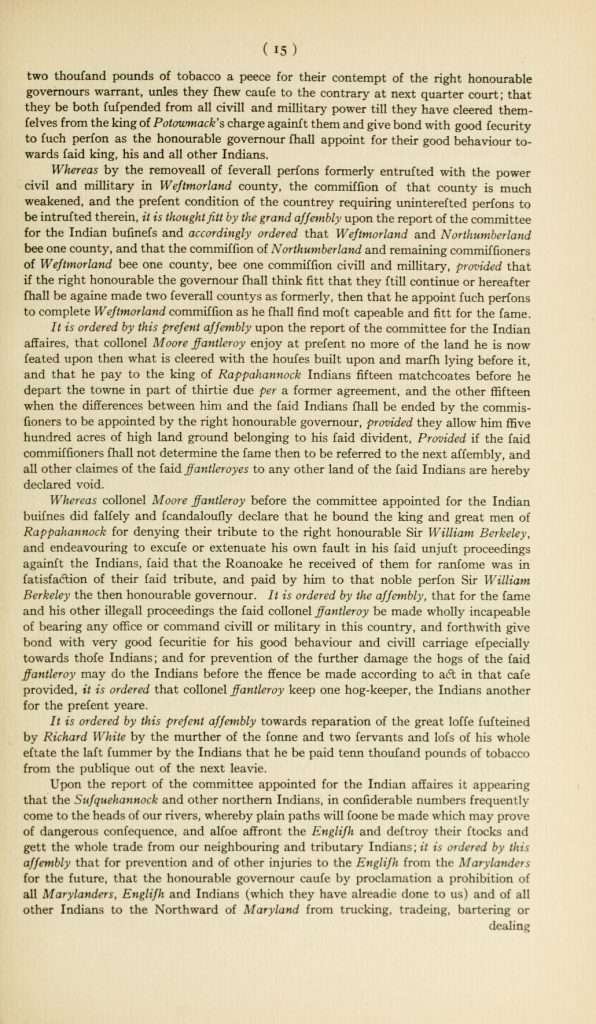 Journals of the House of Burgesses of Virginia, Page 15

two thousand pounds of tobacco a peece for their contempt of the right honourable governours warrant, unles they shew cause to the contrary at next quarter court; that they be both suspended from all civill and millitary power till they have cleered themselves from the king of Potowmack‘s charge against them and give bond with good security to such person as the honourable governour shall appoint for their good behaviour towards said king, and all other Indians.

Whereas by the removeall of severall persons formerly entrusted with the power civil and millitary in Westmorland county, the commission of that county is much weakened, and the present condition of the countrey requiring uninterested persons to be intrusted therein, it is thought fit by the grand assembly upon the report of the committee for the Indian business and accordingly ordered that Westmorland and Northumberland bee one county, and that the commission of Northumberland and remaining commissioners of Westmorland bee one county, bee one commission civill and millitary, provided that if the right honourable the governour shall think fitt that they still continue or hereafter shall be againe made two severall countys as formerly, then that he appoint such persons to complete Westmorland commission as he shall find most capeable and fit for the same.

RELATED CONTENT
Categories:
Type:
MAP
TIMELINE
March 23, 1662
The House of Burgesses determines that the Patawomeck chief Wahanganoche has been unjustly framed for murder and penalizes the perpetrators, all planters in Westmoreland County. The burgesses also combine Westmoreland and Northumberland counties.
FURTHER READING