Princess Ann sessions. At a Court held the 3d of January 1706. 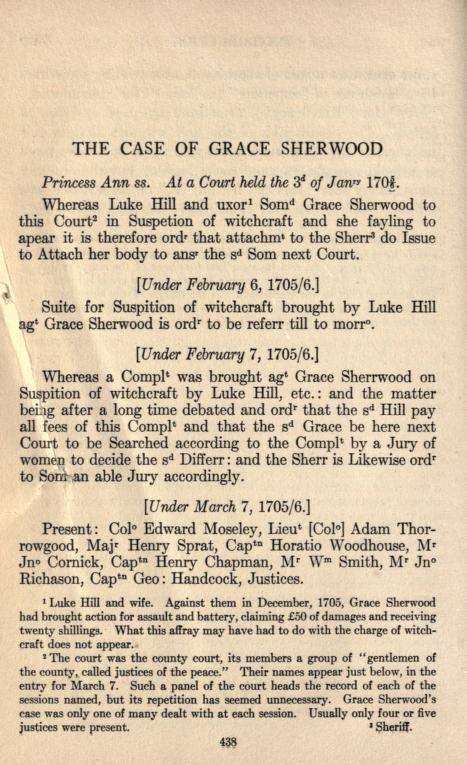 Whereas Luke Hill and uxor [wife] Summoned Grace Sherwood to this Court in Suspetion of witchcraft and she fayling to appear, it is therefore ordered that attachment to the Sheriff do Issue to Attach her body to answer the said Summons next court.

Suite for Suspition of witchcraft brought by Luke Hill against Grace Sherwood is ordered to referr till to morrow.

Whereas a Complaint was brought against Grace Sherrwood on Suspition of witchcraft by Luke Hill, etc.: and the matter being after a long time debated and ordered that the said Hill pay all fees of this Complaint and that the said Grace be here next Court to be Searched according to the Complaint by a Jury of women to decide the said Difference: and the Sheriff is Likewise ordered to Summon an able Jury accordingly. 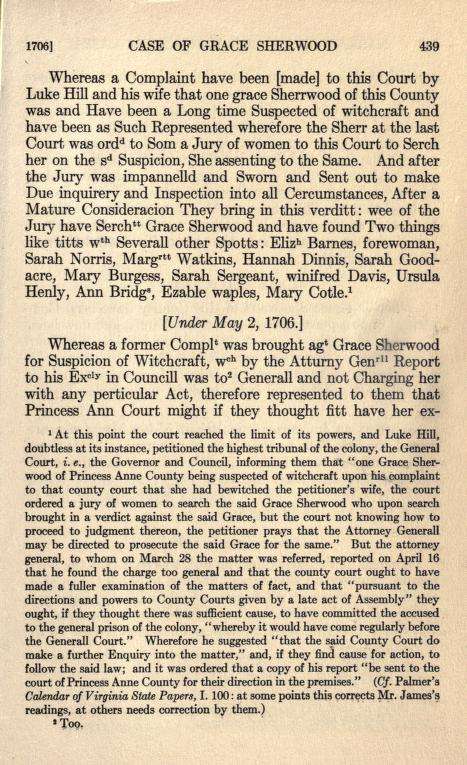 Whereas a Complaint have been [made] to this Court by Luke Hill and his wife that one grace Sherrwood of this County was and Have been a Long time Suspected of witchcraft and have been as Such Represented wherefore the Sheriff at the last Court was ordered to Summon a Jury of women to this Court to Serch her on the said Suspicion, She assenting to the Same. And after the Jury was impannelld and Sworn and Sent out to make Due inquirery and Inspection into all Cercumstances, After a Mature Consideracion They bring in this verditt: wee of the Jury have Serchtt Grace Sherwood and have found Two things like titts with Severall other Spotts: Elizabeth Barnes, forewoman, Sarah Norris, Margarett Watkins, Hannah Dinnis, Sarah Goodacre, Mary Burgess, Sarah Sergeant, winifred Davis, Ursula Henly, Ann Bridges, Ezable waples, Mary Cotle.

[At this point the court reached the limit of its powers, and Luke Hill, doubtless at its instance, petitioned the highest tribunal of the colony, the General Court, i.e., the Governor and Council, informing them that “one Grace Sherwood of Princess Anne County being suspected of witchcraft upon his complaint to that county court that she had bewitched the petitioner’s wife, the court ordered a jury of women to search the said Grace Sherwood who upon search brought in a verdict against the said Grace, but the court not knowing how to proceed to judgment thereon, the petitioner prays that the Attorney Generall may be directed to prosecute the said Grace for the same.” But the attorney general, to whom on March 28 the matter was referred, reported on April 16 that he found the charge too general and that the county court ought to have made a fuller examination of the matters of fact, and that “pursuant to the directions and powers to County Courts given by a late act of Assembly” they ought, if they thought there was sufficient cause, to have committed the accused to the general prison of the colony, “whereby it would have come regularly before the Generall Court.” Wherefore he suggested “that the said County Court do make a further Enquiry into the matter,” and if they find cause for action, to follow the said law; and it was ordered that a copy of his report “be sent to the court of Princess Anne County for their direction in the premises.”]

Whereas a former Complaint was brought against Grace Sherwood for Suspicion of Witchcraft, which by the Atturney Generall Report to his Excellency in Councill was too Generall and not Charging her with any perticular Act, therefore represented to them that Princess Ann Court might if they thought fitt have her examined De Novo, and the Court Being of Oppinion that there is great Cause of Suspicion Doe therefore order that the Sheriff take the Said Grace into his Safe Costody untill She Shall give bond and Security for her Appearance to the next Court to be examin- 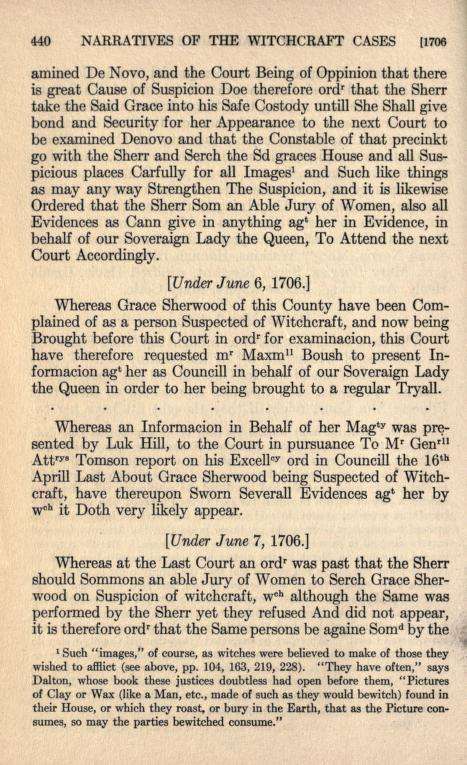 ed Denovo and that the Constable of that precinkt go with the Sheriff and Serch the Said graces House and all Suspicious places Carfully for all Images and Such like things as may any way Strengthen The Suspicion, and it is likewise Ordered that the Sheriff Summon an Able Jury of Women, also all Evidences as Cann give in anything against her in Evidence, in behalf of our Soveraign Lady the Queen, To Attend the next Court Accordingly.

Whereas Grace Sherwood of this County have been Complained of as a person Suspected of Witchcraft, and now being Brought before this Court in order for examinacion, this Court have therefore requested mr Maximillian Boush to present Inforamacion against her as Councill in behalf of our Soveraign Lady the Queen in order to her being brought to a regular Tryall.

Whereas an Informacion in Behalf of her Magesty was presented by Luk Hill, to the Court in pursuance To Mr Generall Attorneys Thomson report on his Excellency order in Councill the 16th Aprill Last About Grace Sherwood being Suspected of Witchcraft, have thereupon Sworn Severall Evidences against her by which it Doth very likely appear.

Whereas at the Last Court an order was past that the Sheriff should Sommons an able Jury of Women to Serch Grace Sherwood on Suspicion of witchcraft, which although the Same was performed by the Sheriff yet they refused And did not appear, it is therefore ordered that the Same persons be againe Sommoned by the 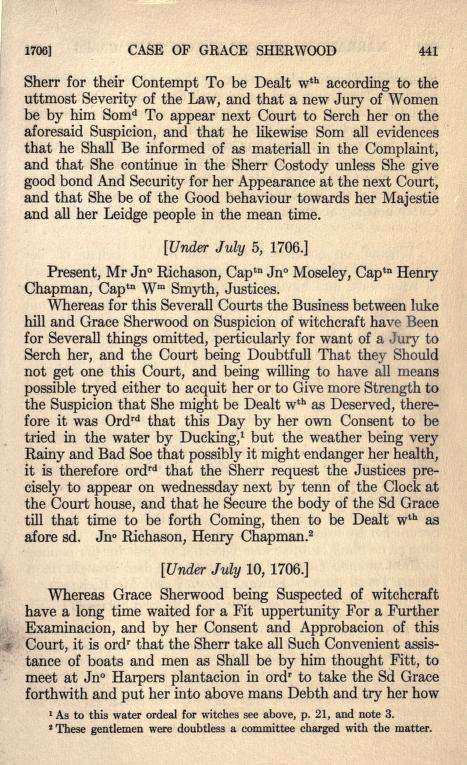 Sheriff for their Contempt To be Dealt with according to the uttmost Severity of the Law, and that a new Jury of Women be by him Sommoned To appear next Court to Serch her on the aforesaid Suspicion, and that he likewise Sommon all evidences that he Shall Be informed of as materiall in the Complaint, and that She continue in the Sheriff Costody unless She give good bond And Security for her Appearance at the next Court, and that She be of the Good behaviour towards her Majestie and all her Leidge people in the mean time.

Whereas for this Severall Courts the Business between luke hill and Grace Sherwood on Suspicion of witchcraft have Been for Severall things omitted, perticularly for want of a Jury to Serch her, and the Court being Doubtfull That they Should not get one this Court, and being willing to have all means possible tryed either to acquit her or to Give more Strength to the Suspicion that She might be Dealt with as Deserved, therefore it was Ordered that this Day by her own Consent to be tried in the water by Ducking, but the weather being very Rainy and Bad Soe that possibly it might endanger her health, it is therefore ordered that the Sheriff request the Justices precisely to appear on wednessday next by tenn of the Clock at the Court house, and that he Secure the body of the Sd Grace till that time to be forth Coming, then to be Dealt with as afore sd. Jonathan Richason, Henry Chapman.

Whereas Grace Sherwood being Suspected of witchcraft have a long time waited for a Fit uppertunity For a Further Examinacion, and by her Consent and Approbacion of this Court, it is ordered that the Sheriff take all Such Convenient assistance of boats and men as Shall be by him thought Fitt, to meet at Jonathan Harpers plantacion in order to take the Sd Grace forthwith and put her into the above mans Debth and try her how 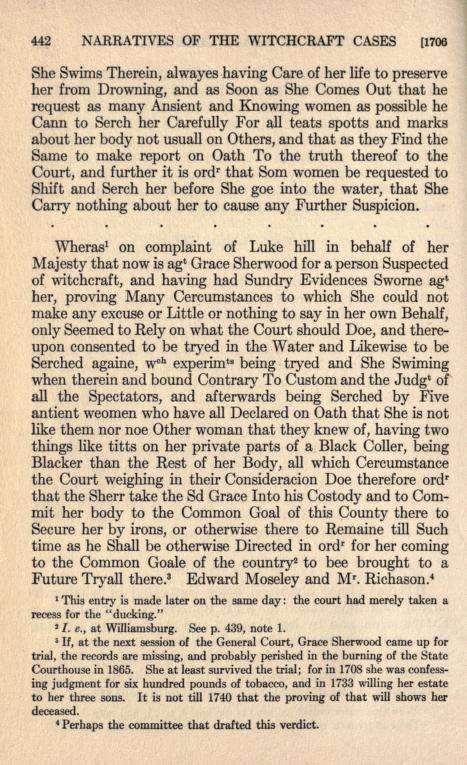 She Swims Therein, alwayes having Care of her life to preserve her from Drowning, and as Soon as She Comes Out that he request as many Ansient and Knowing women as possible he Cann to Serch her Carefully For all teats spots and marks about her body not usuall on Others, and that as they Find the Same to make report on Oath To the truth thereof to the Court, and further it is ordered that Som women be requested to Shift and Serch her before She goe into the water, that She Carry nothing about her to cause any Further Suspicion.

Wheras on complaint of Luke hill in behalf of her Majesty that now is against Grace Sherwood for a person Suspected of witchcraft, and having had Sundry Evidences Sworne against her, proving Many Cercumstances to which She could not make any excuse or Little or nothing to say in her own Behalf, only Seemed to Rely on what the Court should Doe, and thereupon consented to be tryed in the Water and Likewise to be Serched againe, which experiments being tryed and She Swiming when therein and bound Contrary To Custom and the Judgment of all Spectators, and afterwards being Serched by Five antient women who have all Declared on Oath that She is not like them nor noe Other woman that they knew of, having two things like titts on her private parts of a Black Coller, being Blacker than the Rest of her Body, all which Cercumstance the Court weighing in their Consideracion Doe therefore order that the Sheriff take the Sd Grace Into his Costody and to Commit her body to the Common Goal [jail] of this County there to Secure her by irons, or otherwise there to Remaine till Such time as he Shall be otherwise Directed in order for her coming to the Common Goale of the country [in Williamsburg] to bee brought to a Future Tryall there. Edward Moseley and Mr. Richason.

RELATED CONTENT
Categories:
Type:
MAP
TIMELINE
January 1706
Luke Hill formally charges Grace Sherwood with witchcraft.
March 1706
In response to Luke Hill's charge of witchcraft against Grace Sherwood, the Princess Anne County Court impanels a jury of women, including Elizabeth Barnes, to search Sherwood's body for witch's marks. The jury finds two marks, and Sherwood is ordered to jail to await trial.
July 10, 1706
Grace Sherwood undergoes a water test to determine whether she is guilty of the charge of witchcraft. Sherwood floats, indicating her guilt, and once ashore is examined for witch's marks. A jury of women finds two marks. Sherwood is imprisoned and ordered to undergo another trial. It is unclear whether the second trial ever occurred.
FURTHER READING