Skip to content
Author: John M. BrownTranscription Source: “The Appeal” from Proceedings of the Convention of the Colored People of VA., Held in the City of Alexandria (Alexandria: Cowing and Gillis, 1865), 8‒10.
FULL TEXT 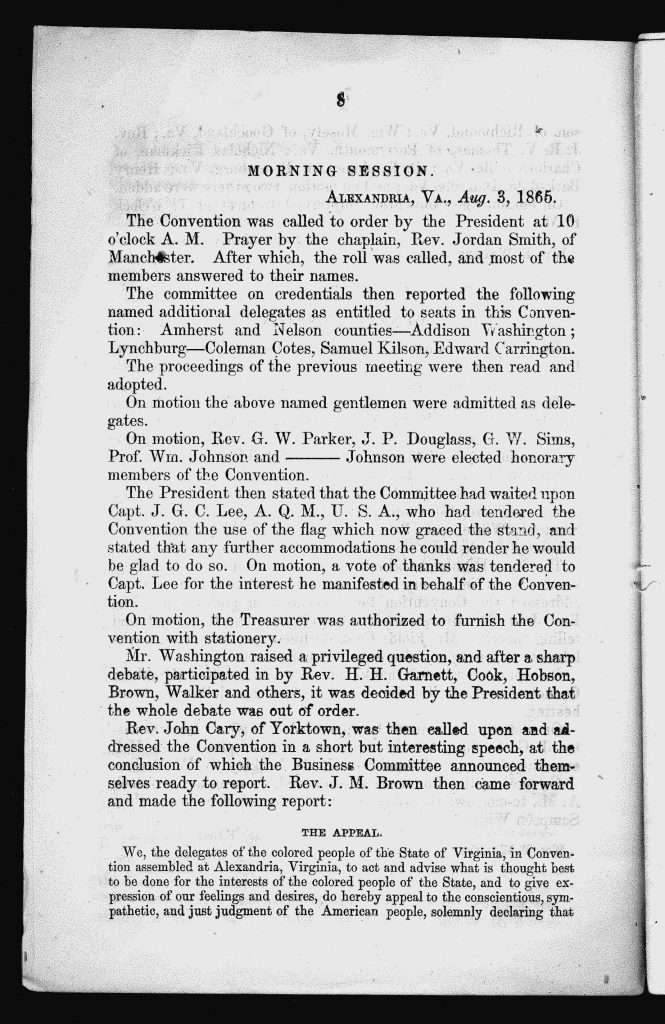 Proceedings of the Convention of the Colored People of VA., Held in the City of Alexandria, Page 8

We, the delegates of the colored people of the State of Virginia, in Convention assembled at Alexandria, Virginia, to act and advise what is thought best to be done for the interests of the colored people of the State, and to give expression of our feelings and desires, do hereby appeal to the conscientious, sympathetic, and just judgment of the American people, solemnly declaring that 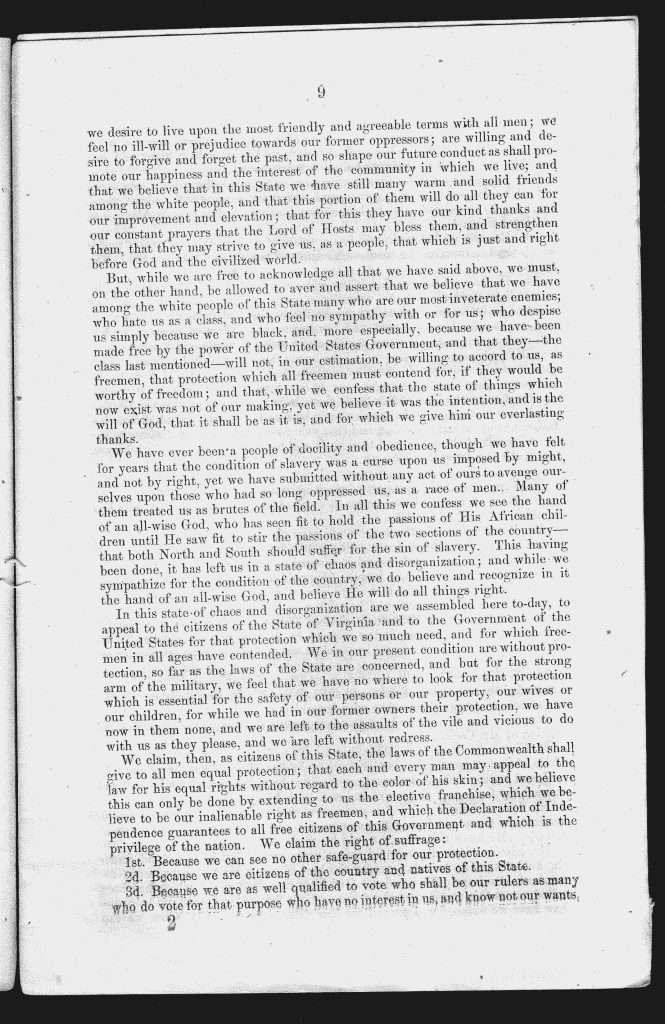 Proceedings of the Convention of the Colored People of VA., Held in the City of Alexandria, Page 9

we desire to live upon the most friendly and agreeable terms with all men; we feel no ill-will or prejudice towards our former oppressors; are willing and desire to forgive and forget the past, and so shape our future conduct as shall promote our happiness and the interest of the community in which we live; and that we believe in this State we have still many warm and solid friends among the white people, and that this portion of them will do all they can for our improvement and elevation; that for this they have our kind thanks and our constant prayers that the Lord of Hosts may bless them, and strengthen them, that they may strive to give us, as a people, that which is just and right before God and the civilized world.

But, while we are free to acknowledge all that we have said above, we must, on the other hand, be allowed to aver and assert that we believe that we have among the white people of this State many who are our most inveterate enemies; who hate us as a class, and who feel no sympathy with or for us; who despise us simply because we are black, and, especially, because we have been made free by the power of the United States Government, and that they—the class last mentioned—will not, in our examination, be willing to accord to us, as freemen, that protection which all freemen must contend for, if they would be worthy of freedom; and that, while we confess that the state of things which now exist was not of our making, yet we believe it was the intention, and is the will of God, that it shall be as it is, and for which we give him our everlasting thanks.

We have ever been a people of docility and obedience, though we have felt for years that the condition of slavery was a curse upon us imposed by might, and not by right, yet we have submitted without any act of ours to avenge ourselves upon those who had so long oppressed us, as a race of men. Many of them treated us as brutes of the field. In all this we confess we see the hand of an all-wise God, who has seen fit to hold the passions of His African children until He saw fit to stir the passions of the two sections of the country—that both North and South should suffer for the sin of slavery. This having been done, it has left us in a state of chaos and disorganization; and while we sympathize for the condition of the country, we do believe and recognize in it the hand of an all-wise God, and believe He will do all things right.

In this state of chaos and disorganization we are assembled here to-day, to appeal to the citizens of the State of Virginia and to the Government of the United States for that protection which we so much need, and for which freemen in all ages have contended. We in our present condition are without protection, so far as the laws of the State are concerned, and but for the strong arm of the military, we feel that we have no where to look for that protection which is essential for the safety of our persons or our property, our wives or our children, for while we had in our former owners their protection, we have now in them none, and we are left to the assaults of the vile and vicious to do with us as they please, and we are left without redress.

We claim, then, as citizens of this State, the laws of the Commonwealth shall give to all men equal protection; that each and every man may appeal to the law for his equal rights without regard to the color of his skin; and we believe this can only be done by extending to us the elective franchise, which we believe to be our inalienable right as freemen, and which the Declaration of Independence guarantees to all free citizens of this Government and which is the privilege of the nation. We claim the right of suffrage:

1st. Because we can see no other safe-guard for our protection.

2d. Because we are citizens of the country and natives of this State.

3d. Because we are as well qualified to vote who shall be our rulers as many who do vote for that purpose who have no interest in us, and know not our wants. 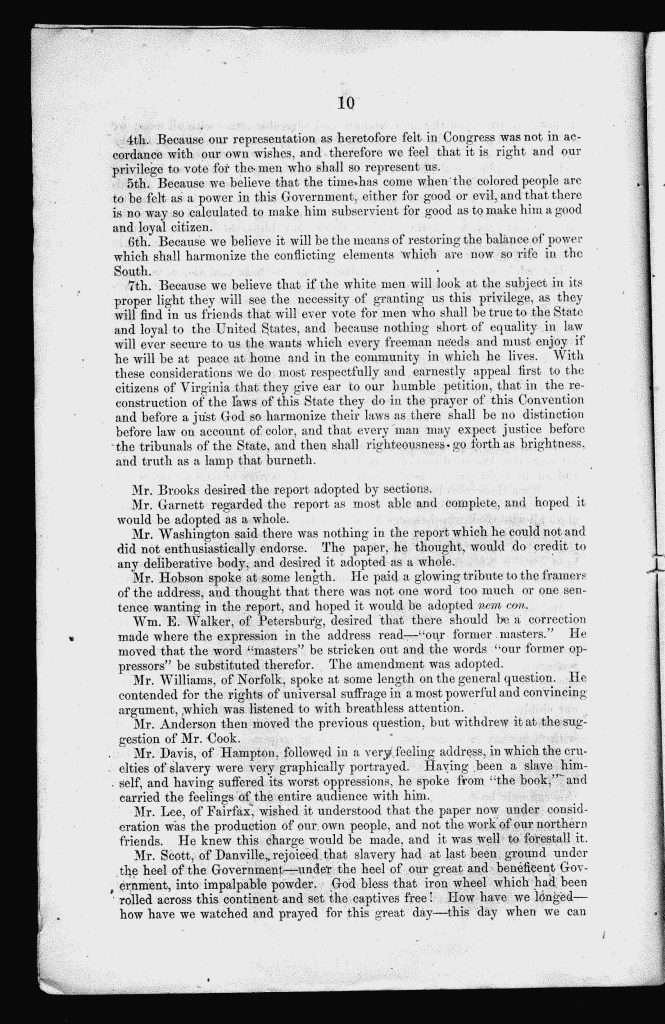 Proceedings of the Convention of the Colored People of VA., Held in the City of Alexandria, Page 10

4th. Because our representation as heretofore felt in Congress was not in accordance with our own wishes, and therefore we feel it is right and our privilege to vote for the men who shall so represent us.

5th. Because we believe that the time has come when the colored people are to be felt as a power in this Government, either for good or evil, and that there is no way so calculated to make him subservient for good as to make him a good and loyal citizen.

6th. Because we believe it will be the means of restoring the balance of power which shall harmonize the conflicting elements which are now so rife in the South.

7th. Because we believe that if the white men will look at the subject in its proper light they will see the necessity of granting us this privilege, as they will find in us friends that will ever vote for men who shall be true to the State and loyal to the United States, and because nothing short of equality in law will ever secure to us the wants which every freeman needs and must enjoy if he will be at peace at home and in the community in which he lives. With these considerations we do most respectfully and earnestly appeal first to the citizens of Virginia that they give ear to our humble petition, that in the reconstruction of the laws of this State they do in the prayer of this Convention and before a just God so harmonize their laws as there shall be no distinction before law on account of color, and that every man may expect justice before the tribunals of the State, and then shall righteousness go forth as brightness, and truth as a lamp that burneth.