Skip to content
Author: House of DelegatesTranscription Source: Journal of the House of Delegates of the Commonwealth of Virginia; Begun and Held in the City of Richmond, in the County of Henrico, on Monday, the Eighteenth Day of October, in the Year of Our Lord One Thousand Seven Hundred and Eighty-Four(Richmond: Thomas W. White, 1828), 18–19.
FULL TEXT
— page 18 — 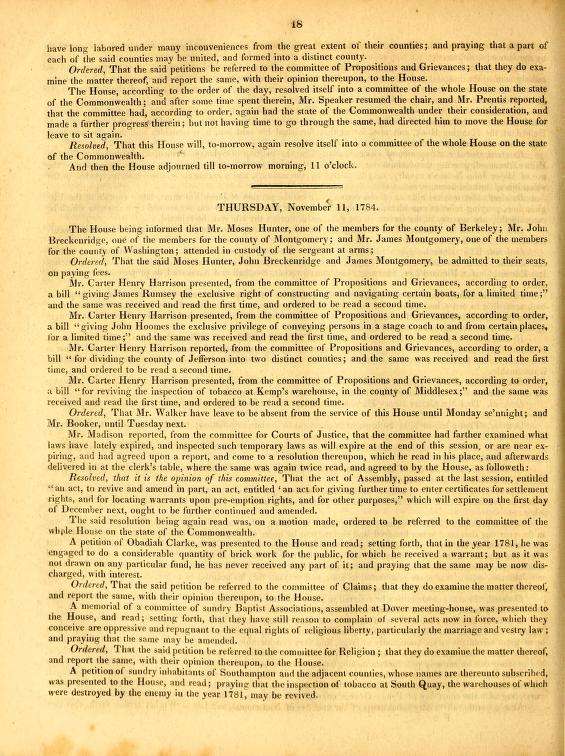 […] A memorial of a committee of sundry Baptists Associations, assembled at Dover meeting-house, was presented to the House, and read; setting forth, that they have still reason to complain of several acts now in force, which they conceive are oppressive and repugnant to the equal rights of religious liberty, particularly the marriage and vestry law; and praying that the same may be amended.

Ordered, That the said petition be referred to the committee for Religion; that they do examine the matter thereof, and report the same, with their opinion thereupon, to the House.

A petition of sundry inhabitants of Southampton and the adjacent counties, whose names are thereunto subscribed, was presented to the House, and read; praying that the inspection of tobacco at South Quay, the warehouses of which were destroyed by the enemy in the year 1781, may be revived. 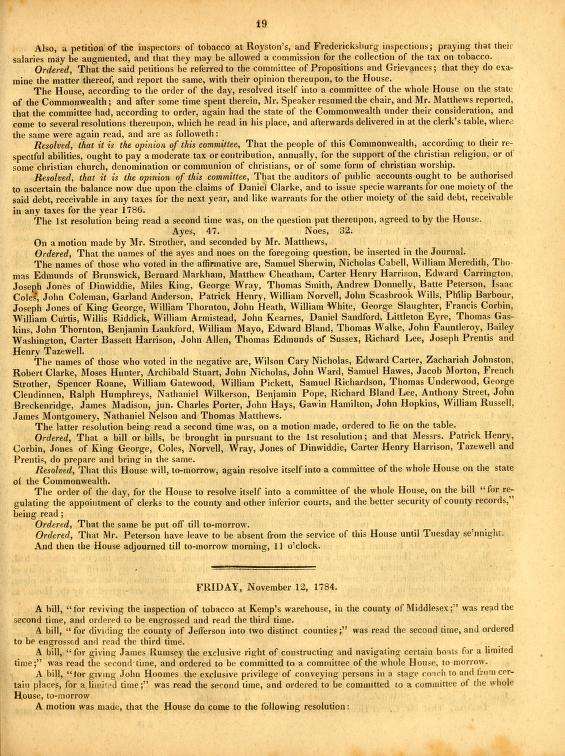 Also, a petition of the inspectors of tobacco at Royston’s, and Fredericksburg inspections; praying that their salaries may be augmented, and that they may be allowed a commission for the collection of the tax on tobacco.

Ordered, That the said petitions be referred to the committee of Propositions and Grievances; that they do examine the matter thereof, and report the same, with their opinion thereupon, to the House.

The House, according to the order of the day, resolved itself into a committee of the whole House on the state of the Commonwealth; and after some time spent therein, Mr. Speaker resumed the chair, and Mr. Matthews reported, that the committee had, according to the order, again had the state of the Commonwealth under their consideration, and come to several resolutions thereupon, which he read in his place, and afterwards delivered in at the clerk’s table, where the same were again read, and are as followeth:

Resolved, that it is the opinion of this committee, That the people of this Commonwealth, according to their respectful abilities, ought to pay a moderate tax or contribution, annually, for the support of the christian religion, or of some christian church, denomination or communion of christians, or of some form of christian worship.

The 1st resolution being read a second time was, on the question put thereupon, agreed to by the house.

On a motion made by Mr. Strother, and seconded by Mr. Matthews,

Ordered, That the names of the ayes and noes on the foregoing question, be inserted in the Journal.

The latter resolution being read a second time was, on a motion made, ordered to lie on the table.