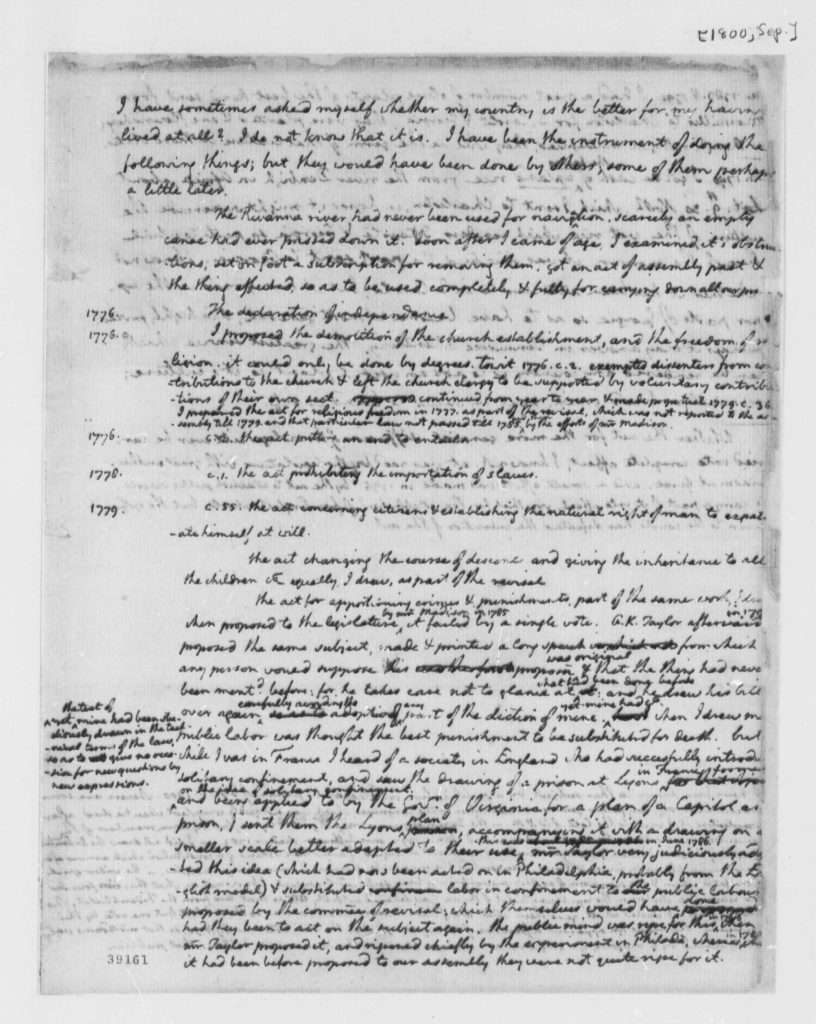 Summary of Public Service by Thomas Jefferson (After September 2, 1800), Page 1

I have sometimes asked myself whether my country is the better for my having lived at all? I do not know that it is. I have been the instrument of doing the following things; but they would have been done by others; some of them perhaps a little later.

The Rivanna river had never been used for navigation. scarcely an empty canoe had ever passed down it. soon after I came of age, I examined it’s obstructions, set on foot a subscription for removing them, got an act of assembly past & the thing effected, so as to be used completely & fully for carrying down all our pro[duce.]

1776. The declaration of independence.

1776. I proposed the demolition of the church establishment, and the freedom of religion. it could only be done by degrees. towit 1776. c. 2. exempted dissenters from contributions to the church & left the church clergy to be supported by voluntary contributions of their own sect. continued from year to year & made perpetual 1779. c. 36. I prepared the act for religious freedom in 1777. as part of the revisal, which was not reported to the assembly till 1779. and that particular law not passed till 1785. and then by the efforts of mr Madison.

1779. c. 55. the act concerning citizens & establishing the natural right of man to expatriate himself at will.

[1779] the act of changing the course of descent and giving the inheritance to all children &c equally I drew, as part of the revisal

[1779] the act for apportioning crimes & punishments, part of the same work, I drew. when proposed to the legislature by mr Madison in 1785 it failed by a single vote. G. K. Taylor afterwards in 1796 proposed the same subject, made & printed a long speech from which any person would suppose his propson was original & that the thing had never been mentd. before: for he takes care not to glance at what had been done before and he drew his bill over again, carefully avoiding the adoption of any part of the diction of mine. yet the text of mine had been studiously drawn in the technical terms of the law, so as to give no occasion for new questions by new expressions. when I drew m[ine] public labor was thought the best punishment to be substituted for death. but while I was in France I heard of a society in England who had successfully introdu[ced] solitary confinement, and saw the drawing of a prison at Lyons in France formed on the idea of solitary confinement. and being applied to by the Govr. of Virginia for a plan of a Capitol a[nd] prison, I sent them the Lyons plan, accompanying it with a drawing on a smaller scale better adapted to their use. this was in June 1786. mr Taylor very judiciously adopted this idea (which had now been acted on in Philadelphia, probably from the English model) & substituted labor in confinement to the public labour proposed by the commee of revisal; which themselves would have done had they been to act on the subject again. the public mind was ripe for this in 1796 when mr Taylor proposed it, and ripened chiefly by the experiment in Philada, whereas in 1785 when it had been before proposed to our assembly they were not quite ripe for it. 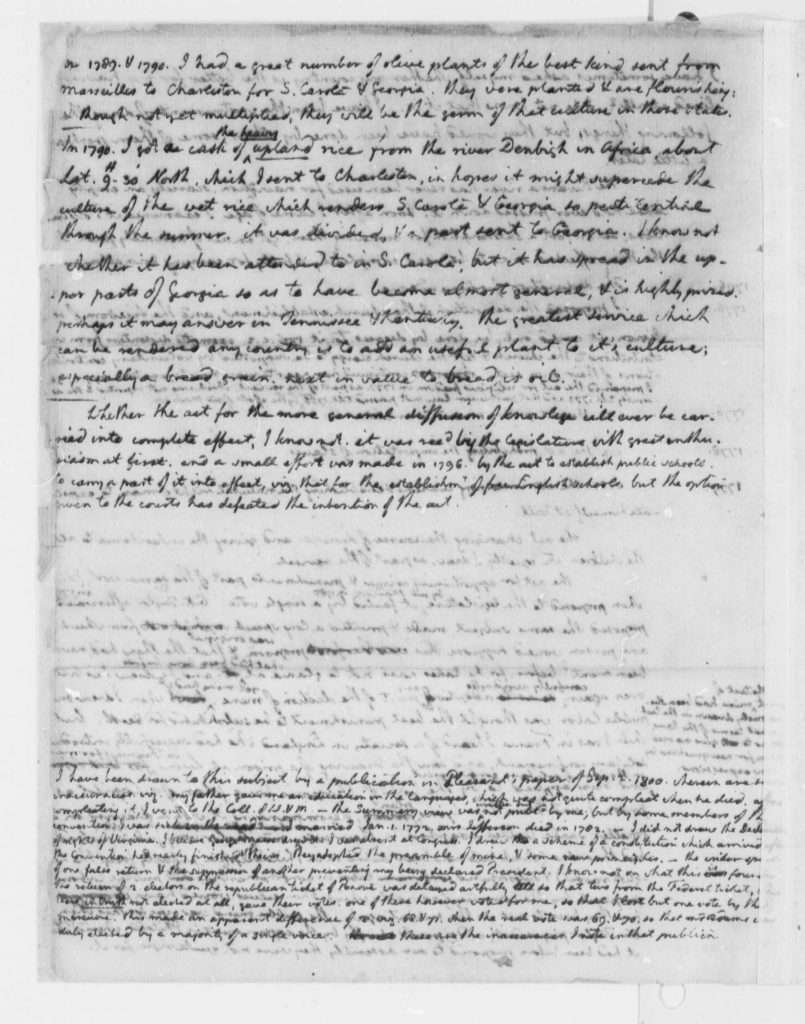 Summary of Public Service by Thomas Jefferson (After September 2, 1800), Page 2

In 1789. & 1790. I had a great number of olive plants of the best kind sent from Marseilles to Charleston for S. Carola & Georgia. they were planted & are flourishing: & though not yet multiplied, they will be the germ of that culture in those states.

In 1790. I got a cask of the heavy upland rice from the river Denbigh in Africa, about Lat. 9 H. 30′ North, which I sent to Charleston, in hopes it might supercede the culture of the wet rice which renders S. Carola & Georgia so pestilential through the summer. it was divided, & a part sent to Georgia. I know not whether it has been attended to in S. Carola; but it has spread in the upper parts of Georgia so as to have become almost general, & is highly prized. perhaps it may answer in Tennissee & Kentucky. the greatest service which can be rendered any country is to add an useful plant to it’s culture; especially a bread grain. next in value to bread is oil.

Whether the act for the more general diffusion of knowlege will ever be carried into complete effect, I know not. It was recd by the legislature with great enthusiasm at first. and a small effort was made in 1796. by the act to establish public schools, to carry a part of it into effect, viz. that for the establishmt of free English schools. but the option given to the courts has defeated the intention of the act.

I have been drawn to this subject by a publication in Pleasant’s paper of Sep. 2. 1800. wherein are some inaccuracies. viz. my father gave me an education in the languages, which was not quite compleat when he died. after compleating it, I went to the Coll. of W. & M—the Summary view was written but not publd by me; but by some members of the convention. I was sick on the road.—I married Jan. 1. 1772. mrs Jefferson died in 1782.—I did not draw the Declaration of rights of Virginia. I believe George Mason drew it. I was absent at Congress. I drew a scheme of a constitution which arrived after the Convention had nearly finished theirs. they adopted the preamble of mine, & some new principles.—the writer speaks of one false return & the suppression of another preventing my being declared President. I know not on what this is founded. the return of 2. electors on the republican ticket of Pensva was delayed artfully so that two from the Federal ticket, who were in truth not elected at all, gave their votes. one of these however voted for me, so that I lost but one vote by the maneuvre. this made an apparent difference of 2. viz. 68. & 71. when the real vote was 69. & 70. so that mr Adams was duly elected by a majority of a single voice. these are the inaccuracies I note in that publicn.