In 1717 Thomas Lee bought the Clifts, a tobacco plantation in Westmoreland County, from the descendants of colonist Nathanial Pope. Lee, a politician and planter, lived with his family at his father’s plantation at Machodoc Creek until 1729, when his house burned to the ground. Afterward he turned his attention to the Clifts property, renaming it Stratford—for his grandfather’s estate in England—in 1734. A few years later Lee decided to build a dwelling near the Potomac River, where Stratford now stands. 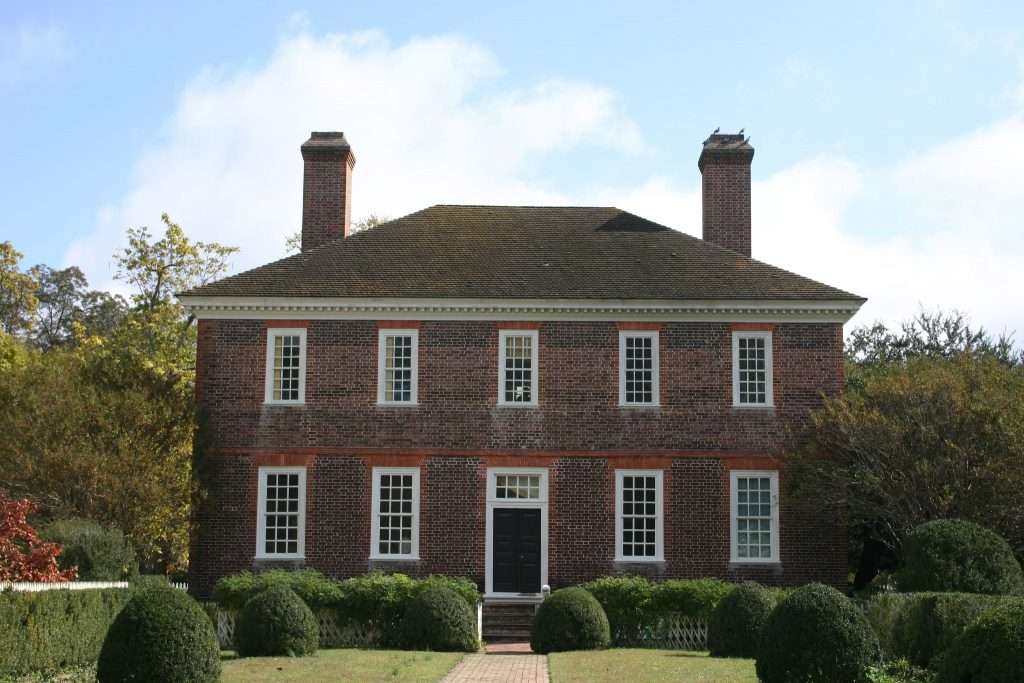 Many key details concerning the construction of Stratford are uncertain. First, it is unknown when the Great House—the largest and most prominent of the buildings on the property—was completed, or when exactly work began. Existing evidence points to construction beginning in 1738, with the work completed early in the 1740s. The architect of the Great House is also unknown, although a likely candidate is Richard Taliaferro, who designed what is now called the Wythe House in Williamsburg, among other buildings. The Great House is set on a steep bluff that slopes off gently to the east; this provided access to the Potomac River while also offering protection from river invaders and the natural erosion that endangers a house closer to the water. Materials for the house came from the surrounding property: timber from forested land nearby, red clay for bricks, and oyster shells for mortar.

Virtual Tour of Stratford Hall
The Great House at Stratford is a two story, H-shaped brick structure. The design of the front and back of the house mirror each other—specifically, the arrangement and number of the windows and the exterior central stairways. The house has four chimneys, each in two stacks. The upper floor included the Great Hall, parlor, dining room, library, and bedrooms for the main residents; the ground floor was used for storage, offices, and service areas. The kitchen was located outdoors and the original still stands today. The original house included four outlying buildings, including an overseer’s house, stables, a gardener’s shed, and a building used as a school for the Lee children.

Today, two stone slave cabins are located near the gardens. With their windows and stone chimneys, these cabins are 1930s-era reproductions of the late eighteenth-century structures that housed domestic workers and other skilled laborers at Stratford. Field laborers typically lived in small wooden dwellings with wooden chimneys and dirt floors; no reproductions of these structures exist at Stratford. The mill that stands on the Stratford property is a 1939 recreation of the one that Lee commissioned in the 1730s in order to grind corn into meal and wheat into grain.

In Stratford Hall, Thomas Lee established the seat of one of the most prominent families in colonial Virginia. Among its notable residents were Philip Ludwell Lee, who was elected to the House of Burgesses and appointed to the governor’s Council; Francis Lightfoot Lee, signer of the Declaration of Independence; Richard Henry Lee, who signed the Declaration and also defended Stratford from British forces in 1781; Henry Lee III, Revolutionary War hero and governor of Virginia; and Robert E. Lee, the Confederate general. Although Robert E. Lee lived only a few years at Stratford, he remembered his childhood home fondly, writing to his wife in 1861, “In the absence of a home, I wish I could purchase ‘Stratford.’ That is the only other place that I could go to … that would inspire me with feelings of pleasure and local love.”

Henry Lee IV, Lee’s half-brother, was the last of the Lees to be master of Stratford. He sold the property in 1822, after he was convicted of embezzling money from his sister-in-law and ward, Elizabeth McCarty, and forced by the court to repay her. His friend William Clark Somerville bought the property for $25,000. After Somerville’s unexpected death in 1826, the Westmoreland County Court seized the property and put it up for auction. The buyer was Henry Storke—who in 1826 had married Elizabeth McCarty. Elizabeth McCarty Storke was the mistress of Stratford until her death in 1879. Storke left the house to her great-nephews, Charles and Richard Stuart. They owned the house until 1929, when the newly incorporated Robert E. Lee Memorial Foundation (later the Robert E. Lee Memorial Association) bought the house for $240,000. The house and grounds were restored and dedicated in 1935 and are open to visitors. 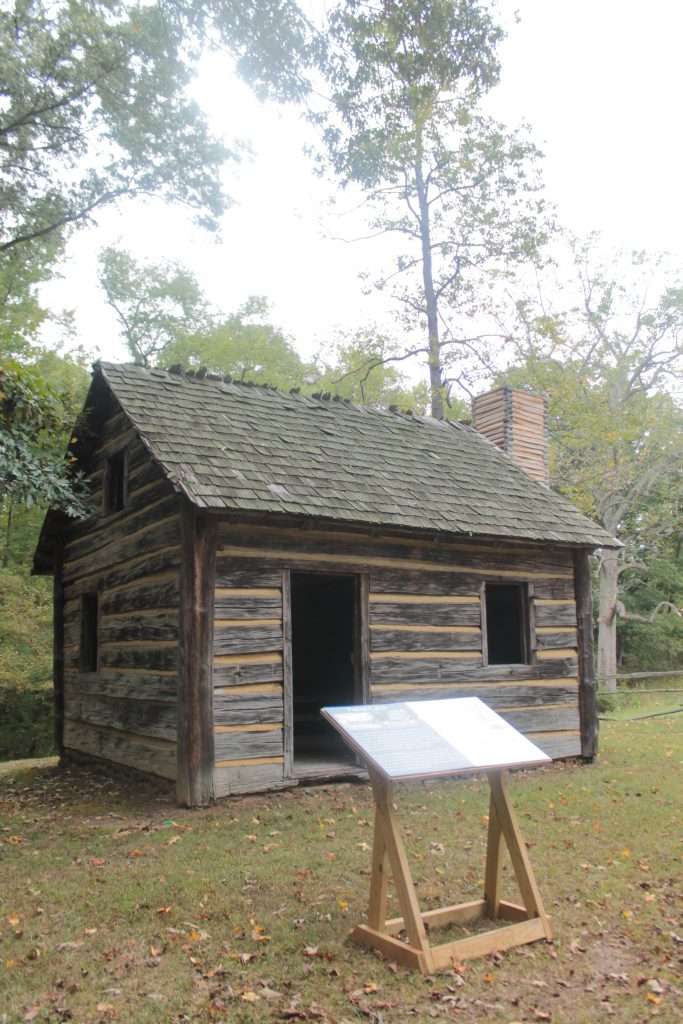 Elizabeth McCarty Storke lived at the Great House for more than fifty years, but Stratford’s longest-term residents were African American. William Payne, born at Stratford in 1833, was a butler and house servant who married Hannah Jackson, from the nearby Popes Creek plantation. He lived at Stratford until his death in 1927. His son, William Wesley Payne, was also a longtime resident. Born at Stratford when Elizabeth Storke owned it, he continued to live and work there after it passed to the Stuart family and then to RELMA. May Field Lanier, the first president of what is now RELMA, offered to build a monument to Wes Payne; he requested instead that a cabin, similar to the one he was born in, be built near the Great House. Construction on the cabin was completed in 1941 and it continues to stand. Payne and his wife Louisa, who worked at Stratford as a cook, had ten children. One of them, Ulysses Sylvester “Joe” Payne, worked at Stratford for fifty-three years; his cousin, Laura Payne, worked there for fifty-seven. Several members of the Payne family are buried at Shiloh Baptist Church, which is located across from Stratford; others are buried in the slave cemetery at Stratford.

Tobacco was already being cultivated on the Clifts property when Thomas Lee bought it in 1717, and Lee continued to grow it as Stratford’s main crop. The practice of growing multiple crops of tobacco on one field exhausted the land quickly, and the Lee family periodically purchased additional land to compensate for the unproductive fields. The plantation prospered because of its location along the Potomac River, which allowed it to become a trading center in the eighteenth century. (A public wharf and tobacco inspection station were built at Stratford Landing in 1759). At the same time, the plantation was self-sufficient, producing enough food and clothing for its white and enslaved inhabitants. 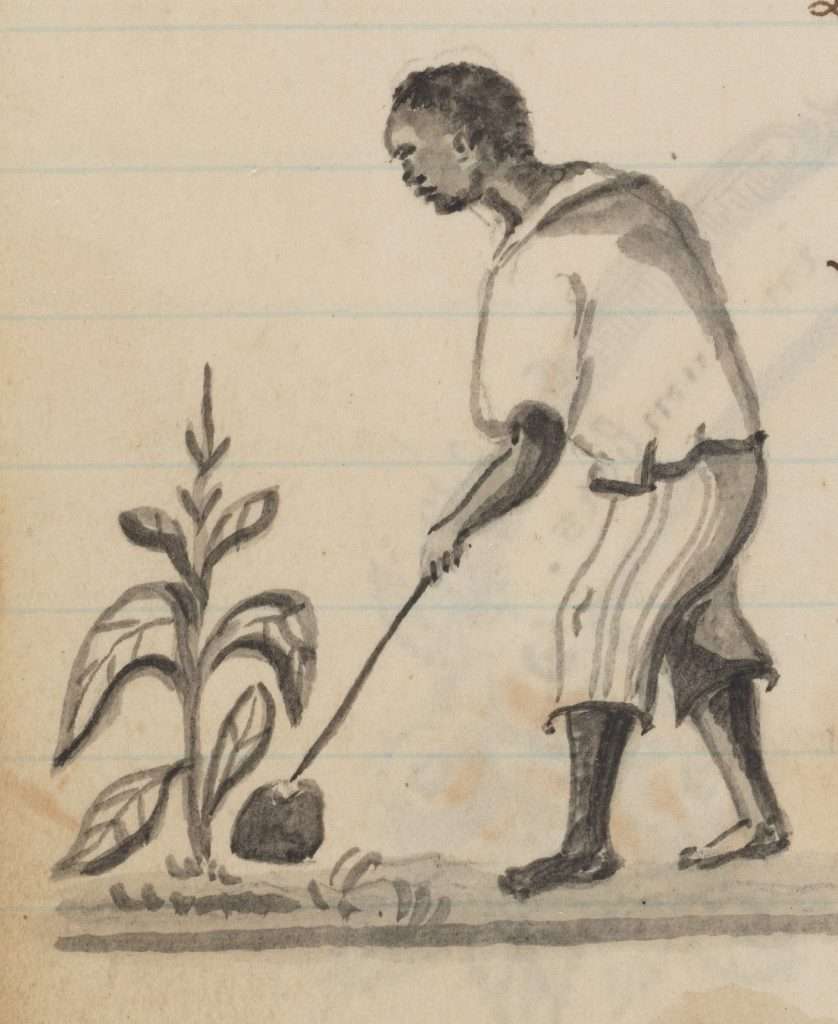 None of this would have been possible without enslaved workers. Tobacco cultivation is labor intensive, and Stratford employed the gang labor system to harvest the crop. Enslaved field hands worked from sun-up to sundown under the supervision of white overseers who set the pace and punished those who fell behind. They grew fruit and vegetables in Stratford’s orchards and gardens, and wheat, barley, oats, flax, and corn in its fields. Enslaved domestic workers fed, clothed, and cared for the Lees. Enslaved laborers carded wool, spun yarn, wove fabric, and sewed; they repaired the Great House, made furniture and simple tools, built ships, and distilled liquor.

When Stratford’s second owner, Philip Ludwell Lee, died in 1775, Stratford had one of the largest slave populations in Virginia. He left 137 enslaved workers to be divided among his heirs. Over time, the Lees sold or hired out slaves to cover their expenses and debts. According to census records, by the time the Storkes moved to Stratford in 1830, the African American population at Stratford was 61. Over the next few decades, Elizabeth Storke scaled back farming operations considerably. By 1860 she had rented out most of Stratford’s land, maintaining only enough to grow hay and potatoes for personal use. According to the 1860 census, 31 enslaved workers lived at Stratford.

Ancient Whale Skull Discovery
Stratford’s cliffs have their own distinctive geological history. The 150-foot cliffs along the Potomac River were once the floor of a coastal ocean covering the land that is now Stratford plantation. Some 10 to 17 million years ago, during the Miocene epoch, the sea receded, leaving behind a considerable fossil record. These fossils were likely first studied in 1820 by geologist John Finch, who wrote, “Every geologist who wishes to acquire a knowledge of the tertiary formations of the United States, should visit the cliffs at Stratford.” In 1997, RELMA closed the shoreline bordering the cliffs to deter fossil poachers and to prevent accidents caused by shoreline erosion.
RELATED CONTENT
Categories:
MAP
TIMELINE
1717
The politician and planter Thomas Lee purchases the Clifts, a tobacco plantation in Westmoreland County, from the descendants of colonist Nathanial Pope.
1734
Thomas Lee renames the Clifts plantation; he chooses the name Stratford, after his grandfather's estate in England.
ca. 1740
Construction on Stratford Hall, Thomas Lee's estate in the Northern Neck of Virginia, is completed, and Lee and his family move into the new residence.
1759
A public wharf and tobacco inspection station are constructed at Stratford Landing.
August 1769
A hurricane sweeps up the Chesapeake Bay and the Potomac River, destroying Stratford Landing and several tobacco inspection warehouses operated by the Lee family.
May 1770
The House of Burgesses votes to allow time and public funds to speed repairs at Stratford Landing, so that tobacco inspections can continue to take place there. Richard Henry Lee takes a leave of absence from the House and does not return until after the 1771 session.
February 21, 1775
Richard Henry Lee's eldest brother, Philip Ludwell Lee, dies. Because Philip Lee's oldest son, Philip Lee II, is still a child, Richard Henry Lee effectively becomes master of Stratford Hall.
April 9, 1781
Richard Henry Lee leads the Westmoreland County militia against British invaders at Stratford Landing.
April 1782
Henry Lee III and Matilda Ludwell Lee marry. They settle at Stratford Hall, the Lee family plantation in Westmoreland County.
January 19, 1807
Robert E. Lee is born at Stratford Hall, Westmoreland County.
1808
Henry Lee III flees Stratford Hall to escape his creditors. His son, Henry Lee IV, becomes the master of the estate.
June 1822
William C. Somerville buys Stratford Hall from Henry Lee IV for $25,000.
1828
After William C. Somerville's death, Westmoreland County Court seizes Stratford Hall and auctions the property. The buyer is Henry Storke.
1879
Elizabeth McCarty Storke, owner of Stratford Hall, dies. Her great-nephews, Charles and Richard Stuart, inherit the estate.
1929
The Robert E. Lee Memorial Foundation (later the Robert E. Lee Memorial Association) acquires Lee's birthplace, Stratford Hall.
FURTHER READING
CITE THIS ENTRY