Spencer was born Annie Bethel Scales Bannister to Joel Cephus Bannister and Sarah Louise Scales on February 6, 1882, on a farm in Henry County. Both parents were of mixed lineage. Her father, born a slave in Henry County in 1862, was of black, white, and Seminole Indian ancestry. Her mother was born in 1866 on Reynolds Plantation in Critz, in neighboring Patrick County. According to Spencer’s biographer, J. Lee Greene, Sarah Louise Scales “was an illegitimate child; her mother was a former slave and her father a wealthy Virginia aristocrat … well known in American aristocracy of the nineteenth and twentieth centuries.” Rumors passed down in the Spencer family have long suggested that Sarah’s father was a Reynolds, which would have made her a close relative of R. J. Reynolds and J. Sargeant Reynolds.

Soon after Spencer was born, her family left their Henry County farm for Martinsville, where her father opened a saloon. When Bannister’s fervor for financial security clashed with his wife’s investment in morality, the couple separated. In 1886, Scales took Anne with her to Bramwell, West Virginia, but was unable to care for her. First, she placed Anne in the foster care of William Dixie and his wife, a prominent black couple in Bramwell. Then, in 1893, wanting a better education for her daughter, Scales enrolled the eleven-year-old in the Virginia Theological Seminary and College (now Virginia University of Lynchburg). 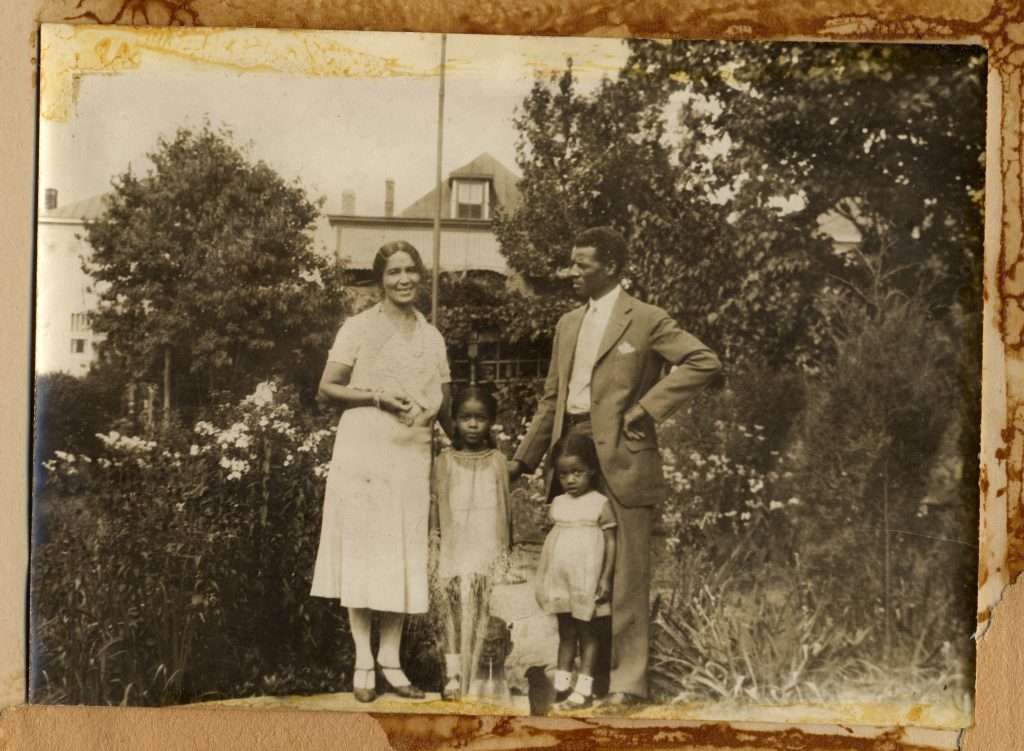 Anne Spencer With Her Husband and Grandchildren

Although Spencer left Bramwell barely literate, when she graduated from the Virginia Theological Seminary six years later she was valedictorian of her class. While in school, Anne met Edward Spencer, a fellow student who would become Lynchburg’s first parcel postman. They married in 1901 and the couple went on to have three children: Bethel, Alroy, and Chauncey. (Later Chauncey Spencer would help to initiate the training program that produced the Tuskegee Airmen.)

Spencer taught at her alma mater from 1910 until 1912. While there, she met and tutored Ota Benga, a pygmy who had been brought from the Belgian Congo and who had been placed on exhibit at the 1904 Saint Louis World’s Fair and the Bronx Zoo for several years before being sent to Lynchburg.

In 1924, Spencer was hired by the Jones Memorial Library’s board of trustees to work at the Dunbar High School library. Dunbar was Lynchburg’s African American high school and its library the only branch open to African Americans in the city. Between these two jobs, Spencer spent much of her time writing and serving on committees to improve the legal, social, and economic aspects of African Americans’ lives. During this time, Spencer also helped to establish the Lynchburg chapter of the NAACP and led a campaign to hire black teachers in black schools.

Anne Spencer Radio Segment
Spencer’s work with the NAACP brought James Weldon Johnson to town and launched Spencer’s literary career. Johnson was the Renaissance man of Harlem—a poet, diplomat, journalist, anthropologist, teacher, lawyer, and songwriter—and he came to Lynchburg in 1919 in his capacity as a field agent for the NAACP. During his visit, he befriended Spencer and encouraged her to publish her work. Spencer was as prolific a writer as she was reticent about publishing. Her often idiosyncratic poems were, even to Johnson, “perhaps too unconventional,” and when H. L. Mencken offered to help her publish them she turned him down. His criticism, coming as it did from a non-poet, was unwelcome. Johnson, apparently, had a lighter touch, and Spencer was published by such Harlem Renaissance publications as The Crisis, a journal founded by the NAACP, and The Lyric, a magazine for traditional poetry.

The relationship between Spencer’s race, her politics, and her poetry is complex. Although a civil rights activist, she opposed school integration as “tokenism,” and she did not address the issues of African Americans in her poetry nearly as often as did other Harlem Renaissance artists. Johnson once declared that “practically none of her poetry has been motivated by race,” and while that was an exaggeration, Spencer seemed more protective of her artistry than of her race. She explained her range of subject matter to Greene, saying, “I write about some of the things I love. But have no civilized articulation for the things I hate.”

In “White Things” (1923), one of her best known exceptions to Johnson’s claim, Spencer explored “whiteness” and how its supremacy is maintained only through the violent destruction of all things colored. Spencer explained that she wrote the poem in response to a lynching she had read about—perhaps the 1918 lynching of Mary Turner in Valdosta, Georgia—in which a pregnant woman and her unborn child were murdered. The poem opens with the observation that “Most things are colorful things—the sky, earth, and sea. / Black men are most men; but the white are free!”

Several lines later, the white “wand of power” has reduced the hills of “red and darkened pine” to blanched wastelands and has turned the “blood in a ruby rose / To a poor white poppy-flower.” The poem’s final verses turn from the transformative devastation that whites inflict upon the “natural” world to the violent “whitening” of blacks through their transmutation to ash and bone in the act of lynching:

They pyred a race of black, black men,
And burned them to ashes white; then,
Laughing, a young one claimed a skull,
For the skull of a black is white, not dull …

Critic Keith Clark, in his essay on Anne Spencer in Notable Black American Women, suggests “White Things” has come to be seen as “the quintessential ‘protest’ poem.” But given the graphic description and subject matter, Spencer’s editors at The Crisis found it unnerving and asked for revisions. Typically, she refused.

At other times, Spencer eschewed politics for primroses. “Life-Long Poor Browning” is at once a formally structured tribute to her favorite poet, Elizabeth Barrett Browning, and a mystic retreat into the natural world. Echoing Browning’s formality and constraint, she contrasts the precision of English gardens—”Primroses, prim indeed, in quiet ordered hedges …”—to the riotous beauty of Spencer’s familiar Blue Ridge Mountains:

According to Spencer’s biographer, J. Lee Greene, she wrote constantly, “on paper bags, in the margins and fly leaves of books, on envelopes, on tablets, on the telephone bill, on the back of a check.” “Dear Langston,” addressed to her friend and frequent correspondent Langston Hughes, appeared as a notation among Spencer’s papers. The poem seems to express frustration at her perceived inability to complete anything. In the early 1970s, Spencer admitted to Greene that she had a reputation for never answering letters, but she explained herself by saying, “I answered every letter I ever received, though at times—too many times—that answer did not get on the paper or in the mail.”

Virtual Tour of the Anne Spencer House and Garden Museum
Spencer’s fame increased over the years, but not only because of her poetry. She called the cottage in her large garden Edankraal, which combined her and her husband Edward’s names with the idea of sacred places such as the biblical Eden and the African kraal (an Afrikaans term for a native southern African village community). As early as the 1920s, the Spencers turned Edankraal into an artists’ salon, hosting W. E. B. Du Bois, Paul Robeson, Langston Hughes, and Gwendolyn Brooks, among others. While Jim Crow laws prevented these Harlem Renaissance luminaries from staying in Lynchburg’s hotels, they could find hospitality and intellectual stimulation with the Spencers. In this way, Spencer cemented her influence on Harlem—all the way from Virginia.

Anne Spencer died of cancer in Lynchburg at the age of ninety-three on July 27, 1975. Her house and garden at 1313 Pierce Street are maintained and open for tours. The Anne Spencer House became incorporated shortly after the house was designated as a Virginia Historic Landmark in the autumn of 1976.

RELATED CONTENT
Categories:
Type:
Related SOLs:
MAP
TIMELINE
February 6, 1882
Annie Bethel Scales Bannister is born on a farm in Henry County.
1886
Sarah Scales Bannister moves to Bramwell, West Virginia, with her daughter Annie.
1893
Annie Bannister, at the insistence of her mother, who wanted her to have a better education, attends the Virginia Theological Seminary and College at the age of eleven.
1901
Annie Bannister and Edward Spencer marry and move to 1313 Pierce Street in Lynchburg.
1910—1912
Anne Spencer teaches at Virginia Theological Seminary and College.
1919
James Weldon Johnson travels to Lynchburg as a field agent for the National Association for the Advancement of Colored People. During this time, he meets Anne Spencer and helps to launch her literary career.
March 1923
Anne Spencer's poem "White Things" is published in The Crisis.
1924
Anne Spencer is hired by the Jones Memorial Library board of trustees to work at the Dunbar High School library in Lynchburg.
July 27, 1975
Anne Spencer dies of cancer.
1976
The Anne Spencer House is designated as a Virginia Historic Landmark.
FURTHER READING
CITE THIS ENTRY