During the Union army’s siege of Petersburg (June 15, 1864–April 2, 1865), the City Point portion of the railroad was of vital importance to Union general Ulysses S. Grant. Controlling the rail system gave Grant the dual benefit of quickly moving and supplying his own army to the south and east of Petersburg while simultaneously refusing the entrenched Confederates food, supplies, and reinforcements. On April 1, 1865, the Union general Philip H. Sheridan defeated Confederate forces under George E. Pickett in the Battle of Five Forks, forcing General Robert E. Lee to abandon efforts to save Petersburg and the Confederate capital at Richmond. Faced with starvation and devoid of fresh troops, Lee maneuvered his Army of Northern Virginia west toward Lynchburg. Grant, in close pursuit, followed just below Lee’s bedraggled army, utilizing the route of the South Side Railroad. This tactic prevented the Confederate army from turning south and allowed Grant to intercept food supplies destined for the Confederate troops in the town of Burkeville, about sixty miles west of Petersburg.

Unable to turn south and forced into a series of long night marches, Lee’s forces continued west, hoping to resupply in Farmville. Exhausted and starving, large gaps began to appear in the retreating Confederate column. Detachments of Grant’s army caught up to the rear-most section of Lee’s army on April 6, 1865, at Sailor’s Creek. Lee lost nearly a quarter of his army in the ensuing engagements causing him to remark, “My God, has the army been dissolved?” 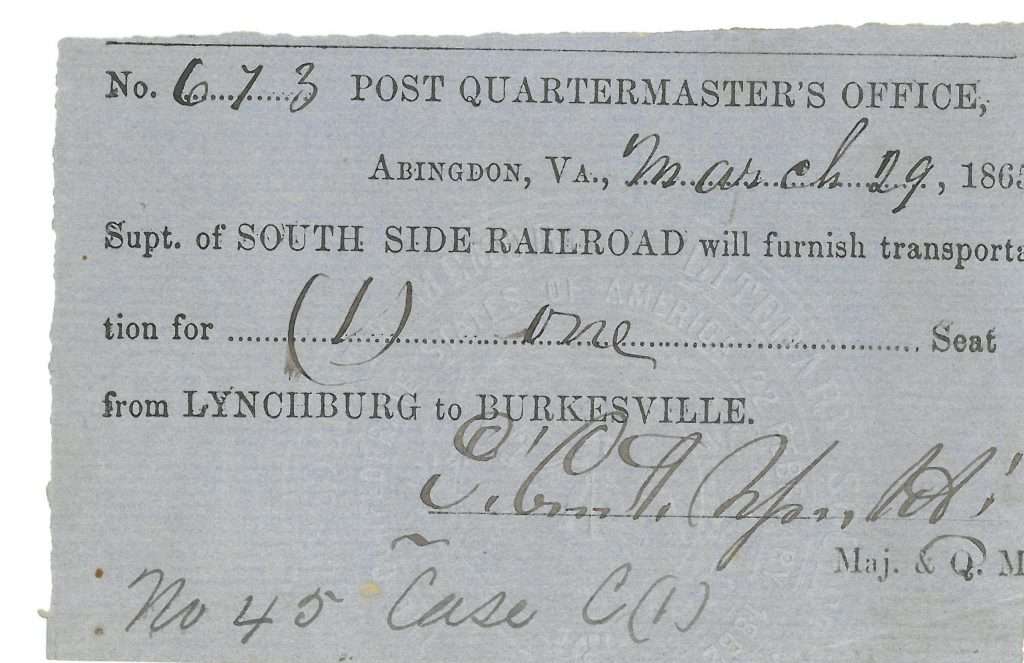 The next morning, retreating survivors crossed the South Side Railroad’s High Bridge. An impressive, 2,400-foot-long structure, the bridge was built with almost four million tons of brick and twenty-one piers to span the Appomattox River valley at a height of 160 feet. As Lee’s remnant army crossed into Farmville, they attempted to burn it as they went, thereby severely limiting Grant’s pursuit. Union forces, however, were able to extinguish the fire before it destroyed the bridge and continued their chase along the route of the South Side Railroad. Unable to feed or reinforce his exhausted army, Lee was forced to surrender on April 9, 1865, at Appomattox Court House.