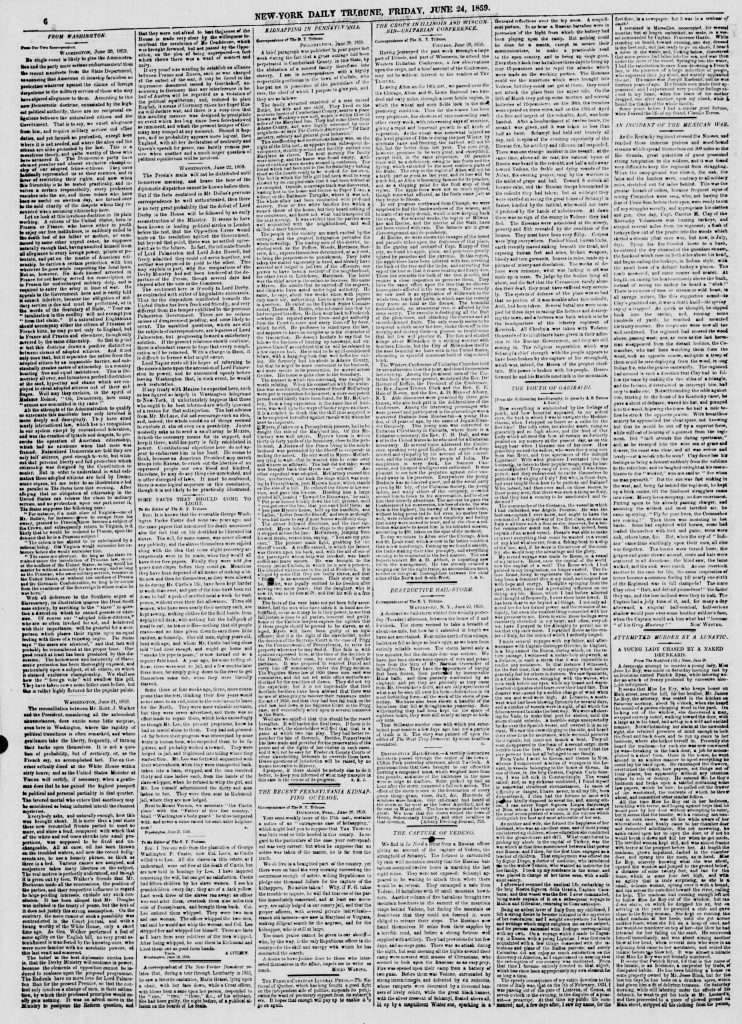 SOME FACTS THAT SHOULD COME TO LIGHT.

To the Editor of The N. Y. Tribune.

Sir: It is known that the venerable George Washington Parke Custis died some two years ago; and the same papers that announced his death announced also the fact that on his deathbed he liberated his slaves. The will, for some reason, was never allowed any publicity, and the slaves themselves were cajoled along with the idea that some slight necessary arrangements were to be made, when they would all have their free papers. Finally they were told five years must elapse before they could go. Meantime they have been deprived of all means of making a little now and then for themselves, as they were allowed to do during Mr. Custis’s life, have been kept harder at work than ever, and part of the time have been cut down to half a peck of unsifted meal a week for each person, without even their fish allowance. Three old women, who have seen nearly their century each, are kept sewing, making clothes for the field hands, from daylight till dark, with nothing but the half-peck of meal to eat; no tea or coffee—nothing that old people crave—and no time given them to earn these little rarities, as formerly. One old man, eighty years old, bent with age, and whom Mr. Custis had long since told “had done enough, and might go home and “smoke his pipe in peace,” is now turned out as a regular field hand. A year ago, for some trifling offense, three were sent to jail, and a few months later three more, for simply going down to the river to get themselves some fish, when they were literally starved.

Some three or four weeks ago, three, more courageous than the rest, thinking their five years would never come to an end, came to the conclusion to leave for the North. They were most valuable servants, but they were never advertised, and there was no effort made to regain them, which looks exceedingly as though Mr. Lee, the present proprietor, knew he had no lawful claim to them. They had not proceeded far before their progress was intercepted by some brute in human form, who suspected them to be fugitives, and probably wished a reward. They were lodged in jail, and frightened into telling where they started from. Mr. Lee was forthwith acquainted with their whereabouts, when they were transported back, taken into a barn, stripped, and the men received thirty and nine lashes each, from the hands of the slave-whipper, when he refused to whip the girl, and Mr. Lee himself administered the thirty and nine lashes to her. They were then sent to Richmond jail, where they are now lodged.

Next to Mount Vernon, we associate “the Custis place” with the “Father of this free country.” Shall “Washington’s body guard” be thus tampered with, and never a voice raised for such utter helplessness?