The hero of The Slave Ship is David Scott, “a stark, tall Scot with a glint of the Captain about him.” At the Battle of Culloden on April 16, 1746, Scott—a Jacobite, or supporter of the Stuart claim to the British throne—is captured and sold into servitude. He arrives in Virginia to find a “low, strange country” and many enslaved Africans, whom he views as kindred spirits. Sold by his first owner, Colonel Amory, Scott escapes from his second, Daniel Askew, and is taken to Norfolk on the Janet, a slave ship under contract to the Royal African Company and captained by a fellow Scot, William Bartram. At first Scott is wary of joining such an enterprise, but Bartram reassures him: “D’ye know what I am called [in Africa]? ‘Holy Bartram!’ And that because the crew that sails with me and the blacks I carry are not ill-treated. Just as far as my power goes they are well treated, and that’s more, man, I grant, than can be said for all slave ships and captains.”

Scott struggles against alcoholism and his own conscience, but remains with Bartram for several years and at least five voyages. He eventually quits to manage a sugar estate in Jamaica, and there meets an antislavery Quaker who speaks to his own doubts about the trade’s morality. The next year, however, Scott returns to the Janet, only to suffer through an outbreak of disease on the return trip from Africa. Much of the crew dies, including Captain Bartram and his first mate, leaving Scott to assume command.

Johnston describes in detail the conditions of enslaved Africans aboard the Janet. Having been captured in wars or by raiding parties, they were sold by Africans to the English and stowed for the Middle Passage in the ship’s lower deck, where they “lay as close as herrings in a cask.” The transatlantic journey took one to three months, depending on the wind and weather conditions. Describing the hold as “fetid beyond believing,” Scott, who narrates the novel, observes how steam from the Africans’ breath floats up through the gratings “as a cloud surrounding the ship.” Some of the Africans resist their captivity, and in one instance are aided in a bloody insurrection by a black mistress whom Scott himself brings onboard. Others resist by refusing to eat or by jumping overboard. Johnston emphasizes, however, that “there is something in the Negro ineradicably cheerful,” and although the crew enforces firm discipline, Scott insists: “We were not demons. We were perplexed and erring men, calloused by this work.”

After plague decimates both the crew and their human cargo, Captain Scott—hoping to live up to the reputation of the departed “Holy Bartram” and worried his skeleton crew will not be able to keep order—earnestly explains to the Africans onboard that their lives in Jamaica will be tolerable: “You will work to make sugar and rum and tobacco, or to cut down trees. If you will not work or if you run away, you will have hard treatment. If you work and stay where you are and make no trouble you will be treated differently. Some of you will be treated very kindly.”

Scott remains with the Janet only briefly before using his inheritance from Bartram to purchase freedom for a number of slaves. He then vows to devote his life to the nascent abolitionist movement, but before he can make good, he is recaptured by his former owner, Colonel Amory. Facing perhaps seven years of indentured servitude, Scott reflects on the idea that both white man and black, master and slave, are all trapped in one mighty chain: “It held us all, though some it appeared to gall less than others. Degrees of harshness and various masters, but all, all, all, possessors and possessed, in slavery!” 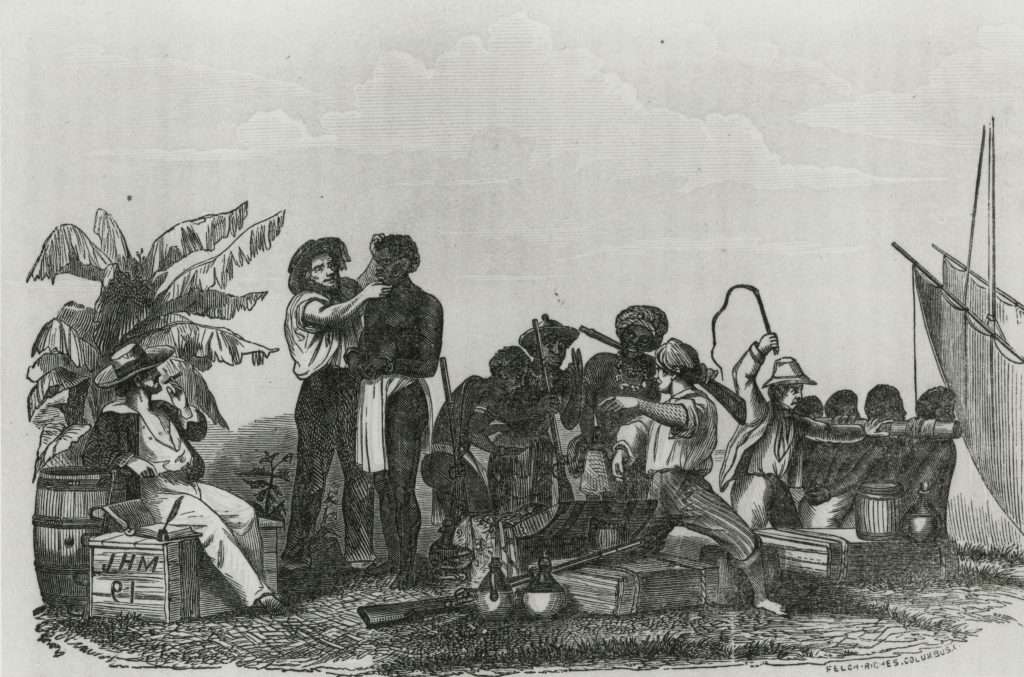 appears to have drawn on a wealth of research regarding the Atlantic slave trade. Johnston depicts the various stations of the trade, including the purchase of captives from European and African dealers in Africa, the preparations of the ship for its human cargo, and the logistical challenge of loading so many potentially resistant people on board. Johnston also acknowledges the discomforts and dangers faced by Africans, from extreme overcrowding to life-threatening disease, and demonstrates their various acts of resistance, from suicide to insurrection. Much more than in her first novel, Prisoners of Hope (1898), Johnston depicts Africans as human beings. Nevertheless, in The Slave Ship she understates the horrors those Africans faced on the Middle Passage.

Johnston portrays the ship’s captain and crew as being concerned for the well-being of the African slaves, out of both economic self-interest and a sense of justice. “Every interest led to kindness with firmness,” David Scott observes, because “the owners [were] served by carrying their goods undamaged.” Even so, “Bartram strove for justice. And when he could—or thought he could—he showed much kindness.” While a captain such as “Holy Bartram” was not unheard of in the slave trade, historical evidence suggests that such a person was exceedingly rare.

A more typical situation was described by the anonymous author of Liverpool and Slavery: An Historical Account of the Liverpool-African Slave Trade by a Genuine “Dicky Sam” (1884): “The captain bullies the men, the men torture the slaves, the slaves’ hearts are breaking with despair.” One crewman, James Field Stanfield, observed much the same thing. In The Guinea Voyage, A Poem in Three Books (1789), he wrote that the Middle Passage “was but one continued scene of barbarity, unremitting labour, mortality, and disease. Flogging, as in the outward passage, was a principal amusement in this.” In fact, according to historian Marcus Rediker in The Slave Ship: A Human History (2007), “Maintaining proper discipline was the crux of the whole enterprise,” which led captains to treat violently both their crews and their human cargoes. (Not only Africans committed suicide on slave ships.)

Many captains used exemplary violence as an important disciplinary tactic, but Johnston never describes Bartram behaving violently toward his own crew. Even when his men put down an insurrection, Bartram declines the opportunity to additionally punish the slaves. “Bartram was not sanguinary,” Scott explains, “nor loved in any way immoderation.” The real-life slave-ship captain William Snelgrave pursued a different approach. He not only executed a man suspected of aiding a shipboard rebellion, but he also cut off the man’s head in full view of the other Africans. Snelgrave did this not only as a warning to other would-be resisters, but also “to let our Negroes see that all who offended thus, should be served in the same manner,” Snelgrave wrote in A New Account of Some Parts of Guinea and the Slave-Trade (1734). “For many of the Blacks believe, that if they are put to death and not dismembered, they shall return again to their own Country, after they are thrown overboard.” In The Slave Ship: A Human History, Rediker responds to this anecdote: “To the many roles played by the slave-ship captain in the burgeoning capitalist economy of the Atlantic must be added another: terrorist.”

In her novel, Johnston raises the specter of the sexual abuse of female captives only to dismiss it. “Between Africa and America, on the broad blue sea, by written and unwritten law, the women of the cargo were cargo only,” her character David Scott states. Yet the famed slave-ship captain John Newton, who later became a minister and composed the hymn “Amazing Grace,” found such restraint “far from being general.” He testified that “in some ships, perhaps in the most, the license in this particular was almost unlimited.” Captains and their officers especially had unfettered sexual access to female slaves, even keeping “wives” in their cabins.

Finally, in Johnston’s novel the enslaved Africans, upon arriving at Kingston, Jamaica, are unloaded onto the dock for sale. “They left the Janet without seeming reluctance,” Scott observes. This initial sale—which often took place onboard ship—was called a “scramble” and was described by a number of real-life participants as deliberately terrifying. Many Africans believed that their captors intended to eat them, which during one scramble caused forty or fifty captives to leap into the ocean and drown themselves. Stanfield, in his long poem, describes a similar incident (“Yon rushing group plunge headlong in the deep!”) and also suggests that the breaking up of families, friends, and loved ones by sale to separate owners accounted for much of that moment’s horror.

Literary critics received The Slave Ship with praise. A review in the New York Times, published on November 16, 1924, deemed the novel “startlingly beautiful” and noted Johnston’s “superb sense of atmosphere”: “The reader hears the sighing and the moans and wails, the childlike songs and chants and throbbing of tom-toms, and sees the dances and the misery in the eyes and bent broad backs.” The reviewer worried, however, that Johnston’s characters tend to personify “qualities and faculties, tendencies and ethical positions, somewhat in the mode of the naïve medieval morality plays.” As such, the slave ship becomes a symbol rather than a vessel of actual horror.

An untitled review in the Independent magazine, published on November 22, 1924, found Johnston’s novel to be “of more gravity and power than any of her previous works.” Its themes are “stark” and “somber” but “handled gravely and without sentimentality.” The historical details, meanwhile, “are well and thoroughly portrayed.” The field of African American history was only in its beginning stages in 1924—Carter G. Woodson‘s The Negro in Our History had only been published two years prior—a fact that may help explain the Los Angeles Times‘s fascination with the historical content of Johnston’s novel rather than its literary worth. In an article titled “Regulations Concerning Slave Trade in Eighteenth Century Made by Parliament,” published on February 8, 1925, the Times recounted a brief history of the trade and praised the thoroughness with which Johnston portrays “almost every phase of the collection, shipping and distribution of slaves.”