Sherwood was born in Virginia around 1660 to carpenter John White and his wife, Susan White. Around 1680, when Grace married farmer James Sherwood, her father gave his new son-in-law fifty acres of land. After White’s death in 1681, James Sherwood received the remainder of his estate. The Sherwoods had three sons—John, James, and Richard—and lived in Pungo, a community in Lower Norfolk County (Princess Anne County after 1691). Little else is known about Sherwood’s life before 1698, when she and her husband sued neighbors John and Jane Gisburne and Anthony and Elizabeth Barnes for defamation and slander. The Sherwoods alleged that the Gisburnes had claimed Grace had “bewitched their piggs to death and bewitched their Cotton.” Elizabeth Barnes testified that “the said Grace came to her one night and rid [rode] her and went out of the key hole or crack of the door like a black Catt.” The Sherwoods lost both cases. 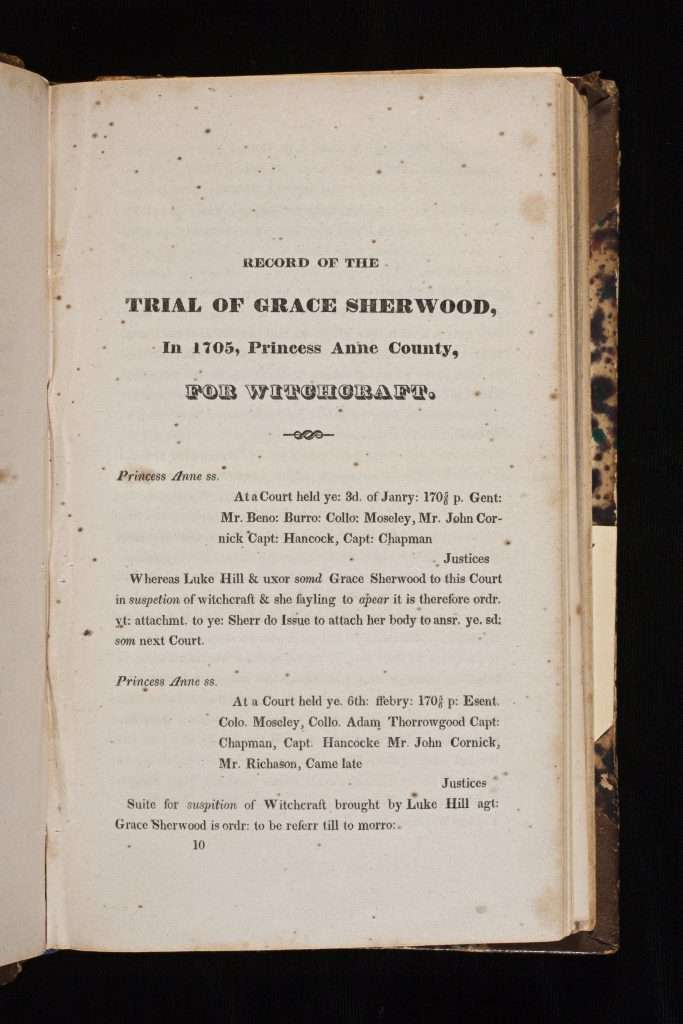 In 1701, James Sherwood died; Grace never remarried. In 1705, she sued Luke and Elizabeth Hill for assault and battery and won twenty pounds sterling in damages. Early the next year, Luke Hill and his wife charged Sherwood with witchcraft, a criminal offense. Sherwood’s trial was delayed time and again; finally, the court impaneled a jury of women to search Grace for witch’s marks—spots where a witch might suckle her familiar, an animal-like demon given to her by the devil. The women found two such marks, but still the case did not go to trial. County justices attempted to forward the case to a higher court, but it was returned. After an investigation of Sherwood’s home, county justices ordered her “to be tried in the water by ducking.”

The so-called water test, which had been considered so controversial that it was no longer used in European courts at the time of Sherwood’s trial, involved binding the accused’s hands and feet and throwing him or her into a body of water. A defendant who sank was presumed innocent, because the water—a pure element—had accepted him or her; a defendant who floated was presumed guilty. In Sherwood’s case, the justices took several precautions to ensure her safety: they only administered the test after Sherwood herself had agreed to it, and the test was postponed from its original date because the weather had been “very Rainy & Bad soe yt possibly it might endanger her health.”

When the test was finally administered in a branch of the Lynnhaven River on July 10, 1706, Sherwood floated. Once she was ashore, a special women’s jury searched her again “for all teats Spotts & marks about her body not usuall on others.” These women found two black marks on Sherwood’s body, and as a result she was convicted as a witch and ordered to jail to await another trial. What happened next is uncertain; no records of a second trial exist. Sherwood appeared before the county court in 1708 to pay a debt, and in 1714, she petitioned the secretary of the colony for reinstatement of her land, so most scholars assume that by this time she had been released from prison. Her request for reinstatement was granted, and she lived the remainder of her life on her 144-acre farm. Sherwood’s will was proved in 1740, which is likely the year of her death.

Because few facts are known about Grace Sherwood’s life, her story has been expanded upon where there is no historical record. As late as 1883, some historians believed that Sherwood was the only woman accused of witchcraft in Virginia, which contributed to her fame. In 1869, writer W. C. Elam asserted that Sherwood was a “negress,” and thus the charges against her were evidence of racial and religious intolerance in the early South. In 1973, Louisa Venable Kyle increased popular interest in the Sherwood’s story when she published the children’s book The Witch of Pungo. Sherwood is often portrayed as a healer, familiar with herbs and friendly to animals. She has also been described as wearing male clothing, or as being so beautiful that she attracted the attention of men in the community, angering their wives. The historical record, however, does not support these descriptions.

Sherwood has become a local legend in Virginia Beach, where she is popularly known as the “Witch of Pungo” and the “Virginia Witch.” Several landmarks in the Virginia Beach area are named for her water trial, including Witchduck Road and Witchduck Point, where the trial allegedly took place. In Pungo, “the Witch” is an honorary official of the town’s annual strawberry festival. A reenactment of Sherwood’s trial is also part of the programming at Colonial Williamsburg.

On July 10, 2006, exactly 300 years after her trial by water, Virginia governor Timothy Kaine pardoned Sherwood. Virginia Beach mayor Meyera E. Oberndorf read the pardon aloud during an annual reenactment of the trial at the Ferry Plantation House. Oberndorf also declared July 10 to be celebrated as Grace Sherwood Day. The following year, a statue of Sherwood was unveiled in Virginia Beach.

RELATED CONTENT
Related Primary Documents:
Categories:
Type:
MAP
TIMELINE
ca. 1660
Grace White is born to John White, a carpenter, and his wife, Susan. Though the exact location of her birth is unknown, it is likely in the Virginia Beach area.
ca. 1680
Grace White marries James Sherwood, a farmer. They will have three sons: John, James, and Richard. John White, Grace's father, gives his son-in-law fifty acres of land.
May 11, 1681
The will of John White, father of Grace Sherwood, is proved. White leaves all of his land to his son-in-law James Sherwood.
1698
James and Grace Sherwood sue John and Jane Gisburne and Anthony and Elizabeth Barnes for defamation and slander. The Sherwoods allege that both couples accused Grace Sherwood of practicing witchcraft.
September 1701
By this time, James Sherwood has died. His wife, Grace, never remarries.
December 12, 1705
Grace Sherwood sues Luke and Elizabeth Hill for assault and battery. Sherwood wins the case and is awarded twenty pounds sterling.
January 1706
Luke Hill formally charges Grace Sherwood with witchcraft.
March 1706
In response to Luke Hill's charge of witchcraft against Grace Sherwood, the Princess Anne County Court impanels a jury of women, including Elizabeth Barnes, to search Sherwood's body for witch's marks. The jury finds two marks, and Sherwood is ordered to jail to await trial.
July 10, 1706
Grace Sherwood undergoes a water test to determine whether she is guilty of the charge of witchcraft. Sherwood floats, indicating her guilt, and once ashore is examined for witch's marks. A jury of women finds two marks. Sherwood is imprisoned and ordered to undergo another trial. It is unclear whether the second trial ever occurred.
September 1, 1708
Grace Sherwood pays a debt of 600 pounds of tobacco to another colonist.
1714
Grace Sherwood petitions the secretary of the colony for restoration of her property to her. He grants her the 144 acres that the Sherwoods inherited from Grace's father, John White, in 1681.
October 1, 1740
Grace Sherwood's will is proved. Her son John Sherwood is the executor of her will and inherits most of her land and her belongings.
1973
Louisa Venable Kyle publishes a children's book, The Witch of Pungo. Her short story of the same name revives Grace Sherwood's popularity in southeastern Virginia.
July 10, 2006
Three hundred years after Grace Sherwood was found guilty of witchcraft by water trial, Governor Timothy Kaine pardons her. During an annual reenactment of Sherwood's trial, Virginia Beach mayor Meyera E. Oberndorf declares July 10 to be celebrated henceforth as Grace Sherwood Day.
2007
A bronze statue of Grace Sherwood, sculpted by Robert G. Cunningham, is placed in front of Sentara Bayside Hospital in Virginia Beach.
FURTHER READING
CITE THIS ENTRY