The area of the park was first inhabited by Paleo-Indians, perhaps more than 12,000 years ago. By the time of the European settlement at Jamestown, Siouan-speaking Indians had populated the eastern slopes of the Blue Ridge while Iroquoian-speaking Indians had been in the Great Valley to the west. In 1669, John Lederer, a German explorer, may have been the first white man to visit the Blue Ridge. Virginia governor Alexander Spotswood promoted expansion into the region when his “Knights of the Golden Horseshoe” expedition crossed into the Valley in 1716. German and Scots-Irish families from Pennsylvania soon followed.

With settlement came farming, gristmills, lumbering, iron furnaces, and eventually the railroad. The “mountain people” who inhabited the Blue Ridge were largely subsistence farmers with some livestock who did part-time work in local gristmills and sawmills. They hunted, created crafts, and produced a little moonshine. By early in the twentieth century, much of the original forest had been cut down, leaving open land and scrub forest. About 500 families were living in the proposed park area at the time of its creation.

Origins of the Park 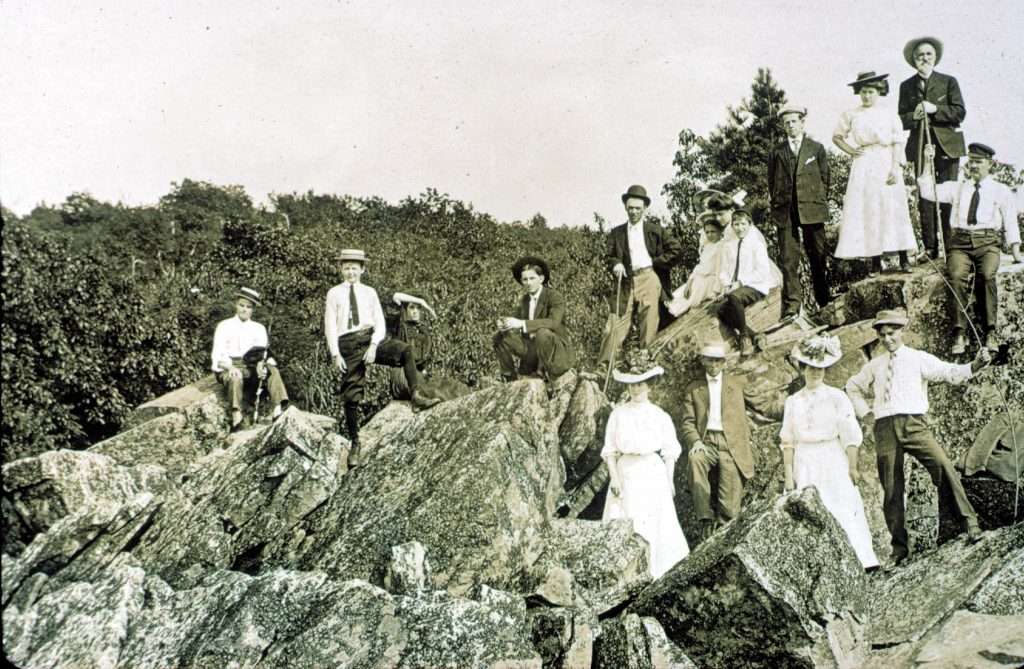 Visitors to Future Site of the Shenandoah National Park

The National Park Service began a search for a park in the Southern Appalachians in 1924 to provide greater access for people in the major population centers on the East Coast who had limited access to the great parks of the western United States. Such a park near Washington, D.C., might also impress congressmen who had to vote funds for the national parks. The Southern Appalachian National Park Committee was formed to consider sites.

Informed by a friend about the search for such a park, George Freeman Pollock, the owner of Skyland, a rustic mountain resort on Stony Man Mountain, leaped at the opportunity to save his treasured property for posterity. He was joined by L. Ferdinand Zerkel, a Luray real-estate salesman, who represented a local business group interested in developing the area’s commercial opportunities. In site competition with the Great Smokies of North Carolina and Tennessee, Virginians championed the possibility of a scenic road—a “skyline drive along the mountain top”—to increase support for Virginia’s bid. Pollock and Zerkel enlisted Governor and state senator Harry F. Byrd Sr., then running for governor, in their effort and lobbied Washington on behalf of the Skyland site. To impress the selectors further, Virginians established the Shenandoah National Park Association to raise $2.5 million for the land purchases required by the federal government. A nascent Appalachian Trail movement avidly supported the Shenandoah location; eventually, the trail would wind from one end of the park to the other.

The Park and Harry Byrd

Relocation of Shenandoah Residents
From the day of his inauguration as governor to the opening of Shenandoah National Park ten years later, Harry Byrd was actively involved in its establishment. His concern for conservation derived primarily from its connection to state economic development; he favored conserving resources to attract outside industry and tourists. His establishment of the aptly named Commission on Conservation and Development, as well as his vigorous efforts to recruit new industry by making trips to New York and writing articles, speeches, and letters to potential newcomers, attest to this. But Byrd, much like Pollock, also had a genuine love for the land. He enjoyed hiking and hunting, especially in the Blue Ridge Mountains and the Shenandoah Valley. He had sold his father’s cabin at the Skyland resort near Luray in 1921, but his fondness for the place certainly made him an enthusiastic backer of a national park in the area. Years later, Byrd would personally pay for the construction of several shelters in the park.

When fund-raising for land purchases slowed, Byrd assumed the chairmanship of a statewide effort that raised a reduced $1.25 million within a month’s time. In April 1926 the park commission recommended creation of both the Shenandoah and Great Smoky Mountains national parks, and U.S. president Calvin Coolidge signed the implementing legislation on May 22, 1926. The original size of Shenandoah was expected to be 521,000 acres. 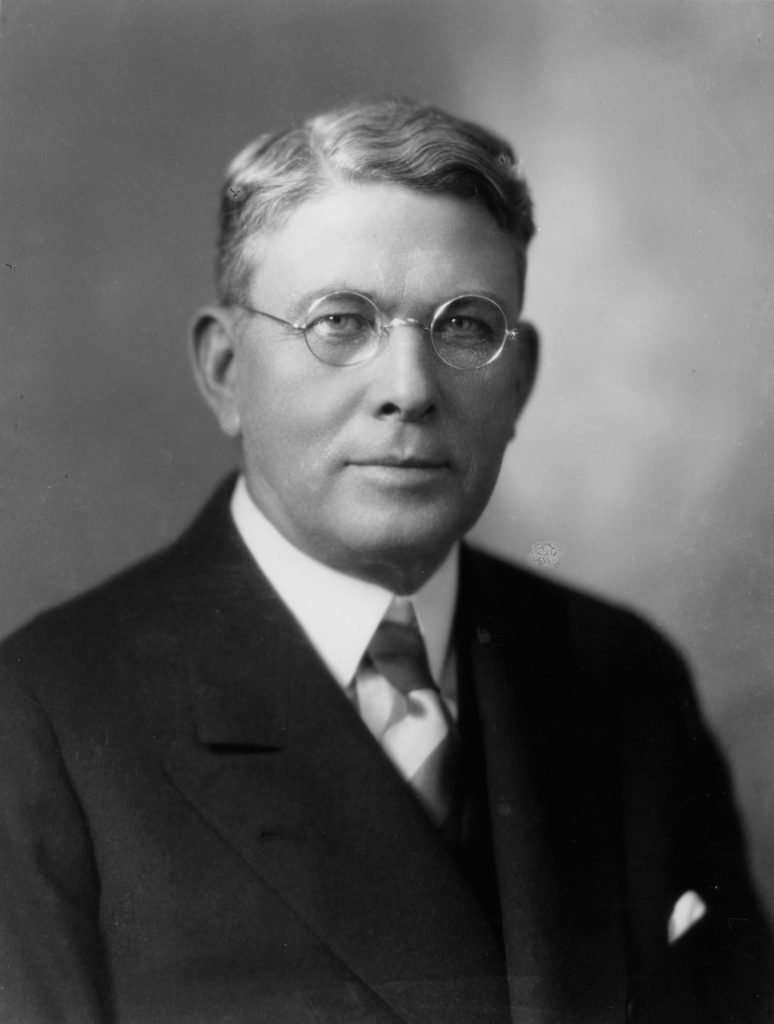 But all was not smooth sailing. As the collection of pledges lagged, Byrd directed William E. Carson, chairman of the Commission on Conservation and Development, to assume the tasks of pledge collection and land acquisition. Seeing an opportunity to dramatize the work of the commission, Carson energetically carried out his new charge. By the spring of 1927 he had collected about half of the pledges, but he also discovered that land prices far exceeded earlier estimates. The cost of the land would be $6 million, not $2 million, and much of the land was not suitable for a park. It was too heavily populated and land titles were unclear. Some people did not even own the land they lived on. The governor, who had feared this predicament, lobbied with Department of Interior officials and won a reduction in the size of the park. He also asked the 1928 General Assembly for a $1 million appropriation for the park to supplement private contributions. Approving the money, the legislature passed an additional bill making it easier to condemn the land prior to completing the park so to avoid subsequent litigation.

To increase public support for the project, Carson approached U.S. president Herbert Hoover, an avid fisherman, about creating a campsite in the vicinity for the president’s personal use. A site on the Rapidan River was selected. Hoover paid for the cost of the camp out of his own pocket, but every time he fished there Virginia and the nearby park received favorable publicity. Although the arrival of the Great Depression precluded additional federal funding for the park, Carson successfully lobbied the president and Congress to use federal funds on roads in and near the park, including the Skyline Drive, and to hire unemployed workers. A portion of the drive was opened in 1934 and it was completed in 1939.

President Roosevelt Visits CCC at Shenandoah
Controversy between Carson and Byrd over an early opening of the road and compensation for Carson’s brother, Judge A. C. Carson, who had handled much of the legal work over land claims, plagued completion of the projects and soured their relationship. Removal of the park residents, 40 percent of whom owned their land, was another divisive question. Four hundred sixty-five families, about 2,200 people, were living there when the park deeds were conveyed to Washington. Would all residents have to leave the park or just those in the areas to be developed? National Park and Interior Department administrators decided that all would have to go, raising an issue that remained contentious for years.

Virginia politicians and people in the surrounding area, who favored a more modest removal, were critical of the federal government’s decision. Those removed were of different minds about leaving. Some bitterly but unsuccessfully fought the removal in the courts, while others looked forward to a new beginning. The government built seven subsistence homestead communities outside the park boundary for many families, whose quality of life was significantly improved. A few people, the last of whom died in 1979, were given lifetime leases. Cemeteries in the park were left as they were. 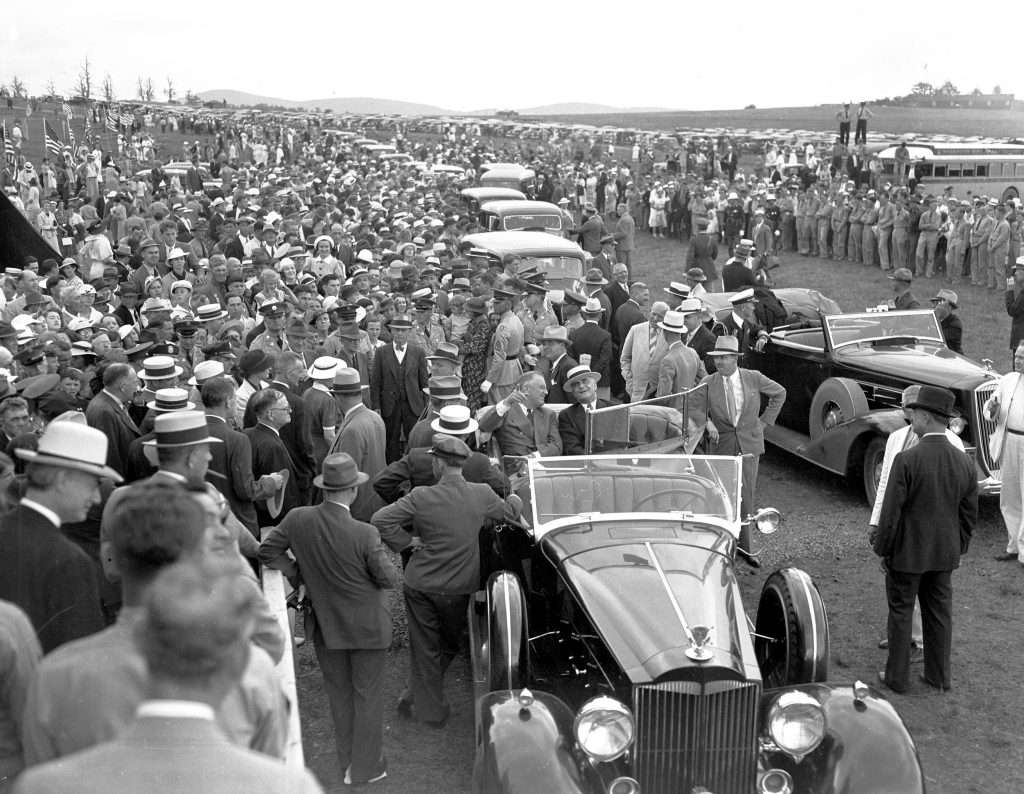 Completion of the park, which was eventually reduced in size to 160,000 acres—a “shoestring” four miles wide and seventy-seven miles long—awaited the administration of U.S. president Franklin Roosevelt, who was an enthusiastic supporter of the park and the Skyline Drive. His Civilian Conservation Corps established six camps in the park area whose workers constructed roads, improved forest landscaping and wildlife conditions, and fought fires. Roosevelt also agreed to an extension of the drive southward, linking up the Shenandoah and Great Smoky Mountains national parks with a road that eventually became the Blue Ridge Parkway. The president dedicated the park on July 3, 1936. Its existence owes much to the vision and diligence of men like George Pollock, Will Carson, and Harry Byrd.

Today Shenandoah National Park is one of the most popular parks in the country. Having grown to about 200,000 acres, it is a “recycled” park; the land has been reclaimed from its overused original condition so that much of it is considered wilderness. Today’s forest, consisting mostly of oaks and hickories, is less than one hundred years old. Within the park are sixty peaks more than 3,000 feet above sea level, the highest being Hawksbill Mountain at 4,051 feet, seventy-five overlooks, more than 500 miles of trails, and 654 campsites. The park faces serious problems of air pollution that has lessened visibility and the infestation of gypsy moths that has defoliated the trees.

EXTERNAL LINKS
RELATED CONTENT
Related Entries:
Categories:
MAP
TIMELINE
1607
By the time of the European settlement at Jamestown, Siouan-speaking Indians populate the eastern slopes of the Blue Ridge Mountains while Iroquoian-speaking Indians reside in the Great Valley to the west.
1669
John Lederer, a German explorer, may be the first white man to visit the Blue Ridge Mountains.
1716
Lieutenant Governor Alexander Spotswood promotes expansion into the Blue Ridge Mountains when his "Knights of the Golden Horseshoe" expedition crosses into the Shenandoah Valley. He and a party of about fifty gentlemen, possibly including William Dandridge, embark on the expedition; German and Scots-Irish families from Pennsylvania soon follow.
1924
The National Park Service begins a search for a park in the Southern Appalachians to provide greater access for people in the major population centers on the East Coast. The Southern Appalachian National Park Committee is formed to consider sites.
May 22, 1926
President Calvin Coolidge signs the legislation implementing Shenandoah National Park. The original size of Shenandoah is expected to be 521,000 acres.
1934
A portion of the Skyline Drive in Shenandoah National Park is opened after William E. Carson successfully lobbies President Franklin Roosevelt and the U.S. Congress to use federal funds on roads in and near the park, including the "skyline drive along the mountain top."
July 3, 1936
President Franklin Roosevelt dedicates the opening of 166,000-acre Shenandoah National Park, but not before about 2,200 park residents are removed from their homes.
1939
The construction of the Skyline Drive in Shenandoah National Park is completed.
FURTHER READING
CITE THIS ENTRY