Seaton was born free early in the 1820s in Alexandria, a part of the District of Columbia until 1847. His parents were Lucinda Seaton, who had been enslaved at Mount Vernon before she was emancipated, and George Seaton, who was also free. On July 30, 1841, Seaton registered as a free person of color along with his brothers and sisters in Alexandria, with the registry listing him as “about 19 years” old. He learned to read and write and also trained as a carpenter. On October 6, 1845, he took out a marriage bond and on that date or soon thereafter married Maria Louisa Bryant, a free woman of color. They had at least five sons and four daughters. 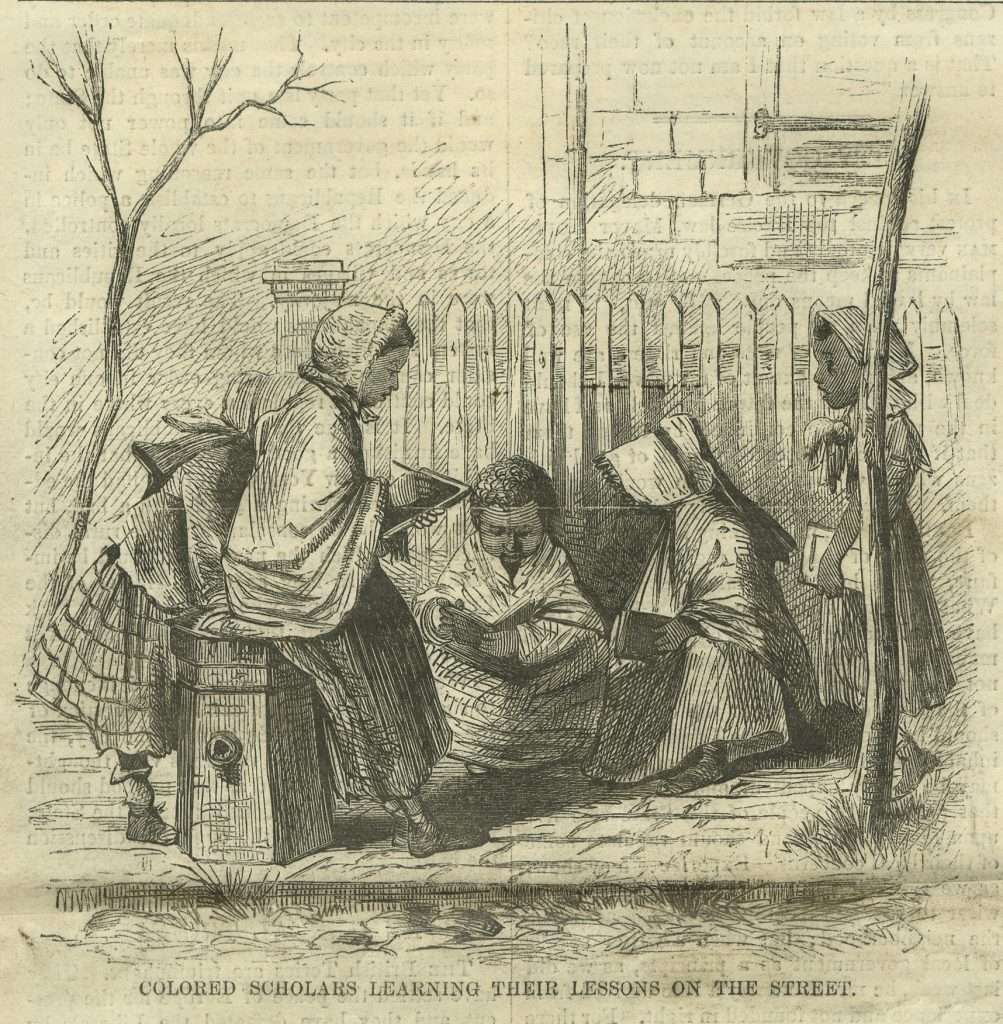 Colored Scholars Learning Their Lessons on the Street

In 1844 Seaton purchased a lot on Washington Street and inherited another when his father died later that year. He continued to buy and sell lots in Alexandria, and at the time of the 1860 census his real estate property was valued at $1,000. His activities during the Civil War are unknown, but in October 1866 he contracted with the Bureau for Refugees, Freedmen, and Abandoned Lands to construct a school for freedpeople. In April 1867 his name was included on a list of nine reliable African Americans compiled by the local Freedmen’s Bureau agent, who two months later described Seaton as “very much interested in the welfare of the colored people here.” In June Seaton received a contract to construct a second school and to provide 200 desks and eight tables for each. He was a trustee of the First Free School Society of Alexandria, which raised about $1,600 in the African American community to purchase the two lots where the new schools were constructed.

Seaton’s reputation was likely a factor in his being one of six African American men appointed by Judge John C. Underwood to the grand jury for the U.S. Circuit Court for the District of Virginia. Sworn in on May 6, 1867, the members of what was likely the first interracial jury in Virginia sat during several sessions of the term that lasted until November and were present when Jefferson Davis appeared in court and was served the writ on his May 1866 indictment for treason. Seaton and the grand jury indicted several other Confederate officials for high treason and issued true bills in other cases, including the possession and passing of counterfeit currency. At the court’s next term, Seaton was among almost thirty African Americans named veniremen for the petit jury, but whether he sat on a jury then is not known.

In 1867 Congress passed the Reconstruction Acts, which placed the former Confederate states under martial law and required each to hold a convention and write a new constitution. Seaton attended a called meeting of the Republican Party in Richmond on April 17–18, 1867. Three hundred Republicans, most of them African Americans, adopted resolutions calling for equal political and legal rights, a system of free schools, and the adoption of a fairer system of taxation. He was also a delegate to a subsequent convention in August.

Seaton belonged to Alexandria’s Fourth Ward Radical Club, of which he was elected president in January 1868. Infighting among the city’s Republicans led to the nomination in June 1869 of two tickets for seats in the General Assembly. At the election, held on July 6, 1869, voters ratified the new state constitution and elected members of the assembly. Seaton was elected to one of Alexandria’s two seats in the House of Delegates, receiving 1,807 votes of about 3,500 cast.

At a short session that met in October, Seaton voted to ratify the Fourteenth and Fifteenth amendments to the U.S. Constitution as required by Congress before Virginia could be readmitted to the United States. During the two sessions that met in 1870 and in 1870–1871, Seaton sat on the Committee of Schools and Colleges and on the Committee on Banks, Currency and Commerce. In 1870 the General Assembly approved a bill creating the state’s first public school system. Fighting to secure their equal rights of citizenship, Seaton and most of the African American delegates had attempted to strike out the requirement that schools be racially segregated. After their measure was overwhelmingly defeated, he joined other bold legislators in casting a symbolic vote against passage of the school bill that he almost certainly favored.

On February 7, 1871, he proposed an unsuccessful amendment to allow the city of Alexandria’s new charter to be submitted to the voters for ratification. Ten days later he presented a resolution regarding the management of the city’s public schools. He was not present in March when the House voted in favor of the Funding Act of 1871, which provided for the payment of Virginia’s antebellum public debt and later had a disastrous effect on the state’s finances.

Republicans in the city and county again disagreed about candidates for the House of Delegates, although Seaton eventually became one of the nominees. He lost his bid for reelection on November 7, 1871, by fewer than 100 votes. He continued to participate in party politics throughout the decade, attending local and state conventions, and was named an alternate delegate to the Republican National Convention in 1872 in Philadelphia. Three years later he declined election to the party’s executive committee in Alexandria.

As a master carpenter Seaton constructed, repaired, and enlarged numerous houses and local structures, including municipal buildings and Odd Fellows Hall (listed on the National Register of Historic Places in 2004). In April 1868 he advocated the Colored Co-Operative Building Association to help African Americans finance the construction of their own homes. In 1872 he chaired a meeting that called for the establishment in the city of a branch of the Freedman’s Savings Bank and Trust Company, and he was later named to its advisory board. Seaton also operated a grocery store on King Street for several years between 1868 and 1875. He experienced financial difficulties after the Panic of 1873 and the collapse of the Freedman’s Savings Bank. His store’s stock was sold off in 1875 and several of his lots were sold at auction in 1879 for delinquent taxes.

Seaton remained a strong supporter of Alexandria’s public schools throughout his life and was a trustee, and sometimes president, of the Colored Public School Building Association until his death. He was a member and deacon of Alfred Street Baptist Church and the founding president in 1873 of a Young Men’s Christian Association chapter for African Americans.

Seaton’s wife died on July 25, 1869, and on March 18, 1874, he married Catherine Turley, in Alexandria. They had two sons and one daughter. Seaton suffered poor health during his final years and died of paralysis at his home on July 5, 1881. He was buried in Alexandria. The George Lewis Seaton House was added to the Virginia Landmarks Register and the National Register of Historic Places in 2003 and 2004, respectively.