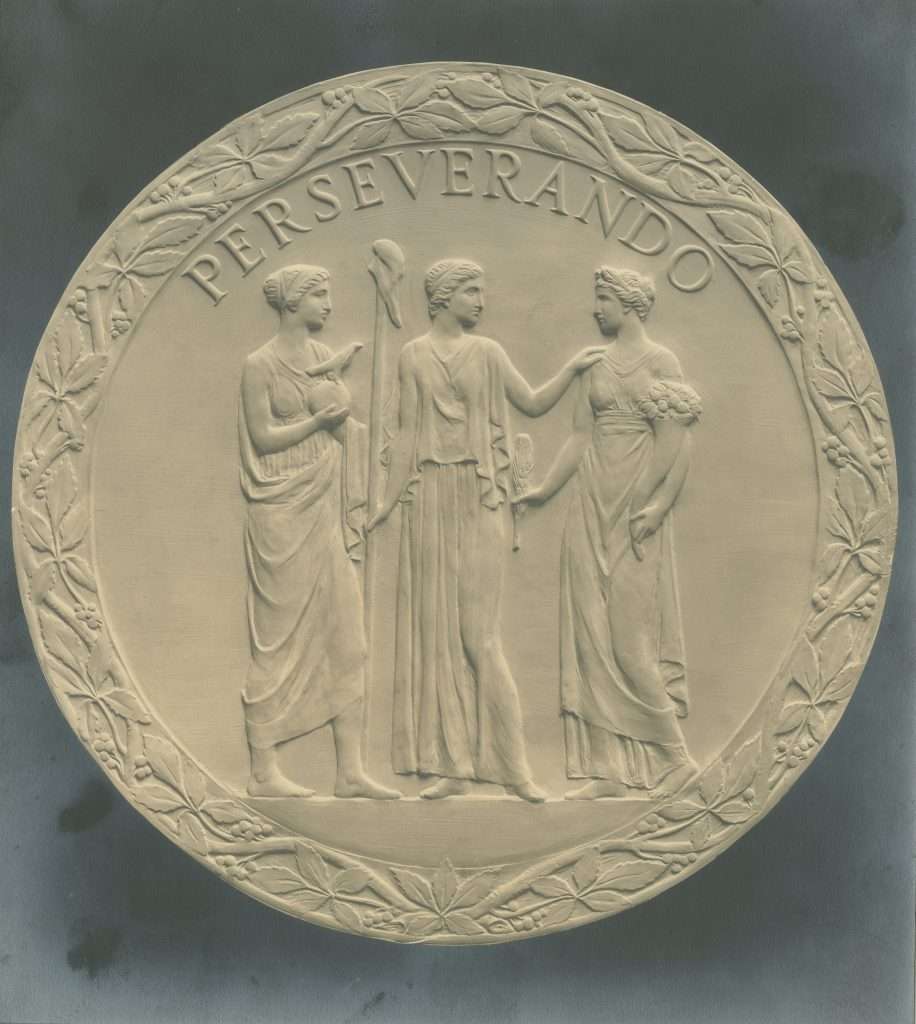 The great seal of the Commonwealth of Virginia is described in detail in § 1–500 of the Code of Virginia. The description has changed very little since it was adopted in July 1776: The great seal of the Commonwealth shall consist of two metallic discs, two and one-fourth inches in diameter, with an ornamental border one fourth of an inch wide, with such words and figures engraved as follows: On the obverse, Virtus, the genius of the Commonwealth, dressed as an Amazon, resting on a spear in her right hand, point downward, touching the earth; and holding in her left hand, a sheathed sword, or parazonium, pointing upward; her head erect and face upturned; her left foot on the form of Tyranny represented by the prostrate body of a man, with his head to her left, his fallen crown nearby, a broken chain in his left hand, and a scourge in his right. Above the group and within the border conforming therewith, shall be the word “Virginia,” and, in the space below, on a curved line, shall be the motto, “Sic Semper Tyrannis.” On the reverse, shall be placed a group consisting of Libertas, holding a wand and pileus in her right hand; on her right, Aeternitas, with a globe and phoenix in her right hand; on the left of Libertas, Ceres, with a cornucopia in her left hand, and an ear of wheat in her right; over this device, in a curved line, the word “Perseverando.”

The use of an official seal to authenticate government documents has its origins in antiquity and was preserved through the centuries when many people could not read or were unable to write. A unique and recognized symbol for the ruler served as the authenticating identification of the official document to which it was affixed. Many individual people also used seals to authenticate their private papers, and business firms also employed seals on their documents.

During the seventeenth and eighteenth centuries, the official seal of the colony of Virginia changed each time a new monarch ascended the throne, except during the years between 1652 and 1660 when Parliament ruled without a king, and it is not known for certain whether colonial officials used a seal at all. Otherwise, each of the colonial seals contained the arms of the reigning king of England (between 1702 and 1714 the arms of Queen Anne) and, until 1707, the words, “En Dat Virginia Quintam” (also spelled “Quintum“), meaning that Virginia was the fifth realm of the Crown. The kings and queens of England at that time also claimed the thrones of Scotland, Ireland, and (since the Norman Conquest) France. Virginia was therefore the fifth of the Crown’s domains. Following the Acts of Union in 1707 that combined the kingdoms of England and Scotland into the kingdom Great Britain, the phrase was changed to “En Dat Virginia Quartam,” Virginia then being the fourth of the Crown’s four realms. 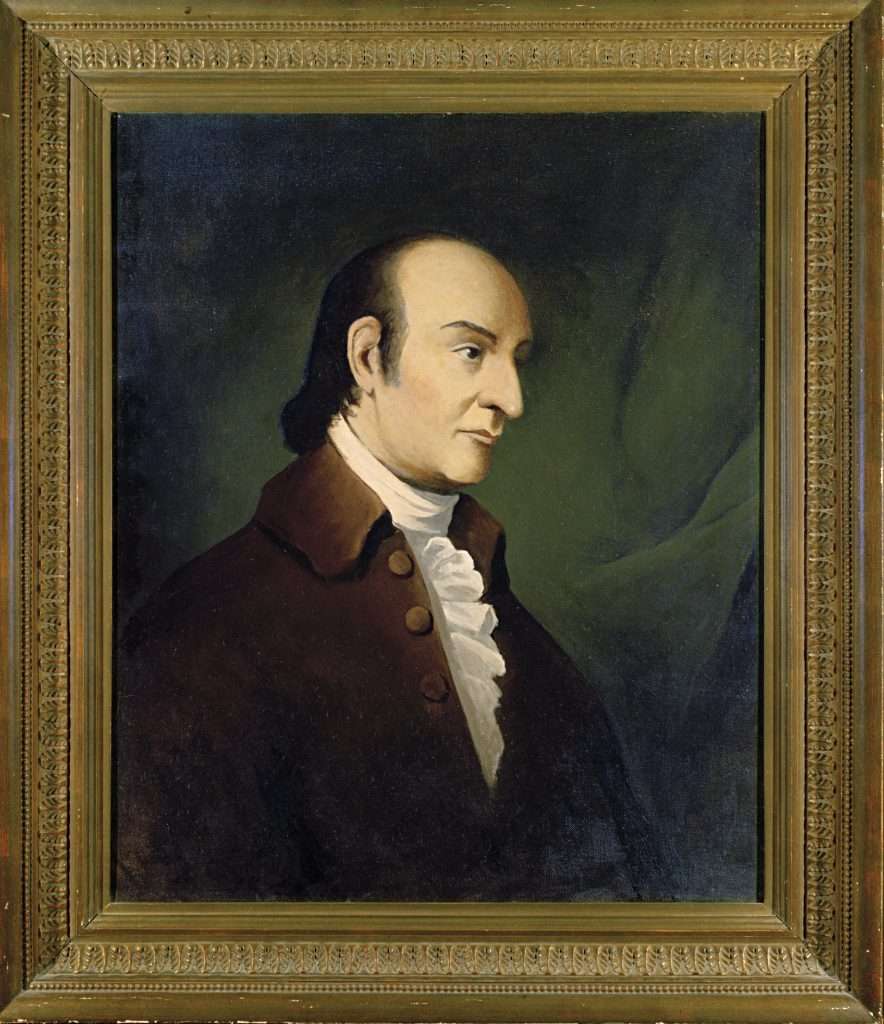 On July 5, 1776, the Virginia Convention—which in the previous two months had instructed the Virginia delegates in Congress to introduce a resolution of independence, ratified the Virginia Declaration of Rights, adopted the first written Constitution of Virginia, and elected Patrick Henry the first governor of the independent Commonwealth of Virginia—also adopted an ordinance to create a new seal. George Wythe designed the seal, for which dies were engraved in Paris. On the front, or obverse, is a figure of Virtus, the Roman goddess of virtue, appearing as “the genius of the commonwealth, dressed like an Amazon resting on a Spear with one hand and holding a Sword in the other and treading on Tyranny represented by a man prostrate a Crown fallen from his Head a broken chain in his left Hand and a Scourge in his right.” In the exergon, or margin, above Virtus is the word “Virginia,” and in the exergon below the figures is what then became the motto of the Commonwealth of Virginia, “Sic Semper Tyrannis,” meaning “thus always to tyrants.” On the back, or reverse, of the seal are three female figures. Libertas, the goddess of liberty, holds a wand and pileus, signifying power. Ceres, the goddess of agriculture, holds in one hand a cornucopia, signifying plenty, and in the other “an ear,” or stalk, of wheat. Aeternitas, representing eternity, holds a globe and phoenix, signifying a rebirth of the earth. In the exergon were to be the words “Deus nobis haec otia fecit” (Latin for “God has given us this ease”), which the General Assembly in 1779 ordered changed to “Perseverando” (“by persevering”).

Since 1779, the great seal has remained substantially unchanged, but the attitudes of the figures were changed in minor ways when old seals wore out and new ones were engraved. Virtus, for instance, has been represented with one or both breasts bare, as the mythical Amazons would have been, or entirely covered. New seals were engraved in 1809 and again in 1856. In the 1856 seal the words “Virginia” and “Perseverando” and the motto Sic Semper Tyrannis first appeared inside the space with the figures, and a floral decorative border was added in the margin, where the words had been. In June 1861, when a convention met in Wheeling to restore Virginia to the Union after a convention in Virginia voted to secede, the new governor that the Wheeling delegates elected, Francis H. Pierpont, ordered that the words “Liberty and Union” be added to both sides of the seal, and he had new seals made including those words. During the Civil War, the government of Virginia that had its capital in Richmond and was one of the Confederate States of America used the 1856 seal, and the government of Virginia that had its capital in Wheeling until June 1863 and in Alexandria from then until May 1865 used the revised, 1861, seal. Following the collapse of the Confederacy and the flight of all of the state officials from Richmond in April 1865, the government in Alexandria moved its capital to Richmond and continued to use the 1861 seal.

An act of assembly adopted in 1873 directed that new copies of the seal, a greater one and a lesser one, be struck and that the words “Liberty and Union” not appear on either side of either seal. In 1903 the General Assembly passed another law concerning the seal, in essentially the same language that the Convention of 1776 had adopted (but incorporating the 1779 replacement of the words “Deus nobis haec otia fecit” with “Perserverando“), and subsequent acts of 1950, 1966, and 2005 continued to describe the seal in the same manner, specifying the sizes of the great and lesser seals, and regulating their use.

The emblem on the obverse of the seal with the motto Sic Semper Tyrannis also appeared early in the nineteenth century on the flag of the Commonwealth of Virginia, although the General Assembly never formally authorized or approved a design for a state flag. The flag was authorized instead by the Virginia Convention of 1861, which adopted an ordinance on April 30 that specified that the design on the obverse of the state seal appear against a background of deep blue and thereafter be the official design for the state flag.

RELATED CONTENT
Categories:
MAP
TIMELINE
July 5, 1776
The Virginia Convention adopts an ordinance to create a new seal for the independent Commonwealth of Virginia.
1779
The General Assembly orders a change made to the state seal. The words "Deus nobis haec otia fecit," Latin for "God has given us this ease," are replaced with "Perseverando," or "by persevering."
1856
The words "Virginia" and "Perseverando" and the motto Sic Semper Tyrannis first appear inside the exergon of the state seal.
April 30, 1861
The Virginia Convention adopts an ordinance specifying that the design on the obverse of the state seal appear against a background of deep blue and thereafter be the official design for the state flag.
June 1861
At the Second Wheeling Convention, Francis Harrison Pierpont, governor of the Restored government of Virginia, orders that the words "Liberty and Union" be added to both sides of the state seal.
1861—1865
Confederate Virginia, with its capital in Richmond, uses the 1856 version of the state seal while the Restored government of Virginia, with its capital in Wheeling and then Alexandria, uses a revised 1861 seal that bears the words "Liberty and Union."
1873
The General Assembly directs that new copies of the state seal be struck, a greater one and a lesser one, and that the words "Liberty and Union" not appear on either side of either seal.
1903
The General Assembly passes another law concerning the state seal, essentially returning it to the language of the Convention of 1776. Subsequent acts of 1950, 1966, and 2005 will continue to describe the seal in the same manner.
FURTHER READING
CITE THIS ENTRY