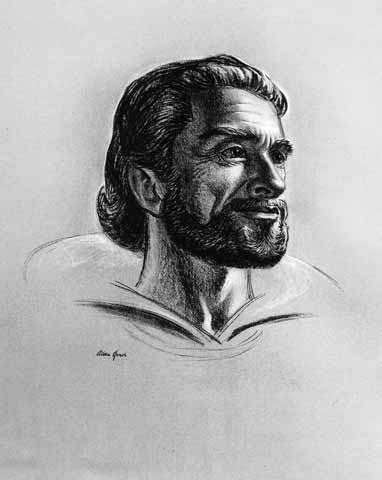 Almost nothing is known of Savage’s life before 1607, when the boy left England on the John and Francis with the so-called First Supply of Jamestown colonists. He arrived in Virginia on January 2, 1608, to work as a laborer, but was soon thrust into a very different role. That February, he accompanied Captain Christopher Newport, Captain John Smith, Matthew Scrivener, and thirty to forty other men on a diplomatic visit to Werowocomoco, the capital of Tsenacomoco. There, Newport presented the paramount chief, Powhatan, with gifts from King James I—and with Savage, whom Smith and Newport led the Indians to believe was Newport’s own son. Powhatan reciprocated by giving Newport his servant, Namontack, and a large bushel of beans.

English and Indian leaders alike seemed to believe that these young men could absorb languages and transcend political and cultural barriers in a way that grown men could—or would—not. Savage and Namontack were just two of a handful of youths who were made to participate in this type of cultural exchange. The motive was twofold: the boys could promote understanding and facilitate trade between cultures in times of peace, but they might also serve as informants in times of war. In his nearly three years with the Indians, Savage learned the Indians’ language (a form of Algonquian), their culture, and their expectations; he also saw Anglo-Indian relations deteriorate beyond repair.

English Interpreters
Savage seems to have been well treated during his time at Werowocomoco: Henry Spelman, another young interpreter, later wrote that he and Savage dined at Powhatan’s “oune Table messe,” and once, after the paramount chief exiled Savage for failing to negotiate the release of Indian captives at Jamestown in 1608, he almost immediately sent his daughter Pocahontas to retrieve the boy, whom she said “he loved exceedingly.” But any goodwill present when the English handed over Savage at Werowocomoco had completely evaporated by the winter of 1609–1610. Following a number of violent confrontations with the English on Indian lands, the Powhatans laid siege to James Fort, exacerbating a famine that would devastate the English colony. By the end of 1610 Savage, likely fearing for his safety, invented an errand in Jamestown and stayed there. After Savage’s escape from Werowocomoco, William Strachey documented a Powhatan war song that mentions Savage, whom they called “Thomas Newport,” by name, indicating their displeasure with him. Nevertheless, his skills as an interpreter placed him in high demand among the English in Virginia.

Career as a Public Interpreter 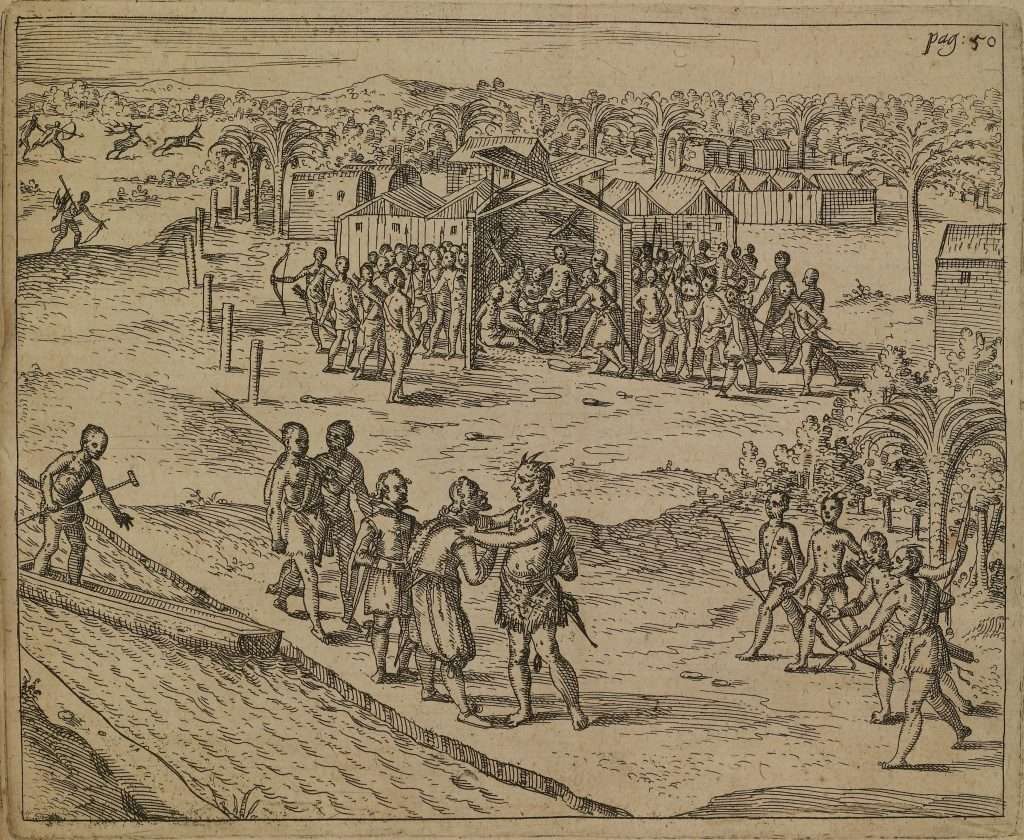 Savage may have been present when Captain Samuel Argall kidnapped Pocahontas in 1613, and he played a critical role in negotiating an end to the fighting between the English and the Pamunkey tribe in March 1614. That May—after the marriage of Pocahontas to John Rolfe effectively ended the First Anglo-Powhatan War—Savage returned to the Indian capital with Ralph Hamor, secretary of the colony. Their mission was to arrange a marriage between Powhatan’s youngest daughter and Sir Thomas Dale, the governor of Jamestown. According to Hamor, the paramount chief greeted Savage warmly, but scolded him for escaping: “My childe you are welcome, you have bin a straunger to me these foure yeeres, at what time I gave you leave to goe to Paspahae [Jamestown] … to see your friends, and till now you never returned.” Despite the warm reception, Hamor and Savage’s attempt to arrange the marriage was unsuccessful.

Savage’s activities between 1614 and 1619 are largely unknown. By 1619 he was living at Martin’s Brandon, the plantation of Captain John Martin, and in 1619 and 1620, Martin and Governor George Yeardley vied for Savage’s services. In 1621 Savage accompanied John Pory, the secretary of the colony, on two trading expeditions to the Eastern Shore of Virginia, home to the Occohannocks and Accomacs. He developed a special relationship with these groups, and in particular with Esmy Shichans, the Eastern Shore’s so-called Laughing King.

At this time the relationship between the English colonists and the Powhatans again edged toward violence. Powhatan had died in 1618; his brother, Opechancanough, had effectively inherited the leadership of Tsenacomoco. Though Opechancanough had been outwardly receptive to talk of peace with the English and converting his people to Christianity, he was planning an attack that would devastate the English colony and, he hoped, send them away permanently. One version of his plan had involved poisoning the English using large quantities of a deadly plant native to the Eastern Shore, which he needed to obtain from Esmy Shichans; in addition to refusing to send the plant, the Indian leader alerted his friend Savage to Opechancanough’s true intentions. Savage tried to warn English authorities, including Jamestown’s new governor, Sir Francis Wyatt, but his message fell on deaf ears. Wyatt had taken Opechancanough’s promises of peace at face value, writing to the Virginia Company of London that the English enjoyed “very great amytie and confidence w[i]th the natives.” On March 22, 1622, Opechancanough led a swift and terrible assault on outlying plantations that killed as many as 347 colonists, or about one-fourth of the English population in Virginia. The event initiated the Second Anglo-Powhatan War (1622–1632). The conflict lasted a decade, during which time colonial authorities relied on interpreters to reinforce their alliance with the Patawomecks and, in Savage’s case, to leverage his good relationship with the Accomacs and Occohannocks to obtain much-needed food and secure lands.

In the years that followed, some questioned Savage’s loyalties, but not his talents. Pory wrote that Savage “with much honestie and good successe hath served the publicke without any publike recompence, yet had an arrow shot through his body in their service.” Former governor Yeardley, showing less kindness than Pory, poached Savage from the colonial government by having him convicted of slander and insubordination against Captain William Eppes, a business associate of Yeardley’s with a violent streak, and sentenced Savage to serve his and Eppes’s own interests. In March 1625 Savage was designated the official interpreter of the Accomac region, but was ordered not to interact with the Indians without first securing Eppes’s permission, perhaps because he was not trusted. Savage worked for Yeardley and Eppes until 1627, when the former died and the latter left Virginia for the West Indies. At this point, Savage focused his attention on the burgeoning—and profitable—Indian fur trade.

In or around 1621, Savage had received from Esmy Shichans a large tract of land on the Eastern Shore containing an estimated 9,000 acres. (This tract of land would become known as Savage’s Neck.) About two years later, he married a woman named Hannah (sometimes Ann), who had come to Virginia at her own expense in 1621 on the Seaflower. The two had a son, John, around 1624. Savage’s prosperity in the fur trade is reflected in the records of the day: by early 1625, Savage was recorded as possessing a house, a barn, a boat, and two servants; two years later, he was the owner of a 150-acre plantation, Savages Choice.

Having added the role of planter to his resume, Savage continued to serve as an interpreter until his death in or before September 1633. He was survived by his son, who inherited his land, and his wife, who by 1638 had married a planter named Daniel Cugley.

RELATED CONTENT
Categories:
Type:
MAP
TIMELINE
ca. 1595
Thomas Savage is born in England.
January 2, 1608
Thomas Savage, a young laborer, arrives in Virginia aboard the John and Francis.
February 1608
Powhatan, the paramount chief of Tsenacomoco, exchanges a boy named Namontack for the English boy Thomas Savage. The boys will learn the other's language in order to eventually serve as interpreters.
1610
Thomas Savage travels to Jamestown and does not return to Tsenacomoco.
May 1614
Thomas Savage accompanies Ralph Hamor to Werowocomoco to try to arrange a marriage between Powhatan's youngest daughter and Sir Thomas Dale. Powhatan greets Savage warmly.
1619—1620
Governor George Yeardley sends Thomas Savage on a trading mission, not realizing that Savage is in the employ of Captain John Martin of Martin's Brandon.
1621
Thomas Savage accompanies John Pory on two trading expeditions to the Eastern Shore, where he establishes a good relationship with the Occohannock and Accomac Indians.
1621
Esmy Shichans, the so-called Laughing King of the Eastern Shore, gives Thomas Savage a large tract of land measuring some 9,000 acres.
ca. 1623
Thomas Savage marries a woman named Hannah, sometimes known as Ann, who came to the colony at her own expense in 1621.
1624
Former governor Sir George Yeardley convicts Thomas Savage of slander and insubordination against Captain William Eppes, commander of the Eastern Shore plantations and an associate of Yeardley's. Savage is sentenced to serve Yeardley and Eppes.
1624
John Savage is born to Thomas and Hannah Savage.
Early 1625
Thomas Savage, his wife, Hannah, and their son, John, are living on the Eastern Shore.
March 7, 1625
Thomas Savage is made the official interpreter of the plantation of Accomack and is subject to the orders he receives from Captain William Eppes, the Eastern Shore's commander.
May 1625
Thomas Savage is credited with a dividend of land, which is included in a list that is sent back to England.
December 12, 1627
Hannah Savage receives a patent for 50 acres of land on the Eastern Shore, a neck of land on which the Savage household is then seated.
By September 1633
Thomas Savage dies, leaving his real estate to his son, John Savage.
FURTHER READING
CITE THIS ENTRY