Blair was born on August 14, 1670, to wealthy Surry County tobacco planter, trader, and land speculator Benjamin Harrison II and his wife, Hannah Churchill Harrison. Benjamin Harrison II served in the House of Burgesses and on the governor’s Council. Blair was the oldest of six siblings, all of whom would make socially advantageous matches with other members of Virginia gentry families. Blair’s brother Benjamin Harrison III would become the colony’s attorney general and the Speaker of the House of Burgesses and the great-grandfather of President William Henry Harrison.

Blair contracted to marry William Roscow in April 1687 but broke the engagement to marry James Blair, a Scottish-born Anglican minister who served the Henrico Parish, on June 2, 1687. According to an anecdote recorded years later by Francis Nicholson, governor of the Virginia colony from 1698 to 1705, Sarah Blair refused three times to vow to obey her husband during their wedding ceremony. When asked to repeat “obey” as part of the vows, she responded, “No obey.” The presiding minister refused to proceed and a second time she said “No obey.” When she said “No obey” a third time, the minister relented and went on with the ceremony. Her apparent ability to defy the religious and social standards of her time may have been a reflection of her status as a member of the powerful Harrison family relative to newcomers to the colony such as Blair. 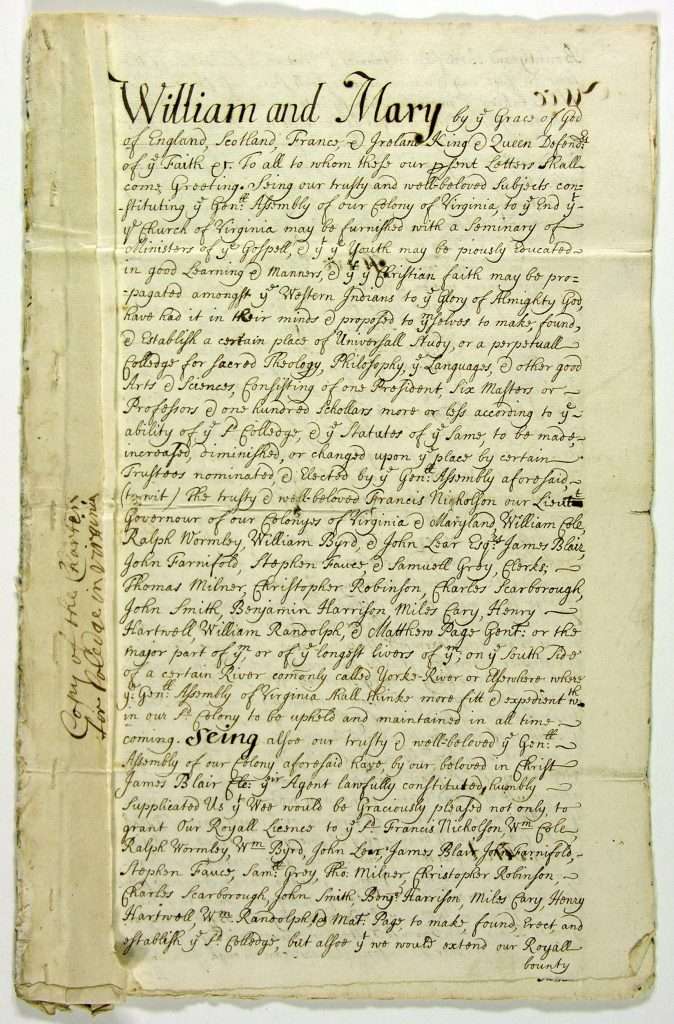 Royal Charter for the College of William and Mary

After their marriage, Sarah and James Blair lived in Henrico for ten years before moving to Rich Neck Plantation on land rented to them by longstanding Harrison family allies the Ludwells. James Blair was instrumental in the founding of the College of William and Mary in 1693, and the couple also kept an apartment in the college building in Williamsburg. On at least two occasions (from 1691 to 1694 and again from 1697 to 1698), James Blair sailed to England to advance political causes, leaving his wife behind to manage their affairs in Virginia. Sarah Blair apparently helped her husband and his business associates run one of the most successful trading stores in Williamsburg, where cash-poor planters could exchange tobacco for goods. Blair’s involvement in business was criticized by Governor Nicholson, one of her husband’s greatest political enemies, who charged that James Blair “forced his own wife to keep store in his house, without shoes or stockings” (Parke Rouse Jr., James Blair of Virginia, 1971).

After his 1689 appointment as Virginia’s commissary, or highest-ranking representative of the Anglican church, James Blair became one of the most powerful figures in the colony. Sarah Blair was frequently caught in the crossfire of her husband’s political battles. In 1696, a young Daniel Parke, allied with James Blair’s enemy Governor Edmund Andros, allegedly dragged Blair from the pew at Williamsburg’s Bruton Parish Church where she had been invited to sit by the Ludwells “to have a blow at Mr. Blair” (Parke Rouse Jr., James Blair of Virginia, 1971). 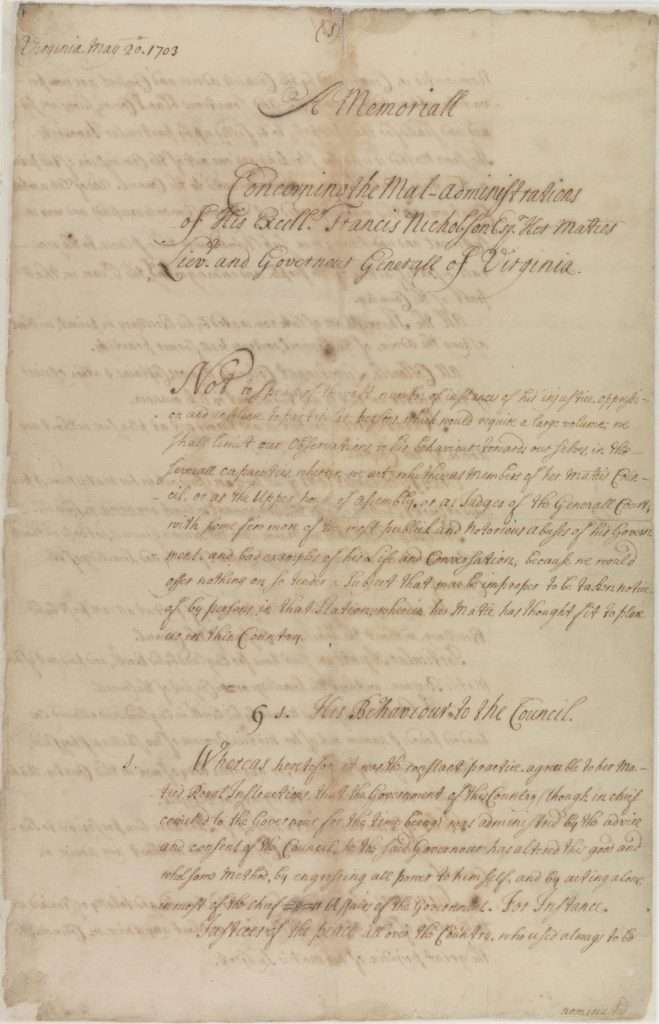 On another occasion, as she and her husband lay in bed in their apartment at William and Mary in 1702, they were startled awake by someone trying to break in, probably the erratic Governor Nicholson. That year, as part of James Blair’s mission to have Governor Nicholson recalled, the Blairs traveled to London together, where English artist John Hargreaves painted their portraits.

The marriage was by most accounts not a happy one; James Blair was known to have a temper. In March 1709, William Byrd II recorded in his diary that he visited the Blairs and “was surprised to find Mrs. Blair drunk, which is growing pretty common with her, and her relatives disguise it under the name of consolation.” Byrd made a further six mentions of Sarah Blair in his diary, but no other reference to her drinking. If James and Sarah Blair had any children, they did not survive to adulthood and are not mentioned in colonial records. Sarah Blair died on May 5, 1713, at the age of forty-two, “exceeding beloved and lamented,” as noted in the epitaph on her tombstone, and was buried in the Jamestown churchyard. Thirty years later, James Blair chose to be buried alongside his wife rather than in the crypt at the College of William and Mary.

June 2, 1687
James Blair marries seventeen-year-old Sarah Harrison, of Surry County. At the wedding, she adamantly refuses to assent to the portion of the ceremony obliging her to obey her husband.
December 15, 1689
James Blair is named commissary, or the bishop's representative, with authority to preside over the Anglican clergy of Virginia in administrative matters. He is preceded in the post by John Clayton.
June 1691
James Blair leaves for England to seek the backing of King William, Queen Mary, and others for a proposed college in Virginia, leaving Sarah Harrison Blair behind to manage affairs in Henrico.
1693

James Blair returns to Virginia and in September presents the new College of William and Mary’s charter to the council at Jamestown.

William Byrd II mentions in his diary that it is “growing pretty common” for Sarah Harrison Blair to be drunk.

1710
James Blair becomes the rector of Bruton Parish Church in Williamsburg after the death of one of his most outspoken clerical opponents, Solomon Whateley.
May 5, 1713
Sarah Harrison Blair, wife of the Anglican minister James Blair, dies.
April 18, 1743
James Blair dies in Williamsburg of a gangrenous rupture. He is buried beside his wife in the Jamestown churchyard.
FURTHER READING