Sapphira and the Slave Girl is a detailed portrait of Henry and Sapphira Colbert, whose backcountry mill once belonged to Sapphira’s wealthier, eastern Virginia family. The miller is described as “a man of upright character, straightforward and determined,” whose eyes “were puzzling; dark and grave.” Sapphira, meanwhile, is cultivated and sometimes deceptive. “Her face was pleasant,” Cather writes, “very attractive to people who were not irked by the slight shade of placid self-esteem.”

Although Henry is one of the novel’s most passive characters, his wife is the one who is largely unable to walk. From her “crude invalid’s chair” she rules the household and, in particular, the slaves. When she comes to believe that her housekeeper’s daughter, Nancy, is having a relationship with Henry, Sapphira first attempts to have her sold, but Henry refuses. The mistress then invites her nephew Martin for a long visit, creating the circumstances in which he might rape the slave. Martin fails, but his mere presence prompts Henry and his widowed daughter, Rachel—both of whom have long harbored antislavery notions—to assist in Nancy’s escape. In an epilogue that takes place twenty-five years later, in 1881, Nancy returns to the Shenandoah Valley, and the point of view shifts from third person to first person, suggesting that a Cather-like storyteller had witnessed Nancy’s homecoming as a child. 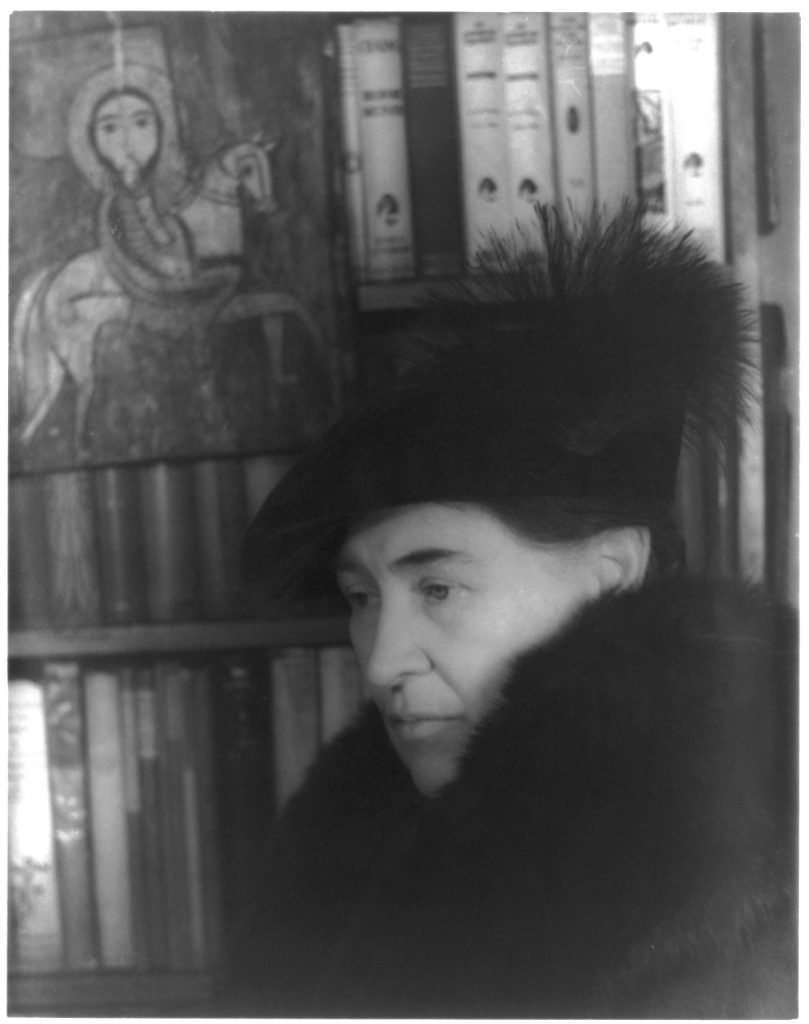 Cather is most popularly associated with the Midwest, and Nebraska in particular. That Sapphira and the Slave Girl is a pastoral novel steeped in nostalgia for antebellum Virginia is ironic. Cather is given to long lists of flowers, and she describes the land in often idyllic terms: “In all the rich flowering and blushing and blooming of a Virginia spring, the scentless dogwood is the whitest thing and yet the most austere, the most unearthly.” This has prompted some critics to note, in the words of Naomi E. Morgenstern, “the strange mismatch between the story’s affect and the tale it has to tell.”

In addition, Sapphira is a southern plantation novel, a genre popular since George Tucker wrote The Valley of Shenandoah in 1824 but epitomized by Margaret Mitchell’s Gone with the Wind (1936). Cather’s renderings of plant life, clothing, tools and utensils, and the daily routine—for both whites and African Americans—on Mill Farm are so thorough as to be documentarian. She periodically inserts footnotes to explain references in dialogue and organizes the novel through multiple perspectives, which provide a three-dimensional view of the characters, setting, and action. (Cather visited Virginia while writing the novel in order to conduct research.)

Cather’s descriptions of African Americans, however, have opened her up to harsh criticism over the years. Her history of the elderly slave Jezebel, for instance—she “came from a fierce cannibal people, and had not been broken in by weeks of discipline in the stockade”—is dated and condescending. So, too, are repeated references to “gay darkies” and Cather’s rendering of black dialect: “Lawd-a’mighty, Miss Sapphy! Jest as if I’d think of bein’ savin’ fo’ ole Aunt Jezebel! It never would cross my thought!” By contrast, both William Styron in The Confessions of Nat Turner (1967) and Edward P. Jones in The Known World (2003) handle African American speech with greater nuance and sensitivity. Their books, however, were authored within a very different social and historical context. 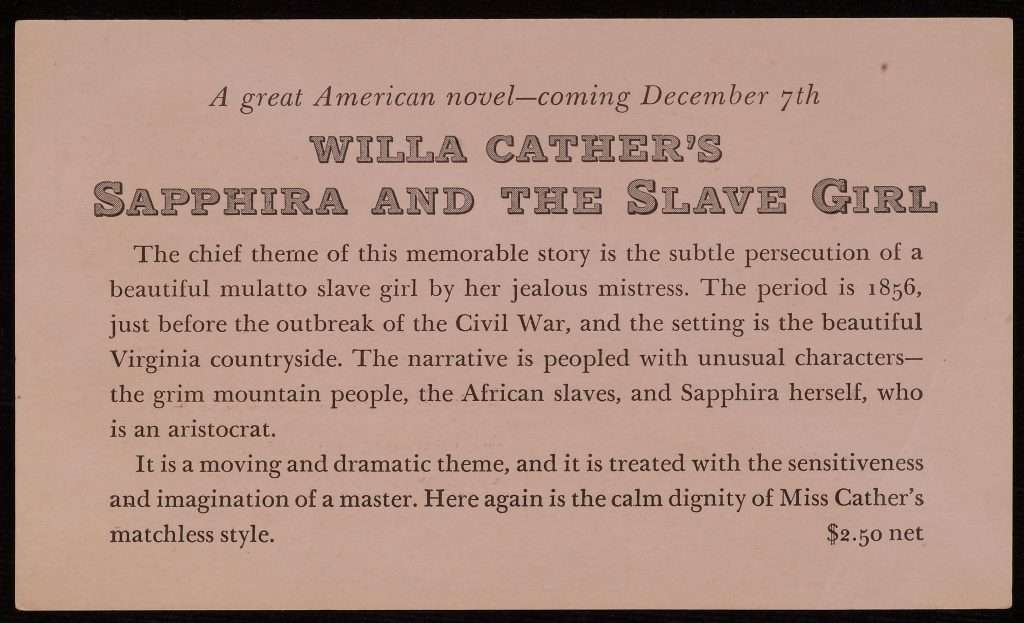 An advertisement for Sapphira and the Slave Girl

Reviewers by and large approved of Sapphira and the Slave Girl when it appeared toward the end of 1940, and commented in particular on its portrait of slavery and African Americans. Cather’s “triumph,” the New York Times argued, “is that she has been able to write a fine novel about slavery and the South in which the Civil War itself is dropped out as an irrelevance to her work of art.” The Washington Post, meanwhile, likened Sapphira to Harriet Beecher Stowe’s Uncle Tom’s Cabin (1852), but purged of the latter’s “naïveté, its sentimentality and its melodrama and minus Uncle Tom himself.” In fact, wrote the Post, Cather “has sketched, especially in Jezebel, the domesticated cannibal, and in Till, the housemaid, what for all their brevity, are probably the finest bits of Negro portraiture in all literature.”

In the intervening years, the critical consensus has more or less reversed, with Christopher Benfey’s assessment being typical: “Cather’s treatment of slavery … is embarrassing, troubling, [and] repulsive to most contemporary readers.” These critics cite more than just Cather’s language. They suggest, for instance, that Cather minimized the violence endured by slaves—Martin’s attempted rape is more menacing than actually violent—and repeatedly portrayed slaves as preferring bondage to the alternative. When Henry offers to free his slave Sampson, the man breaks down and tells his master he would almost sooner abandon his own children than leave the mill. Critic Deborah Carlin argues that the problem lies in Cather’s twin and irreconcilable purposes for the novel: a loving remembrance of her childhood home in Virginia and a gritty evocation of that place’s “peculiar institution.”

Other critics, in particular Merrill Maguire Skaggs, suggest that such tensions are the whole point. She argues that Cather took the stereotypical plantation novel and turned it on its head—giving the house’s power not to the master but to the invalid mistress, preventing rape instead of consummating it, and telling an insistently ugly tale inside of a romantic setting. Skaggs also praises Cather for taking a distinctively female approach to her portrayal of slavery.

In the meantime, Cather’s focus on female characters in Sapphira has led some critics to read the action erotically. “The question of Sapphira’s desire is the founding enigma” in the novel, according to Naomi E. Morgenstern, who points out that Cather did not make clear why the mistress marries Henry, a man below her station and whom she seems not to love so much as respect. According to the novelist and critic Toni Morrison, Sapphira should be read as a complicated interracial story of bodily desire where the mistress recruits Martin to violate Nancy on her behalf. In her “invalid’s chair,” Sapphira “escapes the necessity of inhabiting her own body by dwelling on the young, healthy, and sexually appetizing Nancy.”

These takes on Sapphira and the Slave Girl all reflect the attitudes and mores of the critics’ own times, but the vigor with which they are argued suggests that the novel will continue to be studied in the years to come.