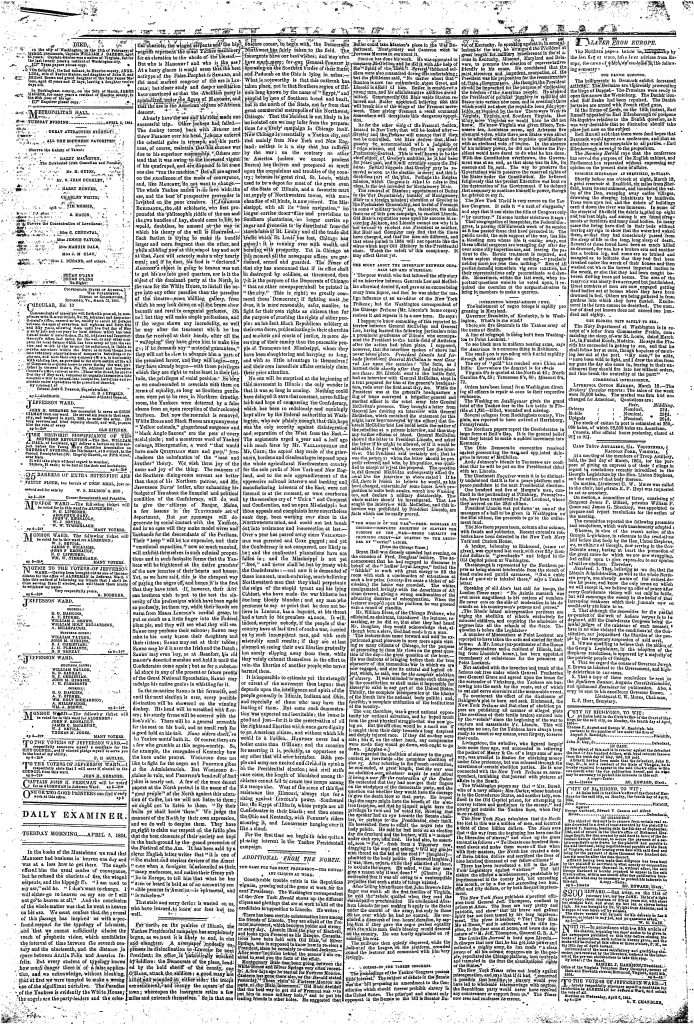 In the books of the Mussulman we read that Mahomet had business in heaven one day and was at a loss how to get there. The angels offered him the usual modes of conveyance, but he refused the chariots of fire, the winged serpents, and the hippogriffs. “I am used to my ass,” said he. “I don’t want to change. I will either go to heaven on my ass or I will not go to heaven at all.” And the conclusion of the whole matter was that he went to heaven on his ass. We must confess that the perusal of this passage has inspired us with a profound respect for the typology of Islamism, and that we cannot sufficiently admire the reach of prophetic vision, which annihilates the interval of the time between the seventh century and the nineteenth, and the distance in space between Aratia Felix and America Infelix. But every student of typology knows how much danger there is of a false application, and we acknowledge, without blushing, that at first we were tempted to make a wrong use of the significant narrative. The Paradise of the Yankees is evidently the White House; the angels are the party-leaders and the celestial chariots, the winged serpents and the hippogriffs represent the usual Yankee machinery for an elevation to the abode of the blessed.—But who is Mahomet? and who is the ass? At a hasty glance it would seem that the best antitype of the False Prophet is Seward, and the most marked congener of the ass is Lincoln; but closer study and deeper meditation have convinced us that the Abolition party is symbolized under the figure of Mahomet, and that the ass is the American citizen of African descent.

Already have the ass and his rider made one successful trip. Other jockeys had failed.—The donkey turned back with Birney and threw Fremont over his head. Lincoln entered the celestial gates in triumph, and his partizans, of course, maintain that his success was due to his superiour assmanship. Others contend that it was owing to the increased vigour of his quadruped, and are disposed to let some one else “run the machine.” But all are agreed on the excellence of the mode of conveyance, and, like Mahomet, do not want to change.—The whole Yankee nation is in love with the ass, and the best of prospective provender is lavished on the poor creature. If Johannes Buridanus, the old scholastic, who first propounded the philosophic riddle of the ass and the two bundles of hay, should come to life, he would, doubtless, be amused at the way in which his theory of the will is illustrated.—Each faction is trying to make its bundle larger and more fragrant than the other, and while nibbling now at this wisp of hay and now at that, Jack will scarcely make a very hearty meal; and if he does, his food is “doctored.” Mahomet’s object in going to heaven was not to get his ass into good quarters, nor is it the object of the dominant party at the North, in the race for the White House, to install the negro into any other paradise than the paradise of the theatre—some shilling gallery, from which he may look down on all the brave show beneath and revel in congenial perfumes. Oh no! but they will make ample professions, and if the negro shows any incredulity, as well he may after the treatment which he has thus far received at their hands, after all the “walloping” they have given him to make him go; if he demands any “material guarantees,” they will not be slow to advance him a part of the promised favour, and they will begin—nay, they have already begun—with those privileges which they are right to value least in their latitude, the privileges of social position. So long as we condescended to associate with them on terms of equality, so long as Southern gentlemen were not yet to be seen in Northern drawing-room, the Yankees were deterred by a false shame from an open reception of their coloured brethren. But now the restraint is removed, White House and Black House are synonymous. “Yellow colonels,” gingerbread surgeons and “black Anglo Saxons” are the pets of every social circle; and a monstrous word of Yankee coinage, Miscegenation, a word “that would have made Quintilian stare and gasp,” foreshadows the culmination of the “man and brother” theory. We wish them joy of the name and joy of the thing. The manners of the Southern dining-room servant are better than those of his Northern patrons, and Mr. Jefferson Davis‘ butler, after exhausting his budget of lies about the financial and political condition of the Confederacy, will do well to give the citizens of Bangor, Maine, a few lessons in the Turveydrop art of deportment. But our runaways will degenerate by social contact with the Yankees, and in no case will they make model wives and husbands for the descendants of the Puritans. Their “keep” will be too expensive, and their “emotional capacities,” now so much vaunted, will exhibit themselves in such colossal proportions and in such fantastic forms that the Yankees will be frightened at the native grandeur of the new inmates of their hearts and homes. Yet, as we have said, this is the cheapest way of paying the negro off, and hence it is the first that they have tried. If, however, their African brethren wish to put to the test the sincerity of the professions which have been made so profusely, let them try, while their hands are warm from Massa Lincoln’s cordial grasp, to put so much as a little finger into the Federal plum pie, and they will see what they will see. Sambo may perfume their saloons; Sambo may take to his sooty bosom their daughters and their sisters; Sambo may eat at their tables; Sambo may lord it over the Irish and the Dutch; Sambo may even buy, as at Beaufort, his old master’s deserted mansion and hold it until the Confederates come again; but as for a substantial share in any of the present or future profits of the Great National Speculation, Sambo may indulge his native genius in whistling for it.

In the meantime Sambo is the favourite, and until the next election is over, every possible distinction will be showered on the winning donkey. His head will be wreathed with flowers; his sturdy frame will be covered with the lion’s skin. There will be a general scramble for the seat on his back, and no small rush for a good hold on his tail. Nunc sidera ducit, as the Yankee motto hath it. Of course there are a few who grumble at this negro-worship. So, for example the renegades of Kentucky bow the knee under protest. Woolford does not like to fight for the negro and Prentice gibes at the Administration. But Woolford declaims in vain, and Prentice’s bead-roll of bad jokes is nearly out. A few of the more decent papers at the North protest in the name of the “good people” of the North against this adoration of Coffee, but we will not listen to them; we ought not to listen to them. “By their fruits ye shall know them.” We judge the manners of the North by their own expression, and we do well to despise them. They have no right to claim our respect on the futile plea that the best elements of their society are kept in the back-ground by the grand procession of the Festival of the Ass. It has been said by a clever English letter writer that “it is one of the stalest and sorriest devices of the Americans when a foreigner is astounded at their many madnesses, and makes their frensy public in Europe, to tell him that what he has seen or heard is held as of no account by sensible persons in America—is ephemeral, and is valueless.”

That stale and sorry device is wasted on us, who have learned to know our foes but too well.

RELATED CONTENT
Categories:
Type:
MAP
TIMELINE
April 5, 1864
University of Virginia professor Basil L. Gildersleeve publishes an essay in the Daily Richmond Examiner comparing enslaved African Americans to the ass in an old saying, attributed to Mohammed upon being offered chariots of fire at the gates of heaven: "I will either go to heaven on my ass or I will not go to heaven at all."
FURTHER READING