The unusually violent storm roared up the narrow valley and struck the Rye Cove community at one o’clock in the afternoon on May 2, 1929. The schoolhouse, a seven-room, two-story building, was directly in its path. The principal, Floyd Noblin, told a reporter for the Scott County Herald-Virginian that it all happened without warning. “I was walking through the hall when I saw what looked like a whirlwind coming up the hollow,” Noblin said. “Trees were swaying. As it neared the school building it became a black cloud … I think I yelled. It struck the building. The next thing I remembered I was standing knee deep in a pond 75 feet from where the building stood before it was demolished.” 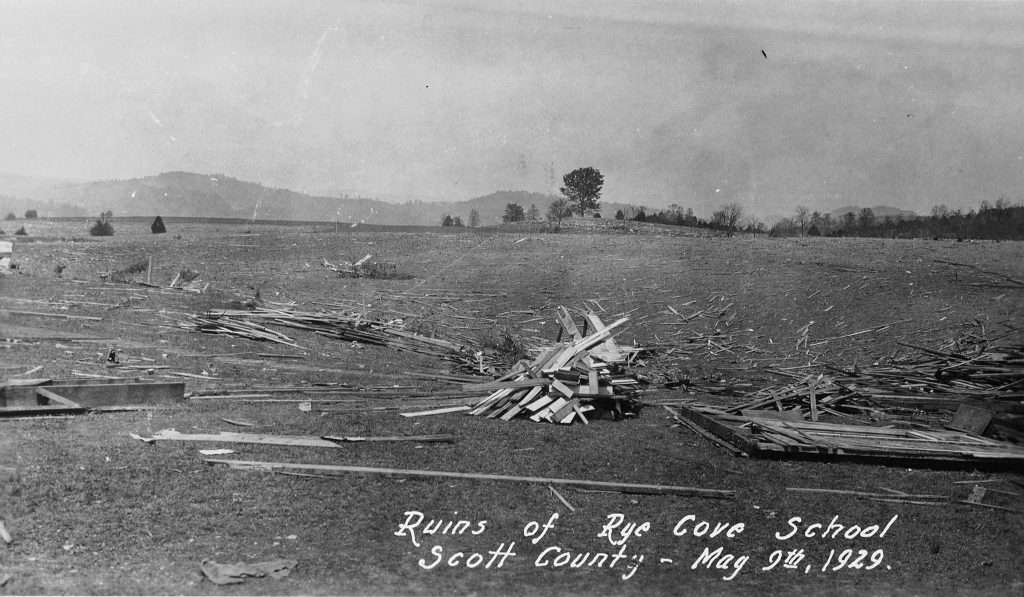 The cyclone hit just after the midday recess, and more than 150 students and teachers were inside. The wooden building was completely destroyed. The storm uprooted trees, lifted the roofs from buildings, destroyed a spring house and a flour mill, and emptied J. B. Stone’s store—located just down the street from the school—of its contents, sweeping the shelves clean of groceries, tools, thread, and candy. A lumber pile near the school was picked up by the wind, and furniture from a nearby house was blown four miles away. Debris was scattered over an area a quarter-mile wide and more than three miles long. William D. Smith, the superintendent of Scott County schools, arrived at Rye Cove an hour after the twister struck. He soon discovered that the only copy of the roll of the school had been destroyed, so there was no systematic way to account for the missing, injured, and dead students as the rain fell and frantic parents arrived at the school.

High school teacher Elizabeth Richmond told the Kingsport Times that “the building collapsed with a smash” just a few seconds after the wind started to howl. There was no opportunity to take cover. Afterward, those who were able carried the dead and injured to nearby houses and barns, but the wind and rain made their task a difficult one. Twelve students, ranging in age from six to eighteen, were killed, along with one instructor, Mary Ava Carter, a twenty-four-year-old first-grade teacher and a recent graduate of Radford State Teachers College. Her body was found seventy-five yards from the school.

After the disaster, a relief train took some of the injured to Clinchport for treatment. Others were taken by ambulance to Bristol and Kingsport, Tennessee. The road out of Rye Cove was narrow and twisting, and only partly paved, so getting survivors out and relief workers in was difficult. Among those who rushed to Rye Cove to help was Scott County native A. P. Carter, a member of the country music trio the Carter Family and a prolific songwriter. He was in the next valley on the day of the storm. Carter was touched by the horror of what he saw and soon composed a song, “The Cyclone of Rye Cove.” The Carter Family recorded the tune that same year for RCA Victor.

The Annual Report of the Superintendent of Public Instruction for 1928–1929 included a few facts about the school: fifty students were enrolled in the high school (twenty-eight boys, twenty-two girls; six of the graduating seniors went to college). There were three high school teachers, with an average monthly salary of $123. One hundred students were enrolled in the elementary grades, and there were four elementary school teachers, with an average monthly salary of $70. There were three hundred books in the school library. The rest of the columns in the report for that year are blank, except for the words, “School and records destroyed by storm.” The State Department of Education dispatched a photographer a week after the cyclone to document the school’s destruction. The Rye Cove Memorial High School opened in the autumn of 1930, and a memorial plaque naming the thirteen storm victims was placed on the building.

RELATED CONTENT
Categories:
MAP
TIMELINE
May 2, 1929
The Rye Cove Cyclone strikes the Rye Cove School in the Appalachian highlands of Scott County, killing twelve students and one teacher and injuring fifty-four. As a result, the school's 1929—1930 term is canceled. Later that year, the singing trio the Carter Family will record "The Cyclone of Rye Cove" for RCA Victor.
Autumn 1930
The Rye Cove Memorial High School opens. A memorial plaque naming the thirteen storm victims is placed on the building.
FURTHER READING
CITE THIS ENTRY