Ruffin was born on January 5, 1794, in Prince George County, Virginia. Ruffin’s mother, Jane Lucas Ruffin, died while he was an infant, and his father, George Ruffin, remarried a few years later. A small and sickly boy, Edmund read voraciously; he mastered the plays of William Shakespeare by the age of eleven. His father died in 1810, not long after Edmund Ruffin began study at the College of William and Mary in Williamsburg. An ambivalent and middling student, he left college after roughly one year.

Before he died, George Ruffin designated a family friend, Thomas Cocke, as his son’s guardian, and Cocke soon became his young charge’s counselor and close confidante. The two, much alike in personality and upbringing, shared, in Edmund Ruffin’s words, “an intimate & warm friendship” until Cocke committed suicide in 1840. Ruffin served as a private in the Virginia militia during the War of 1812, but did not see battle. In 1813, he married Susan Hutchings Travis of Williamsburg; the couple moved to a farm Ruffin inherited from his grandfather, at Coggin’s Point, along the James River in Prince George County. They had eleven children before Susan Ruffin died in 1846. 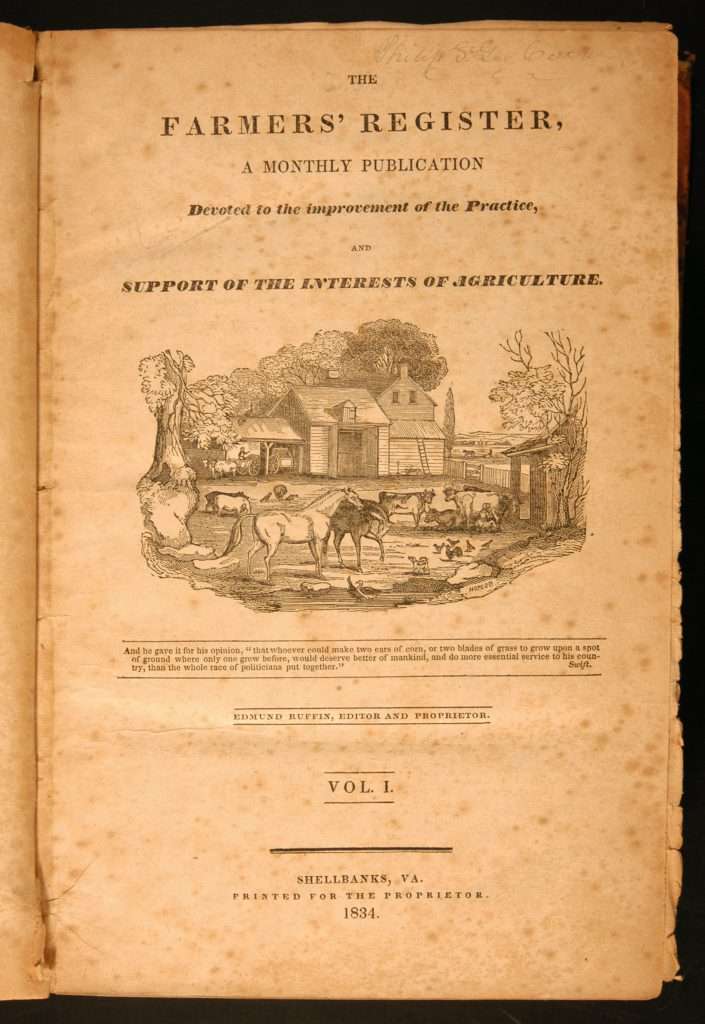 The Farmers’ Register, a Monthly Publication

Ruffin’s property, like many others in Tidewater Virginia, had suffered soil depletion over the previous century. Heavy tobacco production rendered large swaths of land all but barren, helping to spark many Virginians’ westward migration. But rather than abandoning his family’s base, Ruffin threw himself into the study of agriculture, intent on rejuvenating the land and restoring its productivity. Following the lead of Sir Humphry Davy’s studies of agricultural chemistry, Ruffin experimented with the use of marl, an earthy deposit consisting of clay and calcium carbonate. Marl countered the depletion of lime, and thus neutralized soil acidity. Ruffin’s trials met with success, and he publicized his findings. He became a prominent advocate for agricultural reform, writing in John S. Skinner’s journal, the American Farmer, and then publishing a book, An Essay on Calcareous Manures (1832). Ruffin focused less on his own properties, and produced his own journal, Farmers’ Register, for several years; he moved to Petersburg in 1835.

Ruffin’s journal testifies to his gradual shift toward politics. His editorials railing against the banking establishment earned him enemies and provoked the end of the publication. Though he held only one political office, as state senator, Ruffin nonetheless developed into one of the foremost champions of states’ rights, the defense of slavery, and secession. Like other prominent Virginian planters, he once held relatively moderate views; the scholar William K. Scarborough notes that in 1831 Ruffin “interceded vigorously on behalf of a black wrongfully accused of complicity in the Nat Turner revolt.” But by the 1850s, Ruffin had come to embody Southern planters’ investment in, and dependence on, chattel slavery. Ruffin’s family held more than two hundred enslaved African Americans in 1860, and he became convinced that the South would eventually have to secede in order to maintain its social and economic structure. 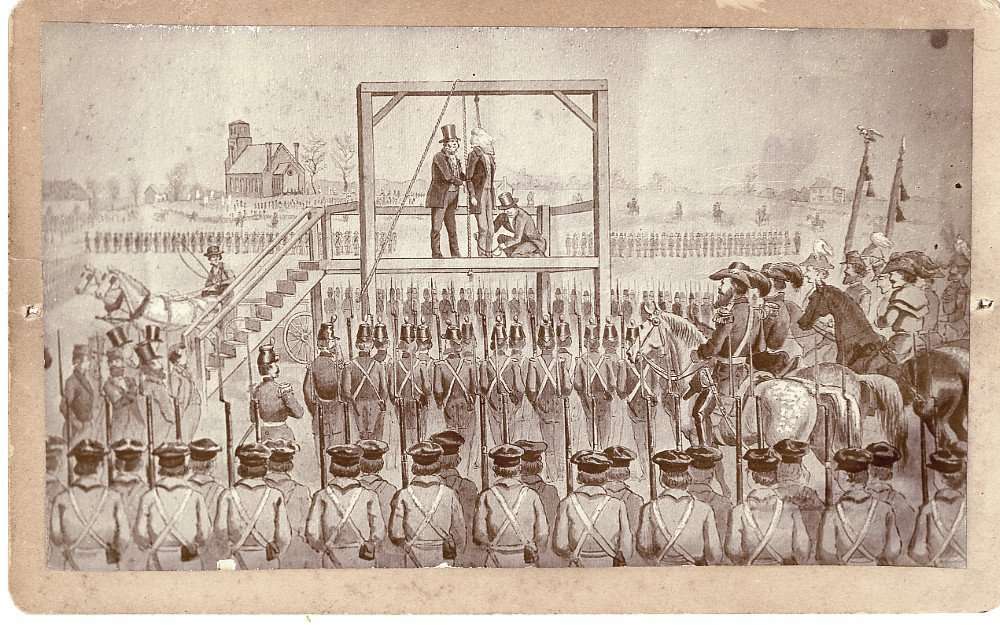 To that end, Ruffin began to devote his energy to politics. He distributed his land to his children, freeing him from day-to-day property management, and focused on furthering the cause of Southern nationhood. Ruffin lacked the oratorical skill and the temperament for political office; his irascible demeanor dictated a role focused on lobbying officials and producing publications. He became acquainted with William Lowndes Yancey of Alabama; together, the two secessionists pushed and prodded the Southern states to action. Ruffin’s influence on the general public may have been minimal, but he nonetheless stoked fire-eating secessionism, and prominent Southerners took note.

John Brown’s failed attempt at instigating a slave rebellion at Harpers Ferry, Virginia, in October 1859, provided fodder for the secessionists’ cause. After depicting Brown’s raid as an act indicative of Northern aggression against the South—despite many Northerners’ rejection of Brown and his tactics—Ruffin and other secessionists howled for retaliation. Determined to witness Brown’s execution, he rushed to Charles Town, where he was promptly arrested as a “suspicious person.” Ruffin learned that only military personnel would be allowed to witness Brown’s hanging, so he appealed to the superintendent of the Virginia Military Institute, who made a place for him among the cadets. In his diary, Ruffin, then sixty-five years old, described himself as “somewhat ludicrous” among this “company of boyish soldiers.” Still, he watched Brown die. Having obtained several of the pikes that Brown and his men carried, he then sent them to Southern governors as a visceral reminder of the purported intent of Northern abolitionists. Ruffin both understood and exploited the shock waves that Brown had set off, arguing, “Such a practical exercise of abolitionist principles is needed to stir the sluggish blood of the south.”

The election of 1860 proved pivotal, as the Democratic Party split and nominated two candidates. Ruffin and Yancey pushed Southern Democrats to insist on protections for slavery that Northern delegates deemed unnecessary and damaging to their electoral chances outside the South. The Democratic division opened the door for Republican Abraham Lincoln‘s victory—just as many secessionists had hoped—and the nation found itself on the brink of civil war. Ruffin continued to argue passionately for disunion as he traveled across the South. He was in both Florida and South Carolina when those states seceded.

In Charleston, on April 12, 1861, Ruffin joined South Carolina troops as they initiated the Civil War by firing cannons on Fort Sumter in Charleston Harbor. There are several theories about who actually fired the first shot of the war, but most scholars agree that the person who fired the first shot is unknown. Ruffin is believed, however, to have fired “the first shot” from Morris Island after the fusillade had already begun. Either way, his presence in Charleston afforded him a hero’s status in the South. Ruffin bemoaned Virginia’s reluctance promptly to follow its Southern neighbors’ example, referring to the Richmond convention formed to consider secession as a “submissionist” group. After Fort Sumter, however, the tide turned; Virginia’s convention voted to secede on April 17, 1861.

During the war, Ruffin initially continued to rally Southern troops and to travel to battle sites but soon felt compelled to remain behind. Physical limitations and Union troops’ occupation of his properties eventually forced him to retreat to Redmoor, a farm in Amelia County. When Confederate general Robert E. Lee surrendered his Army of Northern Virginia at Appomattox Court House on April 9, 1865, Ruffin’s sense of loss and disappointment was profound. Reeling from the South’s defeat, suffering from failing health, and wanting to avoid being a burden to his family, Ruffin committed suicide on June 17, 1865 by shooting himself—following the example of his friend Thomas Cocke some twenty-five years before. He was buried two days later at his Hanover County plantation, Marlbourne.

RELATED CONTENT
Categories:
Type:
Related SOLs:
MAP
TIMELINE
January 5, 1794
Edmund Ruffin is born in Prince George County to George Ruffin and Jane Lucas Ruffin. His mother dies while he is still an infant.
1810
Edmund Ruffin enters the College of William and Mary in Williamsburg but leaves after about one year of study. Ruffin's father, George Ruffin, dies at this time, having appointed Thomas Cocke, a family friend, as his son's guardian.
August 1812
Ruffin joins a Virginia militia company as war with Great Britain erupts. He serves as a private, but does not see any action in battle.
1813
Edmund Ruffin marries Susan Hutchings Travis of Williamsburg, and the couple will have eleven children. Ruffin takes over the family plantation at Coggin's Point in Prince George County.
February 1813
Edmund Ruffin leaves the army having seen no combat in the War of 1812.
1821
Edmund Ruffin, an agriculturalist, publishes the results of his experiments with marl, an earthy deposit consisting of clay and calcium carbonate, in John S. Skinner's journal, American Farmer
1823
Edmund Ruffin is elected to the Senate of Virginia. The planter finds the legislative process cumbersome and irritating, and does not seek reelection, serving one term, until 1827.
1832
Edmund Ruffin publishes a book on his agricultural experiments, An Essay on Calcareous Manures.
June 1833
Edmund Ruffin launches the Farmers' Register, a journal devoted to agricultural improvement. As Ruffin's publications gain currency, he becomes known as a leading agriculturalist and takes an active role in the Virginia State Agricultural Society. The magazine will fold in 1842.
1841—1842
Edmund Ruffin publishes and edits the Bank Reformer, a monthly political magazine.
1843
Edmund Ruffin serves as Agricultural Surveyor for South Carolina.
1844
Edmund Ruffin moves from Coggin's Point to Marlbourne, a plantation in Hanover County.
1852
Edmund Ruffin, a vocal secessionist, publishes The Influence of Slavery; or, Its Absence, on Manners, Morals, and Intellect.
1852
Edmund Ruffin is elected president of the Virginia Agricultural Society.
1860
Edmund Ruffin visits South Carolina, Georgia, and North Carolina, speaking on behalf of secession.
May—June 1860
Edmund Ruffin strenuously lobbies his Democratic Party colleagues at their national conventions in Charleston, South Carolina, and Baltimore, Maryland, on behalf of proslavery positions and, if those fail, secession.
April 12, 1861
Edmund Ruffin reportedly fires the first shot on the U.S. installation, Fort Sumter, in Charleston Harbor, South Carolina. The act initiates the Civil War and makes Ruffin a popular hero in the South.
1861—1865
Edmund Ruffin lives at Beechwood, the Prince George County home of his son, Edmund Jr., as well as at Marlbourne, his Hanover County plantation, and at Redmoor in Amelia County. His finances flounder and his health begins to fail.
June 17, 1865
Edmund Ruffin commits suicide by shooting himself.
June 19, 1865
Edmund Ruffin is buried at Marlbourne, his Hanover County plantation.
FURTHER READING
CITE THIS ENTRY