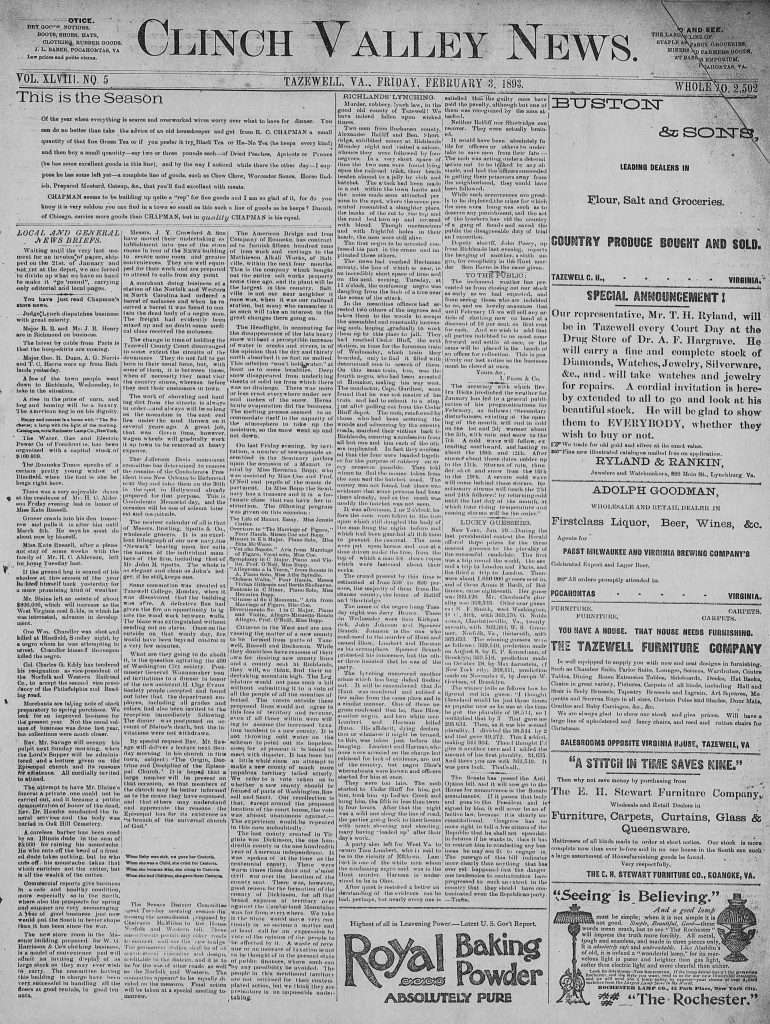 Murder, robbery, lynch law, in the good old county of Tazewell! We have indeed fallen upon wicked times.

Two men from Buchanan county, Alexander Ratliff and Ben. Shortridge, exhibited money at Richlands Monday night and visited a saloon, whence they were followed by four negroes. In a very short space of time the two men were found lying upon the railroad track, their heads beaten almost to a jelly by club and hatchet. The attack had been made in a cut within the town limits and the noise made soon attracted persons to the spot, where the scene presented resembled a slaughter place. the banks of the cut to the top and the road bed torn up and covered with blood. Though unconscious and with frightful holes in their heads, the men were still alive.

The first negro to be arrested confessed his part in the crime and implicated three others.

The news had reached Buchanan county, the line of which is near, in an incredibly short space of time and on the next evening, Tuesday, at 11 o'clock, the confessing negro was dangling form the limb of a tree near the scene of the attack.

In the meantime officers had arrested two others of the negroes and taken them to the woods to escape the assembled and constantly increasing mob, hoping gradually to work them up to this place to jail. They had reached Cedar Bluff, the next station, in time for the forenoon train of Wednesday, which train they boarded, only to find it filled with determined men in search of them. On this same train, too, was the fourth negro, who had been arrested at Honaker, making his way west. The conductor, Capt. Gardner, soon found that he was not master of his train and had to submit to a stop. just after pulling out from the Cedar Bluff depot. The mob, reinforced by those who had been scouring the woods and advancing by the country roads, marched their victims back to Richlands, securing a confession from all but one and him each of the others implicated. In fact they confessed that the four were banded together for the purpose of robbery on ever occasion possible. They told where to find the money taken from the men and the hatchet used. The money was not found, but there was evidence that some persons had been there already, and as the creek was muddy the hatchet was not seen.

It was afternoon, 1 or 2 o'clock, before the men were taken to the tree upon which still dangled the body of the man hung the night before and which had been guarded all this time to prevent its removal. The men were put upon horses and one at a time driven under the tree, from the top of which a man let down ropes which were fastened about their necks.

The crowd present by this time is estimated at from 500 to 800 persons, the majority of them from Buchanan county, the home of Ratliff and Shortridge.

The name of the negro hung Tuesday night was Jerry Brown. Those on Wednesday were Sam Kirkpatrick, John Johnson and Spencer Branch. Johnson is the one who confessed to the murder of Hunt and named Blow, Lambert and Harmon as his accomplices. Spencer Branch protested his innocence, but the other three insisted that he was of the party.

The lynching uncovered another crime which has long defied finding out. It will be remembered that Jo Hunt was murdered and robbed a few miles from the same place and in a similar manner. One of these negroes confessed that he, Sam Blow, another negro, and two white men Lambert and Harman killed Hunt. His affidavit, dying declaration or whatever it might be termed, to this, was taken just before hanging. Lambert and Harman, who once were arrested on the charge but released for lack of evidence, are out of the country, but negro Blow's whereabouts were known and officers started for him at once.

They were too late. The mob started to Cedar Bluff for him, got him, took him up Indian Creek and hung him, the fifth in less that twenty four hours. After that the night was a wild one along the line of road, the parties going back to their homes with much shouting and shooting, many having "loaded up" after their day's work.

A party also left for West Va. to secure Tom Lambert, who is said to be in the vicinity of Elkhorn. Lambert is one of the white men whom the confessing negro said was in the Hung murder. Harman is understood to be in Ohio.

After quiet is restored a better understanding of the evidence can be had, but nearly every one is satisfied that the guilty ones have paid the penalty, although but one of them was recognized by the men attacked.

Neither Ratliff nor Shortridge can recover. They were actually brained.

It would have been absolutely futile for officers or others to undertake to save men from their fate—The mob was acting under a determination not to be [blocked?] by any obstacle, and had the officers succeeded in getting their prisoners away from the neighborhood, they would have been followed.

While such occurrences are greatly to be deplored, the crime for which the men were hung was such as to deserve any punishment, and the act of the lynchers has rid the country of a gang of fiends and saved the public the disagreeable duty of trial and execution.

Deputy sheriff, John Peery, up from Richlands last evening, reports the hanging of another, a sixth negro, for complicity in the Hunt murder. Sam Barns is the name given.