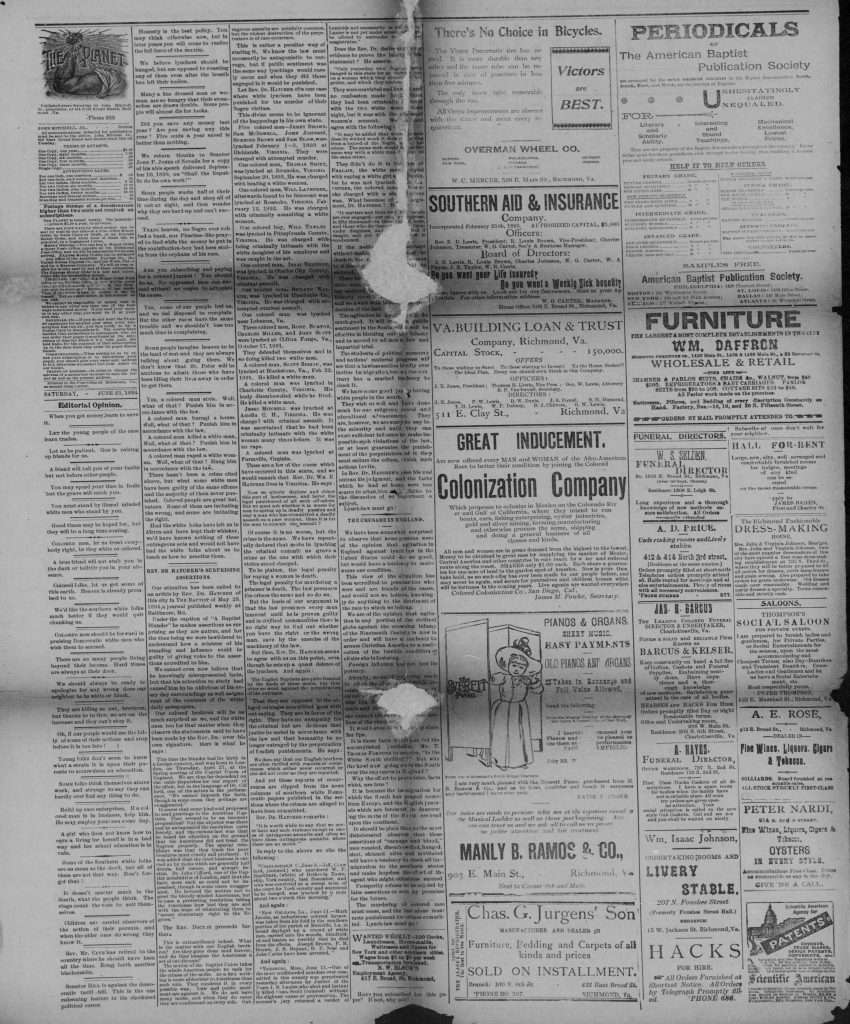 Our attention has been called to an article by Rev. Dr. Hatcher of this city in The Baptist of May 23, 1894, a journal published weekly at Baltimore, Md.

Under the caption of "A Baptist Blunder" he makes assertions as surprising as they are untrue, and for the time being we were bewildered to understand how a minister of his standing and influence could be guilty of giving violence to the assertions accredited to him.

We cannot even now believe that he knowingly misrepresented facts, but that his attention to study had caused him to be oblivious to his every day surrounds as well as ignorant of the contents of the white daily newspapers.

Our colored brethren will be as much surprised as we, and the white ones too for that matter when they observe the statements said to have been made by the Rev. Dr. over his own signature. Here is what he says:

This time the blunder had its birth in a foreign country, and was born in London, on Thursday, April 27, at the Spring meeting of the Baptist Union of England. WE are thus far dependent on the cable dispatches for our report of the affair, but in the language of Dr. Clifford, one of the actors in the performance, "We cannot impeach the facts, though in some cases they perhaps are exaggerated."

It seems that some kind soul proposed to send greetings to the American Baptists. That seemed to be an innocent proposition. But the objector was there and he antagonized the resolution quite fiercely, and the curious fact was that he based his objection on the ground that the Americans did not treat the Negroes properly. The special complaint was that they lynch the poor creatures most cruelly and profusely. It was added that the cruel business is carried on by mobs which are generally half drunk, half insane, and always bestial. Dr. John Clifford, one of the Baptist notabilities of London, said that the facts were such as could not be impeached, though in some cases exaggerated. He favored the motion not to greet the bloody minded Americans, but to pass a protesting resolution telling the Americans how bad they are and with the hope of stimulating them to "secure elementary right to the Negroes."

This is extraordinary indeed. What is the matter with our English brethren? Are they gone clean mad forever, and do they imagine the Americans a set of cut-throats?

The action of the Baptist Union takes the whole American people to task for the crimes of the mobs. As a fact nothing is more abhorrent to Americans than mob rule. They condemn it in every possible way. Law and public sentiment are against it. We do not have many mobs, and when they do occur they are condemned on every side. Outrageous assaults are painfully common, but the violent destruction of the perpetrators is of rare occurrence.

This is rather a peculiar way of stating it. We know the law must necessarily be antagonistic to outrage, but if public sentiment was the same way lynchings would rarely occur and when they did those engaged in it would be punished.

Let Rev. Dr. Hatcher cite one case where white lynchers have been punished for the murder of their Negro victims.

This divine seems to be ignorant of the happenings in his own state.

One colored man, Thomas Smith, was lynched at Roanoke, Virginia September 20, 1893. He was charged with beating a white woman.

One colored ma, Will Lavender, afterwards found to be innocent was lynched at Roanoke, Virginia February 12, 1892. He was charged with criminally assaulting a white woman.

One colored boy, Will Towler was lynched in Pittsylvania County, Virginia. He was charged with being criminally intimate with the white daughter of his employer and was caught in the act.

One colored man, Isaac Brandon, was lynched in Charles City County, Virginia. He was charged with criminal assault.

One colored man, Richard Walker, was lynched in Charlotte Co., Virginia. He was charged with attempted criminal assault.

One colored man was lynched near Lebanon, Va.

They defended themselves and in so doing killed two white men.

A colored man was lynched in Charlotte County, Virginia. His body disembowelled while he lived. He killed a white man.

Jesse Mitchell was lynched at Amelia C. H., Virginia. He was charged with criminal assault. It was ascertained that he had been criminally intimate with the white woman many times before. It was no rape.

A colored man was lynched at Farmville, Virginia.

These are a few of the cases which have occurred in this state, and we would remark that Rev. Dr. Wm. E. Hatcher lives in Virginia. He says:

Now we utterly deplore and abhor this sort of lawlessness, and favor the legal punishment of all such offenders. But we must ask whether it is worse for men to spring up in deadly passion and slay a man who has committed a deadly assault on a pure woman, than it is for the man to commit the assault?

Of course it is no worse, but the crime is the same. We have repeatedly declared that mobs in lynching the criminal commit as grave a crime as the one with which their victim stood charged.

To be plainer, the legal penalty for raping a woman is death.

The legal penalty for murdering a prisoner is death. The law presumes the crimes the same and so do we.

But the basis of our argument is that the law presumes every man innocent until he is proven guilty and in civilized communities there is no right way to find out whether you have the right or the wrong man, save by the exercise of the machinery of the law.

But then, Rev. Dr. Hatcher seems to agree with us on this point, even though he sets up a quasi defence of the lynchers. And again:

The English Baptists are quite frenzied by the deeds of these mobs, but they utter no word against the perpetrators of the outrages.

That they are opposed to the alleged outrages committed goes without saying. They are in favor of the right. They have no sympathy for the criminal but are desirous that justice be meted in accordance with the law and that humanity be no longer outraged by the perpetration of fiendish punishments. He says:

We dare say that our English brethren are often thrilled with reports of occurrences which either never occurred or else did not occur as they are reported.

And yet these reports of occurrences are clipped from the news columns of southern white Democratic papers published in the sections where the crimes are alleged to have been committed.

In reply to the above we cite the following:

"Charleston, S. C., June 2.—Jeff. Crawford, (colored,) who murdered W. P. Blackburn, (white) of Bethesda Township, York county, last December, and who was convicted at a recent term of the court for York county and sentenced to be hanged, was lynched by a mob about two o'clock this morning."

"New Orleans, La., June 11.—Mark Jacobs, an industrious colored farmer, was taken from his field in the southern portion of the parish of Bienville, La. in broad daylight by a crowd of white men, carried into the woods, blindfolded and beaten so terribly that he died from the effects. Joseph Brown, P. M. Brown, J. S. Bryant, D. F. Neal and John Carter have been arrested."

"Vicksburg, Miss., June 11.—One of the most coldblooded murders ever committed in this country was perpetrated yesterday afternoon by Justice of the Peace J. B. Lanier, who shot and instantly killed Chas. Scott (colored) without the slightest cause or provocation. The coroner's jury returned a verdict of homicide not necessarily in self-defence. Lanier is not yet under arrest, although he offered to surrender to [?] magistrates."

Does the Rev. Dr. desire any more evidence to prove the falsity of his statement? He asserts:

"Only yesterday two Negroes were hanged in this state for an outrage upon a woman which they committed together, and which they confessed."

They were convicted and hanged, and no confession made [?] than they had been criminally intimate with the two white women that night, but it was with the aforesaid women's consent. We do not agree with the following:

"It may be added that where the mob does its wicked work it does not spring from a hatred of the Negro, but of his crime. The same mob would do in the same way with a white man if [guilty?] of the same crime.["]

They didn't do it in the case of Fralain, the white man charged with raping a white girl at Roanoke, for he was not lynched. Lavender, the colored man [in?] Roanoke charged with a similar offence was. What becomes of [?] argument, Dr. Hatcher? He says:

"It matters not that very few people are ever engaged—not one, we suppose, in fifty thousand—in these violent acts, and those who do these [?] them under disguises, and [?] if caught, and yet [?] is condemned.["]

The agitation in Eagle [?] will do much good. It will create a public sentiment in the South which will be effective in blotting out this infamy and to accord to all men a fair and impartial trial.

The students of political economy and nations' material progress will see that a lawless section hardly ever invites immigration, but on the contrary has a marked tendency to check it.

We have some good justice loving white people in the south.

They wish us well and have done much for our religious, moral and educational advancement. They are, however, we are sorry to say in the minority and until they can exert sufficient influence to make impossible such violations of the law, or at least guarantee the punishment of the perpetrators of it they must endure the odium, which such actions invite.

In Rev. Dr. Hatcher's case his zeal outran his judgment, and the facts which he had at hand were too scarce to allow him [to do justice?] to the discussion of so important a subject.