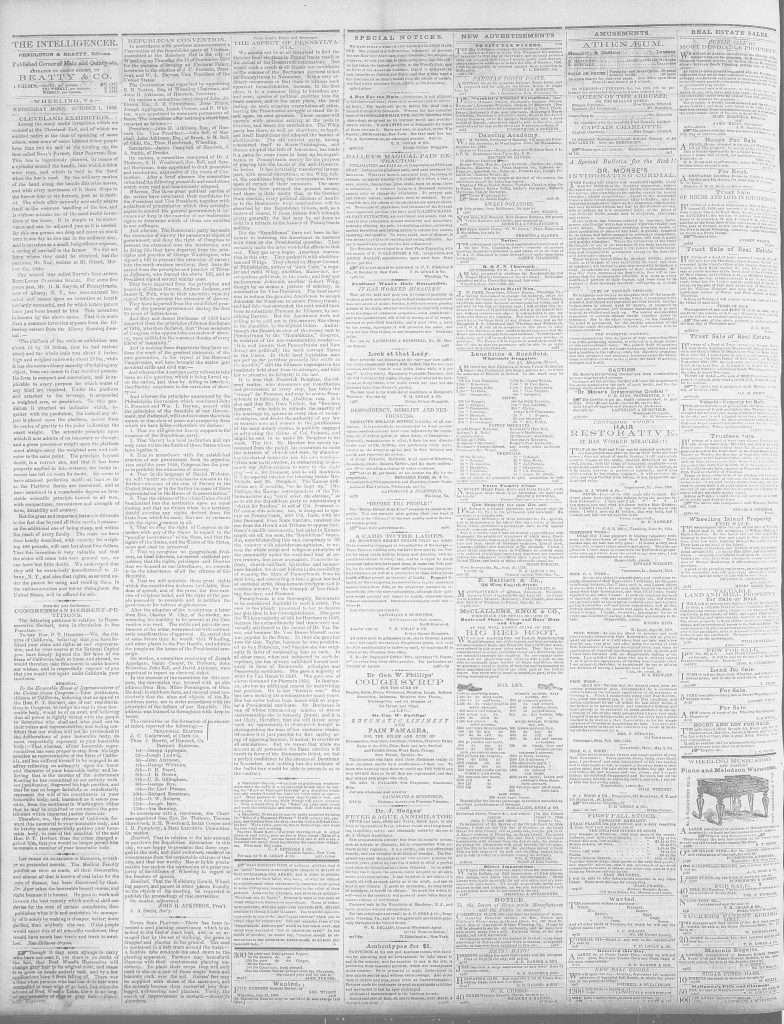 In accordance with previous announcement a Convention of the Republican party of Virginia, assembled at the Melodeon Hall in the city of Wheeling, on Thursday the 18 of September 1856 for the purpose of forming an Electoral Ticket, favorable to the election of J. C. Fremont, President, and W. L. Dayton, Vice President of the United States.

The Convention was organized by appointing E. M. Norton, Esq. of Wheeling Chairman, and John H. Atkinson, of Hancock, Secretary.

Secretaries—James Campbell of Hancock, J. A. Smith, of Brooke.

Whereas, The three great political parties of the nation have nominated their candidates for the President and Vice President, together with a platform of principles by which they severally aspire to control the general government; it becomes our duty in the exercise of our inalienable rights to determine which of them are entitled to our suffrages;

And whereas, The Democratic party has made the extension of slavery the paramount object of government, and deny the right of Congress to prevent the extension into the territories; and in doing this they have departed from the principles and practices of George Washington, who signed a bill to prevent the extension of slavery into the north-western territory; they have departed from the principles and practice of Thomas Jefferson, who framed the above bill, and as President sighed several similar ones:

They have departed from the principles and practice of James Monroe, Andrew Jackson, and James K. Polk, who in their executive capacity signed bills to prevent the extension of slavery.

They have departed from the established practice of the general government during the first 60 years of its existence.

And they and James Buchanan of 1856 have departed from the principles of James Buchanan of 1816, who then declared, that “those members of Congress who opposed the extension of slavery, were entitled to the warmest thanks of every friend of humanity.”

And in making these departures they have undone the work of the greatest statesmen of the past generation, in the repeal of the Missouri Compromise, and have brought the nation into sectional strife and civil war;—

And whereas the American party refuses to take issue on this question, which is being forced upon the nation, and thus by failing to interfere, they tacitly acquiesce in the extension of slavery:—

And whereas the principles announced by the Philadelphia Convention which nominated John C. Fremont and Wm. L. Dayton, accord with the principles of the founders of our Government, and if adopted, will tend to restore the whole nation to that state of peace and prosperity from which we have fallen:— therefore we declare:

1. That we will give our hearty support to the nominee of the Republican party.

2. That Slavery is a local institution and can only exist within the limits of those States whose laws legalize it.

3. That in accordance with the established practice of our government from its organization until the year 1848, Congress has the power to prohibit the extension of slavery.

4. That in the language of Daniel Webster, we will “under no circumstances consent to the further extension of the erea [sic] of Slavery in the United States, or to the further increase of Slave representation in the House of Representatives.”

5. That the citizens of the whole Union should be admitted into the territories upon an equal footing, and that no citizen when in a territory should exercise any rights derived from the State from which he came, that are at variance with the rights common to all.

7. That we recognize no geographical divisions, no local interests, no narrow sectional prejudices; that the rights, privileges and liberties that we demand as our inheritance, we concede to be the inheritance of all the citizens of this Republic.

8. That we will maintain those great rights which the constitution declares inviolable, freedom of speech, and of the press, the free exercise of religious belief, and the right of the people peaceably to assemble and to petition the government for redress of grievances.

After the adoption of the resolutions a letter from Hon. Cassius M. Clay, of Kentucky, announcing his inability to be present at the Convention was read. The noble and patriotic sentiments of the letter, were received with enthusiastic manifestations of approval. He stated that at some future time he would visit Wheeling, and other places in the Pan-Handle, and address the people on the issues of the Presidential campaign.

In the absence of the committee for this purpose, the convention was favored with an able address from Hon. Miller Pennington, of Ohio. He dealt in stubborn facts, and showed most conclusively that the aims and objects of the Republican party, are in strict accordance with the principles of the fathers of our Republic. His address was listened to throughout with deep interest.

The committee on the formation of an electoral ticket, reported the following:―

Resolved, That in relation to the late attempt to put down the Republican association in this city, we are happy to proclaim that those engaged in the mob, and their endorsers, received no countenance from the respectable citizens of this city, and that our worthy Mayor in his proclamation has spoken the sentiments of a great majority of the citizens of Wheeling in regard to the freedom of speech.

Resolved, That the Wellsburg Herald, Wheeling papers, and papers in other places friendly to the objects of the meeting, be requested to publish the proceedings of this convention.