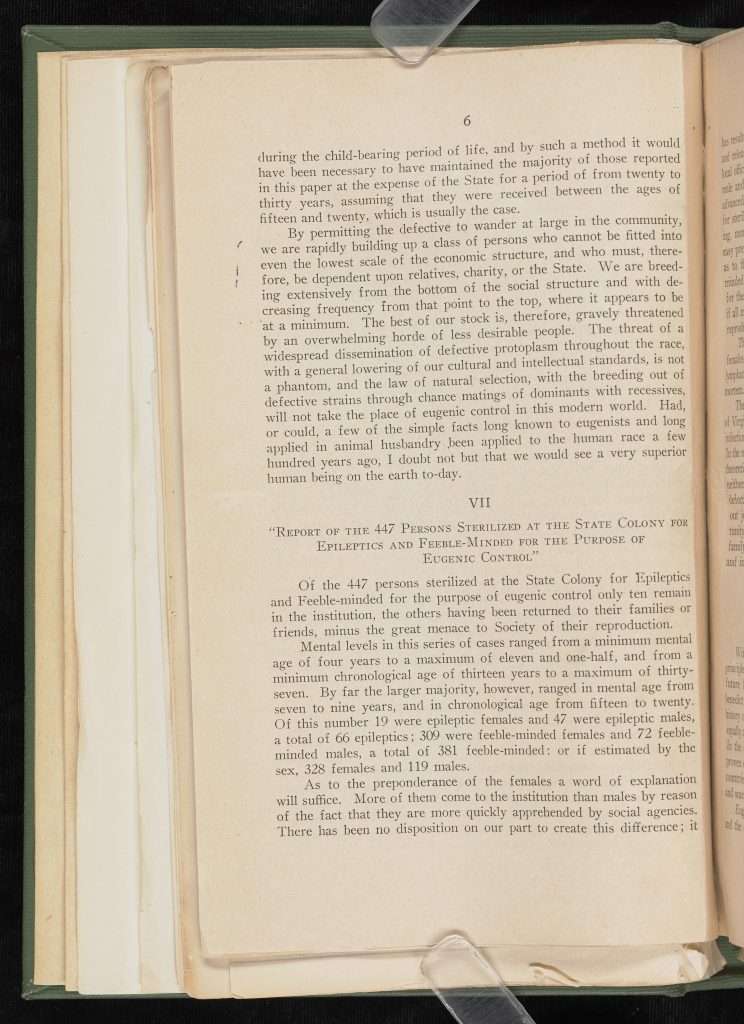 Of the 447 persons sterilized at the State Colony for Epileptics and Feeble-minded for the purpose of eugenic control only ten remain in the institution, the others having been returned to their families or friends, minus the great menace to Society of their reproduction.

Mental levels in this series of cases ranged from a minimum mental age of four years to a maximum of eleven and one-half, and from a minimum chronological age of thirteen years to a maximum of thirty-seven. By far the larger majority, however, ranged in mental age from seven to nine years, and in chronological age from fifteen to twenty. Of this number 19 were epileptic females and 47 were epileptic males, a total of 66 epileptics; 309 were feeble-minded females and 72 feeble-minded males, a total of 381 feeble-minded: or if estimated by the sex, 328 females and 119 males.

As to the preponderance of the females a word of explanation will suffice. More of them come to the institution than males by reason of the fact that they are more quickly apprehended by social agencies. There has been no disposition on our part to create this difference; it 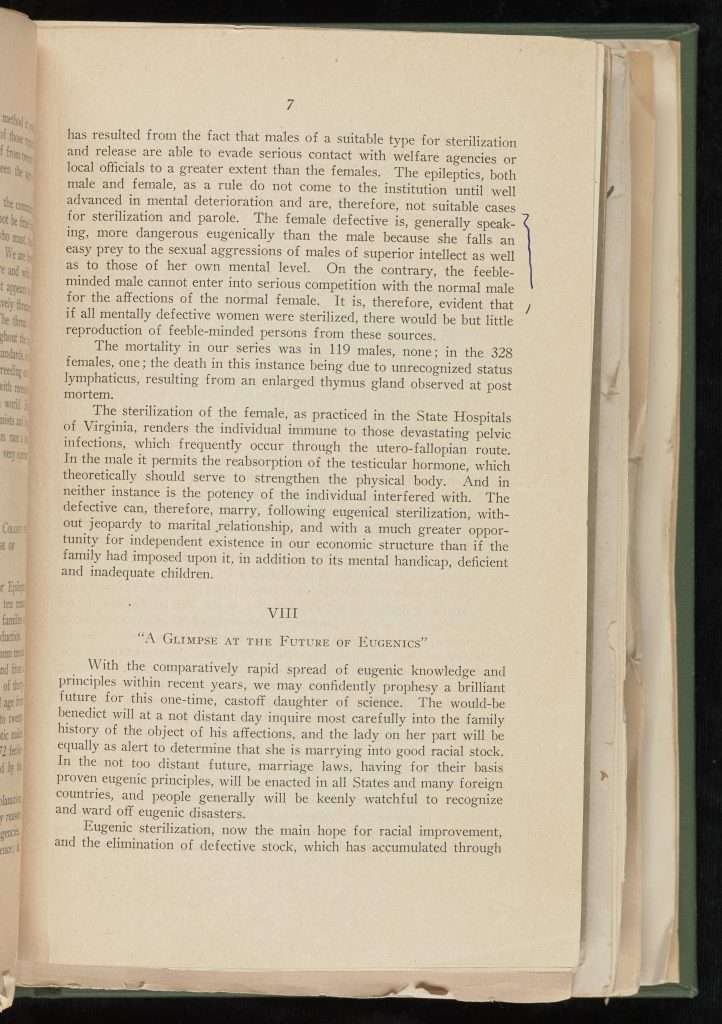 has resulted from the fact that males of a suitable type for sterilization and release are able to evade serious contact with welfare agencies or local officials to a greater extent than the females. The epileptics, both male and female, as a rule do not come to the institution until well advanced in mental deterioration and are, therefore, not suitable cases for sterilization and parole. The female defective is, generally speaking, more dangerous eugenically than the males because she falls an easy prey to the sexual aggressions of male of superior intellect as well as to those of her own mental level. On the contrary, the feeble-minded male cannot enter into serious competition with the normal male for the affections of the normal female. It is, therefore, evident that if all mentally defective women were sterilized, there would be but little reproduction of feeble-minded persons from these sources.

The mortality in our series was in 119 males, none; in the 328 females, one; the death in this instance being due to unrecognized status lymphaticus, resulting from an enlarged thymus gland observed at post mortem.

The sterilization of the female, as practiced in the State Hospitals of Virginia, renders the individual immune to those devastating pelvic infections, which frequently occur through the utero-fallopian route. In the male it permits the reabsorption of the testicular hormone, which theoretically should serve to strengthen the physical body. And in neither instance is the potency of the individual interfered with. The defective can, therefore, marry, following eugenical sterilization, without jeopardy to marital relationship, and with a much greater opportunity for independent existence in our economic structure than if the family had imposed upon it, in addition to its mental handicap, deficient and inadequate children.

Justifying Eugenics: Excerpts from John Hendren Bell’s The Biological Relationship of Eugenics to the Development of the Human Race (1930)

RELATED CONTENT
Categories:
Type:
MAP
TIMELINE
1931
In Eugenic Control and its Relationship to the Science of Life and Reproduction, John H. Bell details the breadth of the forced sterilization program he oversees at the State Colony for Epileptics and Feeble-Minded in Lynchburg and discusses its merits.
CITE THIS ENTRY