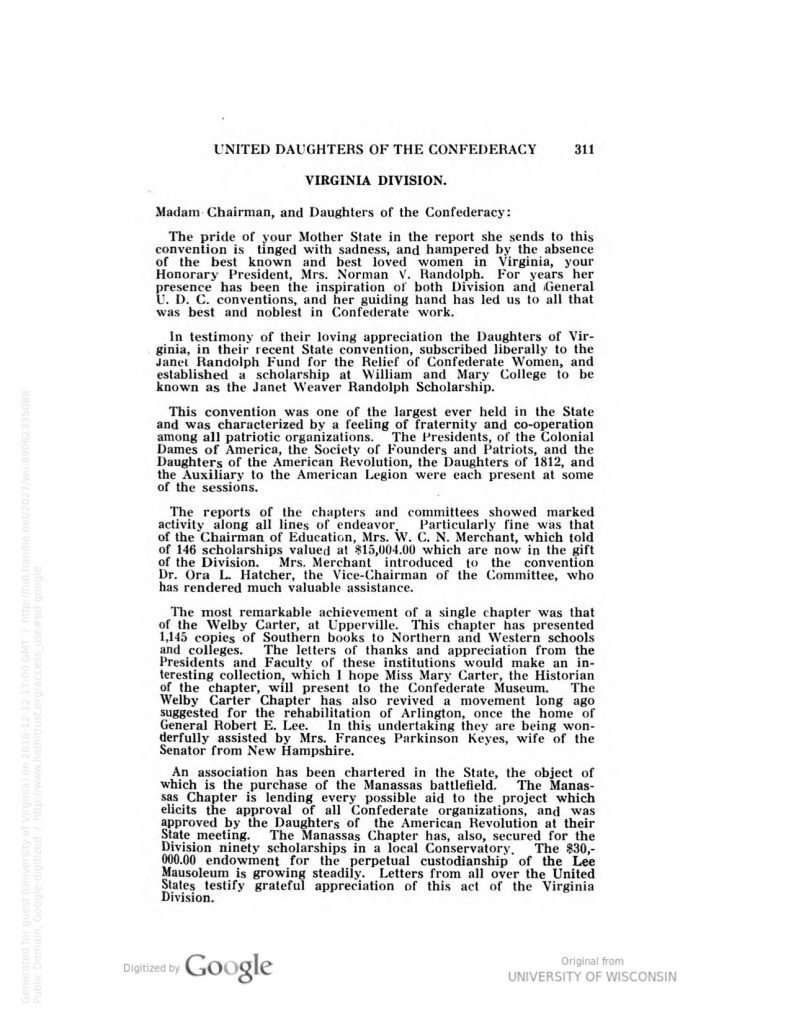 Minutes of the Twenty-Eighth Annual Convention of the United Daughters of the Confederacy, Page 311

Madam Chairman, and Daughters of the Confederacy:

The pride of your Mother State in the report she sends to this convention is tinged with sadness, and hampered by the absence of the best known and best loved women in Virginia, your Honorary President, Mrs. Norman V. Randolph. For years her presence has been the inspiration of both Division and General U. D. C. conventions, and her guiding hand has led us to all that was best in Confederate work.

In testimony of their loving appreciation the Daughters of Virginia, in their recent State convention, subscribed liberally to the Janet Randolph Fund for the Relief of Confederate Women, and established a scholarship at William and Mary College to be known as the Janet Weaver Randolph Scholarship.

The convention was one of the largest ever held in the State and was characterized by a feeling of fraternity and co-operation among all patriotic organizations. The Presidents, of the Colonial Dames of America, the Society of Founders and Patriots, and the Daughters of the American Revolution, the Daughters of 1812, and the Auxiliary to the American Legion were each present at some of the sessions.

The reports of the chapters and committees showed marked activity along all lines of endeavor. Particularly fine was that of the Chairman of Education, Mrs. W. C. N. Merchant, which told of 146 scholarships valued at $15,004.00 which are now in the gift of the Division. Mrs. Merchant introduced to the convention Dr. Ora L. Hatcher, the Vice-Chairman of the Committee, who has rendered much valuable assistance.

The most remarkable achievement of a single chapter was that of the Welby Carter, at Upperville. This chapter has presented 1,145 copies of Southern books to Northern and Western schools and colleges. The letters of thanks and appreciation from the Presidents and Faculty of these institutions would make an interesting collection, which I hope Miss Mary Carter, the Historian of the chapter, will present to the Confederate Museum. The Welby Carter Chapter has also revived a movement long ago suggested for the rehabilitation of Arlington, once the home of General Robert E. Lee. In this undertaking they are being wonderfully assisted by Mrs. Frances Parkinson Keyes, wife of the Senator from New Hampshire.

As association has been chartered in the State, the object of which is the purchase of the Manassas battlefield. The Manassas Chapter is lending every possible aid to the project which elicits the approval of all Confederate organizations, and was approved by the Daughters of the American Revolution at their State meeting. The Manassas Chapter has, also, secured for the Division ninety scholarships in a local Conservatory. The $30,000.00 endowment for the perpetual custodianship of the Lee Mausoleum is growing steadily. Letters from all over the United States testify grateful appreciation of this act of the Virginia Division. 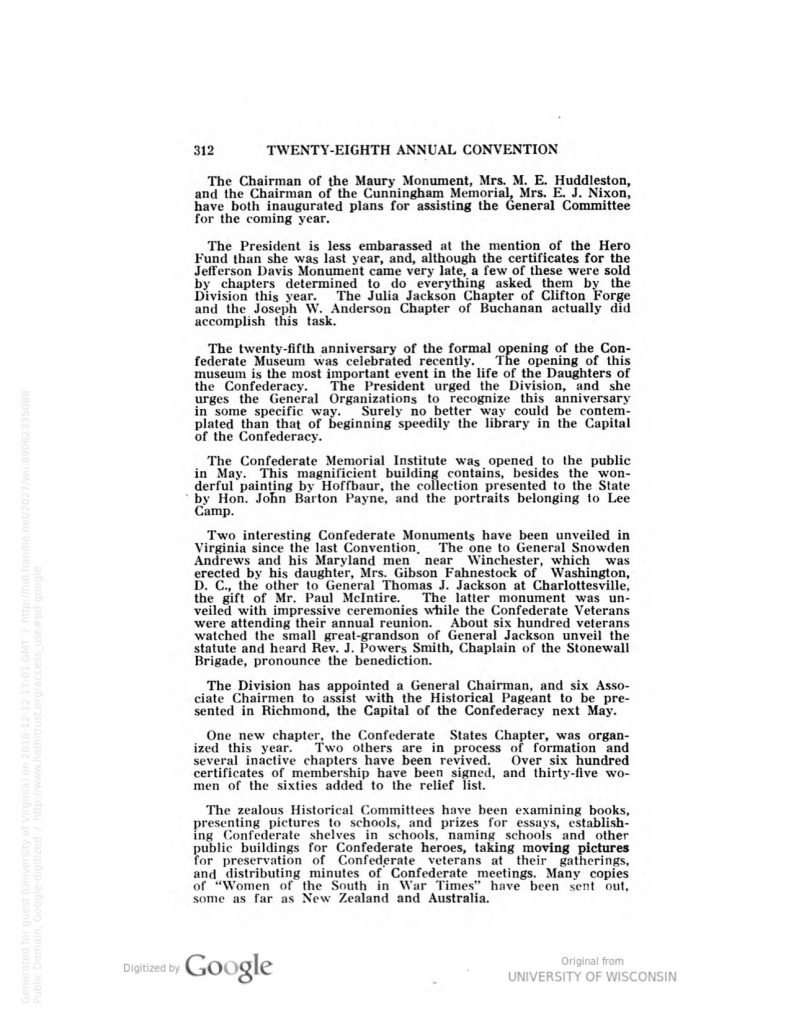 Minutes of the Twenty-Eighth Annual Convention of the United Daughters of the Confederacy, Page 312

The President is less embarassed [sic] at the mention of the Hero Fund than she was last year, and, although the certificates for the Jefferson Davis Monument came very late, a few of these were sold by chapters determined to do everything asked them by the division this year. The Julia Jackson Chapter of Clifton Forge and the Joseph W. Anderson Chapter of Buchanan actually did accomplish this task.

The Confederate Memorial Institute was opened to the public in May. This magnificent building contains, besides the wonderful painting by [Charles] Hoffbaur, the collection presented to the State by Hon. John Barton Payne, and the portraits belonging to Lee Camp.

Two interesting Confederate Monuments have been unveiled in Virginia since the last Convention. The one to General Snowden Andrews and his Maryland men near Winchester, which was erected by his daughter, Mrs. Gibson Fahnestock of Washington D. C., the other to General Thomas J. Jackson at Charlottesville, the gift of Mr. Paul McIntire. The latter monument was unveiled with impressive ceremonies while the Confederate Veterans were attending their annual reunion. About six hundred veterans watched the small great-grandson of General Jackson unveil the statute [sic] and heard Rev. J. Powers Smith, Chaplain of the Stonewall Brigade, pronounce the benediction.

The Division has appointed a General Chairman, and six Associate Chairmen to assist with the Historical Pageant to be presented in Richmond, the Capital of the Confederacy next May.

One new chapter, the Confederate States Chapter, was organized this year. Two others are in process of formation and several inactive chapters have been revived. Over six hundred certificates of membership have been signed, and thirty-five women of the sixties added to the relief list.

The zealous Historical Committees have been examining books, presenting pictures to schools, and prizes for essays, establishing Confederate shelves in schools, naming schools and other public buildings for Confederate heroes, taking moving pictures for preservation of Confederate veterans at their gatherings, and distributing minutes of Confederate meetings. Many copies of “Women of the South in War Times” have been sent out, some as far as New Zealand and Australia. 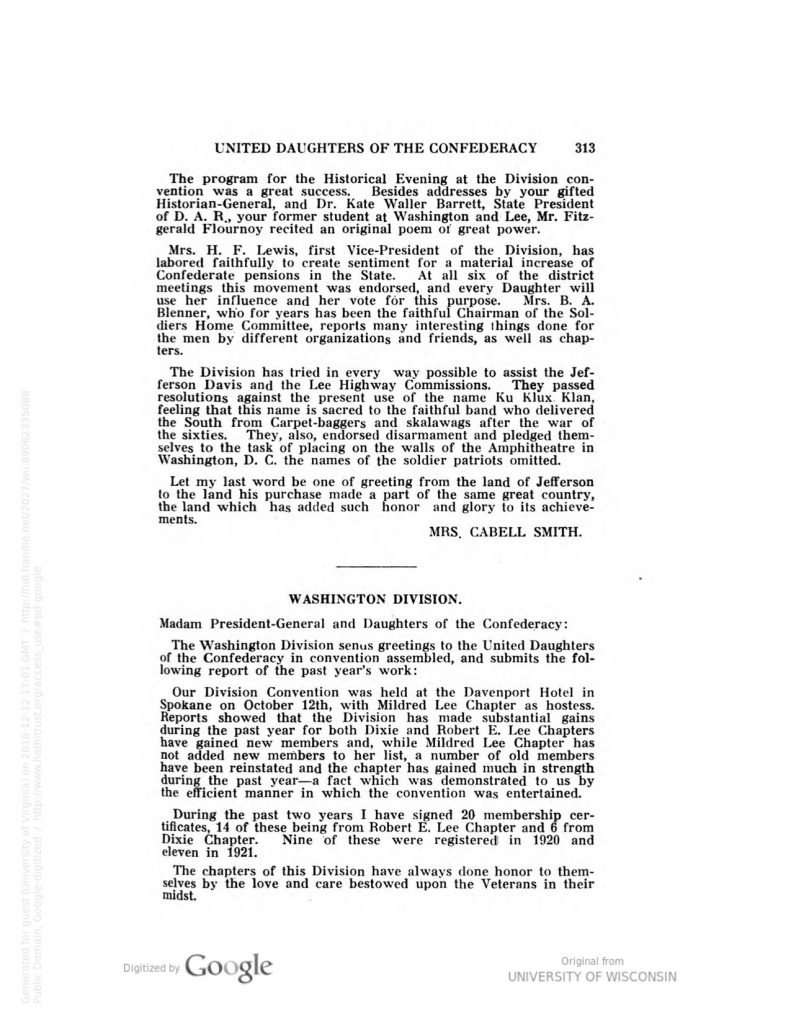 Minutes of the Twenty-Eighth Annual Convention of the United Daughters of the Confederacy, Page 313

The program for the Historical Evening at the Division convention was a great success. Besides addresses by your gifted Historian-General, and Dr. Kate Waller Barrett, State President of D. A. R., your former student at Washington and Lee, Mr. Fitzgerald Flournoy recited an original poem of great power.

Mrs. H. F. Lewis, first Vice-President of the Division, has labored faithfully to create sentiment for a material increase of Confederate pensions in the State. At all six of the district meetings this movement was endorsed, and every Daughter will use her influence and her vote for this purpose. Mrs. B. A. Blenner, who for years has been the faithful Chairman of the Soldiers Home Committee, reports many interesting things done for the men by different organizations and friends, as well as chapters.

The Division has tried in every way possible to assist the Jefferson Davis and Lee Highway Commissions. They passed resolutions against the present use of the name Ku Klux Klan, feeling that this name is sacred to the faithful band who delivered the South from Carpet-baggers and skalawags after the war of the sixties. They, also, endorsed disarmament and pledged themselves to the task of placing on the walls of the Amphitheatre in Washington, D. C. the names of the soldier patriots omitted.

Let my last word be one of greeting from the land of Jefferson to the land his purchase made a part of the same great country, the land which has added such honor and glory to its achievements.