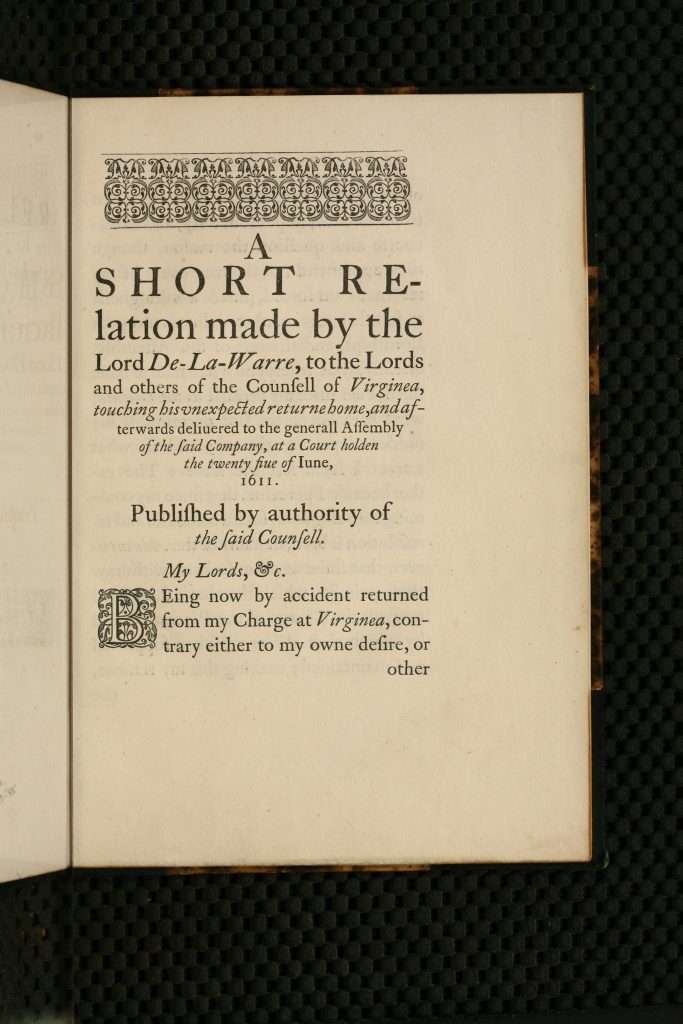 Relation of the Right Honourable the Lord De-La-Warre, Page 1

A Short Relation made by the Lord De-La-Warre, to the Lords and others of the Counsell of Virginea, touching his unexpected returne home, and afterwards delivered to the generall Assembly of the said Company, at a Court holden the twenty five of June, 1611.

Published by authority of the said Counsell.

Being now by accident returned from my Charge at Virginea, contrary either to my owne desire, or 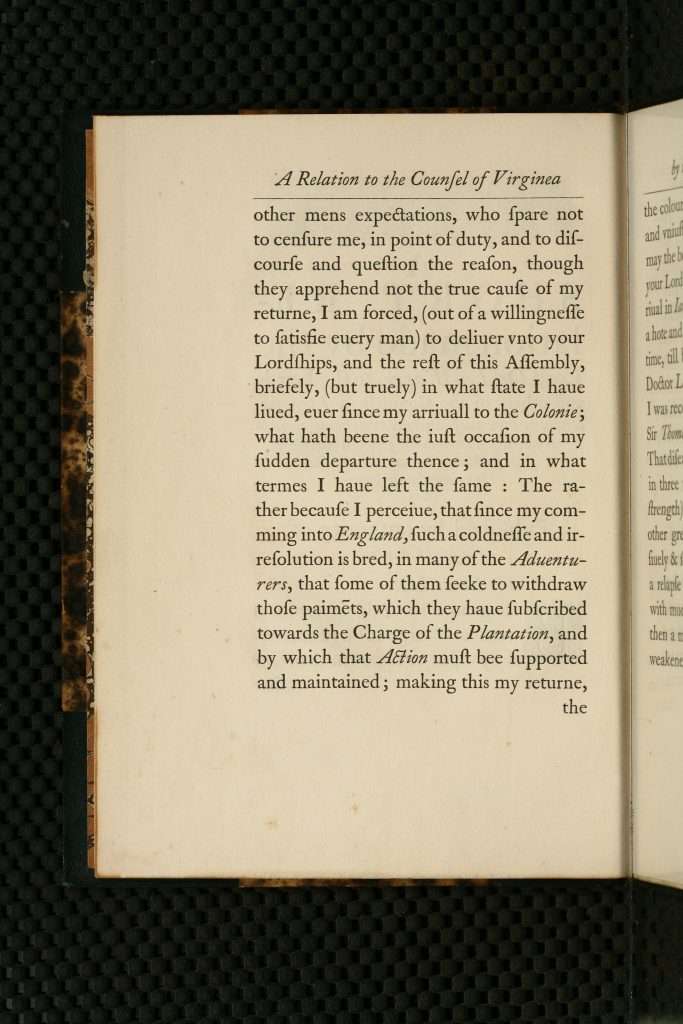 Relation of the Right Honourable the Lord De-La-Warre, Page 2

other men’s expectations, who spare not to censure me, in point of duty, and to discourse and question the reason, though they apprehend not the true cause of my returne, I am forced, (out of a willingnesse to satisfie every man) to deliver unto your Lordships, and the rest of this Assembly, briefely (but truely), in what state I have lived, ever since my arrival to the Colonie; what hath beene the just occasion of my sudden departure thence; and in what termes I have left the same: The rather because I perceive, that since my comming into England, such a coldnesse and irresolution is bred in many of the Adventurers that some of them seeke to withdraw those paiments, which they have subscribed towards the Charge of the Plantation, and by which that Action must bee supported and maintained; making this my returne 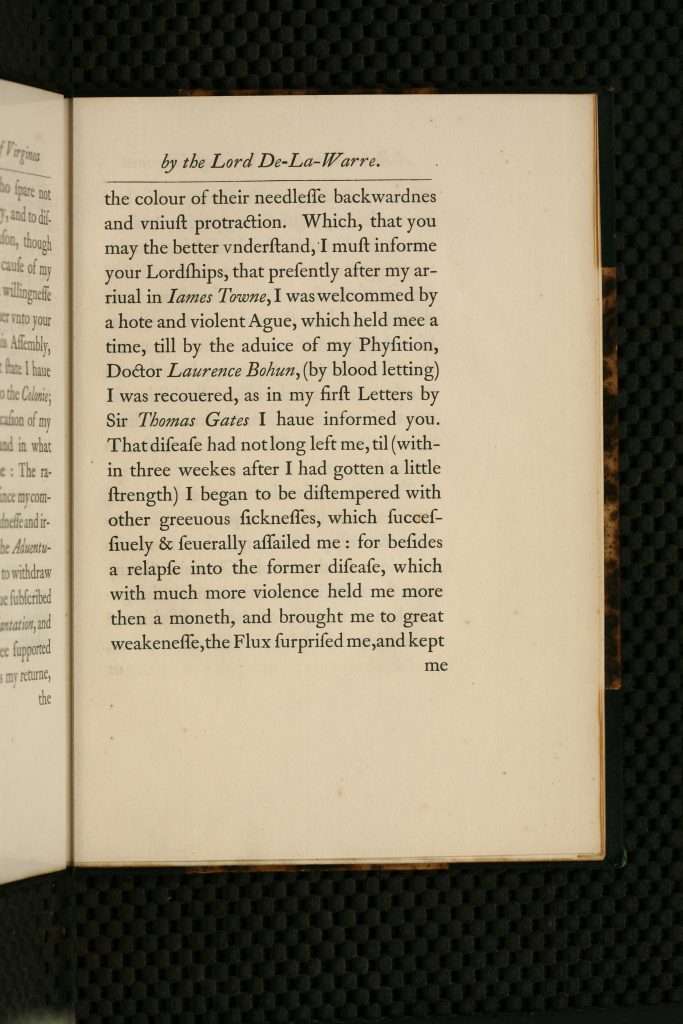 Relation of the Right Honourable the Lord De-La-Warre, Page 3

the colour of their needlesse backwardnes and unjust protraction. Which, that you may the better understand, I must informe your Lordships, that presently after my arrival in James Towne, I was welcommed by a hote and violent Ague, which held mee a time, till by the advice of my Physition, Doctor Laurence Bohun, (by blood letting) I was recovered, as in my first Letters by Sir Thomas Gates I have informed you. That disease had not long left me, til (within three weekes after I had gotten a little strength) I began to be distempered with other greevous sicknesses, which successively and severally assailed me: for besides a relapse into the former disease, which with much more violence held me more than a moneth, and brought me to great weakenesse, the Flux surprised me, and kept 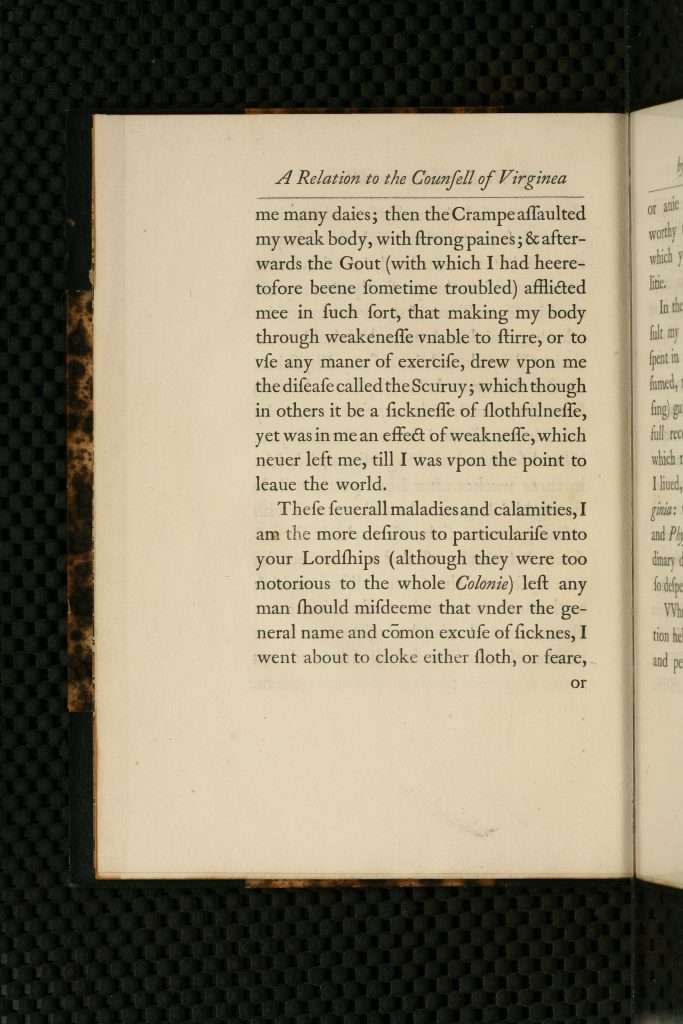 Relation of the Right Honourable the Lord De-La-Warre, Page 4

me many daies: then the Crampe assaulted my weak body, with strong paines; and afterwards the Gout (with which I had heeretofore beene sometimes troubled) afflicted mee in such sort, that making my body through weakenesse unable to stirre, or to use any maner of exercise, drew upon me the disease called the Scurvy; which though in others it be a sicknesse of slothfulnesse, yet was in me an effect of weaknesse, which never left me, till I was upon the point to leave the world.

These severall maladies and calamities, I am the more desirous to particularise unto Your Lordships (although they were too notorious to the whole Colonie) lest any man should misdeeme that under the general name and common excuse of sicknes, I went about to cloke either sloth, or feare, 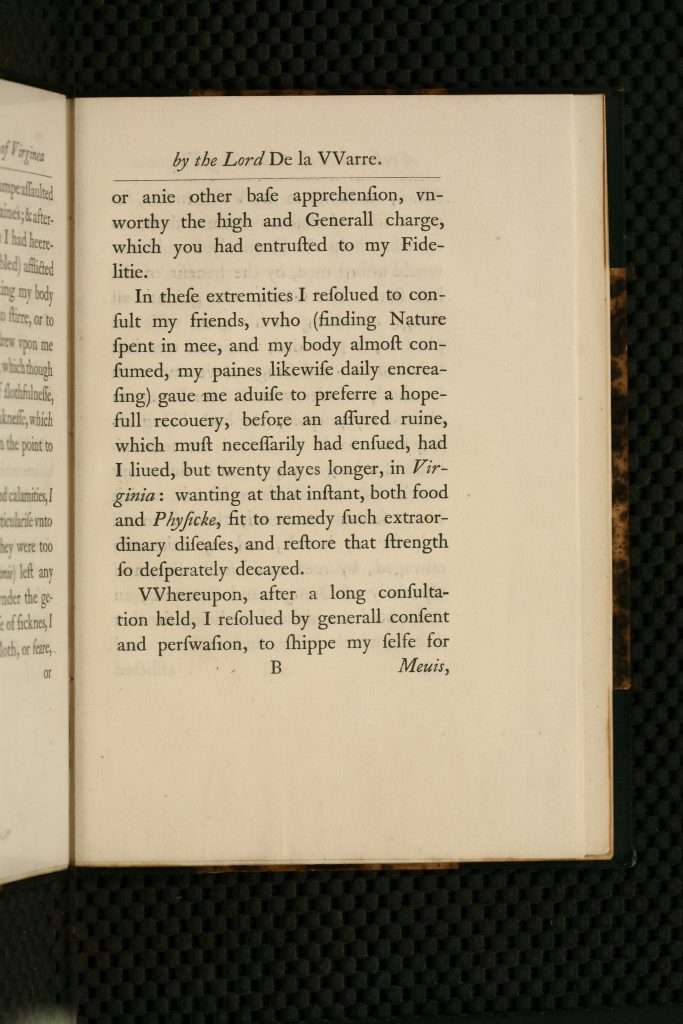 Relation of the Right Honourable the Lord De-La-Warre, Page 5

or anie other base apprehension, unworthy the high and generall charge which you had entrusted to my Fidelitie.

In these extremities I resolved to consult my friends, who (finding Nature spent in me, and my body almost consumed, my paines likewise daily encreasing) gave me advise to preferre a hopefull recovery, before an assured ruine, which must necessarily have ensued, had I lived, but twenty dayes longer, in Virginia: wanting at that instant, both food and Physicke, fit to remedy such extraordinary diseases, and restore that strength so desperately decayed.

Whereupon, after a long consultation held, I resolved by generall consent and perswasion, to ship my self for 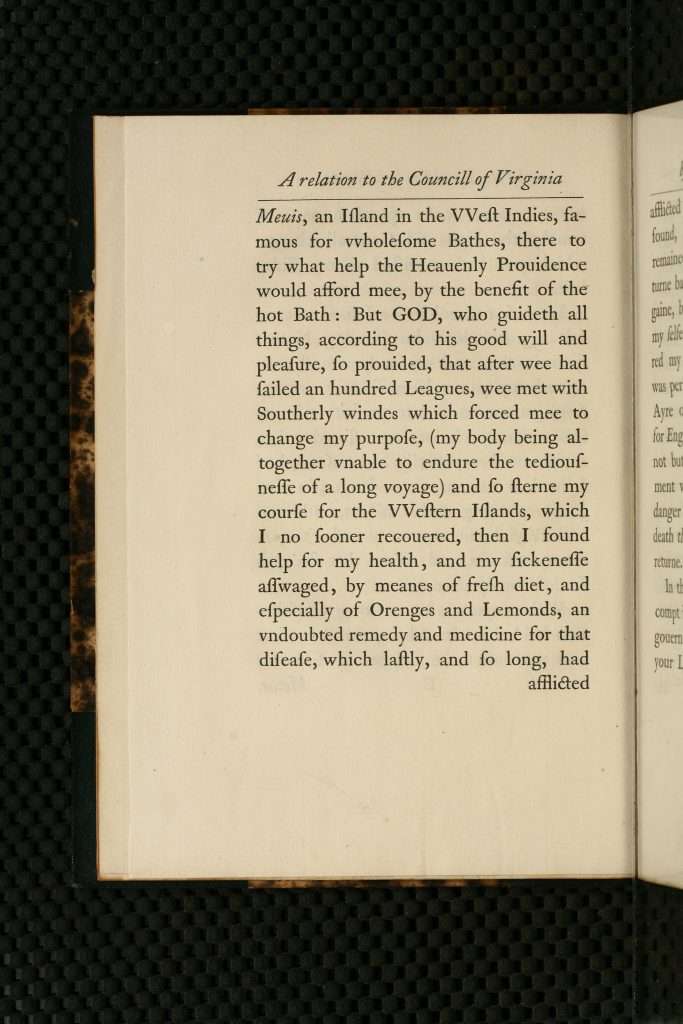 Relation of the Right Honourable the Lord De-La-Warre, Page 6

Mevis, an Island in the West Indies, famous for wholesome Bathes, there to try what help the Heavenly Providence would afford me, by the benefit of the hot Bathe: But GOD, who guideth all things, according to his good will and pleasure, so provided, that after wee had sailed an hundred Leagues, we met with Southerly windes which forced me to change my purpose (my body being altogether unable to endure the tediousnesse of a long voyage) and so sterne my course for the Western Islands, which I no sooner recovered, then I found help for my health, and my sicknesse asswaged, by meanes of fresh diet, and especially of Orenges and Lemonds, an undoubted remedy and medicine for that disease, which lastly, and so long, had 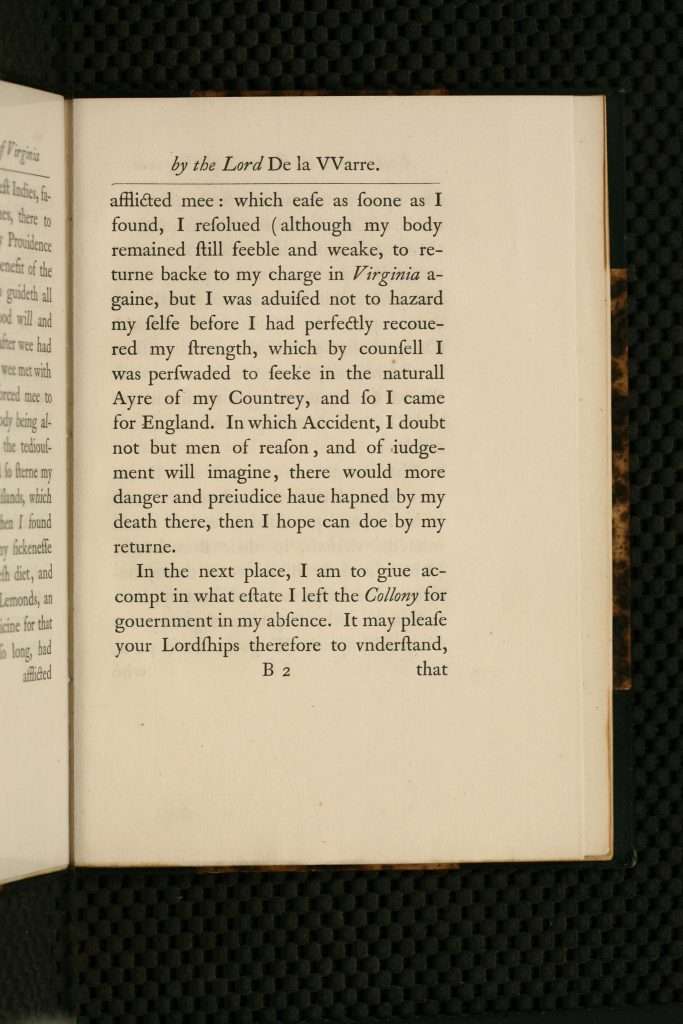 Relation of the Right Honourable the Lord De-La-Warre, Page 7

afflicted me: which ease as soone as I found, I resolved (although my body remained still feeble and weake), to returne backe to my charge in Virginia againe, but I was advised not to hazard my selfe before I had perfectly recovered my strength, which by Counsell I was perswaded to seeke in the naturall Ayre of my Countrey, and so I came for England. In which Accident, I doubt not but men of reason, and of judgement will imagine, there would more danger and prejudice have hapned by my death there, then I hope can doe by my returne.

In the next place, I am to give accompt in what estate I left the Collony for government in my absence. It may please your Lordships therefore to understand, 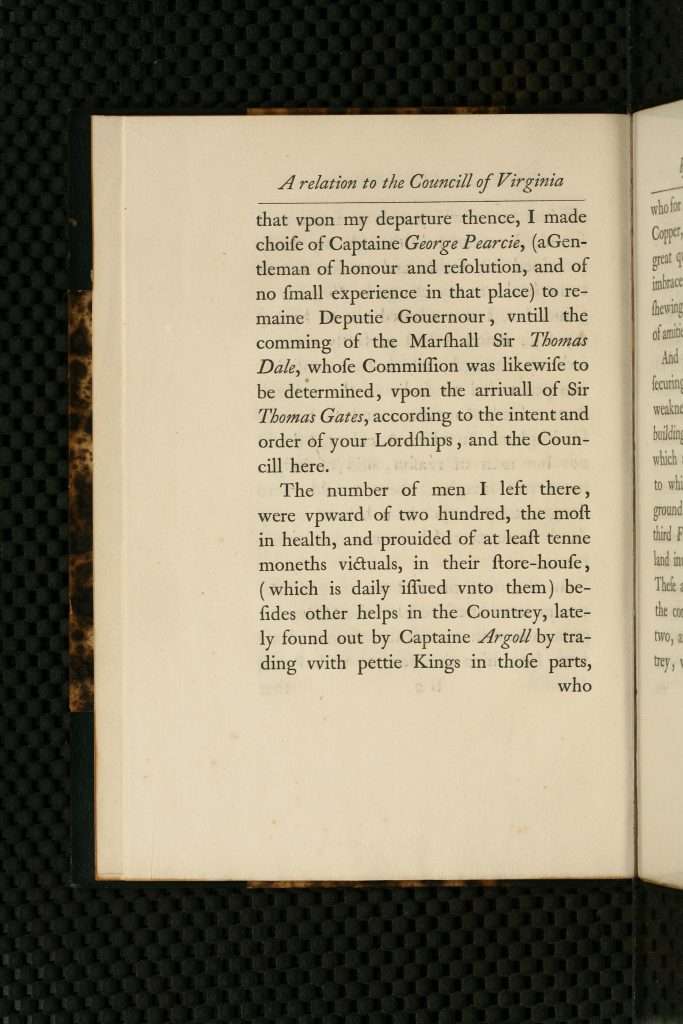 Relation of the Right Honourable the Lord De-La-Warre, Page 8

that upon my departure thence, I made choise of Captaine George Pearcie, (a gentleman of honour and resolution, and of no small experience in that place) to remaine Deputie Governour, untill the comming of the Marshall, Sir Thomas Dale, whose Commission was likewise to be determined, upon the arrivall of Sir Thomas Gates, according to the intent and order of your Lordships, and the Councill here.

The number of men I left there were upward of two hundred, the most in health, and provided of at least tenne moneths victuals, in their store-house, (which is daily issued unto them) besides other helps in the Countrey, lately found out by Captaine Argoll, by trading with pettie kings in those parts, 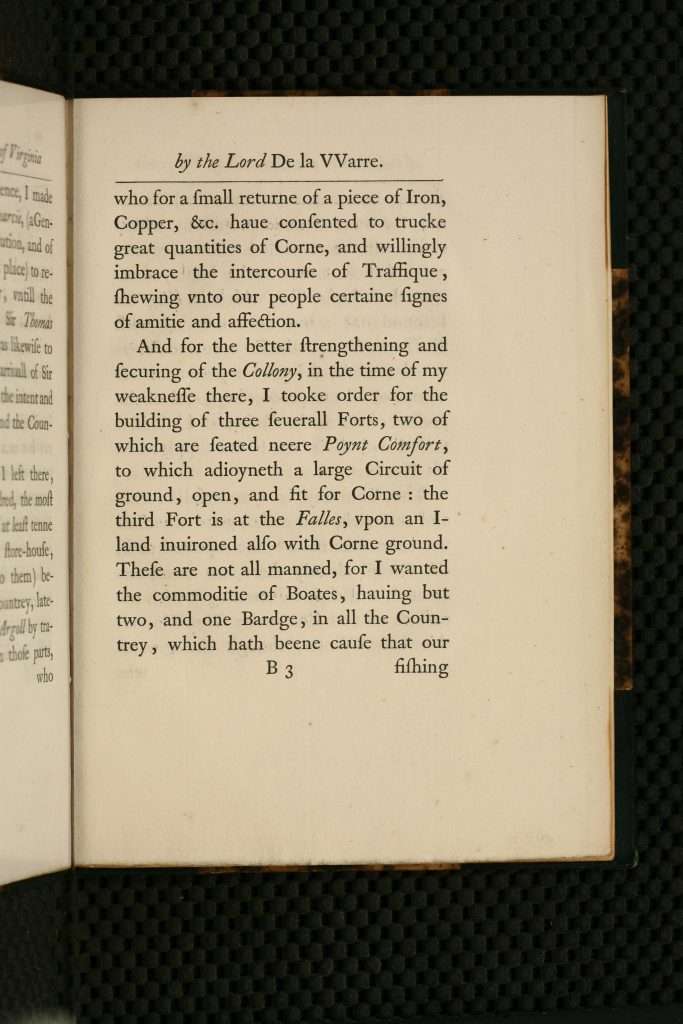 Relation of the Right Honourable the Lord De-La-Warre, Page 9

who for a small returne of a piece of Iron, Copper, & c. have consented to trucke great quantities of Corne, and willingly imbrace the intercourse of Traffique, shewing unto our people certaine signs of amitie and affection.

And for the better strengthening and securing of the Collony, in the time of my weaknesse there, I tooke order for the building of three severall Forts, two of which are seated neere Poynt Comfort, to which adjoyneth a large Circuit of ground, open, and fit for Corne: the thirde Fort is at the Falles, upon an Island invironed also with Corne ground. These are not all manned, for I wanted the Commoditie of Boates, having but two, and one Bardge, in all the Countrey, which hath beene cause that our 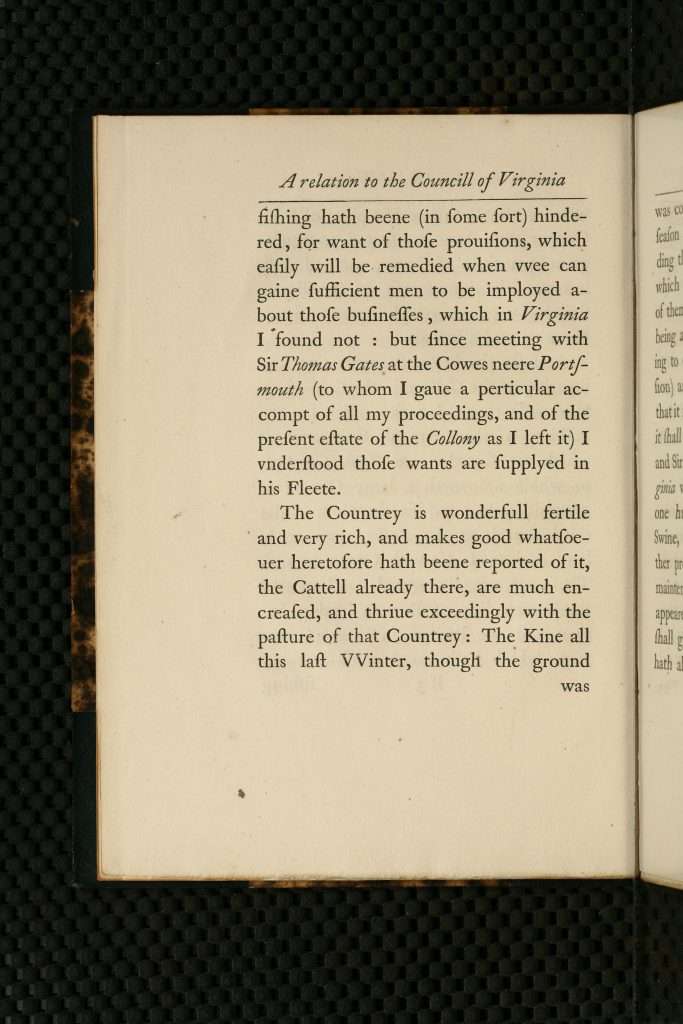 Relation of the Right Honourable the Lord De-La-Warre, Page 10

fishing hath beene (in some sort) hindered, for want of those provisions, which easily will be remedied when wee can gaine sufficient men to be imployed about those businesses, which in Virginia I found not: But since meeting with Sir Thomas Gates at the Cowes neere Portsmouth (to whom I gave a perticular accompt of all my proceedings, and of the present estate of the Collony as I left it) I understood those wants are supplyed in his Fleete.

The countrey is wonderfull fertile and very rich, and makes good whatsoever heretofore hath beene reported of it, the Cattell already there, are much encreased, and thrive exceedingly with the pasture of that Countrey: The Kine all this last Winter, though the ground 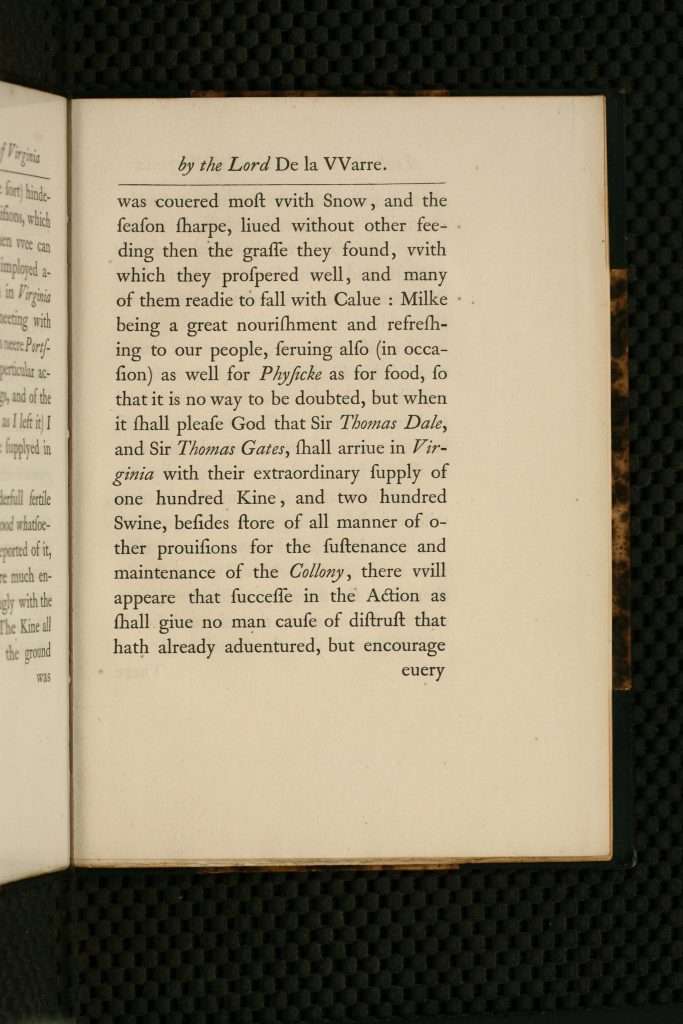 Relation of the Right Honourable the Lord De-La-Warre, Page 11

was covered most with Snow, and the season sharpe, lived without other feeding than the grasse they found, with which they prospered well, and many of them readie to fall with Calve; Milke being a great nourishment and refreshing to our people, serving also (in occasion) as well for Physicke as for Food, so that it is no way to be doubted, but when it shall please God that Sir Thomas Dale, and Sir Thomas Gates, shall arrive in Virginia with their extraordinary supply of one hundred Kine, and two hundred Swine, besides store of all manner of other provisions for the sustenance and maintenance of the Collony, there will appeare that successe in the Action as shall give no man cause to distrust that hath already adventured, but encourage 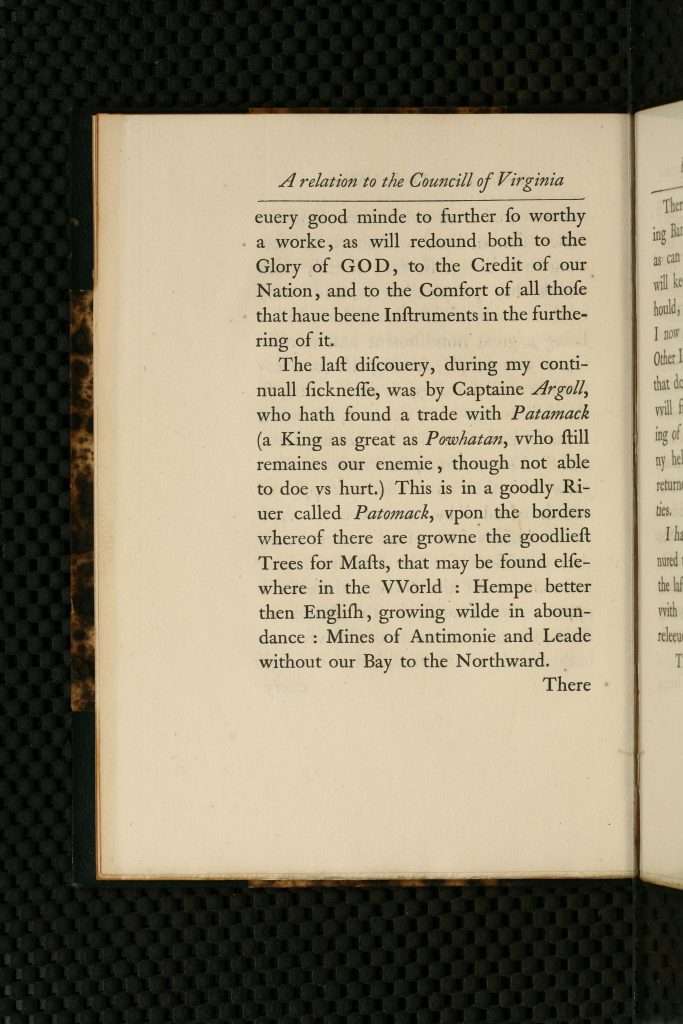 Relation of the Right Honourable the Lord De-La-Warre, Page 12

every good minde to further so worthy a worke, as will redound both to the Glory of GOD, to the Credit of our Nation, and to the Comfort of all those that have beene Instruments in the furthering of it.

The last discovery, during my continuall sicknesse, was by Captaine Argoll, who hath found a trade with Patomack (a King as great as Powhatan, who still remaines our enemie, though not able to doe us hurt). This is a goodly River called Patomack, upon the borders whereof there are growne the goodliest Trees for Masts, that may be found elsewhere in the World: Hempe better then English, growing wilde in aboundance: Mines of Antimonie and Leade. 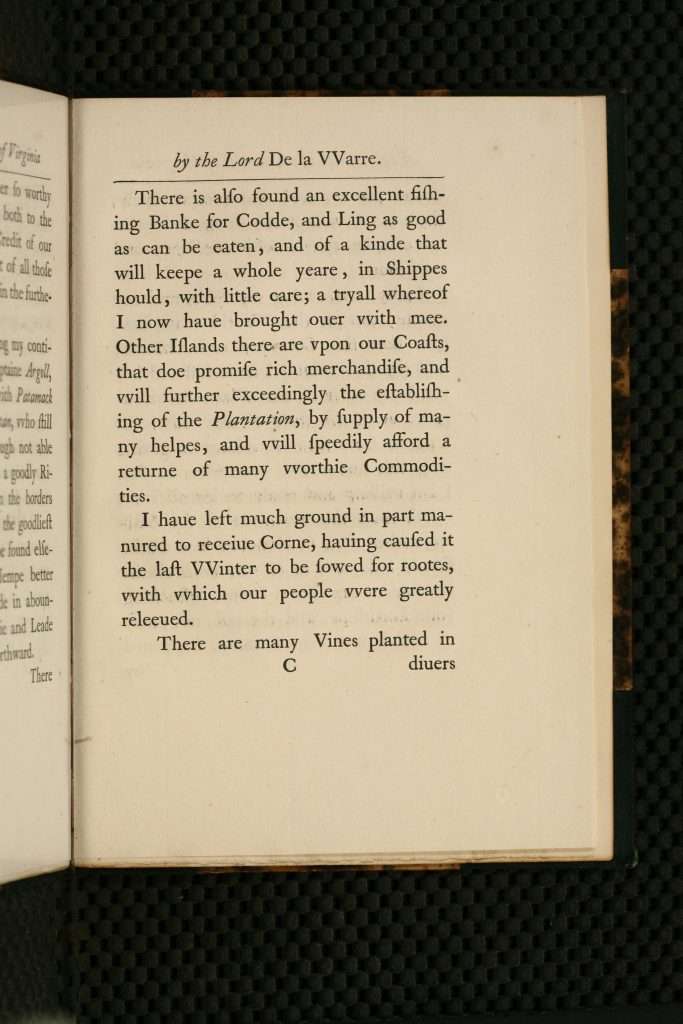 Relation of the Right Honourable the Lord De-La-Warre, Page 13

There is also found without our Bay to the Northward an excellent fishing Bancke for Codde, and Ling as good as can be eaten, and of a kinde that will keepe a whole yeare, in Shippes hould, with little care; a tryall whereof I now have brought over with mee. Other Islands there are upon our Coasts, that doe promise rich merchandise, and will further exceedingly the establishing of the Plantation, by supply of many helpes, and will speedily afford a returne of many worthie Commodities.

I have left much ground in part manured to receive Corne, having caused it the last Winter to be sowed for rootes with which our people were greatly releeved.

There are many Vines planted in 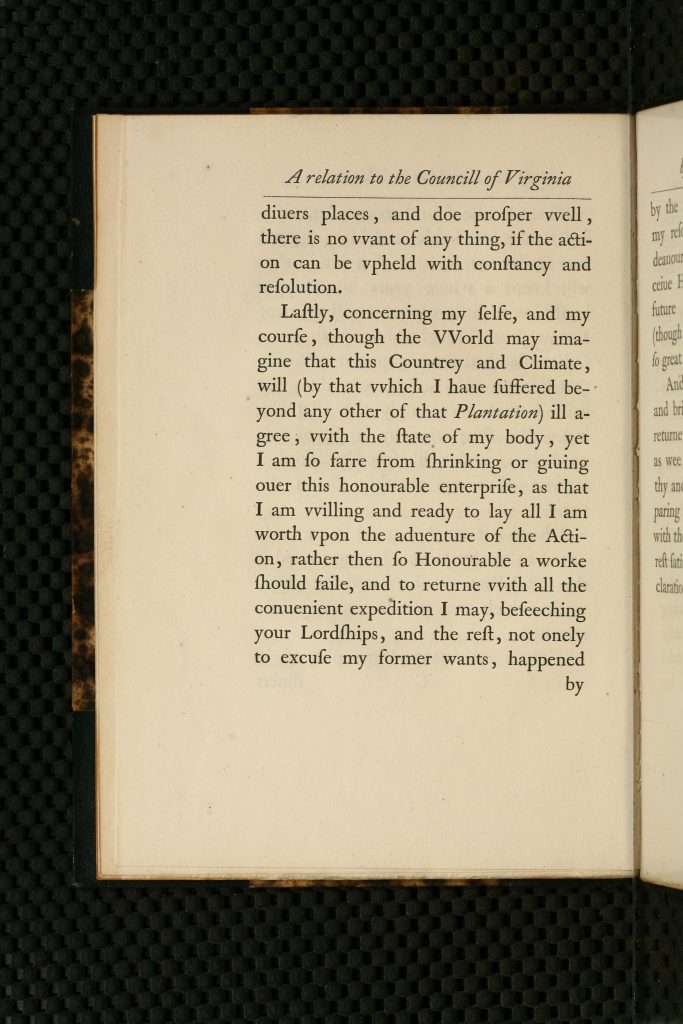 Relation of the Right Honourable the Lord De-La-Warre, Page 14

divers places, and doe prosper well, there is no want of any thing, if the action can be upheld with constancy and resolution.

Lastly concerning my selfe, and my Course, though the World may imagine that this Countrey and Climate will (by that which I have suffered beyond any other of that Plantation) ill agree with the state of my body, yet I am so farre from shrinking or giving over this honourable enterprise, as that I am willing and ready to lay all I am worth upon the adventure of the Action, rather then so Honourable a worke should faile, and to returne with all the convenient expedition I may, beseeching your Lordships, and the rest, not onely to excuse my former wants, happened 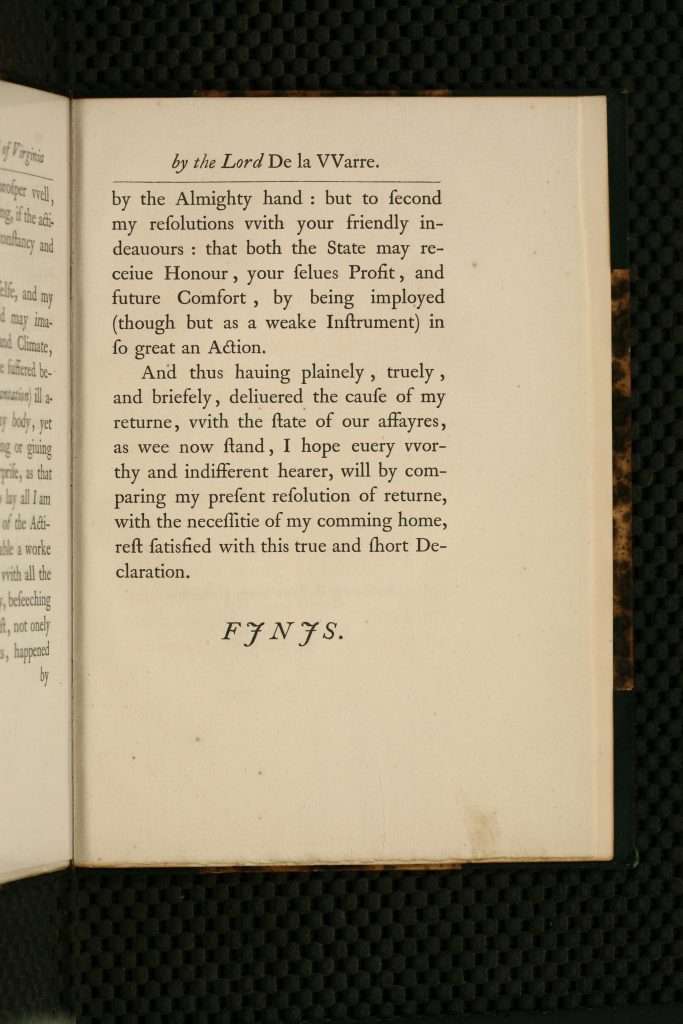 Relation of the Right Honourable the Lord De-La-Warre, Page 15

by the Almighty hand: but to second my resolutions with your friendly indeavours: that both the State may receive Honour, your selves Profit, and I future Comfort, by being imployed (though but as a weake Instrument) in so great an Action.

And thus having plainely, truely, and briefely, delivered the cause of my returne, with the state of our affayres, as wee now stand, I hope every worthy and indifferent hearer will by comparing my present resolution of returne, with the necessitie of my comming home, rest satisfied with this true and short Declaration.

RELATED CONTENT
Categories:
Type:
MAP
TIMELINE
June 25, 1611
Thomas West, twelfth baron De La Warr, addresses a letter to his superiors at the Virginia Company of London. He had left Virginia with plans to recuperate from illness in Bermuda, but a storm forced him west, eventually all the way to England.
CITE THIS ENTRY