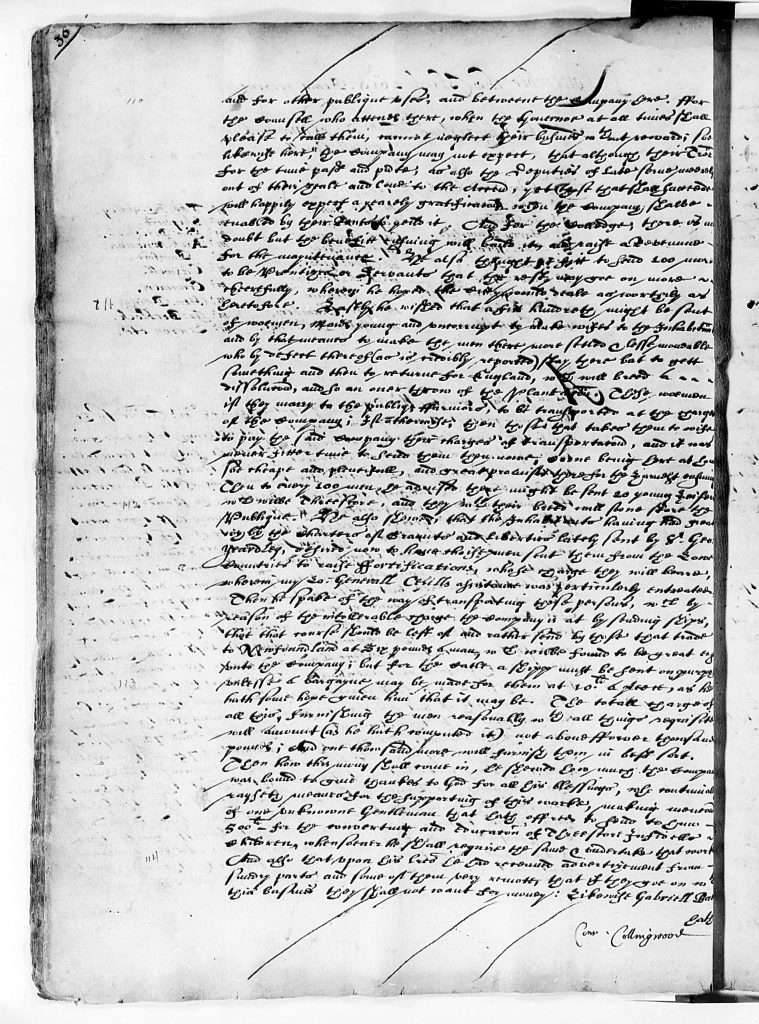 Lastly he wished that a fitt hundreth might be sent of woemen, Maid[s] young and vncorrupt to make wifes to the Inhabitant[s] who by defect thereof (as is credibly reported) stay there but to gett something and then to returne for England, wch will breed a dissolu[tion], and so an ouerthrow of the planta[tion]. These woemen if they marry to the publiq ffarmors, to be transported at the charges of the Company; If otherwise then those that takes them to wife to pay the said Company their charges of transporta[tion], and it was neuer fitter time to send them then nowe. 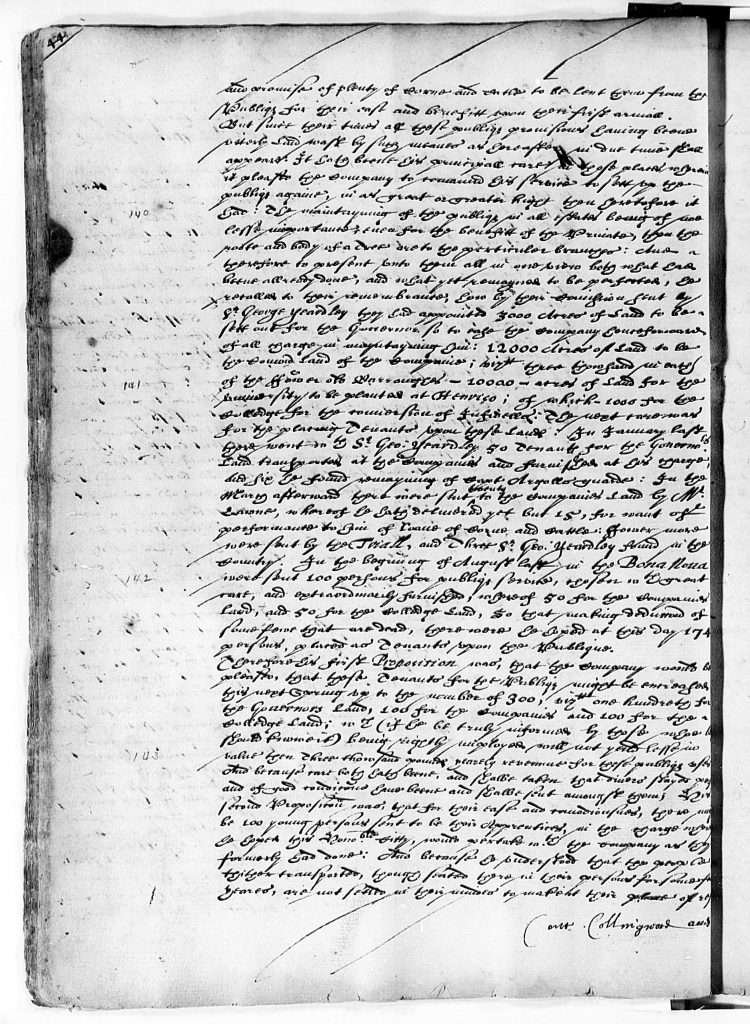 And because he vnderstood that the people thither transported, though seated there in their persons for some fewe yeares, are not setled in their mindes to make it their place of rest 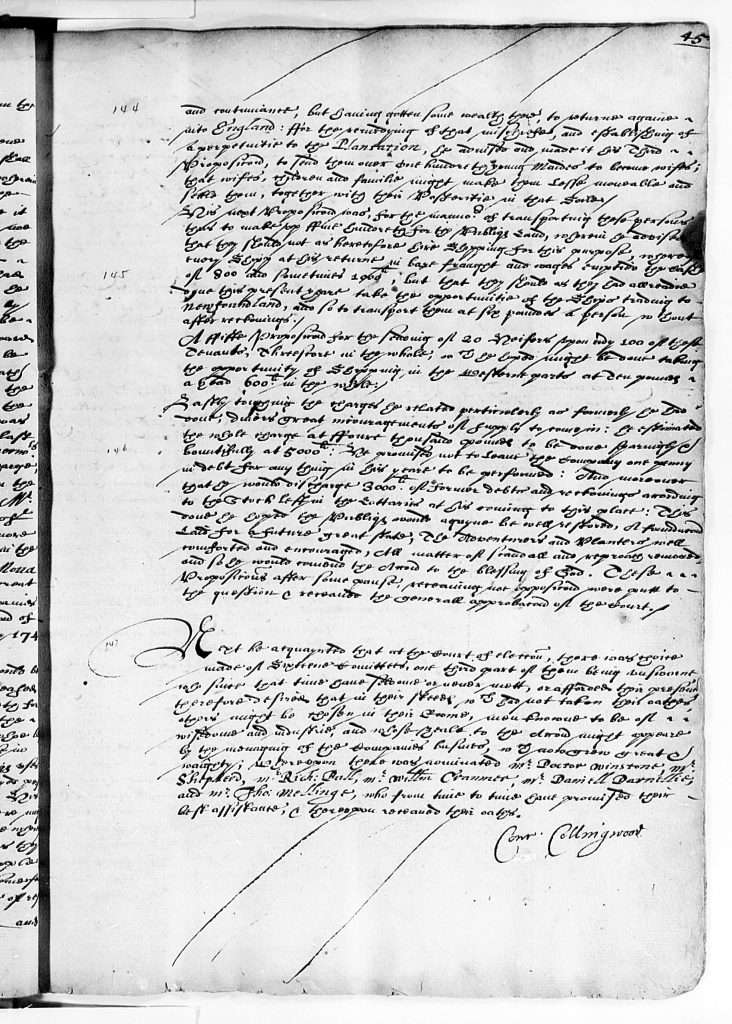 and continuance, but hauing gotten some wealth there, to returne againe into England: ffor the remedying of that mischiefe, and establishing of a perpetuitie to the Plantation, he aduised and made it his Third Proposi[tion], to send them ouer One hundreth young Maides to become wifes; that wifes, children and familie might make them lesse moueable and settle them, together with their Posteritie in that Soile. 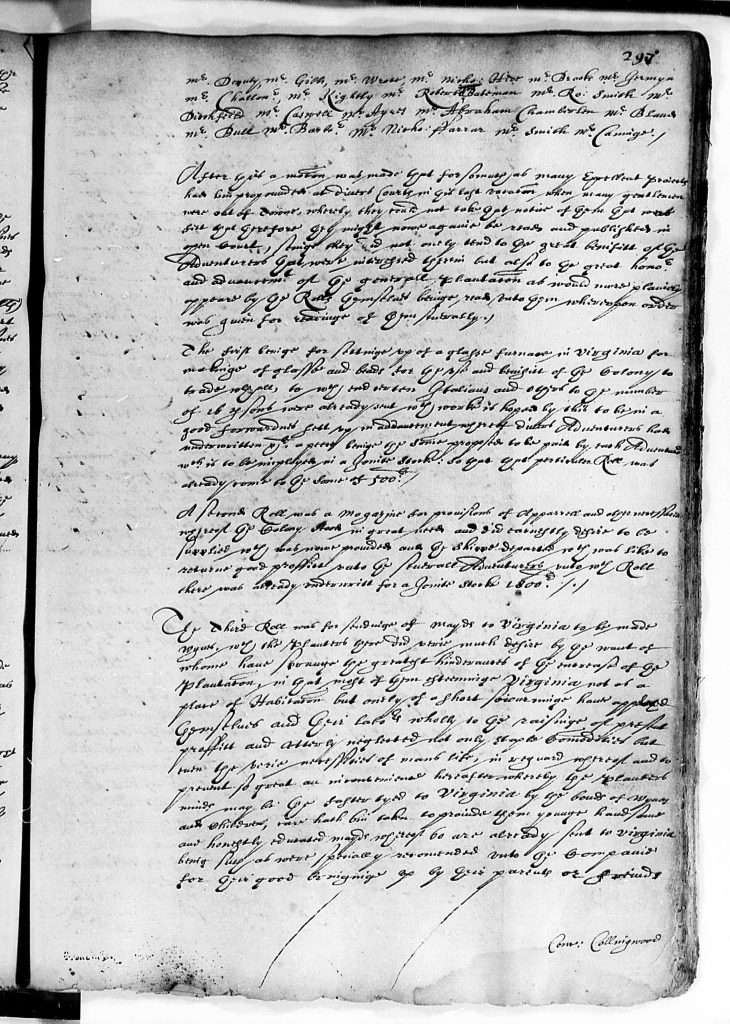 The Third Roll was for sendinge of May[des] to Virginia to be made Wyves wch the Planters there did verie much desire by the want of whome haue sprange the greatest hinderances of the encrease of the Planta[tion], in that most of them esteeminge Virginia not as a place of Habita[tion] but onely of a short soiourninge haue applyed themselues and their labors wholly to the raisinge of present proffitt and vtterly neglected not only staple Com[m]odities but euen the verie necessities of mans life, in reguard whereof and to preuent so great an inconvenience hereafter whereby the Planters mind[s] may be the faster tyed to Virginia by the bond[s] of wyues and Children, care hath bin taken to prouide them younge handsome and honestly educated mayd[es] whereof 60 are already sent to Virginia being such as were specially recomended vnto the Companie for their good bringinge vp by their parent[s] or friend[s] 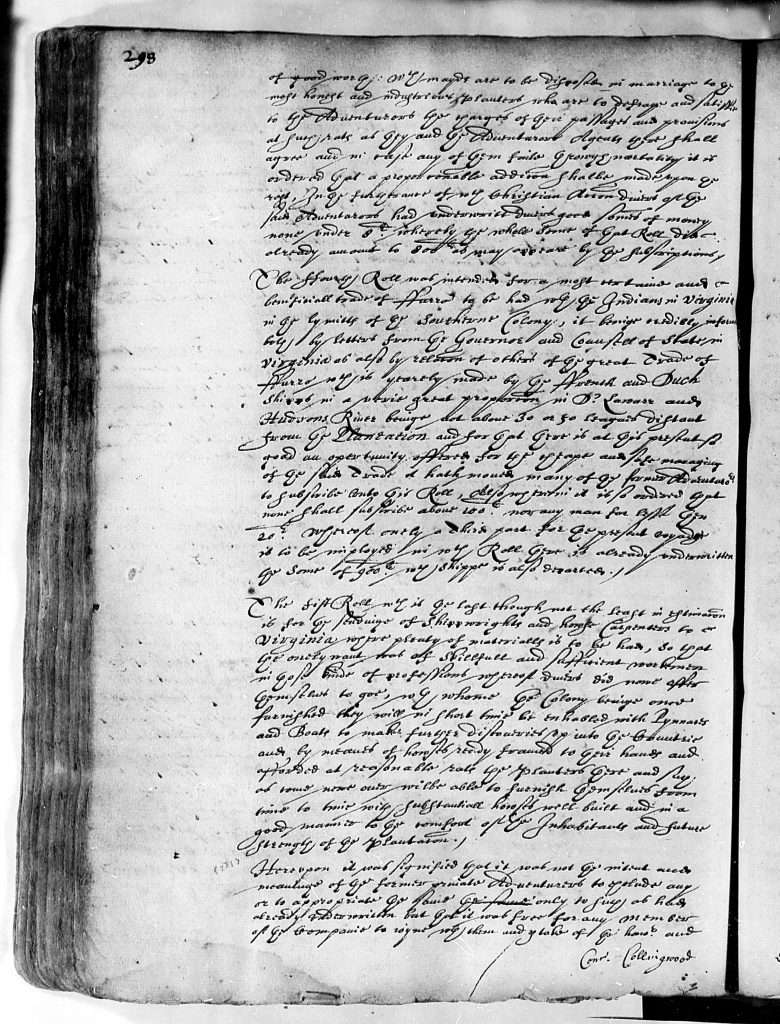 of good worth: Wch mayd[es] are to be disposed in marriage to the most honest and industrious Planters who are to defraye and satisfie to the Aduenturors the charges of their passages and prouisions at such rat[es] as they and the Aduenturors Agents there shall agree and in case any of them faile through mortality it is ordered that a propor[ti]onable addi[tion] shalbe made vpon the rest, In the furtherance of wch Christian Acc[tion] diuers of the said Adventurors had vnderwritt diuers good somes of money none vnder 8 [pounds] whereby the whole Some of the Roll did already amount to 800 [pounds] as may appeare by the subscriptions.

RELATED CONTENT
Categories:
Type:
MAP
TIMELINE
November 3, 1619-November 11, 1621
The Virginia Company debates and evaluates a proposal made by its treasurer, Sir Edwin Sandys, to ship 100 women to the colony in the hope that they would entice planters to remain in Virginia, and not return to England.
CITE THIS ENTRY