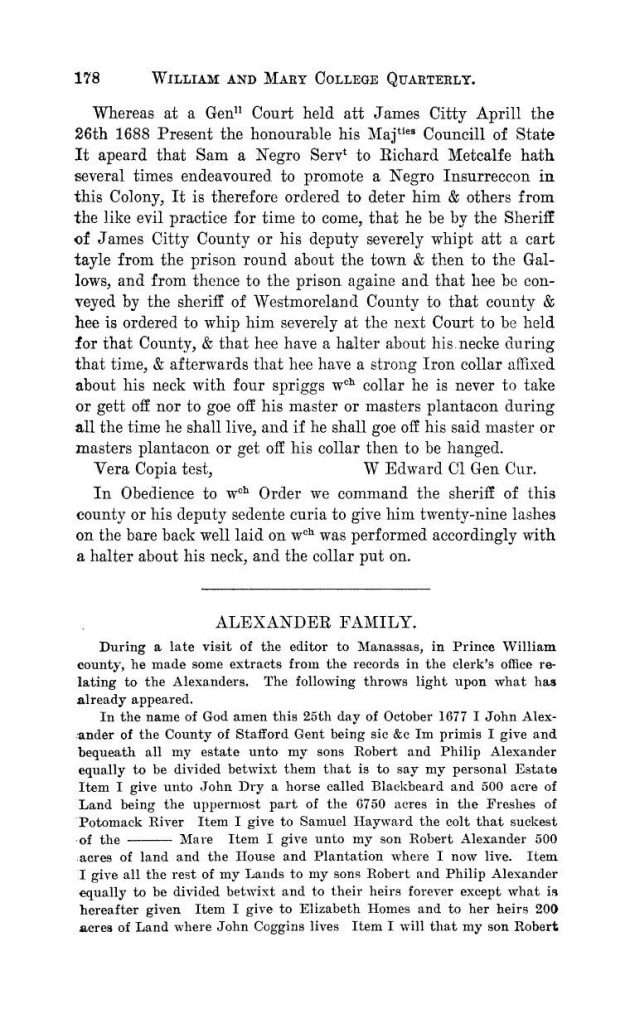 Whereas at a Generall Court held att James Citty Aprill the 26th 1688 Present the honourable his Majesties Councill of State It apeard that Sam a Negro Servant to Richard Metcalfe hath several times endeavoured to promote a Negro Insurreccon in this Colony, It is therefore ordered to deter him & others from the like evil practice for time to come, that he be by the Sheriff of James Citty County or his deputy severely whipt att a cart tayle from the prison round about the town & then to the Gallows, and from thence to the prison againe and that hee be conveyed by the sheriff of Westmoreland County to that county & hee is ordered to whip him severely at the next Court to be held for that County, & that hee have a halter about his necke during that time, & afterwards that hee have a strong Iron collar affixed about his neck with four spriggs which collar he is never to take or gett off nor to goe off his master or masters plantacon during all the time he shall live, and if he shall goe off his said master or masters plantacon or get off his collar then to be hanged.

In Obedience to which Order we command the sheriff of this county or his deputy sedente curia to give him twenty-nine lashes on the bare back well laid on which was performed accordingly with a halter about his neck, and the collar put on.